LOL, and it was Church that was Highway 11 south of Davenport, on that figure, not Yonge!

That's the problem with the highway numbers - they haven't been official this century, they frequently changed, and few remember the idiosyncrasies.

If you want to discuss Highway 10/Hurontario Street, go here:

Hurontario Street runs from Mississauga north to Collingwood. The southernmost and northernmost stretches followed (and still follow in part) Highway 10 and former Highway 24 respectively. The middle section, from Orangeville to Glen Huron, is bypassed, though it still exists, broken into...


If you want to discuss the transit project, stay here.
T

sixrings said:
Well I find it strange anyone still calls hurontario highway 10. Nothing about it screams highway and it just makes me think people are living in the past. I can understand people calling Rogers centre skydome because it’s fundamentally the same building with a corporate name attached. Hurontario looks vastly different today than what it did in the 90s yet alone the 50s.
Click to expand...

I think it boils down to the fact that with Hurontario, the road being a highway came first but with Yonge the street status came first and the number later.
What makes Hurontario so unique with the "highway" name with other streets that are sometimes called highways is it's built form; an old 1960s suburb with commieblock apartment buildings and strip malls. Definitely not the same as Highway 27 with ditches, a wide ROW, and few driveways or intersections.

Another thing is the city it runs through. Mississauga is a suburban city that was once a rural township. This fuels a persistent, anachronistic sense of place that gets passed on to young people and newcomers. To use another example; ever notice Markham Rd. is still labelled 48 north of Steeles?

Crews are installing micropiles - used to stabilize the overhead railway corridor - for when the push box that forms the underpass is put into place. Micropiling activities are currently ongoing and will continue until middle of February.

Crews are also planning on pushing the box closer to the tracks to enable them to install the Verona system at the beginning of February. The Verona system is the temporary structural supports that are used to stabilize the railway corridor as the box is pushed underneath. In order to install the Verona System micropiles need to be installed first. The box will likely be pushed into place this March and takes approximately 3 weeks.

https://blog.metrolinx.com/2021/10/27/see-the-launch-pad-completed-in-preparation-for-hurontario-light-rail-transit-push-box/
Due Time restriction, visit my site https://www.flickr.com/photos/drum118/ to see updated photos of projects shot the last few weeks since I don't have the time to post them to various threads.
See my videos on YouTube https://www.youtube.com/user/Transitdrum118

The storage area is the Cooksville GO Transit old parking lot on the east side of Hurontario. Odd place to store the rail that will be use first for the section south of 407 to Matheson first, since this will be the testing zone. Construction start this year and supposed to be before June. Construction north from Port Credit is supposed to be Q3 with construction Thanksgiving weekend for the QEW.
Due Time restriction, visit my site https://www.flickr.com/photos/drum118/ to see updated photos of projects shot the last few weeks since I don't have the time to post them to various threads.
See my videos on YouTube https://www.youtube.com/user/Transitdrum118

Jan 14/22
Only saw crews working for the 2 blocks south of Dundas as well the plaza in Port Credit and the rest looks the same.

Saw the many piles of rail in the storage area as I drove by and will try to get shot ln the next few days.

The roof of the box is pour with the scaffolding for it being remove. Still working in the trench south of the box.

Wonder if they will start track bridge work this weekend as none was done last weekend. 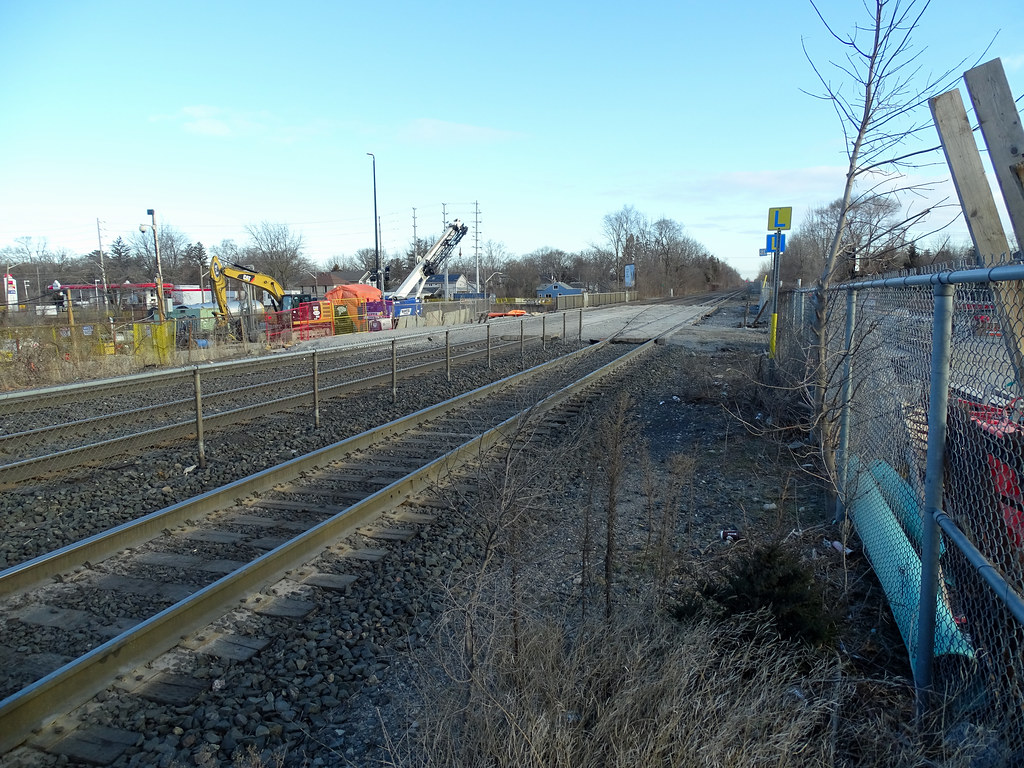 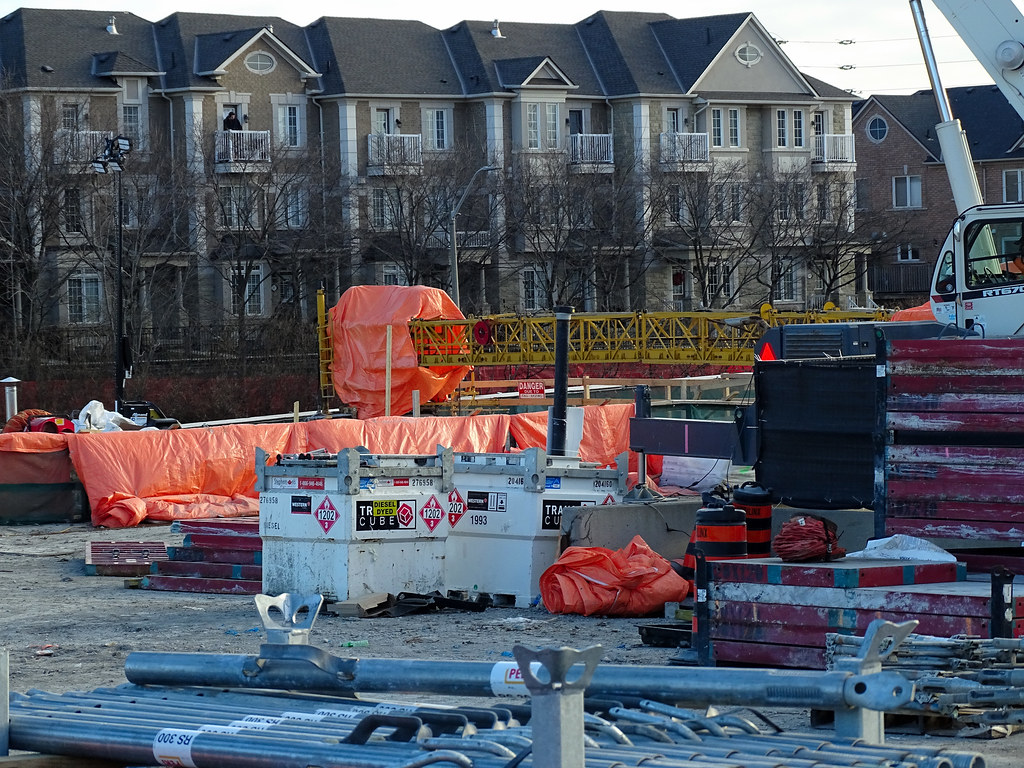 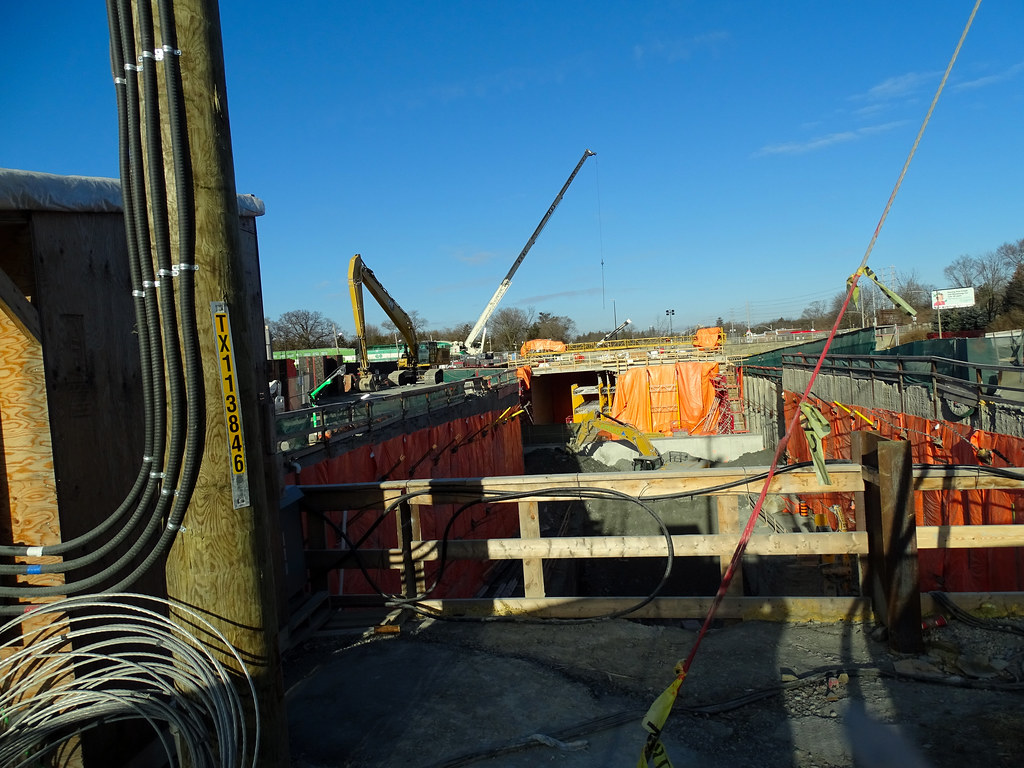 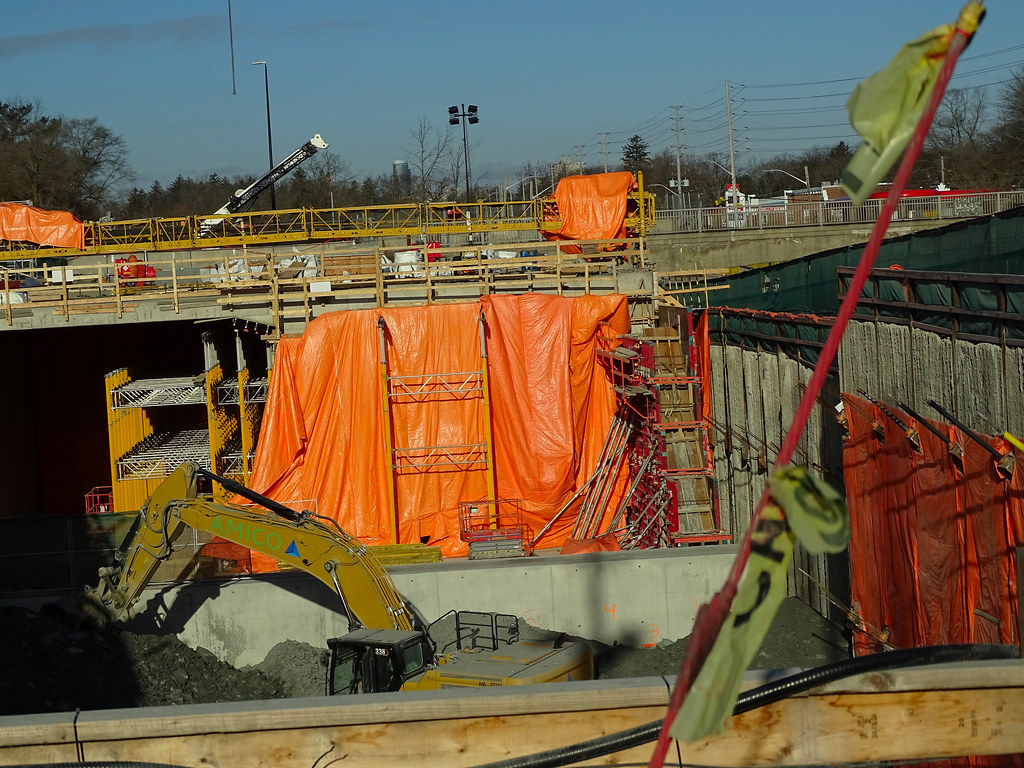 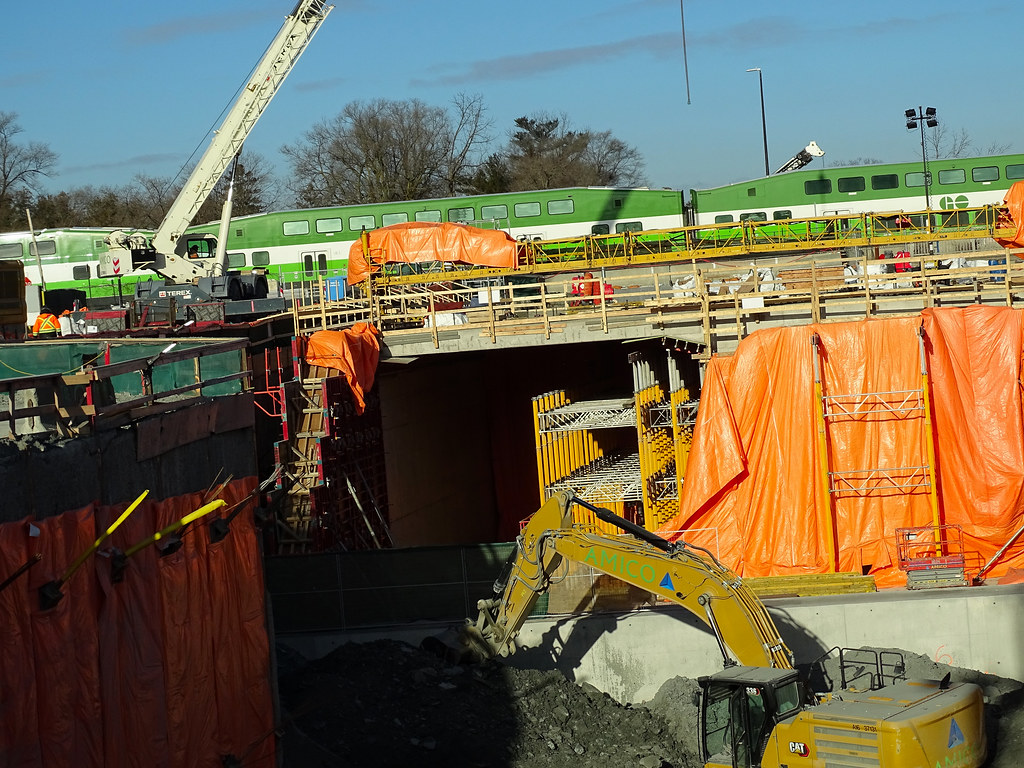 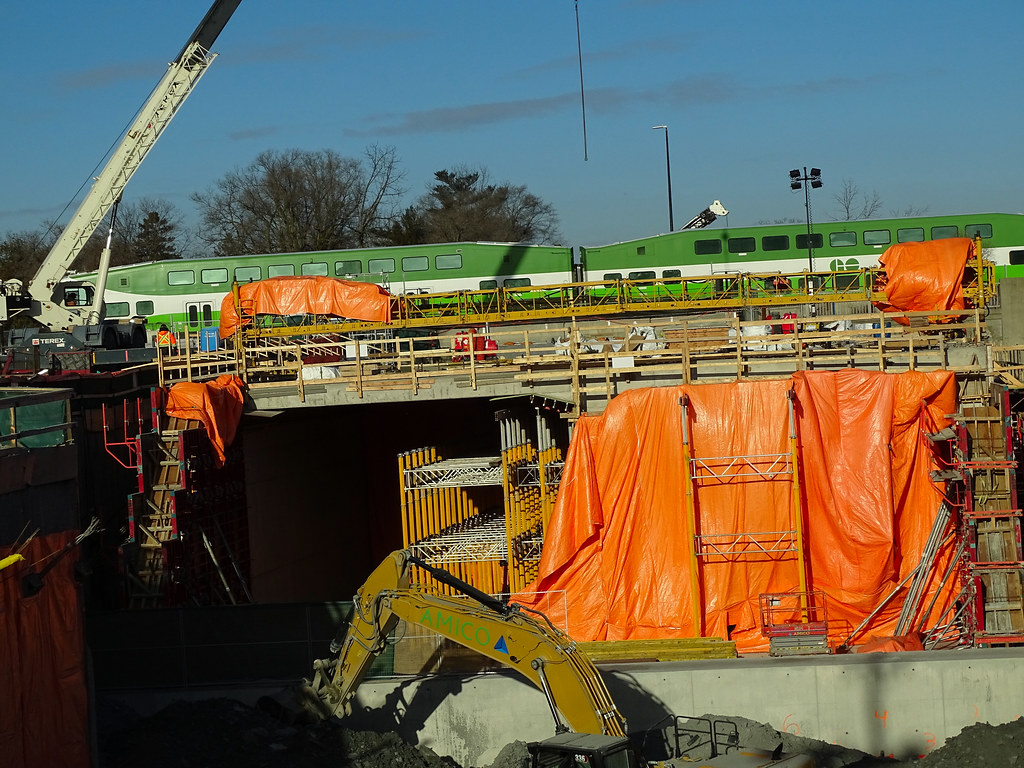 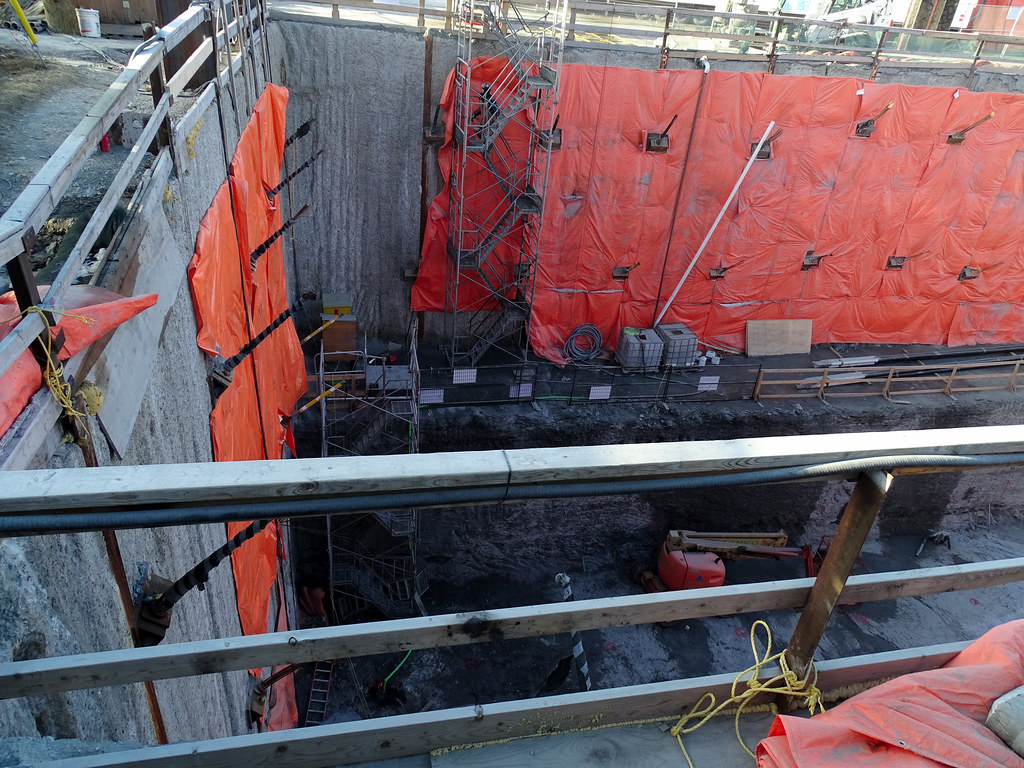 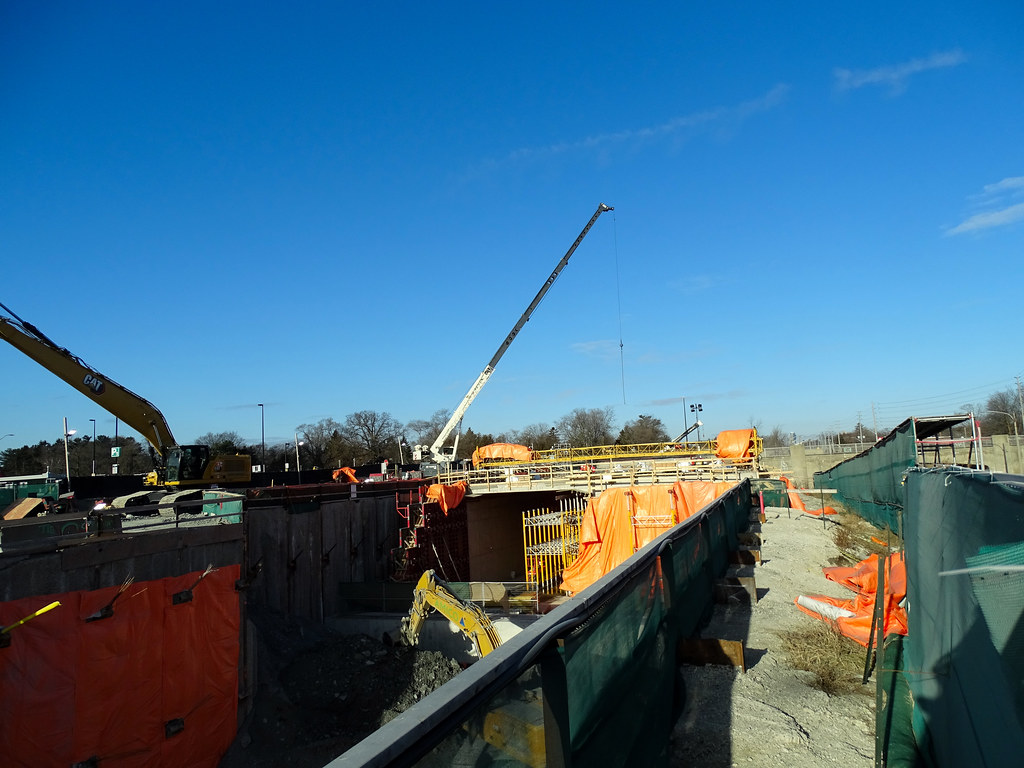 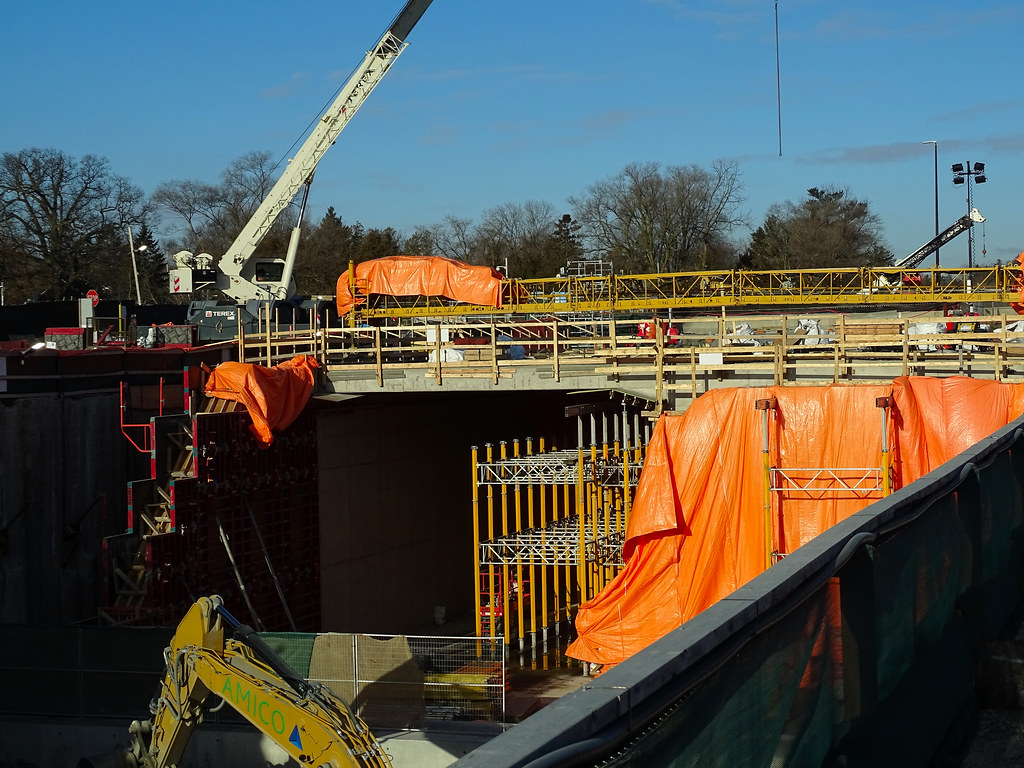 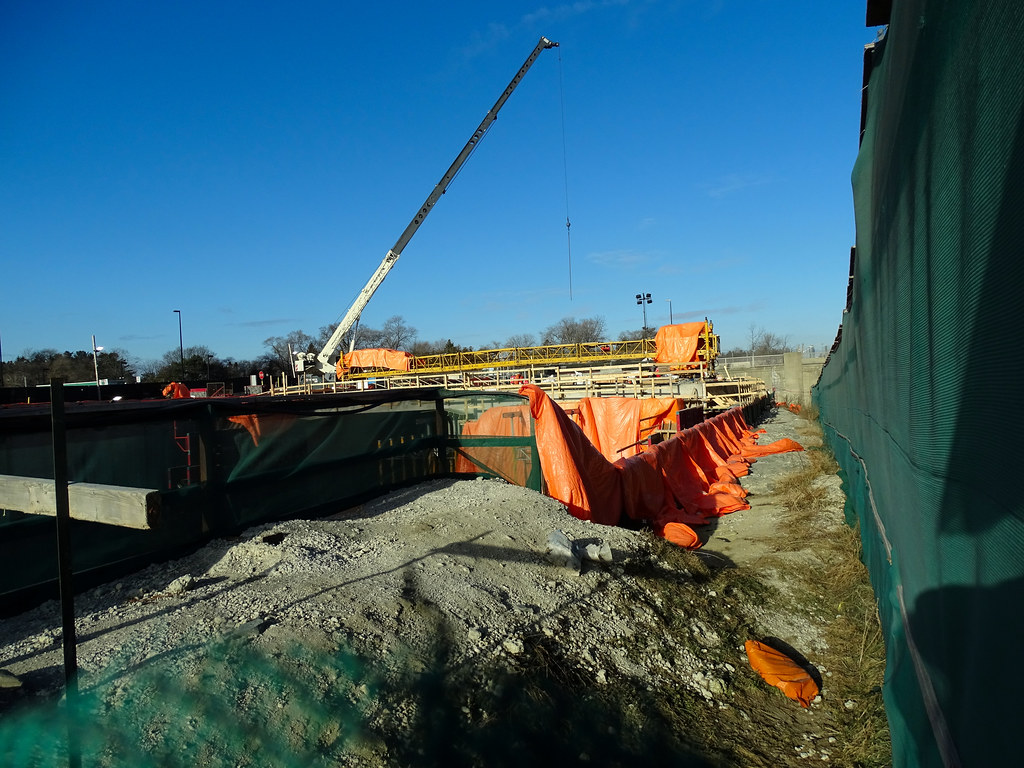 Jan 16
Stop by the Port Credit GO Station and saw no one or any indications any work was done this weekend closure. Weather may had an effect of seeing no work or what was to take place.

Stop by the storage yard where the rails are being store for the line. Still a stack of 3 pack rail that will be broken and place on piles of single T rail. There is no grove rail as noted by Metrolinx Blog.

Brief mention of LRT in this.

Peel Region staff did a report here on the Hurontario LRT (agenda here). It also covers the extension into downtown Brampton on Main Street.

Brief article about it in the Guardian. What’s the latest on the Hurontario Light Rail Transit plans? Here’s five things you should know

One aspect that was left out of the above article from the report was this:

This situation was actually covered in blog post here that was posted in this thread at the time. 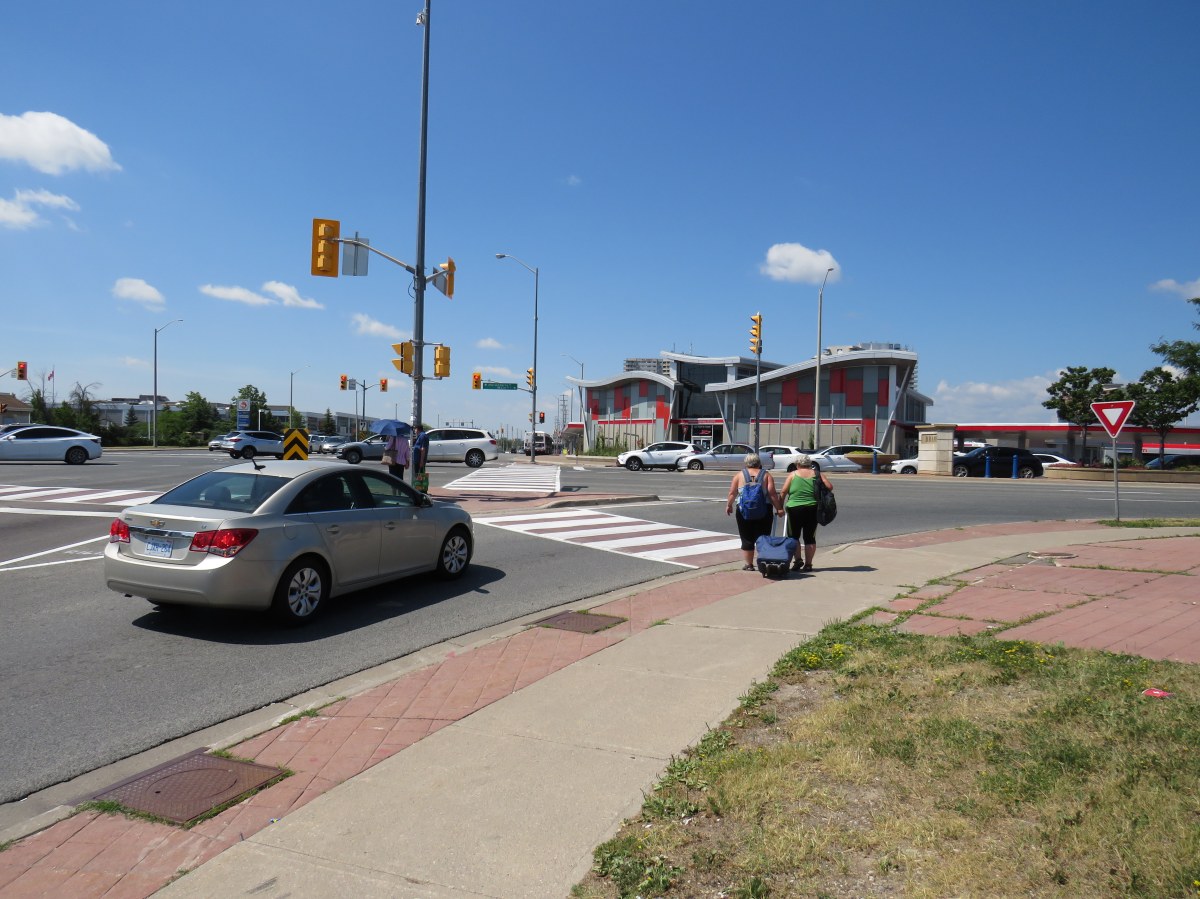 How Brampton commuters are caught in the middle at Steeles

Frustrated by Metrolinx’s responses to my questions about pedestrian safety at the northern terminus of the Hurontario LRT, I submitted an Access to Information request to the provincial agen…

Lots of activity at the MSF on a cold Saturday morning: 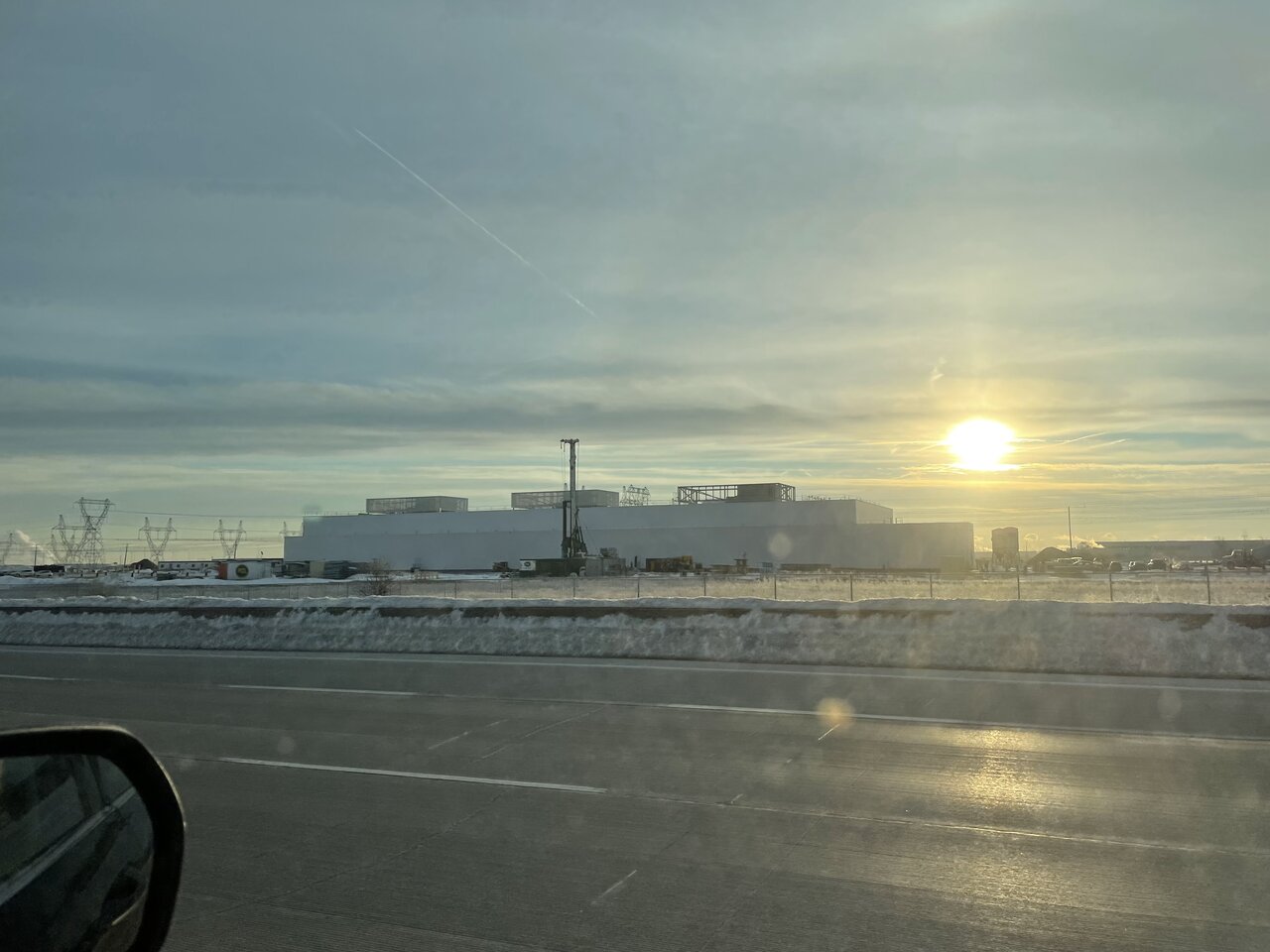 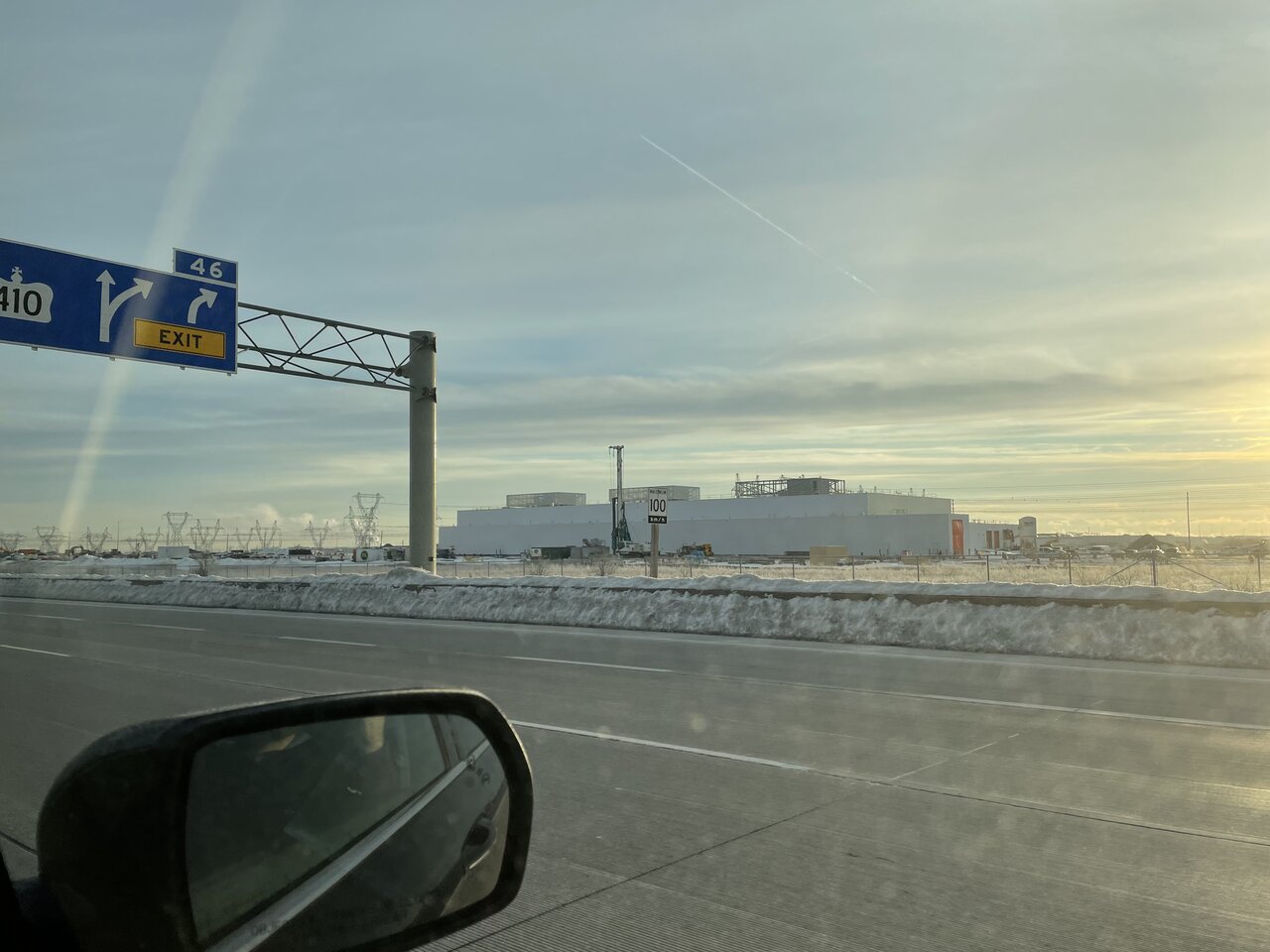 Looking back at this post and a little search revels that Highway 109 was renumbered from the eastern portion of Highway 5A!!! Line 5 on 5A

Is this caused by the LRT work or a problem cased by the weather??

I guess Transit will have to use King that will be a bitch going east and do walking transfers.

It been a bitch last week with Bell doing its thing with 2 Police cars at the south-west corner. More was taking place south of King.

Stay away and don't use transit for this area.

As it stands, first of the guideway will start by the end of Q1 at Top Flight as well to OMSF.. Track work for OMSF is to start late Q1.

Work on going for building the foundation and piers for the elevated section.

First LRV is to arrive late Q4 this year and been move up from 2023.

Hwy.401 underpass bridge rehabilitation taking place at night and odd considering it is less than 10 years old. No work on Hwy 407 and 403 bridge work that was schedule for Q1 nor when it will happen..

Key Metrics:
Once complete, the entire project will use:89 km rail weighing approximately 5000 metric tonnes
55, 000 Monoblock and Twin bloc ties
32 km of Rail Encapsulation
13,000 metric tonnes of rail ballast
47,000m3 Guideway Concrete
Deliveries:120 segments of rail have now been delivered to the OMSF and 360 to the laydown area adjacent to Cooksville GO.. Each segment of rail is 25m in length
73 concrete hydro poles installed along with 22 km of cable

Another tunnel box like Port Credit will be use for the QEW this year with the location for building it not finalize yet. Odd they are doing it this way.

When id comes time to build the Guideway, it will be 6' deep to allow a duct bank to be build first, a slab of concrete on top of it to support the rail.

The PC locals are up in arms over the lost of parking spots as well Metrolinx selling the Go Land to a developer. Then there is the issue of no parking garage with the building of the LRT that was shown as part of the station redevelopment. They think the parking structure is part of the LRT project when it was never was, The city opposed the 4 to 8 story structure and supposed more transit use than parking. The City only wanted 15 story towers and will be getting around 22 story now. The city is failing to delivery on transit regardless of COVID 19.

Both the Hurontario and the Dundas teams need to be working together now to deal with the rebuilding of the intersection as well the locations of the station platforms.
Due Time restriction, visit my site https://www.flickr.com/photos/drum118/ to see updated photos of projects shot the last few weeks since I don't have the time to post them to various threads.
See my videos on YouTube https://www.youtube.com/user/Transitdrum118
You must log in or register to post here.
Share:
Facebook Twitter Reddit Pinterest Tumblr WhatsApp Email Share Link