But this means that people from city centre if they take a lrt down to the waterfront will still have to walk a distance? Real good planning.
T

afransen said:
Making cyclists dismount is anti-cycling. The infrastructure should support people riding across the street as is natural.

A safety vest is not really necessary. You should have good lights, reflective tape and a bell.
Click to expand...

TBH, who actually dismounts in these circumstances?
A

innsertnamehere said:
Listening in to the council meeting - I'm counting 7 solid votes in support right now already early in the process. I would be very surprised if the vote fails today.
Click to expand...

Did you mean to post this in the Hamilton LRT thread?

Transportfan said:
TBH, who actually dismounts in these circumstances?
Click to expand...

Honestly, nearly no one. It is a bad idea to have laws on the books that are basically never observed.
Member since February 10, 2002

Rainforest said:
Mississauga Lakeshore line will likely be separate from the Toronto Lakeshore line. The benefit of running through service would be minimal, even if the gauge was same. Such a long line will be extremely hard to manage, and noone would travel end to end due to the trip time. Even today, few riders take the 501 all the way from Etobicoke to downtown. The 501's ridership in the west is mostly local, while the downtown-bound riders board further east, in places like Parkdale.

Mississauga Lakeshore line can just connect to the 501 at Long Branch, and those few riders who want to travel across the border can transfer there. In that case, no obstacles to using the standard gauge on both Hurontario LRT and Mississauga Lakeshore LRT.
Click to expand...

There is a push to have TTC run 501 to Mississauga Road which is eye rolling in the first place and would replace part of the line that did run into Mississauga in the past as well interurban line from Long Branch to Port Credit.

Most people would want to get to either Mississauga GO Stations, but you will find riders who cannot afford to use local transit and GO service due to lack of funds to do so. This is where riders will spend extra time travelling than doing the local hop on and off trips.

As for service, this becomes the big issue as well having 2 stations underground on both sides of Hurontario. You need 2 to deal with riders transferring from an east-west line for the lakeshore as well having service going in both direction off Hurontario unless you think going to Mississauga Rd is the only service coming off Hurontario,

Since the Port Credit LRT station is below grade, you need to go deeper going south of it to the lakeshore line. Going west on the Lakeshore, the line has to go deep to get under the the Credit River which will require a deep station in Port Credit compare to the rest of the line stations.
Due Time restriction, visit my site https://www.flickr.com/photos/drum118/ to see updated photos of projects shot the last few weeks since I don't have the time to post them to various threads.
See my videos on YouTube https://www.youtube.com/user/Transitdrum118

afransen said:
Honestly, nearly no one. It is a bad idea to have laws on the books that are basically never observed.
Click to expand...

Would the same reasoning apply to all way stop signs?
D

FineLine said:
I am actually surprised more cyclists aren't killed since a lot of them don't follow the rules of the road (or any rules for that matter). Do they not teach bicycle safety in school anymore? I was taught to dismount the bike to cross an intersection. Wear a helmet is also a good rule. For even better safety, wear a safety vest especially at night, dusk or dawn. You would be surprised how many cyclists wear black at night. I have seen a disturbing new trend along Eglinton Ave. and that is the amount of cyclists on the road when there is a perfectly good bike path completely separated from the road. Not sure why they would go on the road. Since I drive a commercial vehicle, I do change lanes to allow cyclists the full lane but there have been several times (downtown Toronto) when a cyclist in a bike lane darts out into my lane for no reason without looking. I think some people are trying to get killed and the speed won't make any difference.
Click to expand...

I agree with a lot of what you said, but not all of it. The reason cyclists don't go on trails next to roads sometimes is because they're poorly designed. A lot of times, they have harsh curbs and the button to cross is inconvenient for a cyclist to press. I used to have similar thoughts to you last year, when I rode a mountain bike. This year, I got a road bike, and now I completely get it. The curb bumps really hurt. Would drivers be ok with having speed bumps at every traffic light? The cross buttons are so far out of the way that I have to unclip, get off my bike, press the button, and come back and clip in most of the time. Then you have right turning vehicles that don't understand that I need time to clip in; I've been rushed by cars enough times and nearly fallen trying to clip back in at the start of the walk signal that a lot of the time, I feel safer passing through when there are no cars around. That's not right.

Your point about bikers not obeying laws (ex. not waiting their turn at stop signs), not having proper lighting at night, etc. are completely valid, and I wholeheartedly agree. I would add that we need regulations similar to German's StVZO (http://www.light-test.info/en/faq-en/169-stvzo-bike-lamps-regulations) as those obnoxious bright flashing lights need to stop. Car headlight beam patterns are closely regulated, but this is not the case with bicycle headlights, and you end up with a lot of bikers with no lighting or dangerously bright (1000lm+) conical shaped beams that resemble flashlights aimed straight into other driver's, cyclists, etc. eyes rather than illuminating the road.

One last thing I'd like to say is that "cyclists" aren't a very specific closed off group. Pretty much every cyclist I know is also a driver, pedestrian, etc. at other times. When I drive, I respect pedestrians and cyclists the same way I'd want to be respected when doing those activities. The point is to be courteous and safe, and that goes both ways. I don't mind slowing down and moving through a stop sign when it's safe to do so, but blowing through it and making everyone else wait when it's not your turn irritates me to no end.

If had just one wish for biking infrastructure it would be the abolishment of bike lanes denoted solely by paint. The next time some city planner says to Toronto works or whoever, let's put some paint on a road to give the suggestion of bike infrastructure I want someone to say, you know the law prohibits bike lanes marked solely by paint, so either we add bollards or hard separations, or this route is not a candidate for bike lanes and we must find another. Yes, I'd rather cycle without any bike lanes (like we did throughout the 1970s to 90s) than in ones without a hard separation.

It's time for a prohibition against painted bike lanes! https://archive.curbed.com/word-on-the-street/2019/5/10/18527503/bike-lanes-red-cup-project

Dupont at Lansdowne once got a Lego bike lane upgrade: 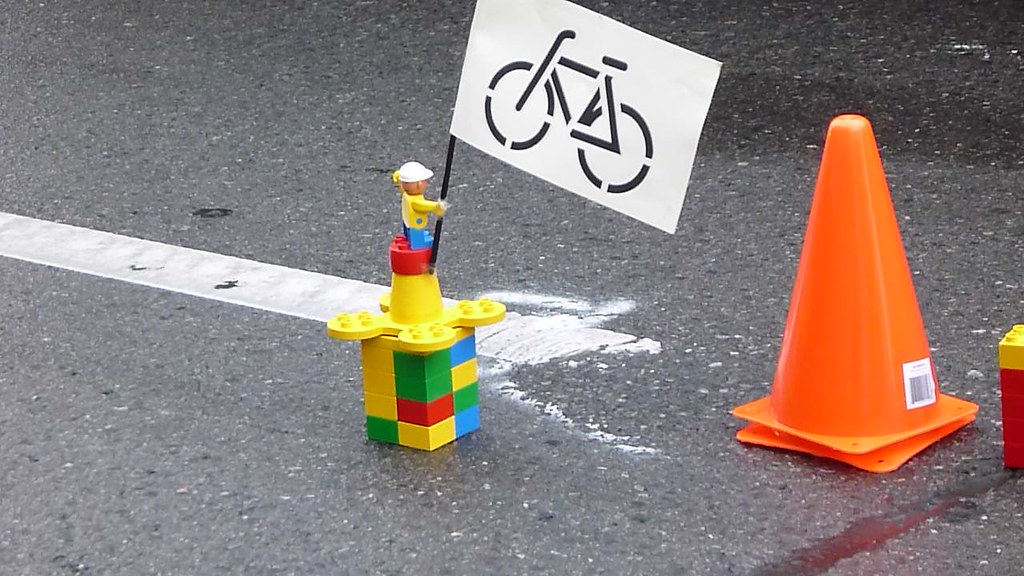 Undead said:
Would the same reasoning apply to all way stop signs?
Click to expand...

You mean Idaho stop? Yes, I think that's a good idea (for bikes). I am not a fan of four way stops, in general. They are not very safe.
Member since February 10, 2002
A

DtTO said:
I don't mind slowing down and moving through a stop sign when it's safe to do so, but blowing through it and making everyone else wait when it's not your turn irritates me to no end.
Click to expand...

To clarify, treating a stop sign as a yield (Idaho stop) does entail waiting your turn. It just means you don't have to come to a complete stop every time, when there is no other vehicle at the intersection when you arrive.
Member since February 10, 2002
T

Undead said:
Would the same reasoning apply to all way stop signs?
Click to expand...

But what's the point in demanding cyclists dismount for basically no reason?

afransen said:
To clarify, treating a stop sign as a yield (Idaho stop) does entail waiting your turn. It just means you don't have to come to a complete stop every time, when there is no other vehicle at the intersection when you arrive.
Click to expand...

In Paris, France, there are no STOP signs. They use either YIELD signs or traffic signal lights.

Did you know that there are no stop signs on Paris roads?​

Parisians aren’t renowned for their considerate driving, but it might just be because they don’t have the necessary street signage; Paris has no stop signs on any of its 6,100 streets. Why is this?

Whether its the hectic free-for-all that is the Peripherique or the utter chaos of the Etoile roundabout, driving in Paris is not for the most faint-hearted. Maybe it’s a natural side effect of the passion the city’s inhabitants put into their work, arts, culture and cuisine. But it might also have something to do with the fact there are no signs telling drivers to stop and check for oncoming traffic, an entirely normal sight in any other major city.

The city is perhaps the only major capital in the Western world that doesn’t have a single stop sign. Cars do not come to a full stop at any intersection without traffic lights. That wasn’t always the case.

Until a few years ago it had one, lonely sign at the exit of a construction facility driveway going onto the Quai Saint-Exupery in the 16th arrondissement. But in mysterious circumstances, that was removed some time between 2012 and 2014. The culprit (or hero) remains unclear, as does their motivation.

The explanation? Well, the car on the right always has the priority in Paris. But is a rule like that enough?

Does the fact that the only thing stopping collision after collision is a rule of thumb make Paris seem like a more dangerous place to drive? Not according to DEKRA, a German vehicle company which compiled road accident statistics from 2009 to 2012. According to its findings Paris is doing pretty well. Road fatalities are a third of London and a quarter of Rome, comparable cities. Good city planning trumps superior signage, it seems.
Click to expand...

W. K. Lis said:
In Paris, France, there are no STOP signs. They use either YIELD signs or traffic signal lights.

Did you know that there are no stop signs on Paris roads?​

Parisians aren’t renowned for their considerate driving, but it might just be because they don’t have the necessary street signage; Paris has no stop signs on any of its 6,100 streets. Why is this?