The existing buildings appear to be more significant than the new building from a design standpoint. If they were preserved, the contemporary architecture would have to respond to them and engage in a design dialogue, which would be more interesting than the sterile replacement design.

You could build the proposed hotel and demolish it 5 years later. No one would care from a design standpoint.

It seems that our front page story from a couple days ago (a scoop we ended up with when the ground level rendering included the hotel sign in it) has precipitated this official announcement now:

TORONTO (December 13, 2019) - sbe, the leading international hospitality group that develops, manages and operates award-winning brands, today announced it is bringing one of the hotel industry’s most influential hotels, New York’s iconic Hudson, to Toronto, Canada. Set to debut in 2024, the proposed 75,000 square foot project will be developed in partnership with Lamb Development Corp and IE Hospitality, featuring 146 rooms. Hudson Toronto will be a marquee addition to Toronto’s bustling King West community, the city’s vibrant entertainment and creative district. Surrounded by a lively art scene, glowing nightlife and buzzing entertainment venues, the hotel will feature an array of sbe’s premium culinary and nightlife experiences, including a rooftop restaurant, a three-meal signature restaurant, expansive bar and café, among other features to be announced.

“I am very proud to see the iconic Hudson Hotel take its legacy outside of New York in the cosmopolitan city of Toronto,” said sbe Founder & CEO Sam Nazarian. “This marks the beginning of the Hudson brand’s global expansion and continuation of its innovation and well-known fame. We couldn’t be prouder to work with Lamb Development Corp and IE Hospitality, the most respected and well-known industry leaders, on this project and appreciate the trust they’ve put in sbe to bring one of the hospitality world’s true originals to Toronto.” 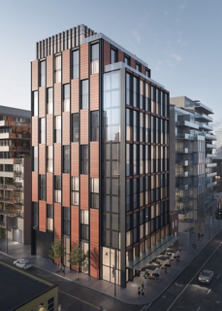 “This development will continue to showcase Toronto as a world-class city, boasting some of the best hotels globally. The Hudson Toronto will undertake to attract more tourism, economic development and culinary expertise to Toronto’s growing King West neighbourhood while also becoming a premiere destination for locals.” said AJ Manji, Managing Director of IE Hospitality.

“This hotel is going to be fantastic. Architecturally it is stunning. It is a 146 room standalone hotel i.e., no condos, so we will be focused 100% on hotel guests. Our rooftop bar/restaurant overlooks the park and the skyline. It’s going to be a hot ticket.” said Brad J. Lamb, Founder of Lamb Development Corp.
Located at 445 Adelaide St West, the hotel will be in the heart of Toronto’s King West community and immediately adjacent to St. Andrews Park. There are potential city plans to expand the park into a giant green space and urban playground for all ages. Known as a hotspot for wellness, food and entertainment, King West is attracting a range of urbanites, businesses and innovative commercial projects.

The design team, for the Hudson Toronto features some of the biggest names in architecture and design, including award-winning, internationally recognized lead architect Peter Clewes, architects Alliance.

Known for a deep commitment to city-building and sustainable growth that’s evident in all his projects, Peter brings a unique, forward-looking perspective to shape the Hudson Toronto with a striking, culturally relevant design.

Leading the interior design will be one of Canada’s most preeminent and recognized design studios, The Design Agency. The internationally celebrated agency brings decades of experience and design excellence to the project, with more than 20 years of projects taking shape throughout 26 cities and nine countries. The agency is tasked with creating special interior environments through unique narratives.

The Hudson is part of sbe’s collection of luxury boutique hotels, the House of Originals, which consists of trailblazing properties that have set a standard for hospitality and experience that makes each hotel iconic in its own right. For every hotel in this collection, there is an undying spirit and promise of originality. Other House of Originals properties include the Sanderson and St. Martins Lane in London, 10 Karaköy in Istanbul, and the Shore Club in Miami Beach.

The Hudson Toronto is an integral part of sbe's global expansion plan across all sbe hotel brands from SLS, Delano, The House of Originals, Mondrian and Hyde, in key global cities from Paris to Dubai and Buenos Aires to Mexico City, to mention a few.

The project is subject to municipal approvals with hearings scheduled for Spring 2020.

Established in 2002 by Founder and CEO Sam Nazarian, sbe is a privately-held, leading lifestyle hospitality company that develops, manages and operates award-winning hotels, residences, restaurants and nightclubs. Through exclusive partnerships with cultural visionaries, sbe is devoted to creating extraordinary experiences throughout its proprietary brands with a commitment to authenticity, sophistication, mastery and innovation. Following the acquisition of Morgans Hotel Group, the pioneer of boutique lifestyle hotels, in partnership with Accor, sbe has an unparalleled global portfolio which will see 29 hotels and over 180 global world-renowned culinary, nightlife and entertainment venues by the end of 2019. The company is uniquely positioned to offer a complete lifestyle experience - from nightlife, food & beverage and entertainment to hotels and residences, and through its innovative customer loyalty and rewards program, The Code, as well as its award-winning international real estate development subsidiary, Dakota Development - all of which solidify sbe as the preeminent leader across hospitality. The company's established and upcoming hotel brands include SLS Hotel & Residences, Delano, Mondrian, The Redbury, HYDE Hotel & Residences, and The House of Originals. In addition, sbe has the following internationally acclaimed restaurants and lounges under subsidiary Disruptive Restaurant Group: Katsuya by Chef Katsuya Uechi, Umami Burger, Cleo, Fi'lia, Carna by Dario Cecchini, Leynia and Diez y Seis by Chef José Icardi, HYDE Lounge, S Bar, Doheny Room, Nightingale, Skybar, Bond, and Privilege. To learn more, visit sbe.com.

About Impact Equity and IE Hospitality

IE Hospitality is the hospitality division of Impact Equity. Founded in 2015 Impact Equity, began with the vision to transform the landscape of communities in a long lasting impactful way through investing in commercial properties centered in and around Toronto's urban core.
Their portfolio of world class, retail-oriented properties has been strategically acquired by investing in pre-construction, allowing for the hand in hand collaboration with Industry leading developers such as Lamb development Corp, along with architects, and engineers to create efficient, functional, and character driven spaces.
IE Hospitality is new division developing lifestyle hotels, that are catered for the next generation of entrepreneurs and creative minds.
The core values of IE hospitality revolve around delivering design forward concepts focused on service and delivering memorable guest experiences.
To learn more, visit http://impactequity.ca
claditor spandrelgrise!

Lots of terracotta with this one.

mcornett said:
I don't care if it's an improvement, or even if it's a nice building. Where is the heritage preservation? It is such bullcrap that beautiful buildings from 1880 and 1904 would just be demolished because somebody is too lazy to design around them. Era should be ashamed of their "heritage impact statement".
Click to expand...

Accor Hotels and American SBE are behind this disgusting proposal to demolish historic buildings that were built even before the Royal York Hotel.

Kingsett owns the RY. Accor is the operator.
Twitter

I stayed at the Hudson in NY (when it was run by Ian Schrager/Morgans Group) and it’s one of my favourite hotels.
It‘s too bad it won’t have Philipe Starck-designed interiors whose whimsical innovative design really sets the feel and atmosphere of SBE’s hotels. Having it designed by an renowned international designer would bring the hotel a lot of value and notoriety, IMO.
O

ProjectEnd said:
Kingsett owns the RY. Accor is the operator.
Click to expand...

mcornett said:
I don't care if it's an improvement, or even if it's a nice building. Where is the heritage preservation? It is such bullcrap that beautiful buildings from 1880 and 1904 would just be demolished because somebody is too lazy to design around them. Era should be ashamed of their "heritage impact statement".
Click to expand... 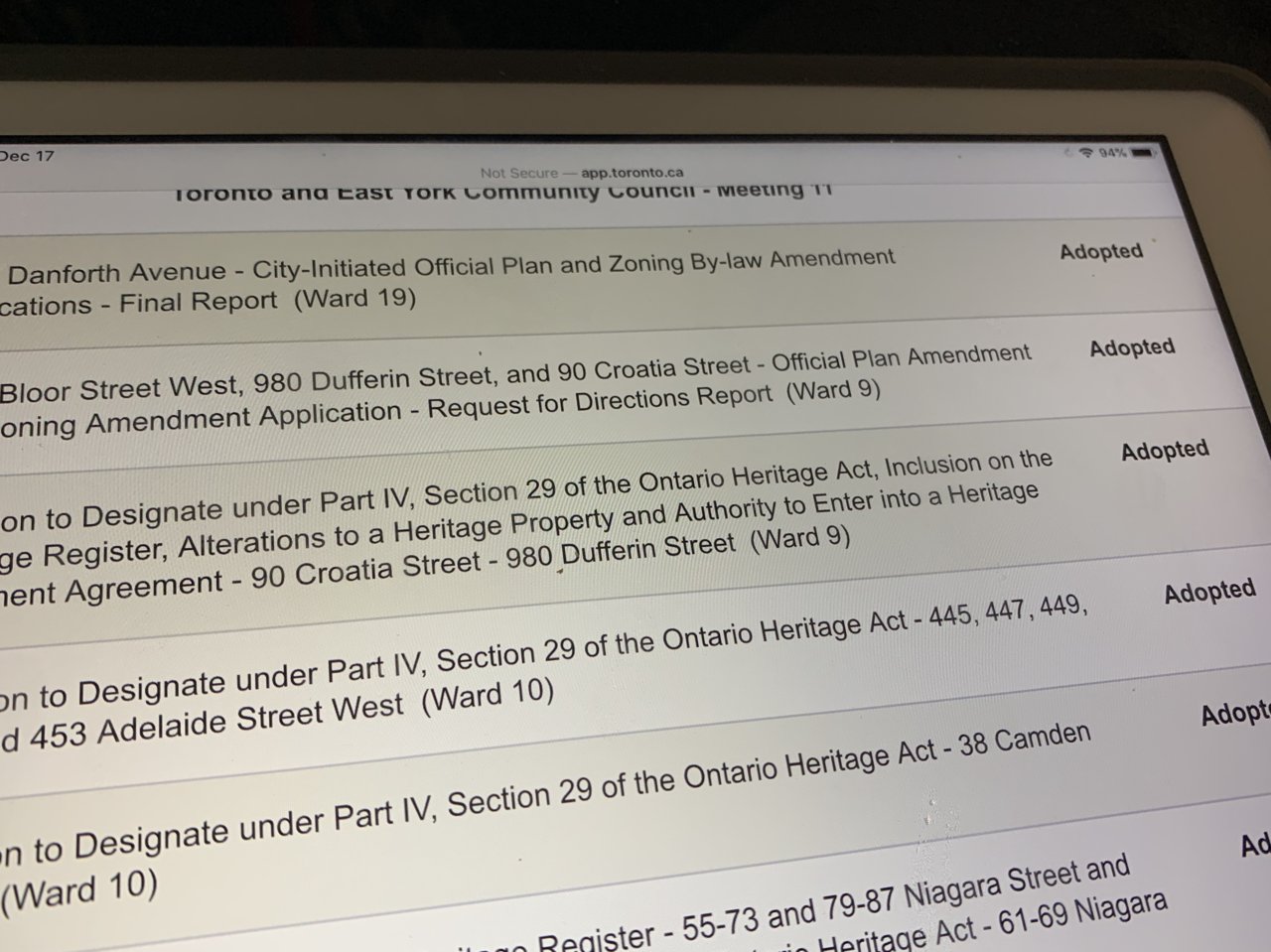 How is it ok to cast Net New Shadow on the park for all those hours?!! September and March show new shadows from 10 am to past 3pm!
A

lmazhari said:
How is it ok to cast Net New Shadow on the park for all those hours?!! September and March show new shadows from 10 am to past 3pm!
Click to expand...

That's one reason it's at the LPAT. Heritage is another.
S

According to Brad Lamb (via Instagram) this has been approved by the city, with construction to begin in 2021.
T

The NRU states that this was approved today as well. The decision is probably somewhere on Canlii if someone wants to look it up.

basically the board thought the height was fine and thatthe existing buildings weren’t worthy of a heritage designation.

Here's the text of the decision: