I couldn't find another thread about this: 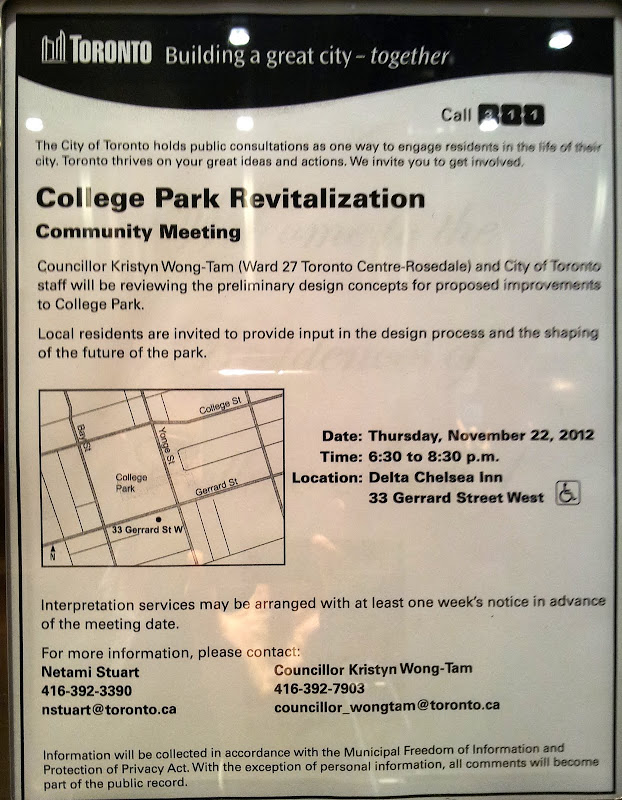 Yes, I wish I could attend. Hopefully someone here will let us know a few details afterwards. 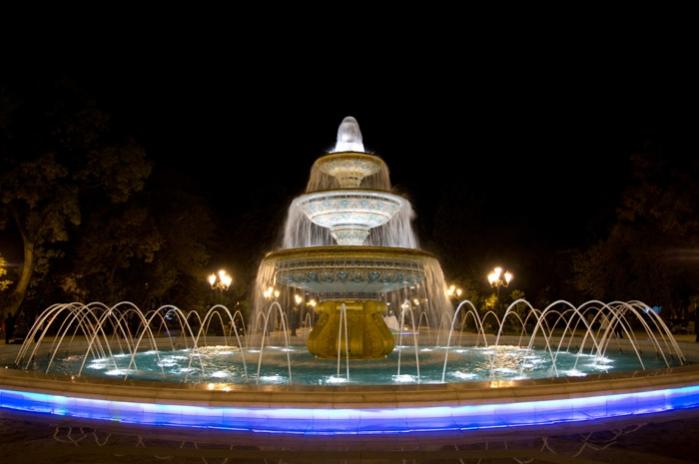 It would be great if the city matched Canderels $3 million contribution to reach $6 million. There's so much potential here...


College Park is getting a $3 million makeover

The stucco on the once elegant skating pavilion is peeling away and small plants have sprung up in the buildingâ€™s eaves troughs.

Throughout, the grass is trampled or the ground bare.

But while the city struggles with a $299 million backlog of repairs to Toronto parks, College Park is the lucky one getting a face lift.

The city is using $3 million in development fees from the builder of the Aura, Canadaâ€™s tallest condominium on the northwest corner at Yonge and Gerrard Sts., to redesign the space.

But even that amount may not be enough.

Reconstruction is further complicated by the fact that the park, built in the 1980s, was constructed on top of an underground garage.

â€œThe amount of money we have is going to be tight especially because weâ€™re building on top of a parking lot,â€ says Stuart. â€œThere are building and structural issues and we canâ€™t just dig willy nilly.

â€œItâ€™s easier to plant a tree in the ground than it is to plant one in a roof.â€

Plans call for retaining the skating rink, but the community will have an important say in the design, size and location, says Stuart.

Councillor Kristyn Wong-Tam and city staff will present preliminary design concepts at a public meeting Thursday at 6:30 p.m. at the Delta Chelsea on Gerrard St. W.

If itâ€™s kept, the rink, which drew about 1,200 people in the 2011-12 season, would most likely be completely rebuilt in a different location in the park. Scott passed away in September at the age of 84.

The pavilion will be renovated or redesigned, depending on the results of an upcoming report on the buildingâ€™s structural soundness.

Weâ€™re â€œalso doing our best to keep a water feature, but it may not be a giant pond,â€ says Stuart.

And instead of large swaths of lawn, city staff are looking to make the park more robust and easier to maintain by adding trees and shrubs as well as ground cover that is raised up and separate from pedestrian pathways.

Stuart says the park has fallen further and further into disrepair over the years even as new condos sprang up around it.

â€œItâ€™s been well used as a staging area, and part of it as a construction area for Aura,â€ explains Stuart. But she says it was also overlooked because itâ€™s â€œhard for surveillance by both police and city park staff. Thatâ€™s not an excuse but itâ€™s part of the reason itâ€™s in poor condiion.â€

A final design will be approved in May. Construction of the park will be finished in 2015.
M

i think one of the problems with the park is that its cut off by condo's college park mall etc. I think people forget that its there.
J

The laneway via Yonge is actually quite wide. Some type of arch or entrance would draw people into College Park.

As I said, so much potential!

City of Toronto website for the project - including presentation from a previous meeting in Oct:

Comment - $3M is pitiful for a project of this scale. I would definitely expect disappointment with a budget like that.

marsh said:
i think one of the problems with the park is that its cut off by condo's college park mall etc. I think people forget that its there.
Click to expand...

I remember looking out the window of the brand-new apartment I had just moved into at The Liberties, in 1988, and seeing the park being rebuilt... And I have fond memories of the patch of unevenly-growing grass where people would sometimes lie down in the summer at lunch time, unaware of the numerous dogs that preceded them...

AlvinofDiaspar said:
Comment - $3M is pitiful for a project of this scale. I would definitely expect disappointment with a budget like that.

I was thinking the same thing but I didn't want to be a Debbie Downer about it, though when it comes to the public realm in Toronto it's hard not to be! I'm happy some funds are being thrown into this but the bigger picture that this paints of the sorry state of the public realm in general - and the city's inability to do anything about it (whether for fiscal, philosophical, political or structural reasons) makes me very sad.

This is a well populated area, both day and night. Both the residences and office and commercial uses in the immediate area (including those that face right onto the space) would fill this park up with people if the space was inviting. There is lots of potential for this to be a well used gem. $3m probably wont get it there.

Was at the public meeting tonight for the revitalization of the park at College Park (a.k.a. Barbara Ann Scott Park), which is desperately needing it as it's been looking very dishevelled as of late. They proposed two different plans for the use of the space, of which the 1st proposal had the bigger and better audience response.

They said they have a total budget from start to finish of $3 million to do the revitalization. Part of this money is coming from the builder, Canderel Stoneridge (or at least through the charges enforced by the builder to purchasers of units in Aura). I'd like to see how they will be able to redo the entire park the way they are thinking with only $3 million. Perhaps Canderel should have put more into the project to make the park revitalization really worthwhile?

Some of the major talking points at the public meeting included the lack of safety in the park (lots of shady characters hang out there), the need for a space for dogs (there are already tonnes of dogs in the neighbourhood and Aura will be adding more than 900 more residential units to the immediate neighbourhood - where will all of these dogs relieve themselves?) and maintaining a skating rink space, though in a re-worked and updated way.

A lot of people at the meeting were super upset with the commercial spaces seeming to have taken over the park space with Bed Bath & Beyond's blazing signage and interior lights spewing out light pollution across the area. As far as I know, BBB wasn't even allowed to have put up the signage that's facing into the park - it's an issue with city signage by-laws.

China can built the world's tallest building in 3 months and this tiny 0.75 hectares park takes 3 years. Someone's doing something wrong.

http://news.nationalpost.com/2012/1...-skyscraper-220-storeys-in-just-three-months/
Our roads are not here for automobiles. Our roads are here for people to get around. - Michael Bloomberg, Mayor of New York City - July 10, 2012

Thanks for report and photos Larissa. The proposed schemes are utterly uninspiring - and have such an excess of hardscape - which at 3M would likely be concrete, just like how it wrecked HtO. Yuck.

When parks become conduits for large numbers of people, and when flocks of dog owners descend upon it, a greensward degenerates. As it stands in College Park, the grass and gardens are natty, and moreover, in summer, they don't get watered, and rarely live up to the green fantasy. Looking at these plans I'm reminded of the Trinity pathway at Eaton Centre: the trees and hardscape are soothing - it does work.
You must log in or register to post here.
Share:
Facebook Twitter Reddit Pinterest Tumblr WhatsApp Email Share Link