Morguard is in the very early stages of redeveloping Bramalea City Centre, which will maintain the core shopping mall over the long term (which is holding its own, but like most mid-range malls, has lost some of its lustre), but slowly redevelop the parking lots and underperforming portions of the mall.

I noted a pre-consultation in the Brampton Planning Viewer that calls for the demolition of the old Sears store (which was part of a late 1980s expansion), and replacement with four residential buildings with heights of 9, 22, 27, and 32 storeys, with a new 1 storey commercial retail building and an underground parking garage.

The pre-consultation submission was received in March 2021, and is now noted as closed, but it is worth watching.

The much smaller Centennial Mall, at Kennedy and Vodden Roads, is also going through a redevelopment plan.
D

About time we hear about this. Not surprised at them wanting to get rid of the Sears building considering it is dead space right now, but I didn't think that would be part they would redevelop first (I thought they would do one of the parcels of parking in between the Peel building and the retirement residence, the old Home Outfitters building and lot, or possibly the lot in between the Library the HBC).

The planning documents are available. It's going through the planning process, but detailed site plan and architectural plans are now available.

The four proposed towers -- between 12 and 33 storeys - will replace the vacant Sears store and a surface lot on the mall's northwest end, and will contain 1,000 residential units, expected to be rental, rather than condominium. The tallest building will be 118 metres. The rest of the mall will remain standing, at least in the medium term. Morguard proposes changes to Peel Centre Drive (the roadway encircling the mall's north, west, and south sides, partially maintained by the city and partially by Morguard) to make it more pedestrian and cycling friendly. 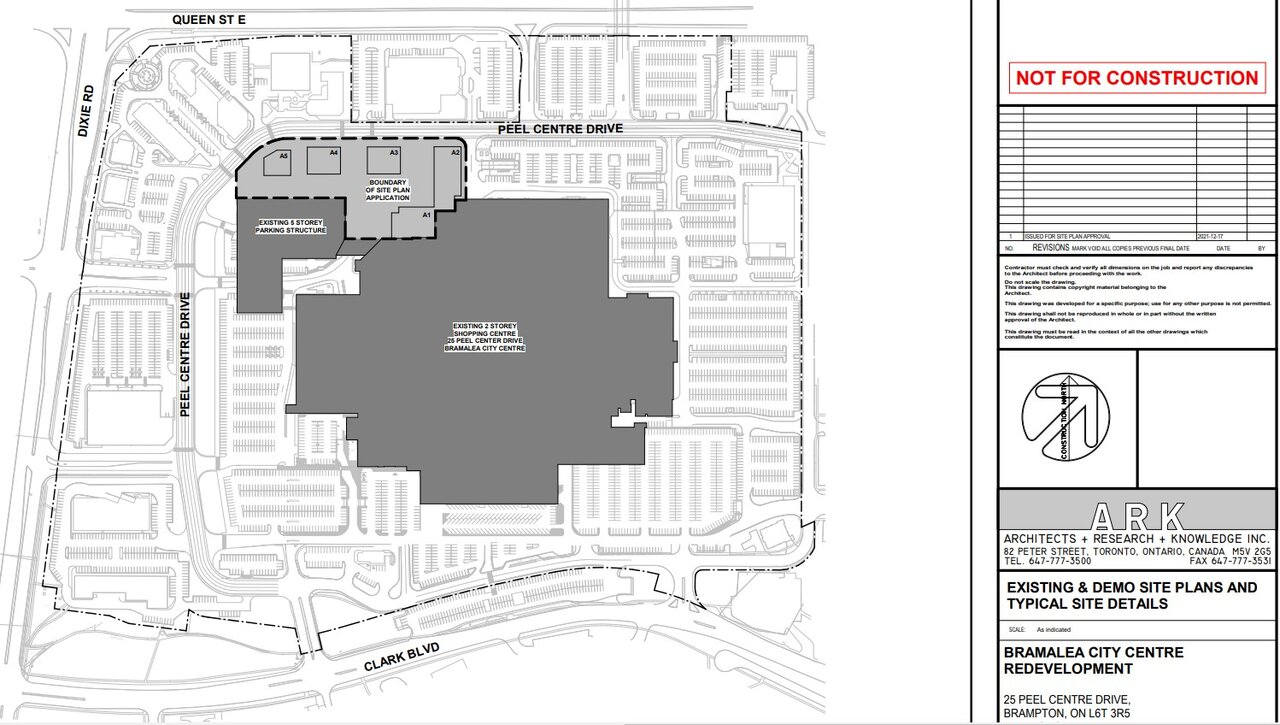 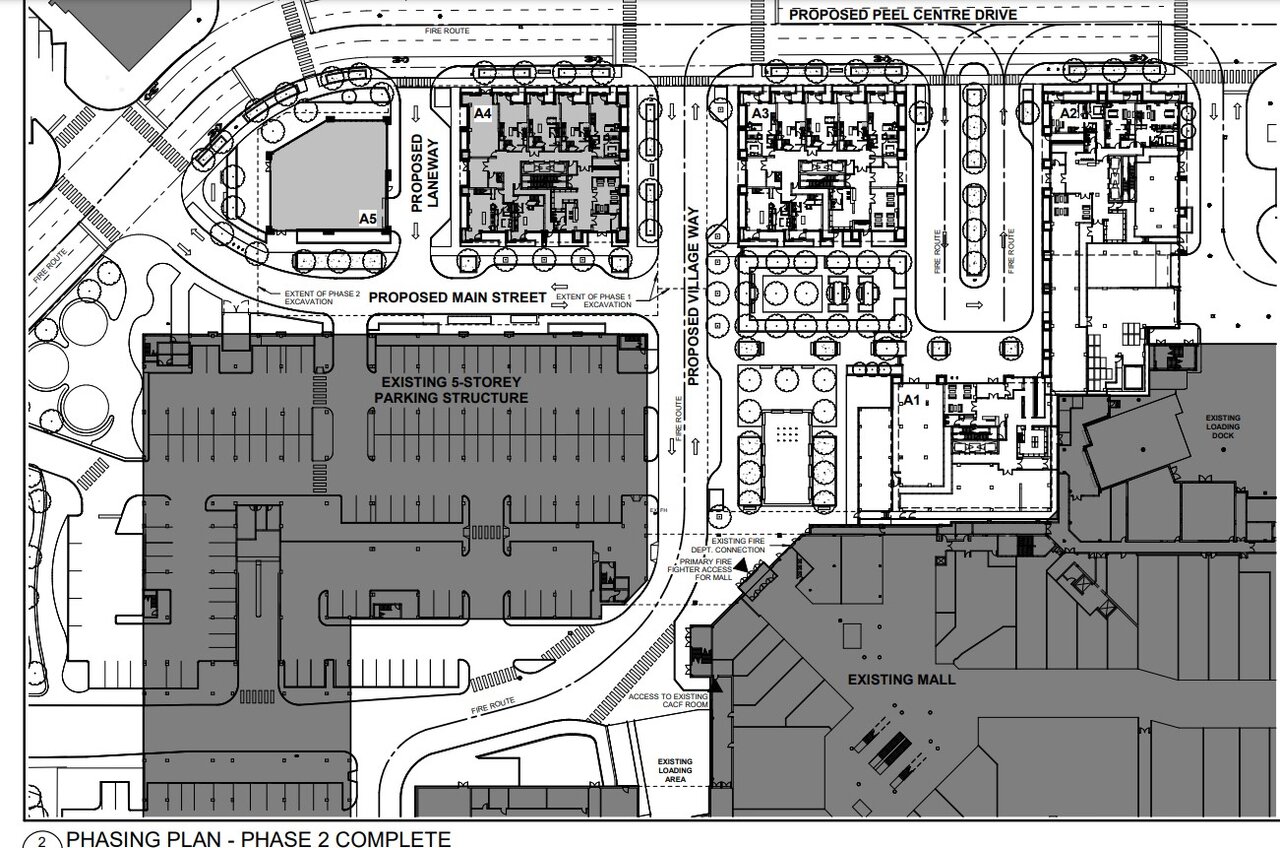 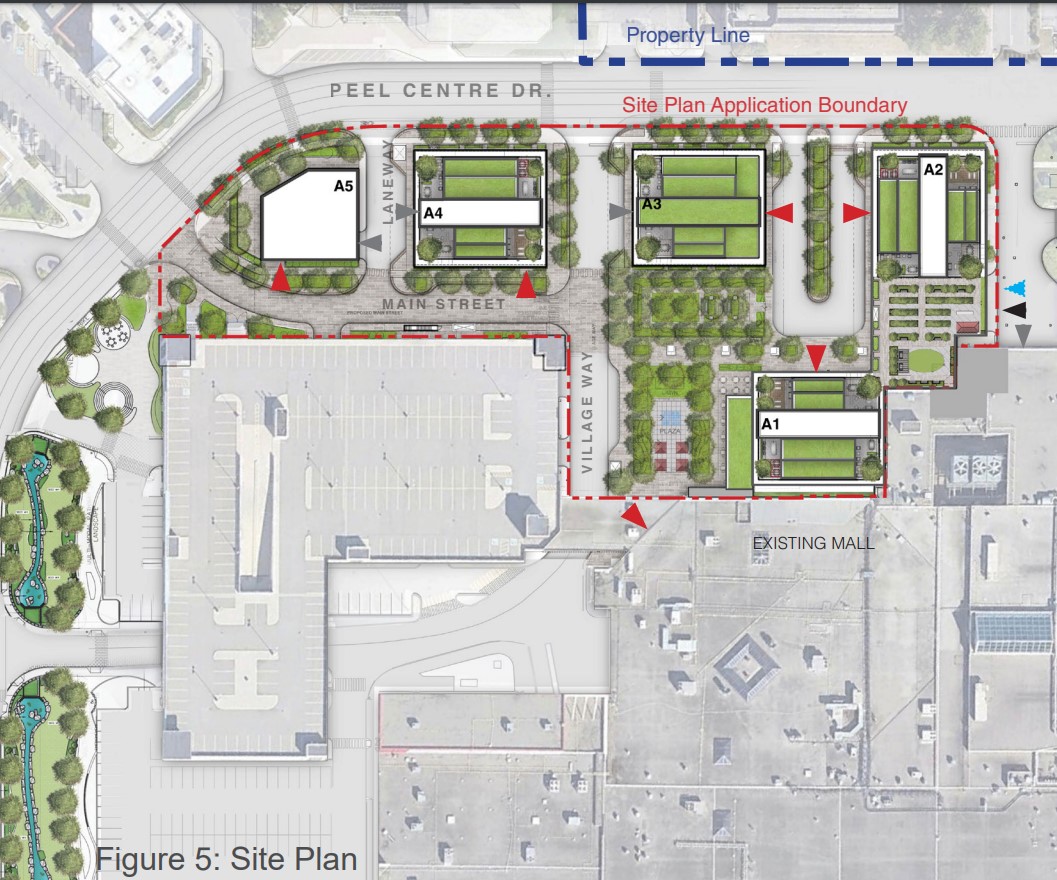 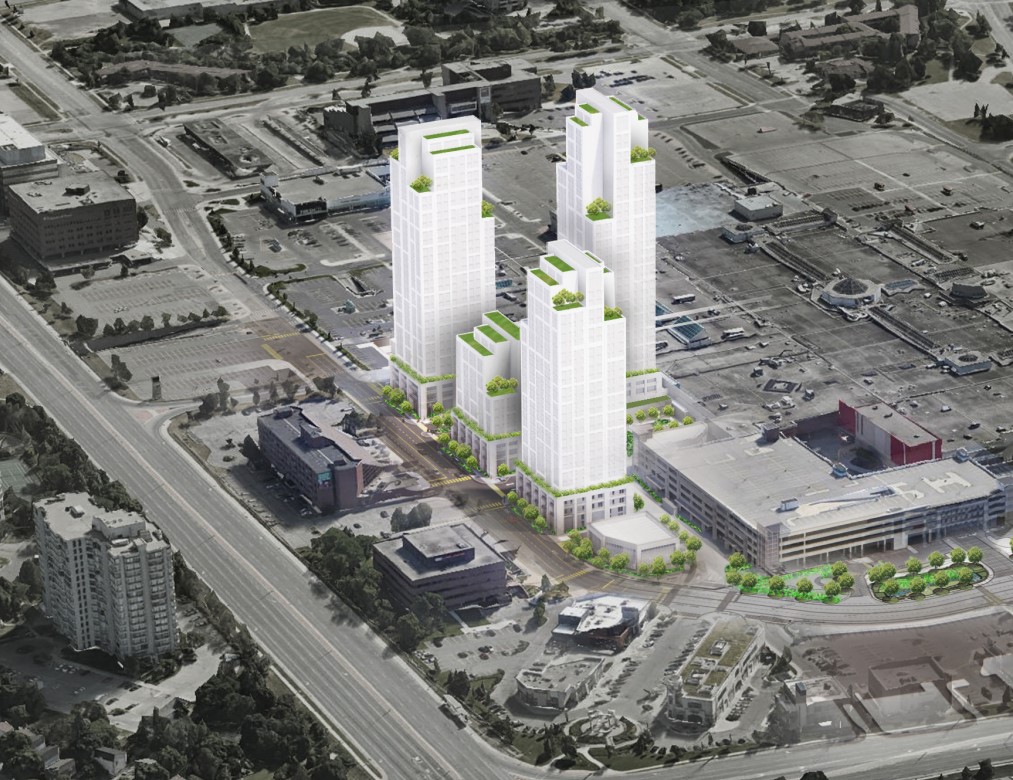 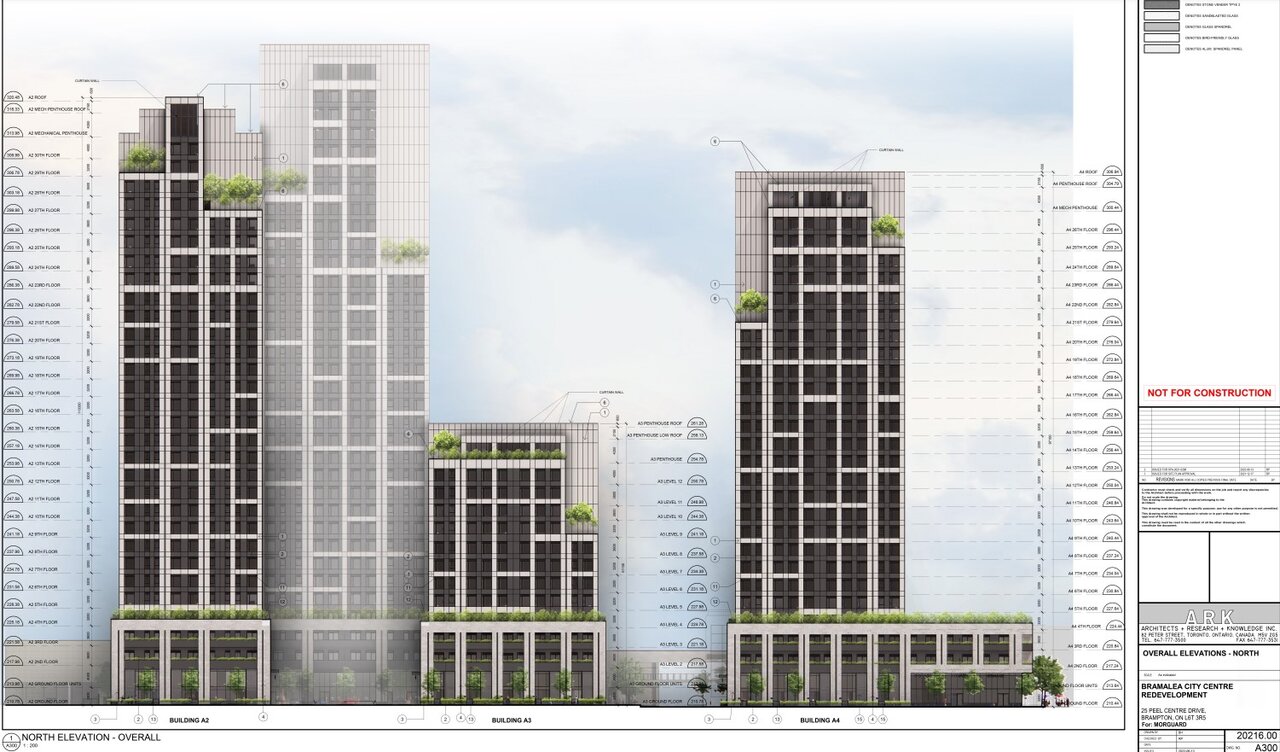 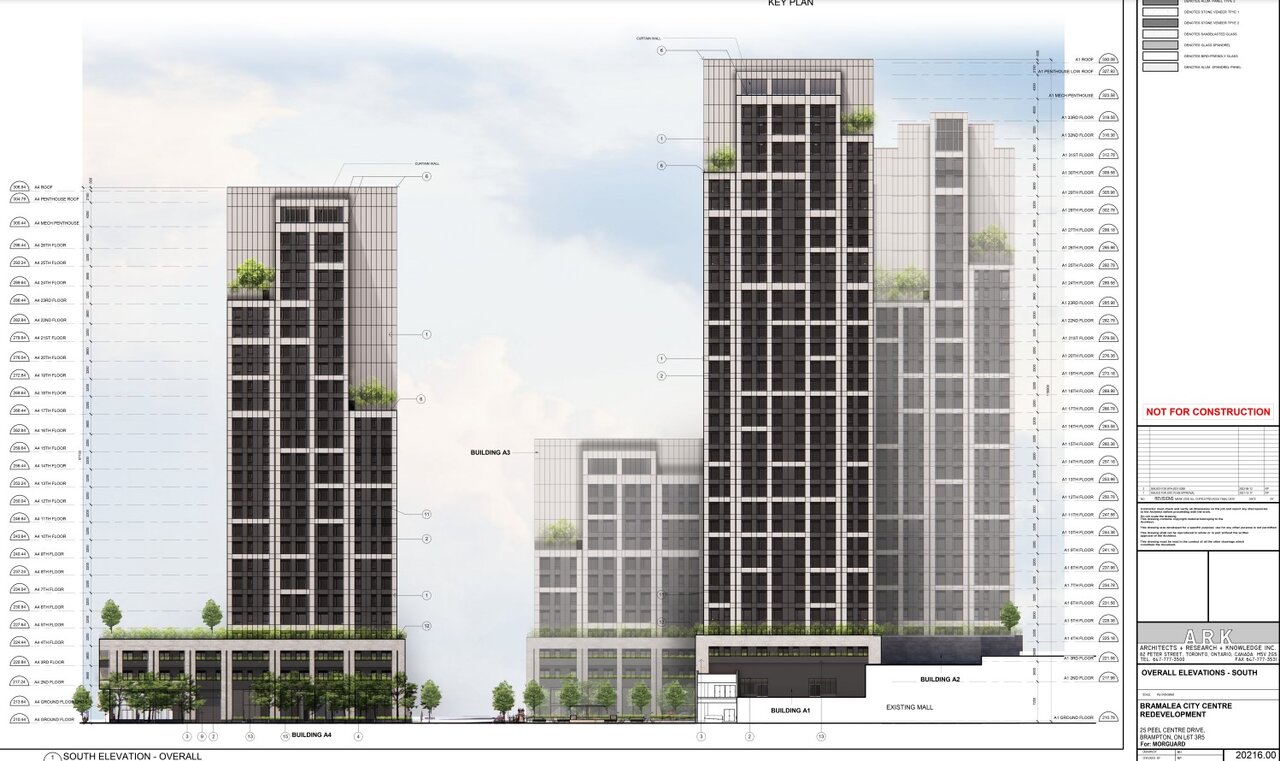 These look fantastic... Are additional carparks near the mall also going to be subject to in-fills?

mininamib said:
These look fantastic... Are additional carparks near the mall also going to be subject to in-fills?
Click to expand...

Nothing to indicate that right now. Part of the northeastern surface lot at the most recent expansion is actually above an underground garage.

But I believe that Morguard is planning to re-acquire the old Brampton Transit terminal site on Clark Boulevard. That could provide either a later phase of intensification or a staging area. If I had a say in the development plans, I’d focus on the Dixie Road side next.

This project has been added to the database with renders from the Urban Design Brief of June 2022: 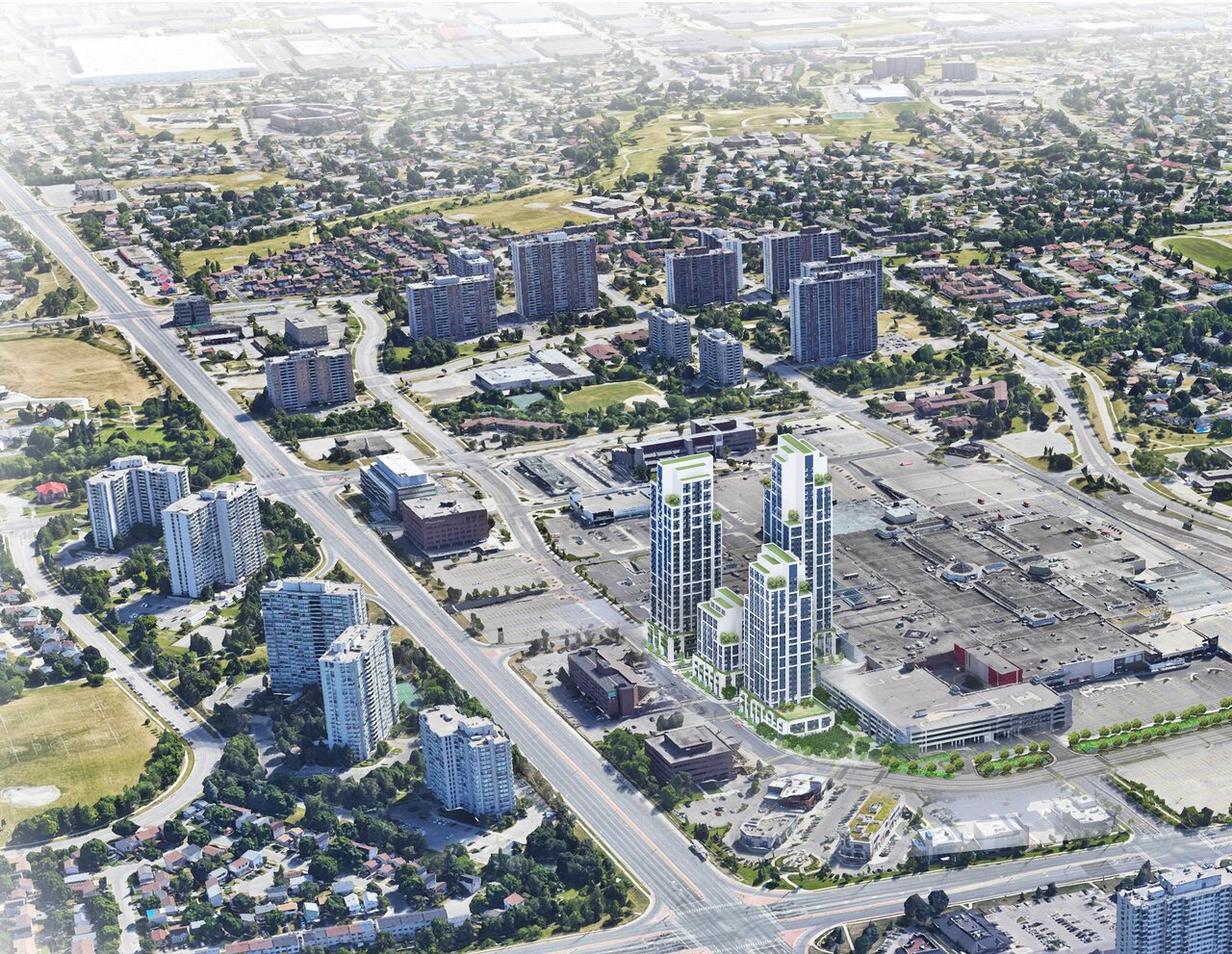 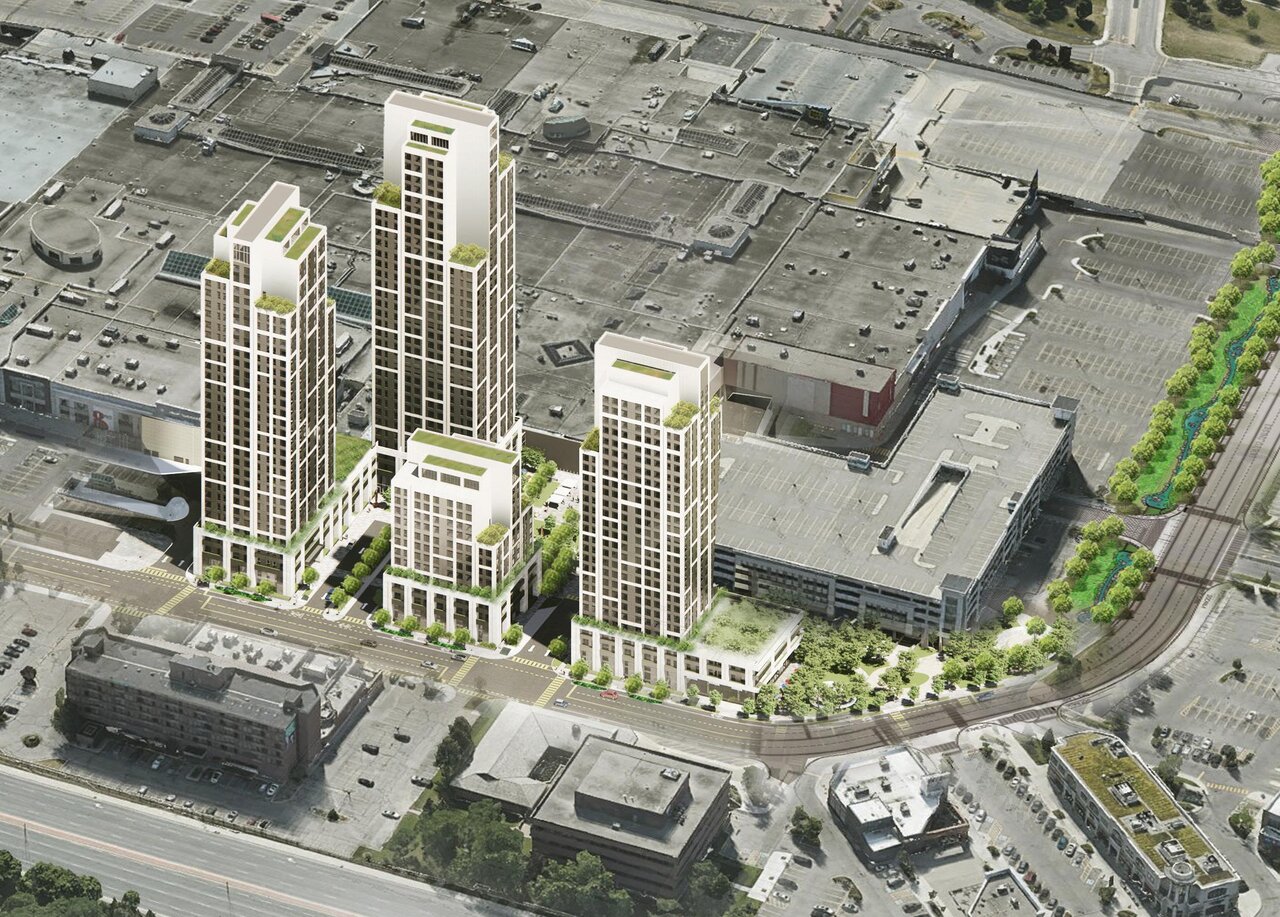 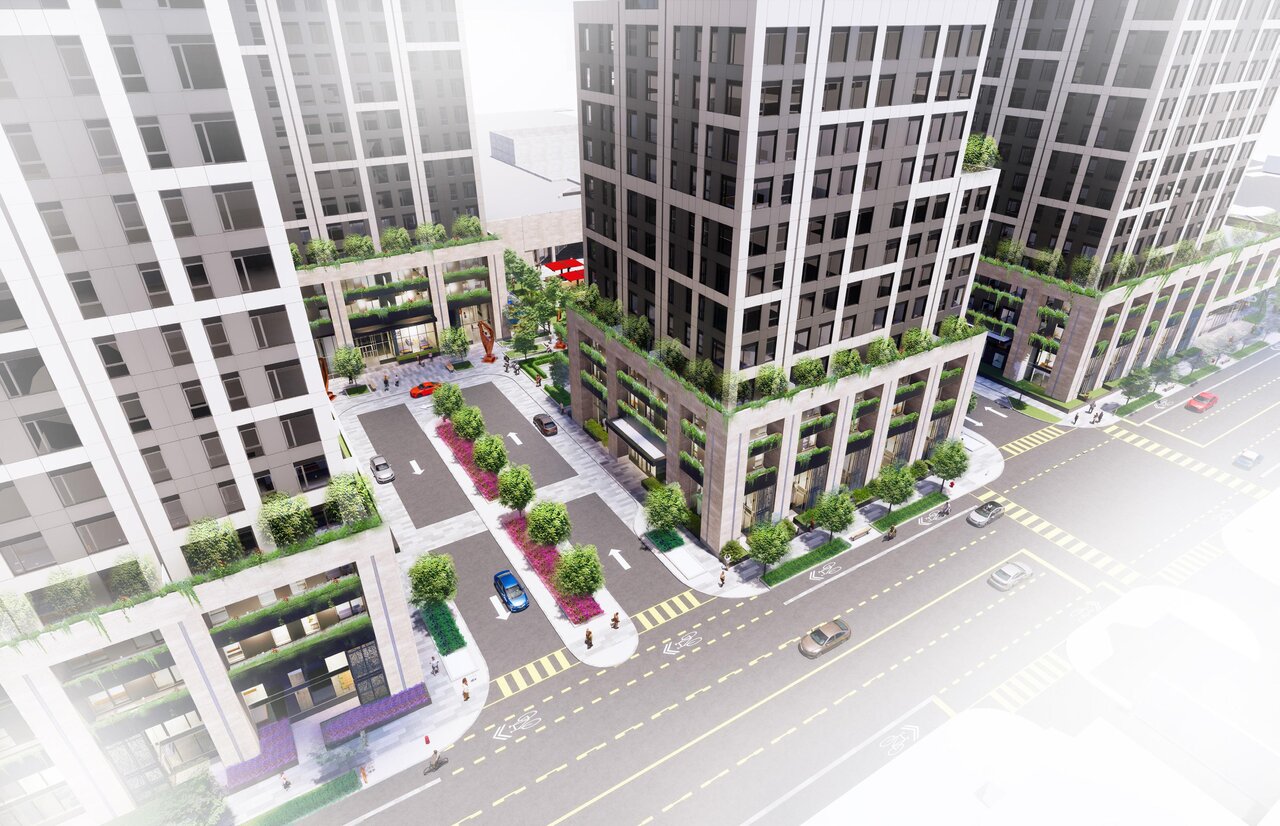 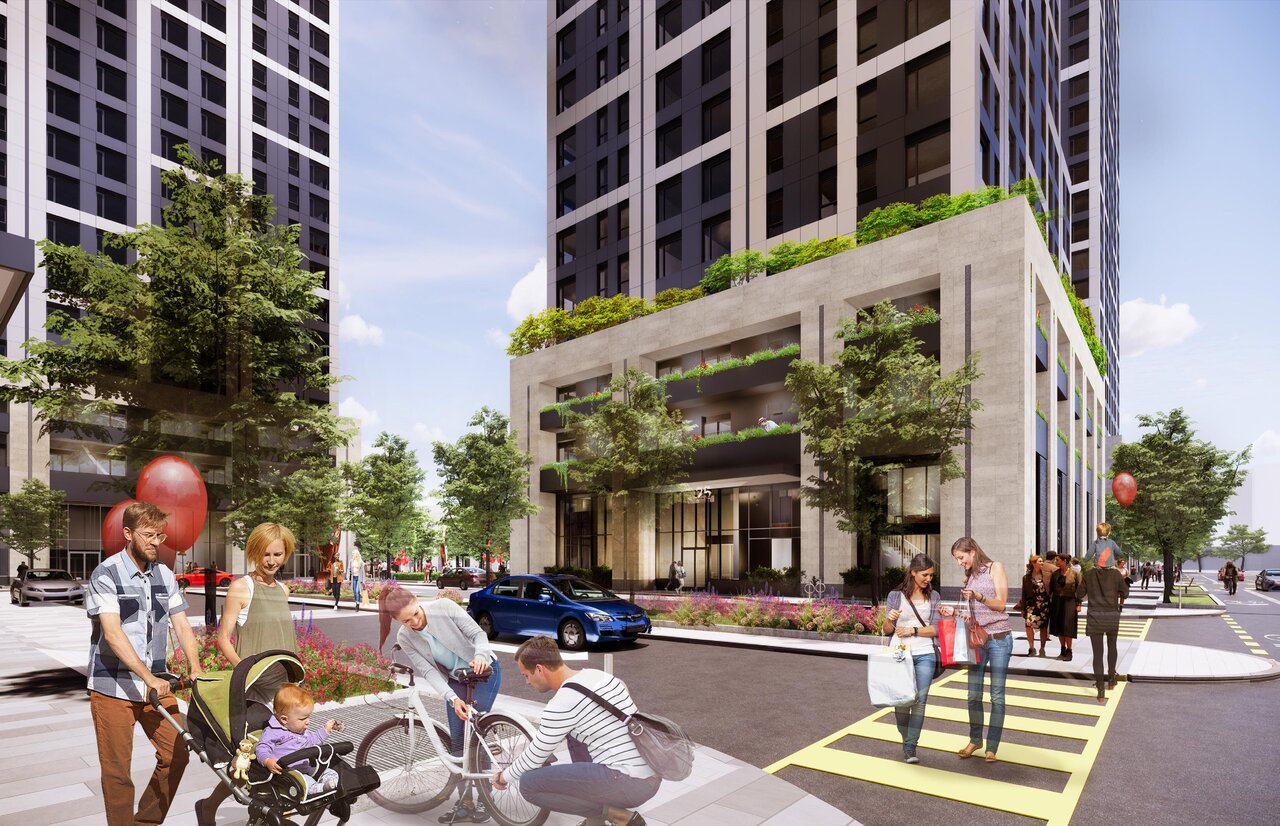 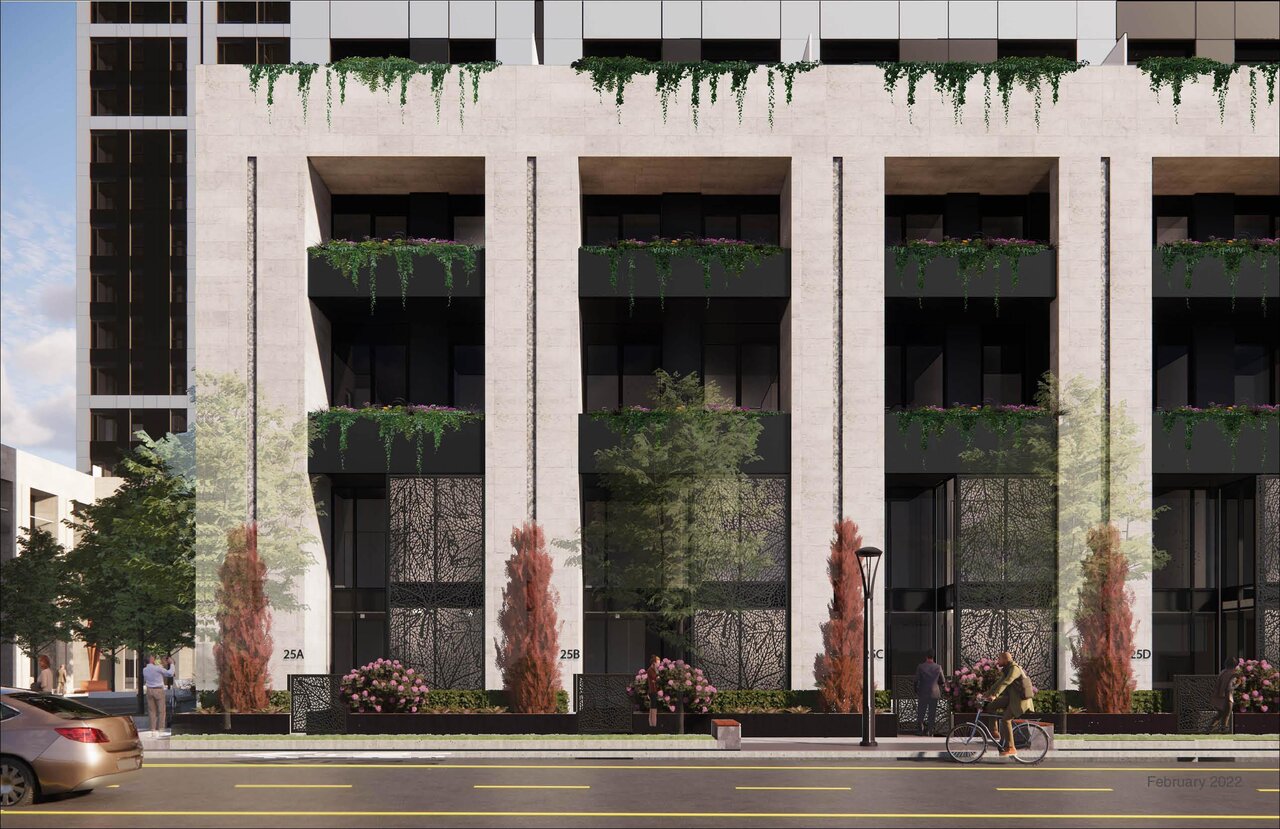 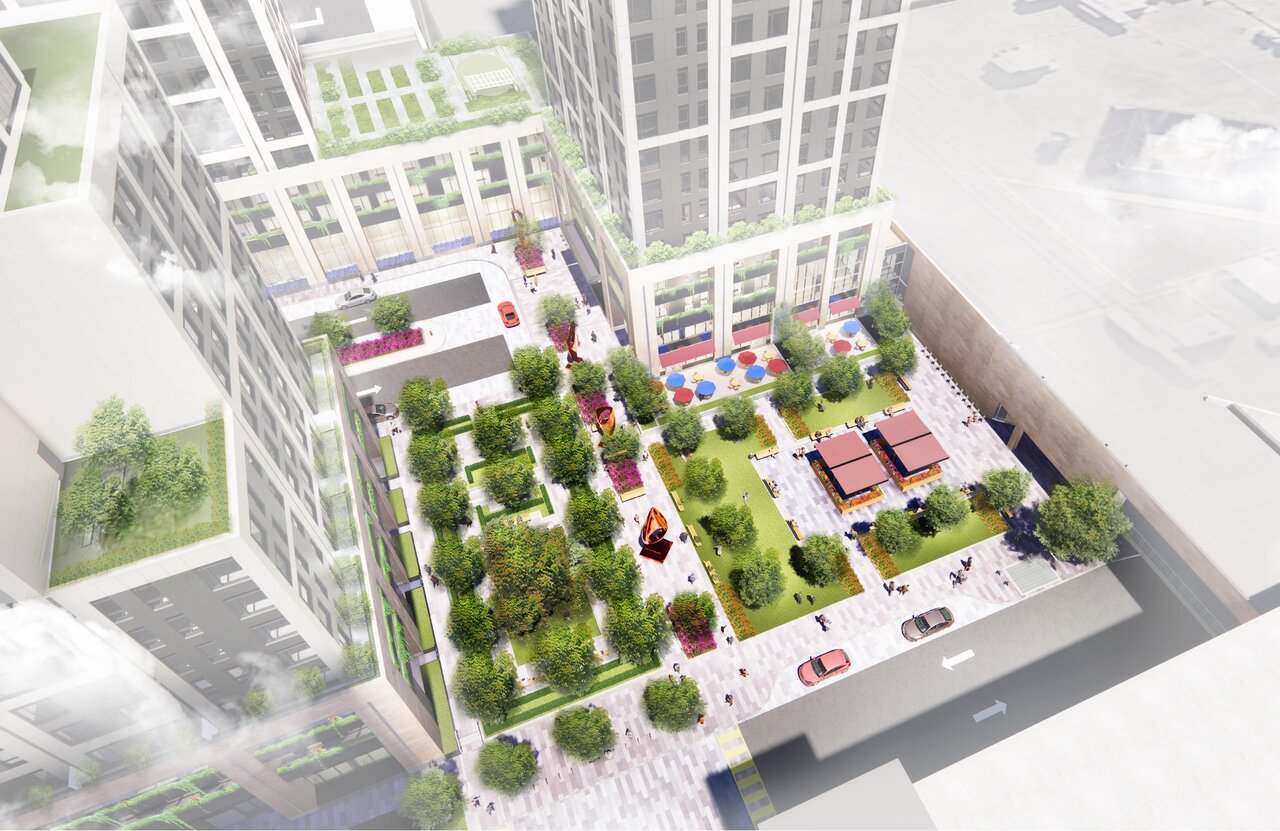 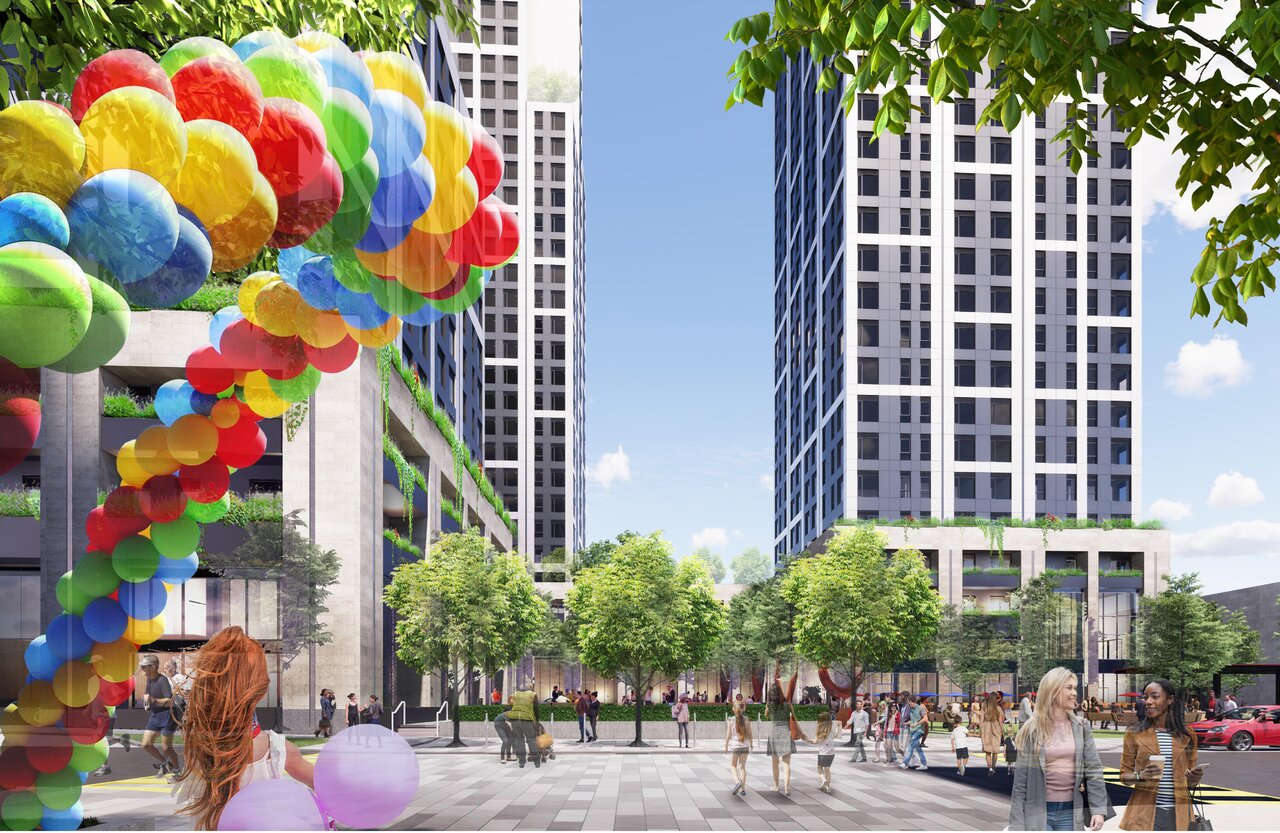 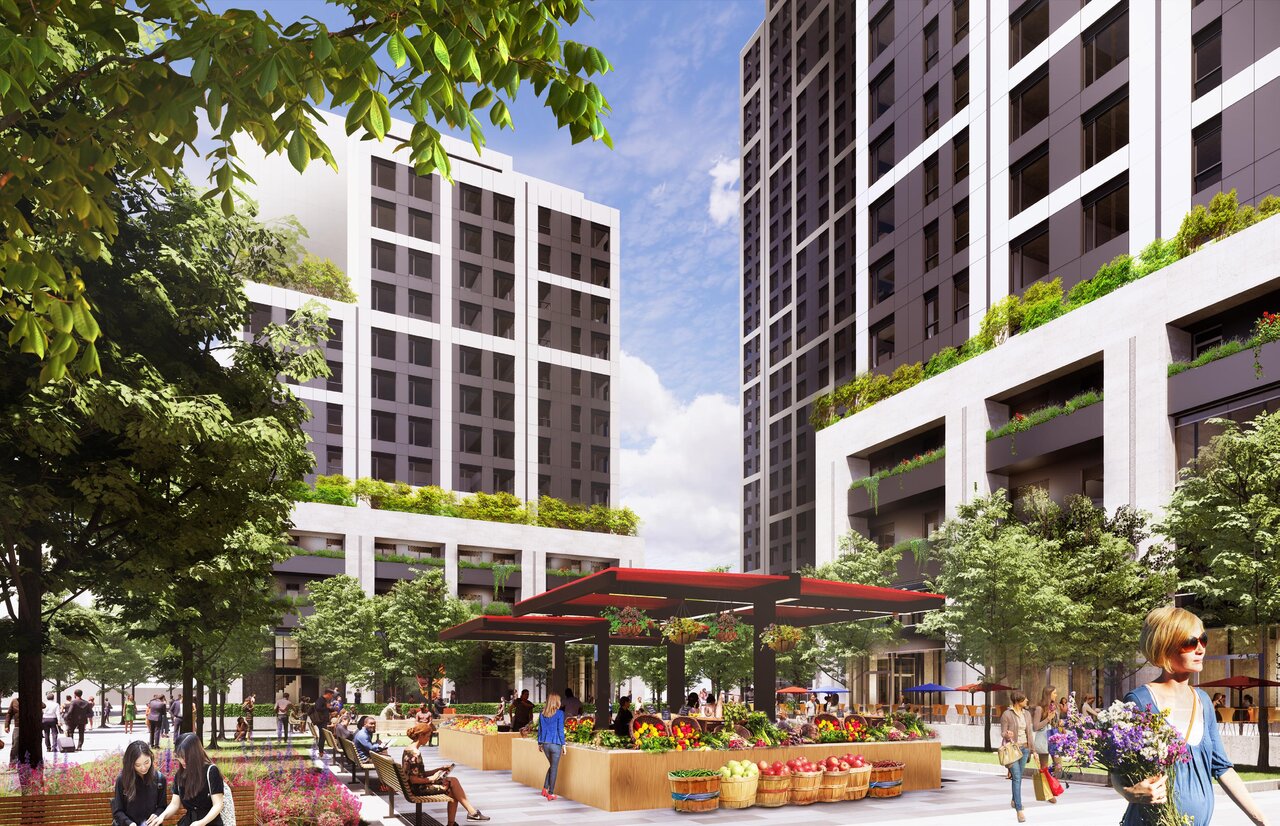 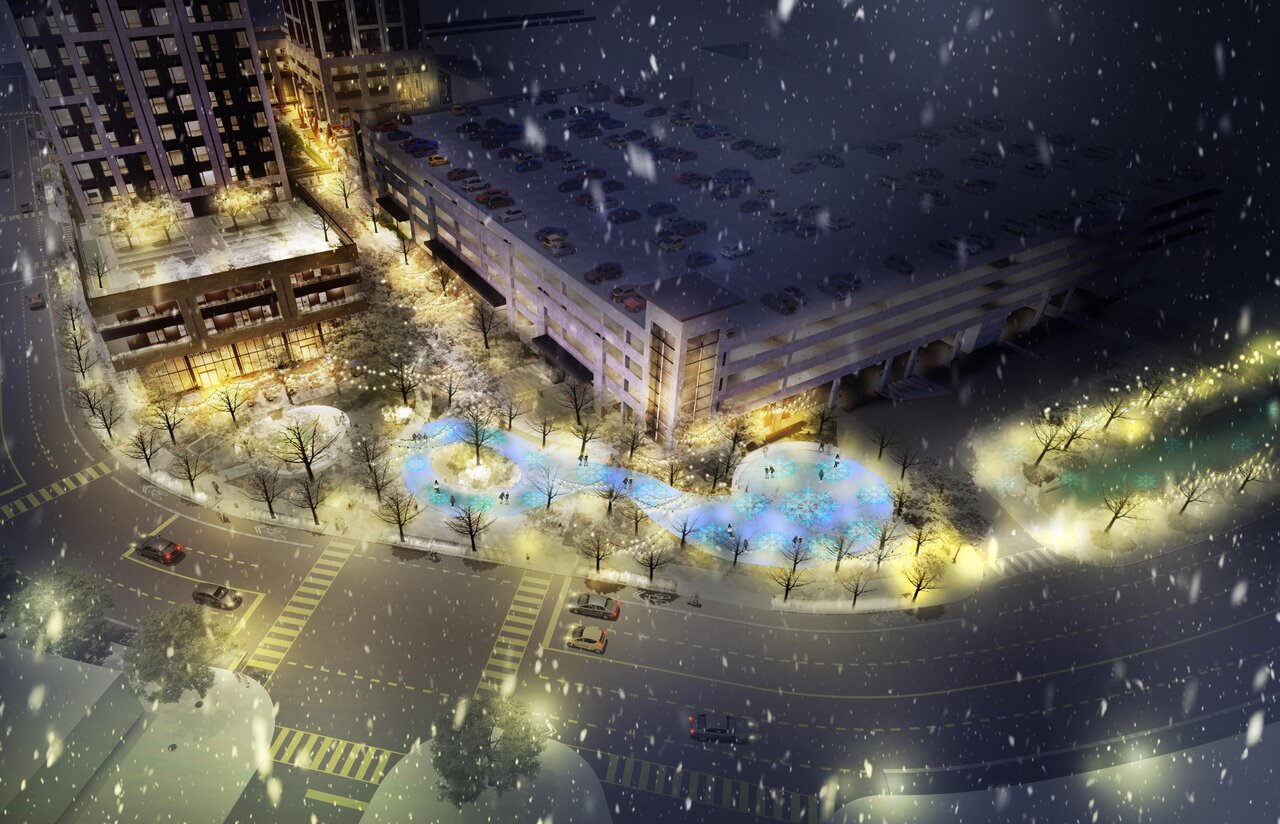 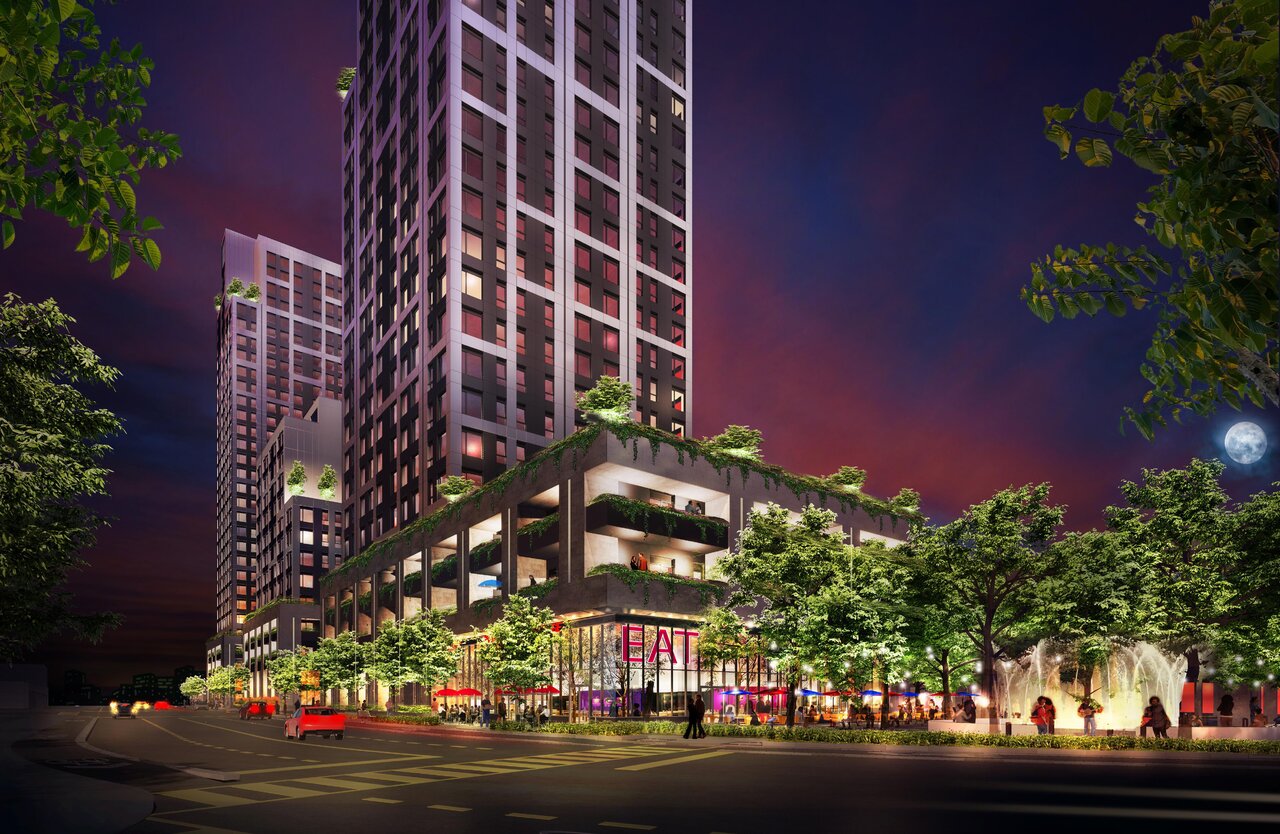 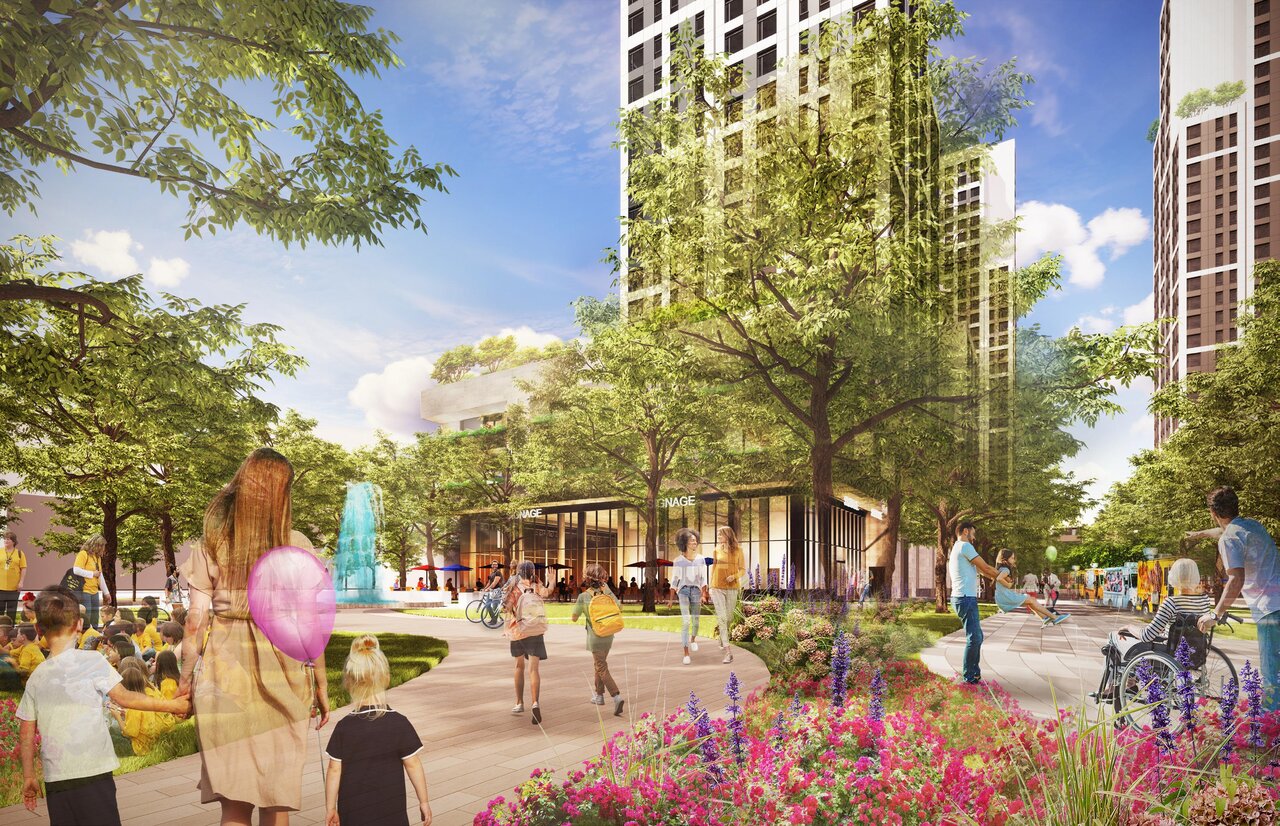 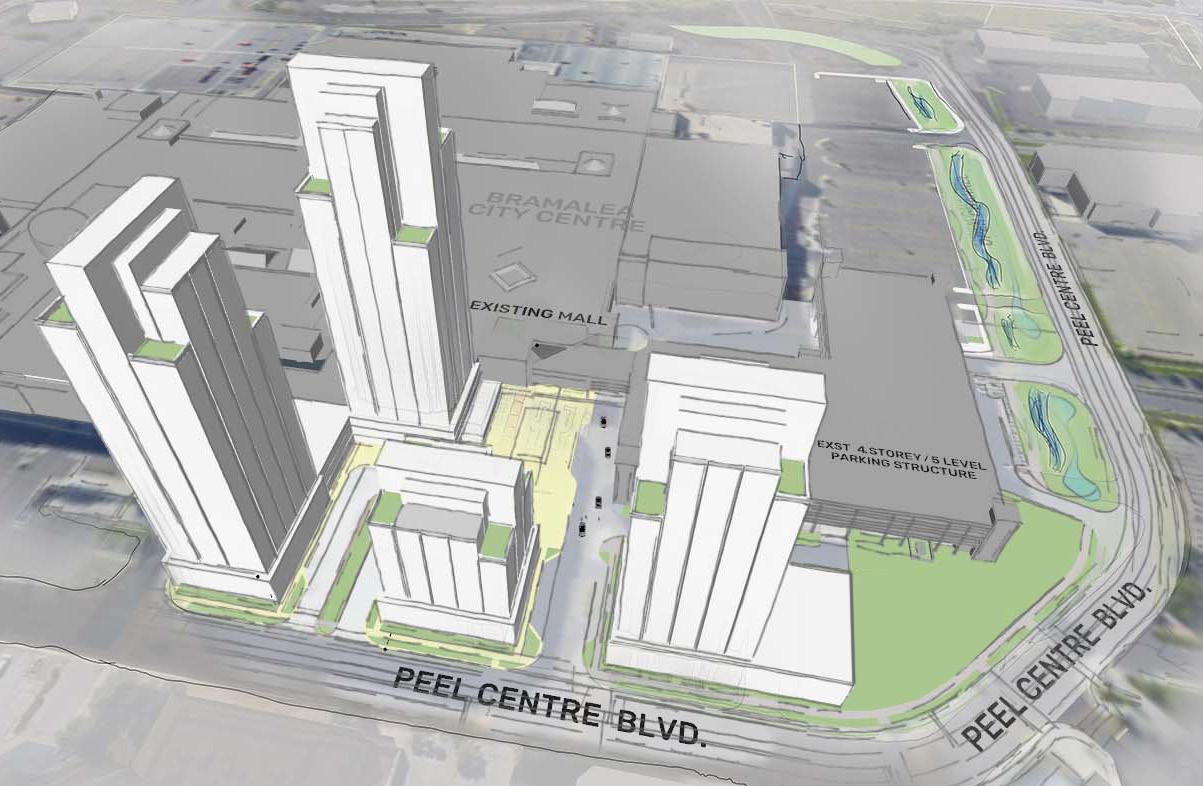 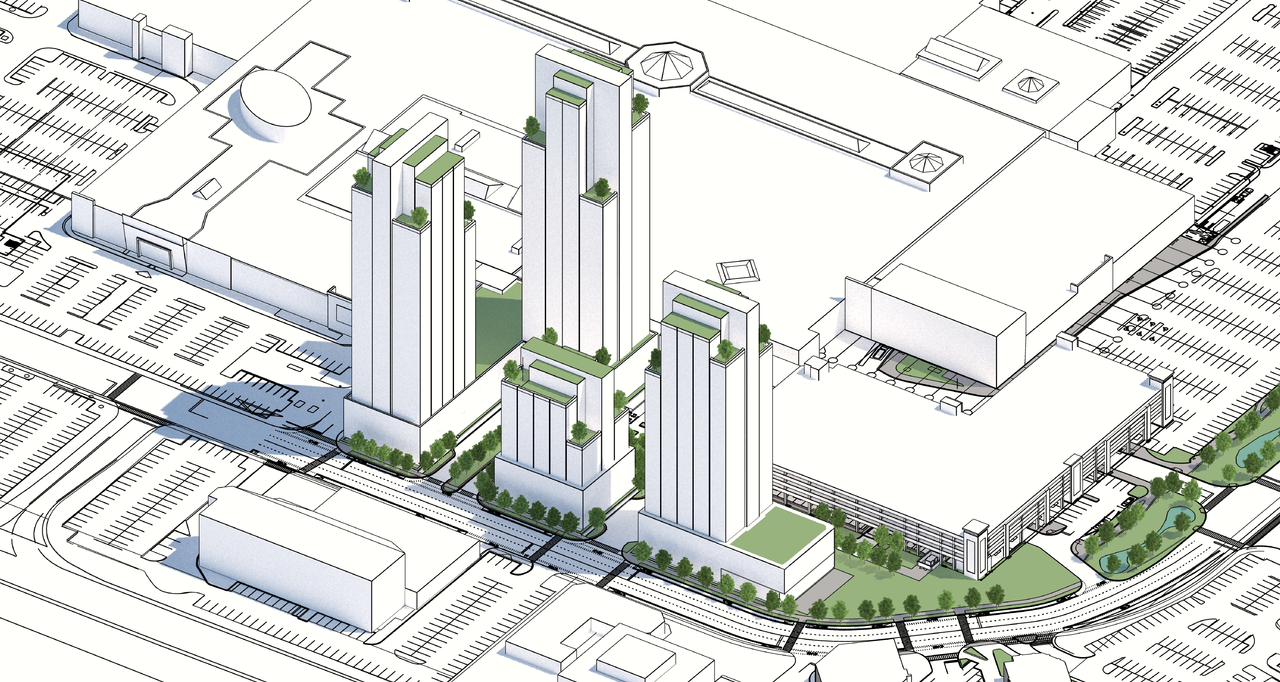 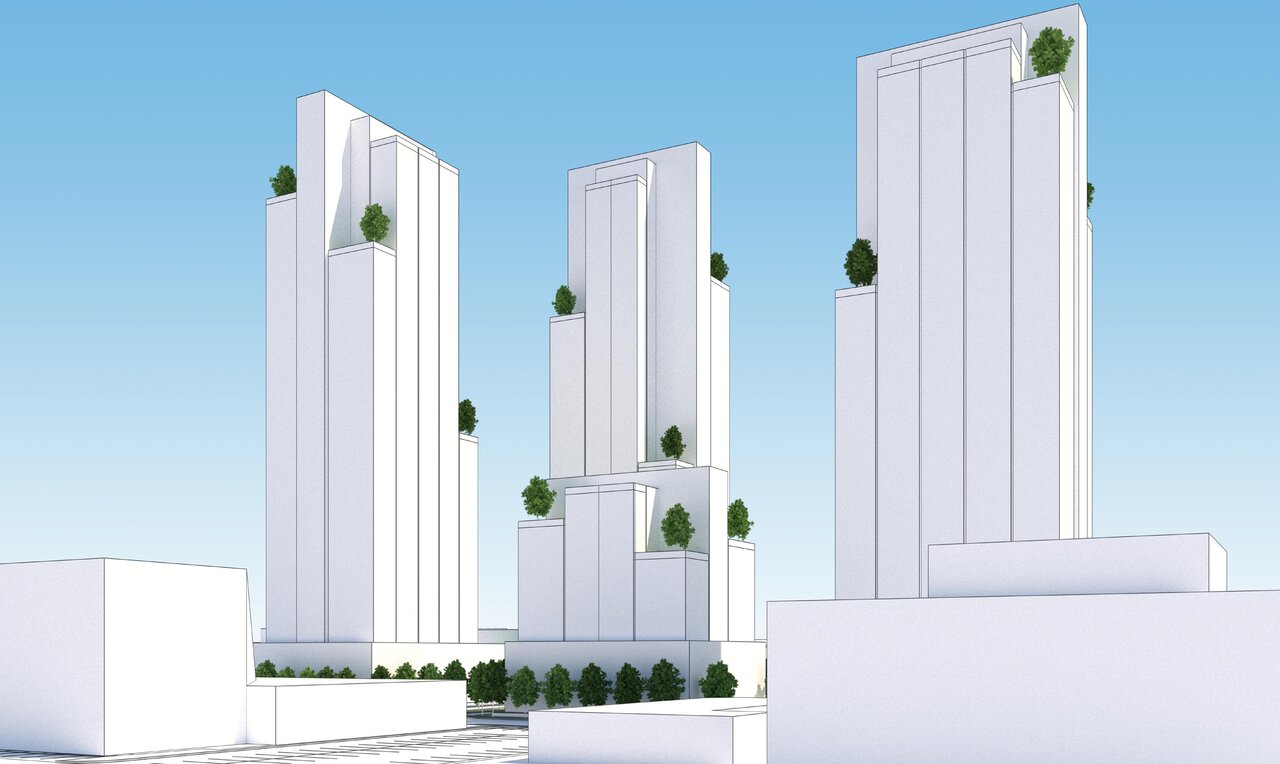 Lastly, I will include the vision for this site from the Brampton 2040 vision document of 2018: 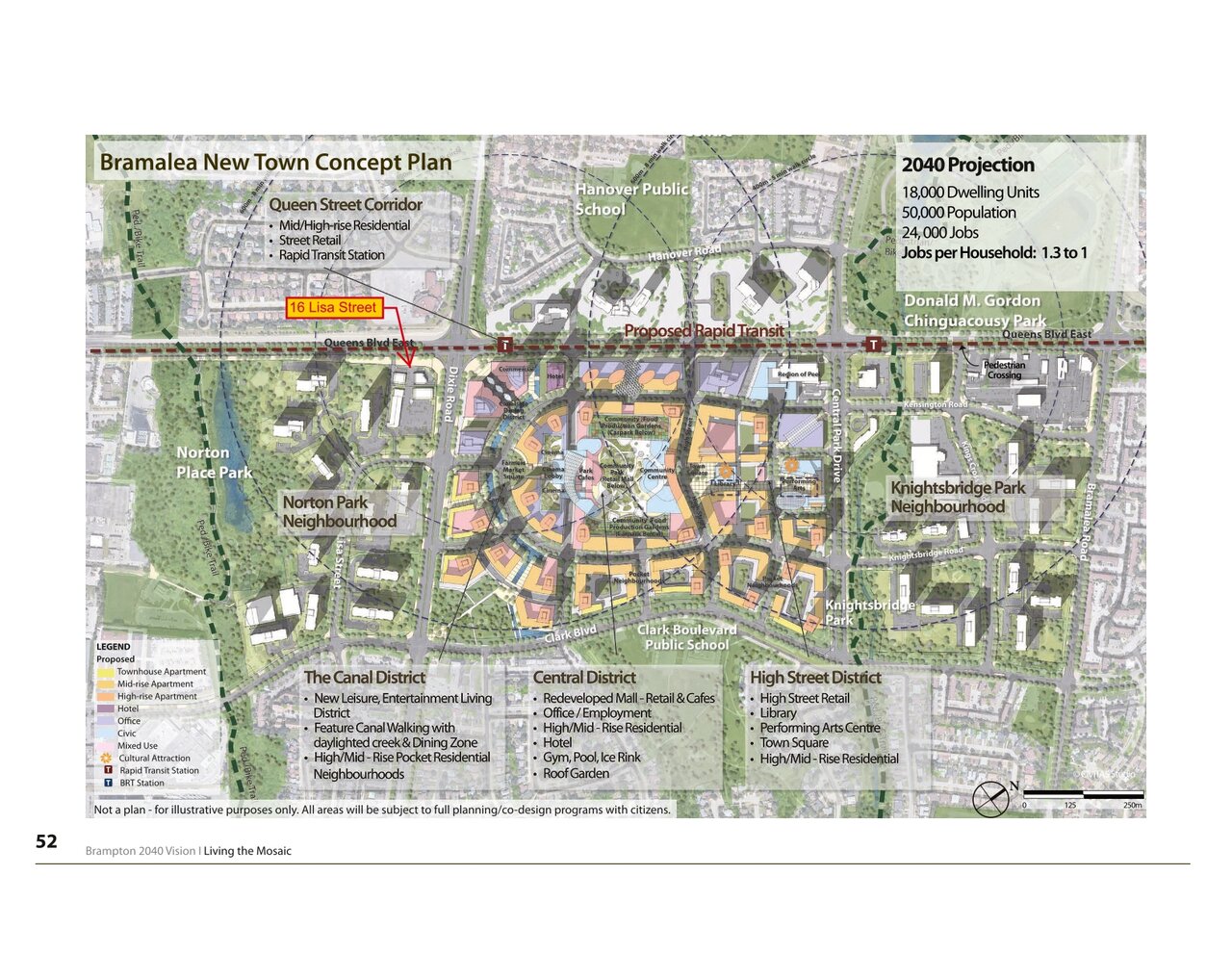 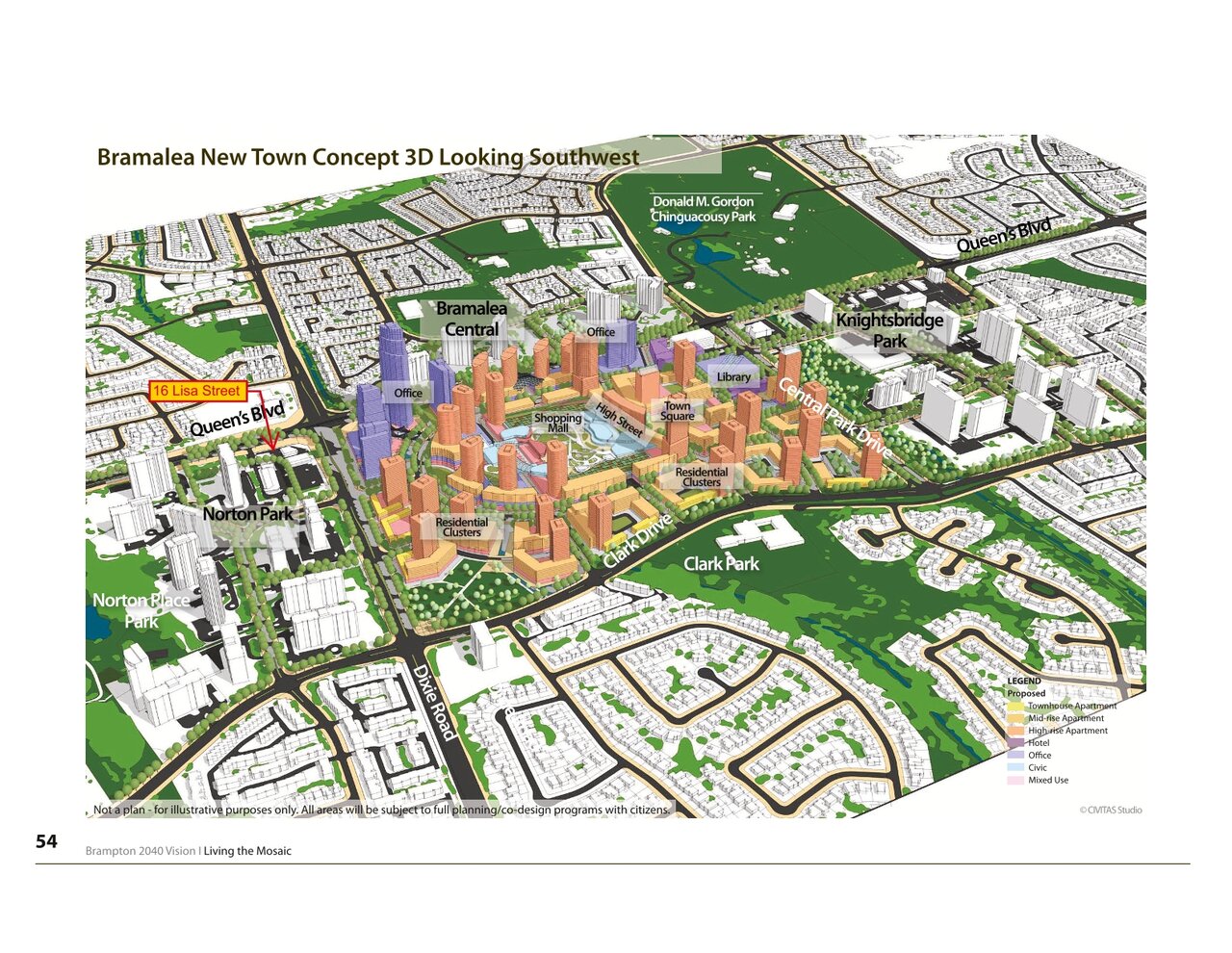 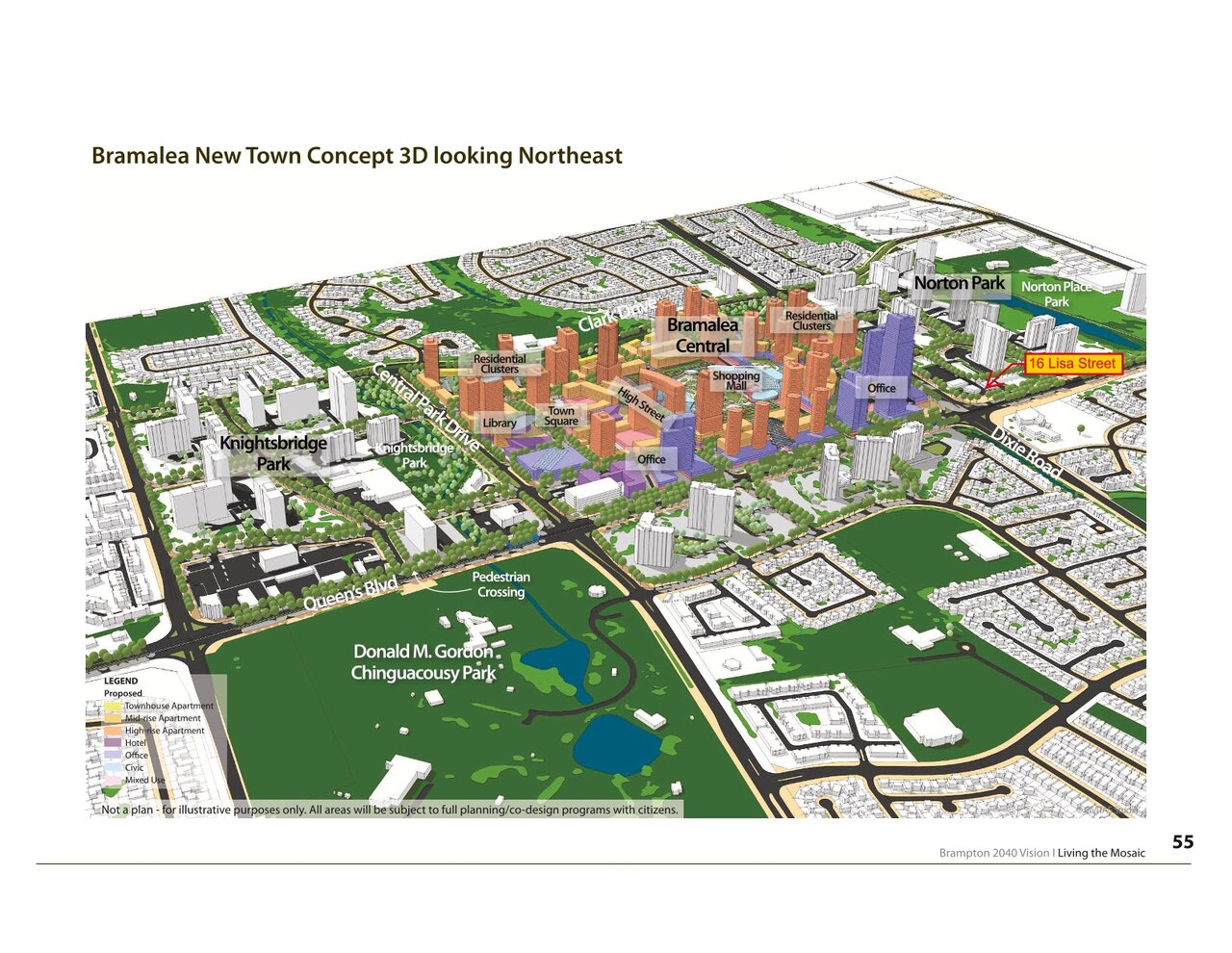 I remember when that Sears opened. In fact, that whole extension to the mall was called The Promenade originally (and pre-dated Sears by a few years). They quietly dropped that branding when the Thornhill mall opened with the same name.
____________________________
Relief Line Facebook Group

Though when details are available, I’ll create a new thread, but across from the Sears store, theres a proposal for the former Holiday Inn – now retirement residences – for three (3) towers ranging in height of 38 to 40 storeys.

The Brampton 2040 vision was honestly one of the most refreshing and visionary documents I have seen from a Canadian city ever. It really knocks anything out of the ballpark in the Toronto region.
A

abovegrade said:
The Brampton 2040 vision was honestly one of the most refreshing and visionary documents I have seen from a Canadian city ever. It really knocks anything out of the ballpark in the Toronto region.
Click to expand...

What makes you say that? It seems to be more of the same hyper-density in growth areas and very modest infill in the yellowbelt, mainly strip mall redevelopment. And even the remaining greenfields they are suggesting to develop at relatively low densities.
Member since February 10, 2002

I dunno, sea of asphalt parking lots is likely the best place build density. Nobody is going to miss those aesthetically. And a darn site better to look at in the end, to say the least.
Quadruple "A" geek: Architecture, Azeroth, Anime, Aphex Twin.
A

UtakataNoAnnex said:
I dunno, sea of asphalt parking lots is likely the best place build density. Nobody is going to miss those aesthetically. And a darn site better to look at in the end, to say the least.
Click to expand...

But it's not like Brampton would be unique in redeveloping strip malls.
Member since February 10, 2002

These images from the Brampton 2040 document are completely wrong in terms of the direction you're looking.

…and this one looks south-ish,

…so congratulations City of Brampton.