quite the explosion caused significant damage to one of the existing slabs on this property ... those old blocks sure can take a whallop though.
got some ice to sell you
M

For consideration by Toronto and East York Community Council on Sept 15/09:


Official Plan Amendment and Zoning By-law applications were made to the City for intensification of 2 Secord Avenue and 90 Eastdale Avenue. The applications, as submitted, seek to permit the demolition of nine townhouse blocks, containing a total of fifty-two, 3-bedroom rental townhouses at 2 Secord Avenue and 90 Eastdale Avenue, in order to permit the construction of a 30-storey residential tower, a 5-and 8-storey residential building, and sixty, 3-bedroom rental townhouse dwelling units.

The applicant proposes to retain the existing 22 and 24-storey apartment buildings at 2 Secord Avenue and 90 Eastdale Avenue. The existing and proposed buildings would be connected below grade by two levels of parking.

In a letter dated April 1, 2009 (Attachment 1) the applicant indicated that they have decided to eliminate the demolition of the existing townhouse dwelling units from the proposal. Therefore, a Section 111 application for rental housing demolition is no longer necessary. In that same letter, the applicant requests that the applications be held in abeyance, and that they will contact City Planning to discuss additional revisions to the applications.

The meeting happens Wednesday, Nov. 9 at Secord Public School at 7 p.m. A community consultation meeting took place previously in 2010, but the proposal by the Preston Group, which owns the property and several adjacent residential properties, has since been revised.

Local Councillor Janet Davis said the plan has gone through three or four versions, but the public hasn't had a chance to see this newest version yet that proposes just one new residential building of 22 storeys (previously 26) with 208 condominium units.
Click to expand...

The proposed condo building would be built adjacent to the existing apartment building at 90 Eastdale Ave. and behind the residential building at 2 Secord Ave., both of which are owned by the Preston Group. An earlier proposal included a second building to be built on the surface parking lot of 2 Secord.
Click to expand...

Residents' concerns also included living with years of construction, the shadow cast of the new building, the loss of the green space, and the addition of more residents in the area, which would increase traffic and could cause overcrowding at the local school. There are also concerns among tenants about the Preston Group's ability to manage this project as they've had issues with their landlord for years, including in the fallout after a fire and explosion with an underground hydro vault in July 2008. The tenants association formed following that experience.
Click to expand... 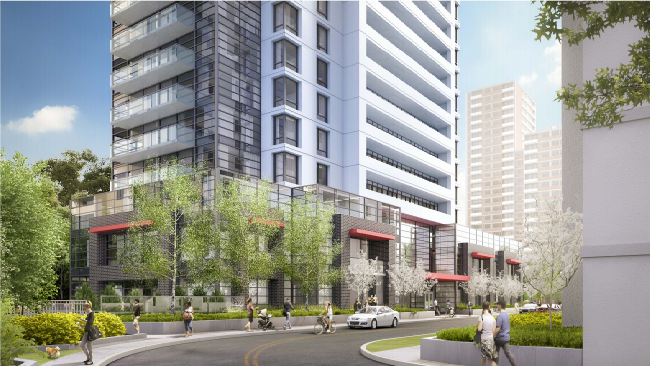 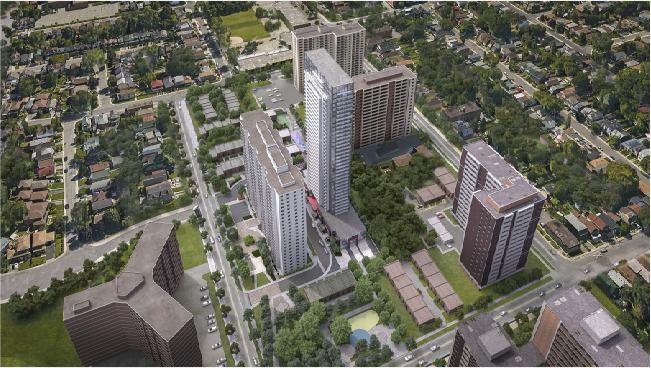 This is not at all what the community agreed to at an earlier time.

A really decent proposal had come together to site a new building roughly on the existing City park at the corner of Eastdale/Lumsden as well as on the site of the adjacent townhomes.

As part of that proposal, the townhomes at the south end of the site, Secord/Eastdale were to be removed for a new, slightly larger and more usably shaped City park.

I have real concerns about where this new building is sited, visually, it seems to be crowding the existing tower.

But you also have the issue of the building not touching a public road, ie. hidden off, in behind existing towers, and that strikes me as quite problematic.

Looking at the application cited by AG above...........the renders don't seem to match, to me.

Do we know if these are the most recent?
Last edited: Sep 7, 2016
An environmentally conscientious, libertarian inclined, fiscally conservative, socialist.

I got these renderings from the architectural drawings in the application posted by AG. But since it's been over a year, they could be outdated. Have there been any updates since?
N

Best I can tell, the current application is still 'under review'.

This appears to be the last decision of record by Council, and the proposal contained in it is the version I discussed.

The 2015 proposal is not supported by Planning, who are recommending that Council send staff to oppose it at the OMB: http://www.toronto.ca/legdocs/mmis/2017/te/bgrd/backgroundfile-104490.pdf

The case file is still open (from a previous proposal), though there are no new hearings planned: https://www.omb.gov.on.ca/ecs/CaseDetail.aspx?n=PL120274

Disregard the case file in my last post, the one for the current proposal is here: https://www.omb.gov.on.ca/ecs/CaseDetail.aspx?n=PL170275

Huh?, why is everything going to the OMB lately