New to the AIC is this intensification proposal for a large tower-in-the-park site at the westernmost reaches of the City of Toronto, directly opposite Markland Golf Course, on Bloor Street West.

Site as it is: (Streetview, Markland frontage): 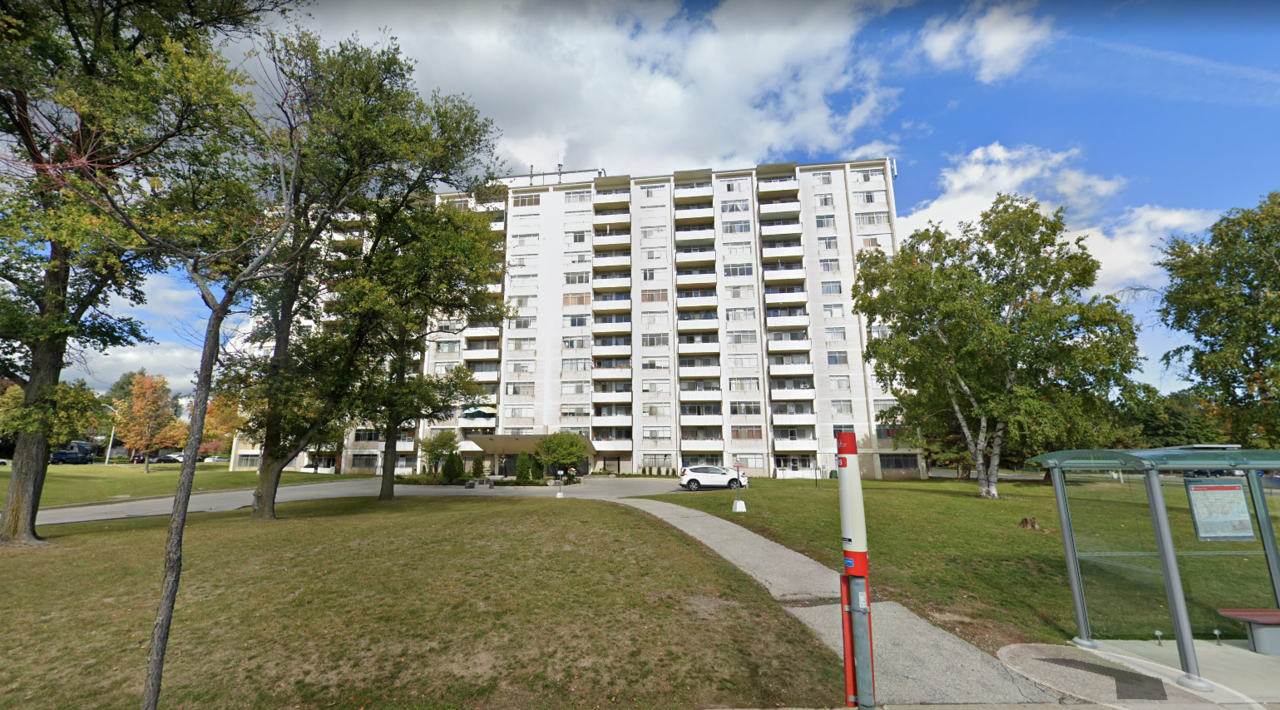 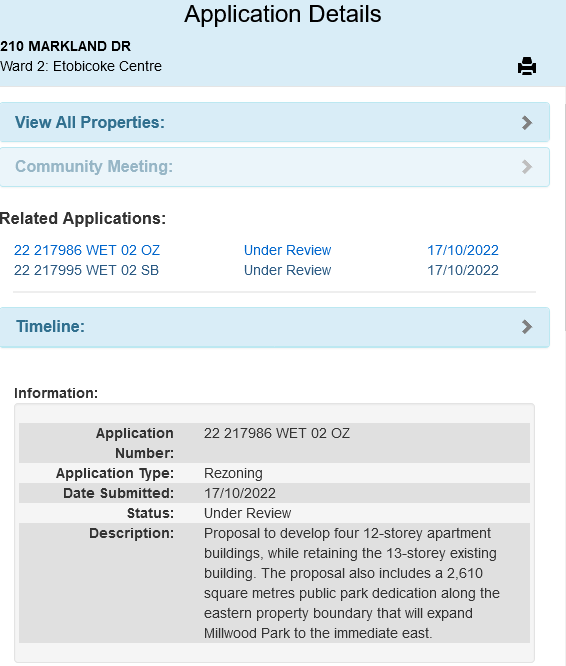 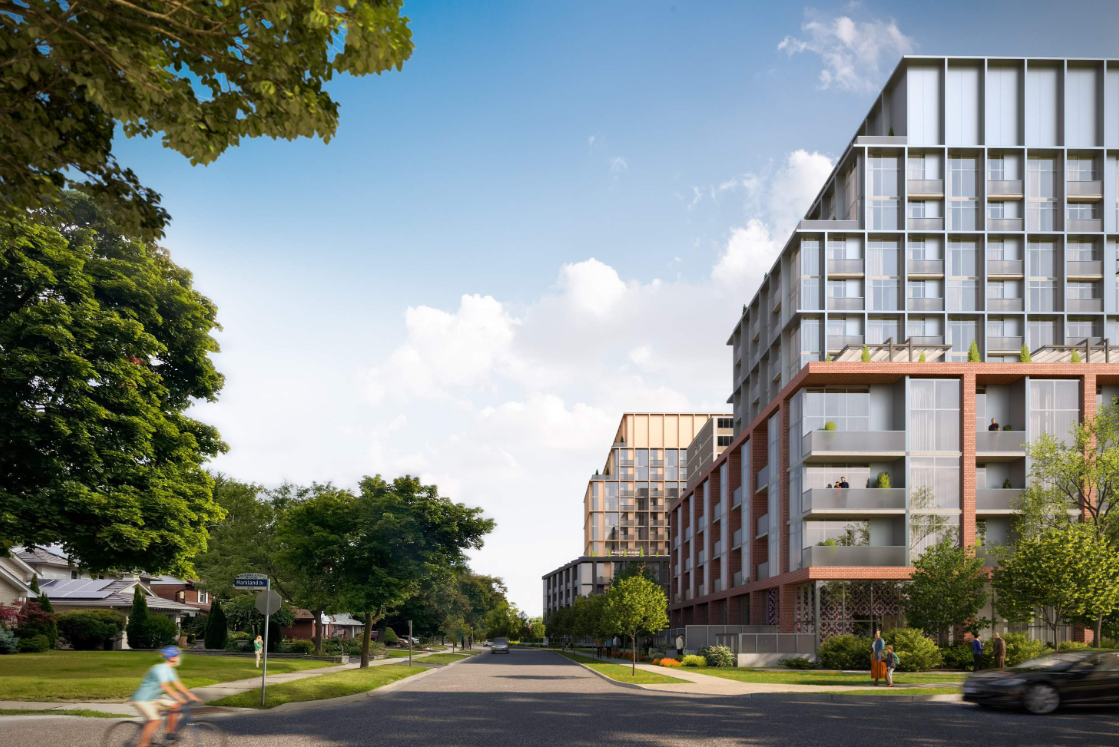 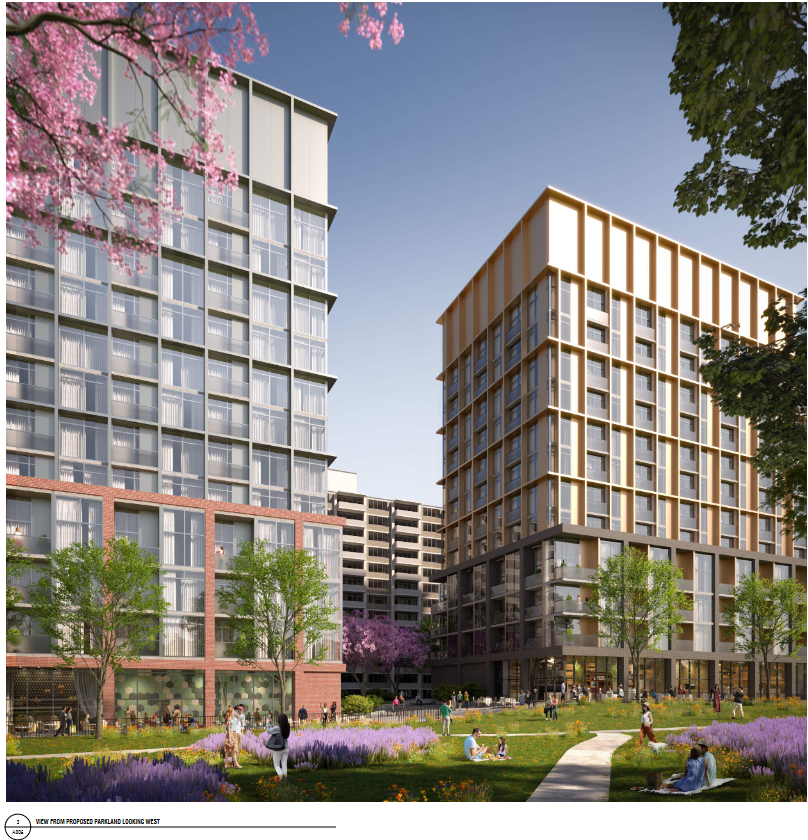 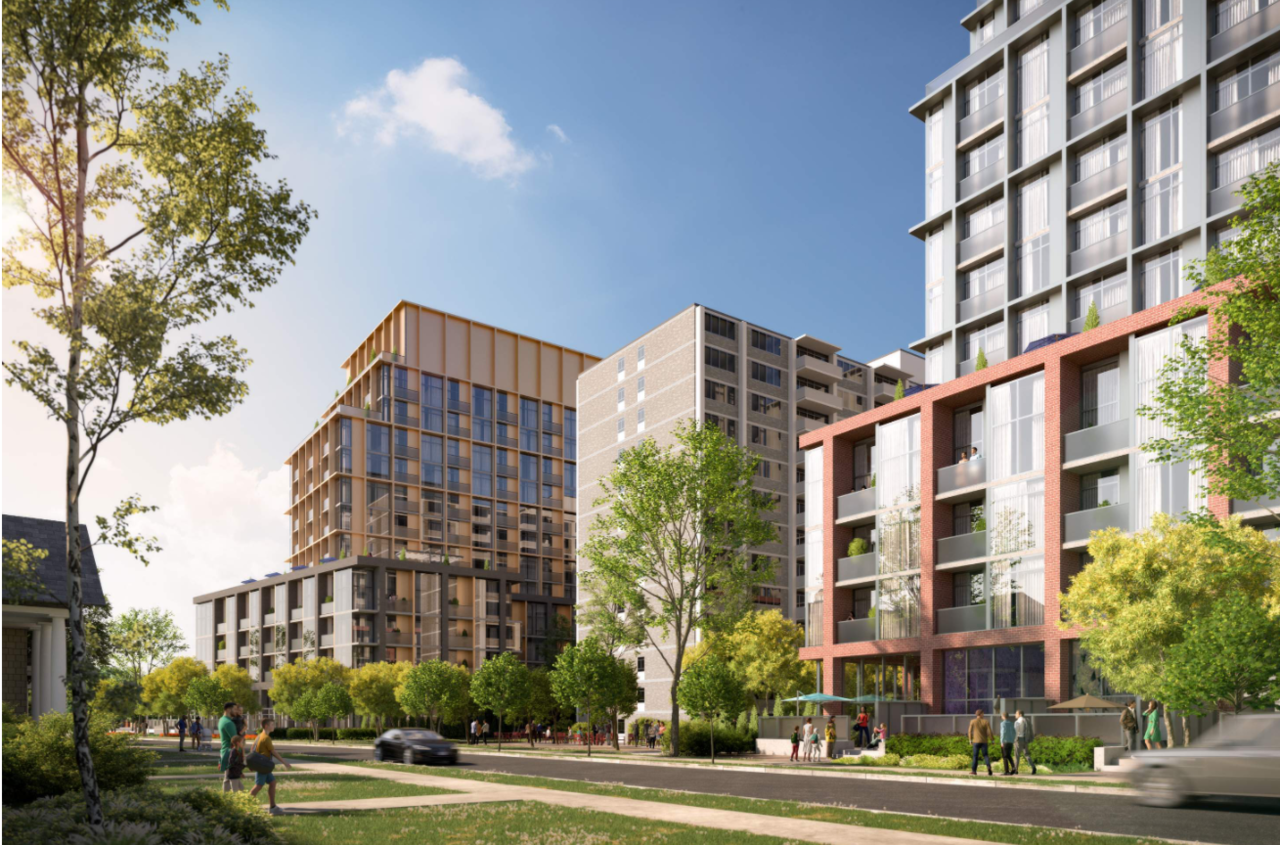 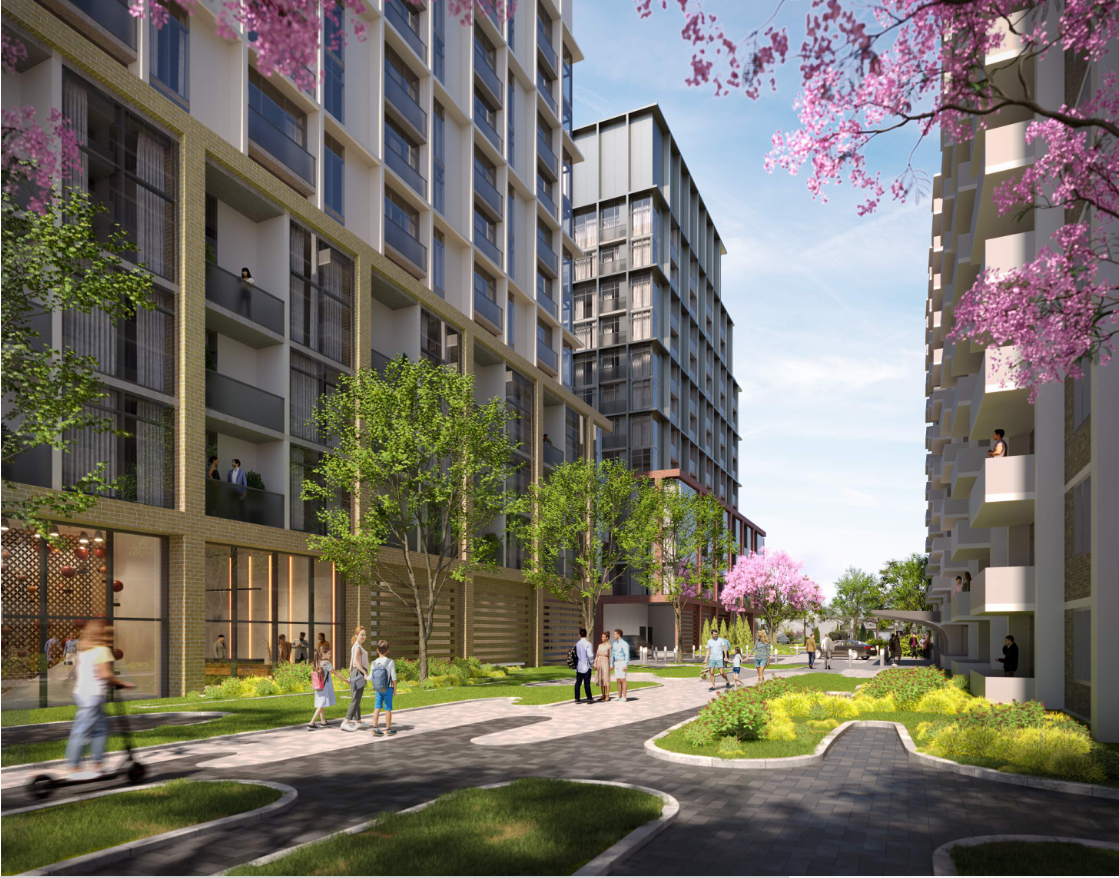 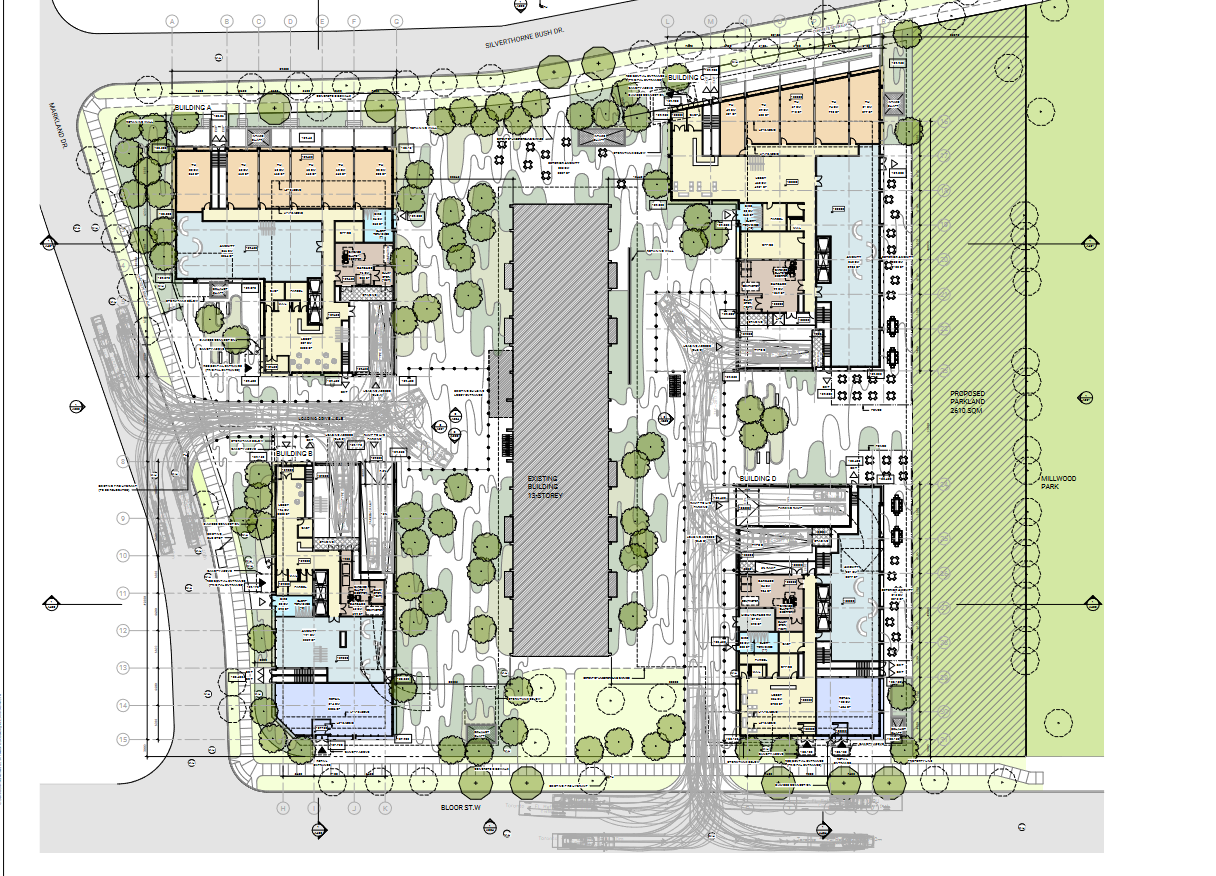 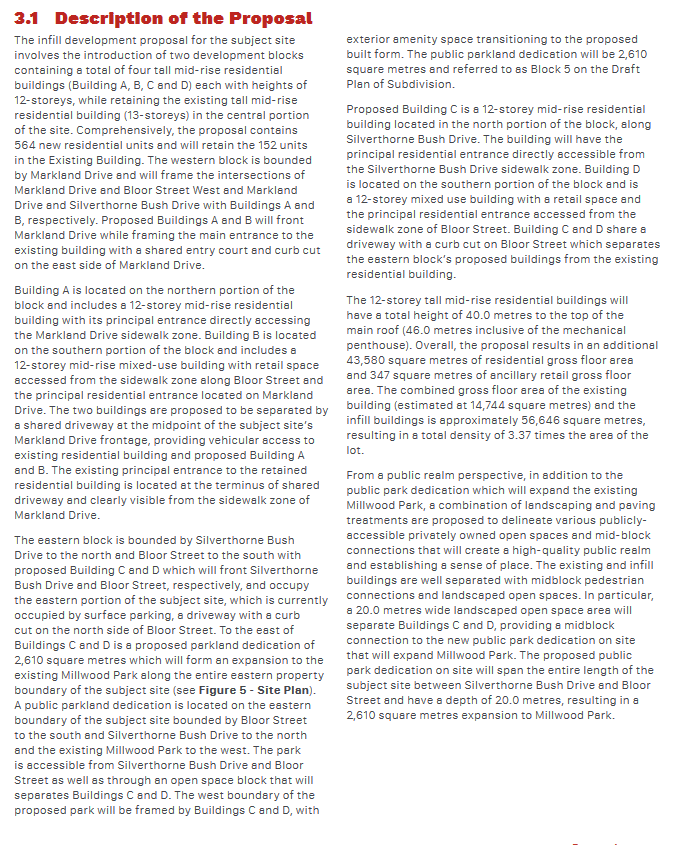 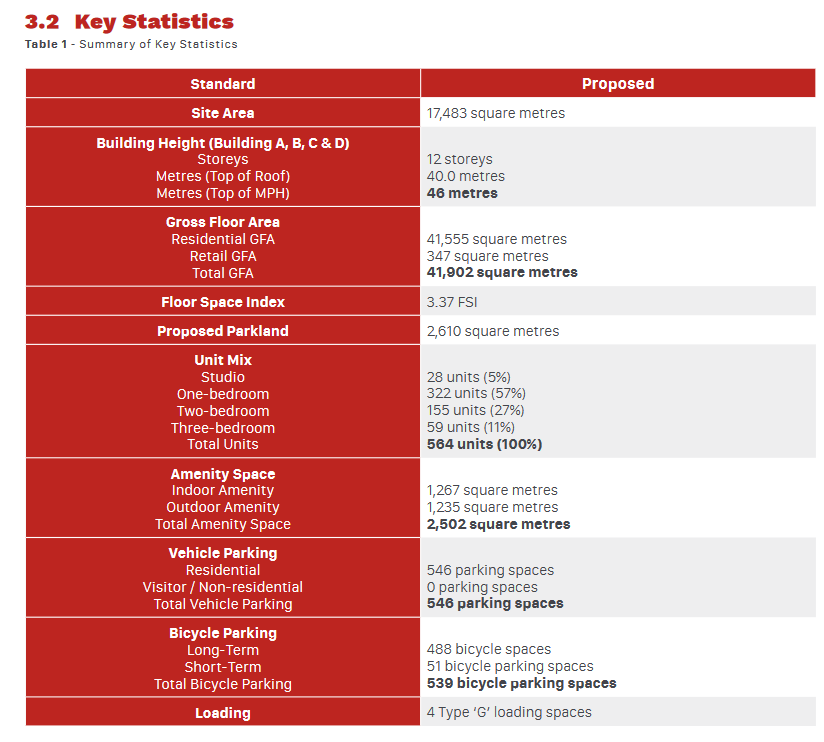 There's a lot to like here. Solid infill, significant new density, but in no way over-bearing. DS has done a nice job w/the Architecture side of things here, and of particular note, is the way they've handled the illusion of scale along the northern and southern flanks of the site, where they've made the buildings 'feel' like 4-storey, human-scaled structures, while still having them rise 12s total.

Also nice to see a usable Parkland expansion here, adding to the existing, adjacent public park. The dedication is unencumbered (non-strata) which is good. While the narrow width (20M) isn't ideal, because it's an expansion of an existing park there are a variety of ways to take good advantage of it.

For the westerly 1/2 the of the site, the separation distances meet the minimum requirements, but just barely, and a bit more space would be nice, but this doesn't appear plausible at the south end of the site, (the building wouldn't work if it were slimmer and it can't really be shifted west), not a deal-breaker by any means.

Architecturally, it would be nice to see some of that human-scaling seen at the south/north flanks of the site, in its interior, between the new western towers and the existing building, but again, tight spacing would seem to preclude that.

The parking here is rather high, and perhaps that should be given a second look; though, at 3km west of Kipling Station, and lacking a major N-S bus route, it is, perhaps, understandable here.
Last edited: Nov 17, 2022
An environmentally conscientious, libertarian inclined, fiscally conservative, socialist.

This is the area of town that I grew up in. I've been wondering how long it would be before this site was proposed to be intensified. There are similar Tower-in-the-Park-style buildings nearby (like the Renaissance Apartments site immediately across Bloor to the south) for which there are already intensification proposals, and this site easily has the most waste space of all of them.

(I have an aunt who lived in this building for a while, and when just older that a toddler, was sent outside by her to play during some kid-sitting… so at a young age I found out that the vast lawns around these buildings provided next to nothing of interest to offer. What I loved was Millwood Forest, across the baseball diamonds in the adjacent park to the east. Now that's good play space…)

I expect that the Markland Wood Homeowners Association will be apoplectic about how much more density is proposed here; nimbys gotta nimby, of course. They'll call in particular for the two buildings fronting Silverthorne Bush Drive to be reduced in size…

…but the area needs this and the other TITP intensifications to go ahead. When I was a kid, the Bloor West 49 was a frequent enough bus that you were never stuck waiting too long for it. Now, both it and the Burnhamthorpe 50 come about once a day, or so it seems. (The MiWay buses on the two routes are now more frequent, but of course we're not smart enough to rationale services across municipal boundaries here…) This area is classic yellow belt, and the number of kids has significantly dwindled over the years while the older generation has aged in place to a great degree, so it's hollowing out, and an influx of population is needed to stabilize services.

I hope these are approved at this scale.

PS In regards to the new strip of proposed parkland @NL, there's a nice line of trees along the edge of the park and the existing apartment property. Not sure which side of the property line they are planted on, but it'll make for a very nice addition to have landscaping under the west side of the trees, not surface parking the way it is now. There's a bit of a playground on the other side of the baseball diamonds, but I don't know how new it is, and I'd suggest using some of the new parkland as new playground and fitness equipment space.
claditor spandrelgrise!

An acquaintance of mine lives here. I'm sure he's having a conniption.
M

This is really great. Need to see more of this across the city. Would be smart to include a few retail units along the Bloor St. frontage so residents can pick up some basics without getting in their cars.

milkycontent said:
This is really great. Need to see more of this across the city. Would be smart to include a few retail units along the Bloor St. frontage so residents can pick up some basics without getting in their cars.
Click to expand...

If you read our recent front page story, 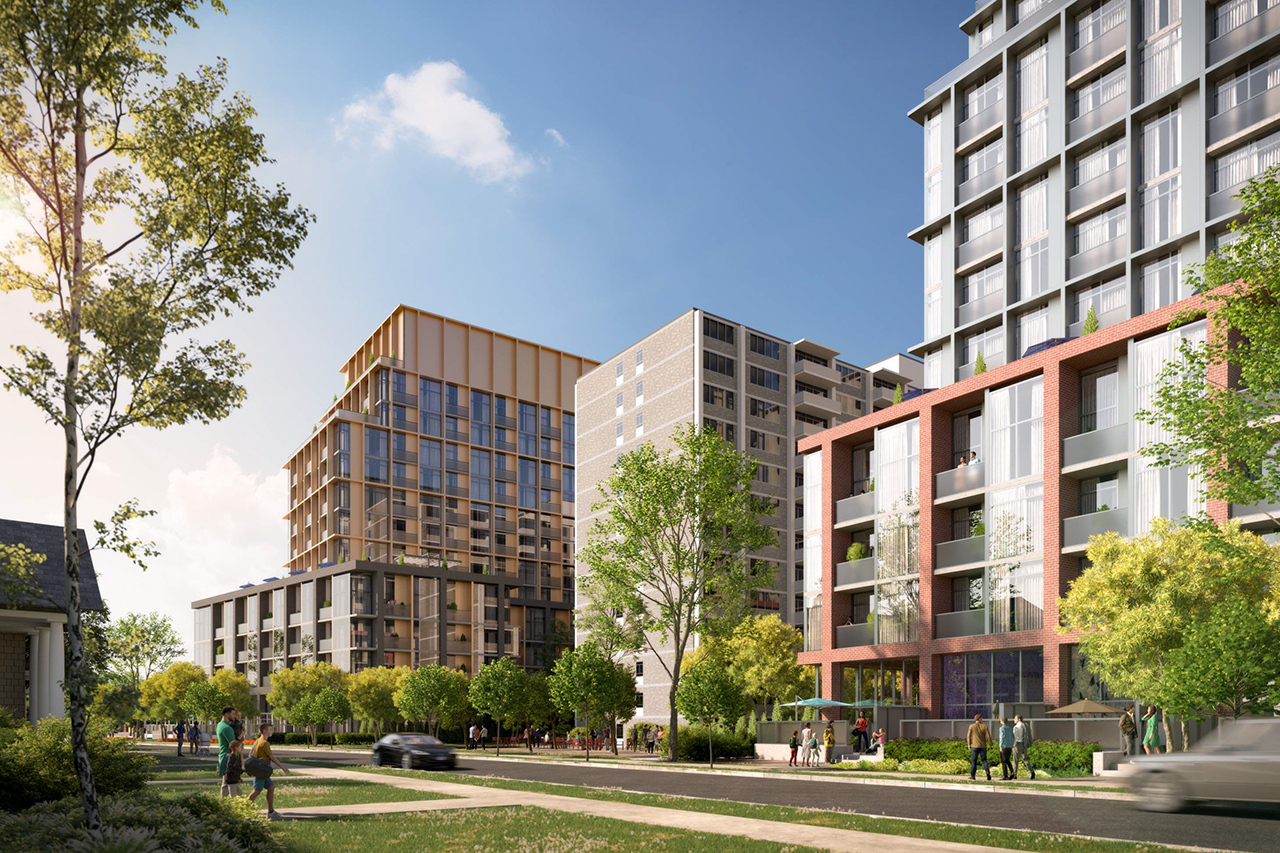 A tower-in-the-park site in the Markland Wood neighbourhood of Etobicoke is proposed for intensification with four new 12-storey buildings surrounding an exiting 13-storey rental apartment building, while adding new park space to Millwood Park to the immediate east.

you'll see that they are proposing exactly that!

interchange42 said:
If you read our recent front page story,

A tower-in-the-park site in the Markland Wood neighbourhood of Etobicoke is proposed for intensification with four new 12-storey buildings surrounding an exiting 13-storey rental apartment building, while adding new park space to Millwood Park to the immediate east.

you'll see that they are proposing exactly that!