Not to worry... the very nature of their business, with its slender profit margins, will soon enough see them cave under the redevelopment pressures steadily building along Church.

Docs are up. Depressing Graziani garbage. 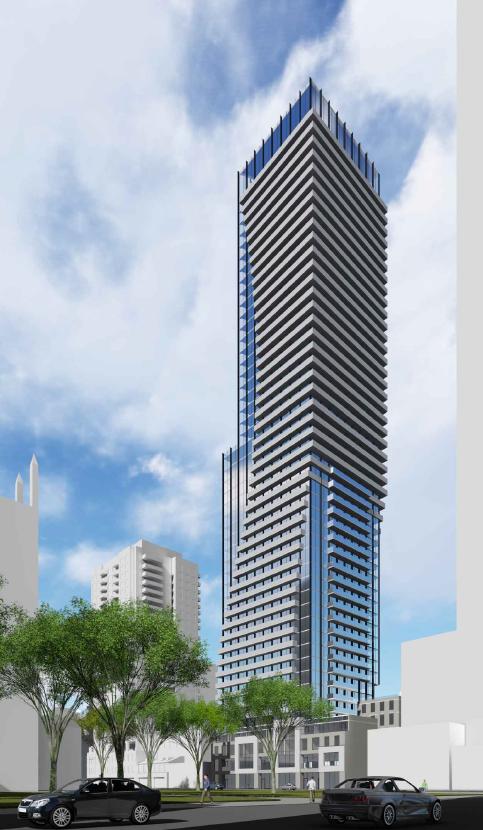 Who could possibly be proud of this nonsense?

Probably the same people who are proud of Time & Space. Oh, that's Pemberton too!

We have put up a front page story with a number of images and details—including a look at the area of the building being cut away so that it does not intrude into the St. Mikes helicopter flight path, plus there's a new database file with even more images.

The database file and thread now have the title 18 Dalhousie instead of 139 Church as the front door for the condos is on Dal. The whole assembly has addresses for 139 through 149 Church Street, which can be used for up to 6 retail outlets along that street, and 18 and 20 Dalhousie. I assume they'll chose 18 over 20 for the front door to appeal to Asian buyers.

I know people complain there are too many boring 'boxy' projects in Toronto, but I'd gladly take a clean, modern 'box' over this every single time.
P

I am alone in this but I rather like the idea of this one. It’s not bad if materials are of good quality.
N

It's not merely that it's grim or garbage, though I have no real problem w/either description. (I've seen worse......but that shouldn't be confused with a passing grade.)

It's that it lacks any reference at all any to the neighbourhood context.

I don't need the building to be brick or stone, in the tower or the podium, though if done correctly that might work well.

But if going w/something modern, show me some realization of context. How does this reflect the church across the way? Or the typical (historic and otherwise) shops along the east side of Church, not all of which were grungy.

It needn't be a borrowed reference, rather just a clear indication that it's trying to be complimentary.

Besides that show me something vaguely interesting and not entirely derivative, worse, derivative of banality.

This is actually worse than the 2 Carlton proposal.

There are elements of this proposal that I like, granted, it’s a bit of a mess as it is. I like the deference to the flight path, which, in an odd but interesting way, does acknowledge its surroundings. I absolutely loath the current state of Church and Queen (Queen Street East all the way to Parliament Street is painfully decrepit actually) so I’m happy to see any proposals that attempt an improvement. Hopefully, this proposal will be improved as it evolves.

Northern Light said:
It's not merely that it's grim.
Click to expand...

How about “the Humber Bay zoo called, one of its condo towers escaped”.

The design looks confused.
A

I dont think G+C is capable of anything that's not copy+pasted from whatever previous design they came up with for any other given development. It's literally copy+paste multiplied by 100 with a few subtle changes here and there.

Can developers stop going to them so they can finally go bankrupt already.

It's got some flare to it !

This may be the ugliest proposal I've seen on UT since this beauty: