What is the city getting for letting them appropriate these two parking lots? Did I miss something?
M

I would imagine Green P like any other company. They own and also lease property.
got some ice to sell you

I wasn't suggesting they got the Green P sites for nothing... I'm just wondering what the city got in return for them?

If the City leased them from an owner and that owner decided to sell, there's nothing that needs to be 'given' to the City in return...
Twitter

True... I'm making the assumption they owned that land. I never considered that they might be leasing it.

Legally speaking, Devron Developments and Great Gulf's Downtown Toronto project at 101 Spadina Avenue does not yet exist. That's because no formal application has been made, and no documents have been submitted to the City. However, much is already becoming known about the 47-storey, Diamond Schmitt-designed tower, with a preliminary iteration revealed to the Ward 20 community in March. Two months later, the project continues to be refined in advance of a submission, with Toronto's Design Review Panel invited to critique the plans so far.
Click to expand...

The site as seen from Gläs: 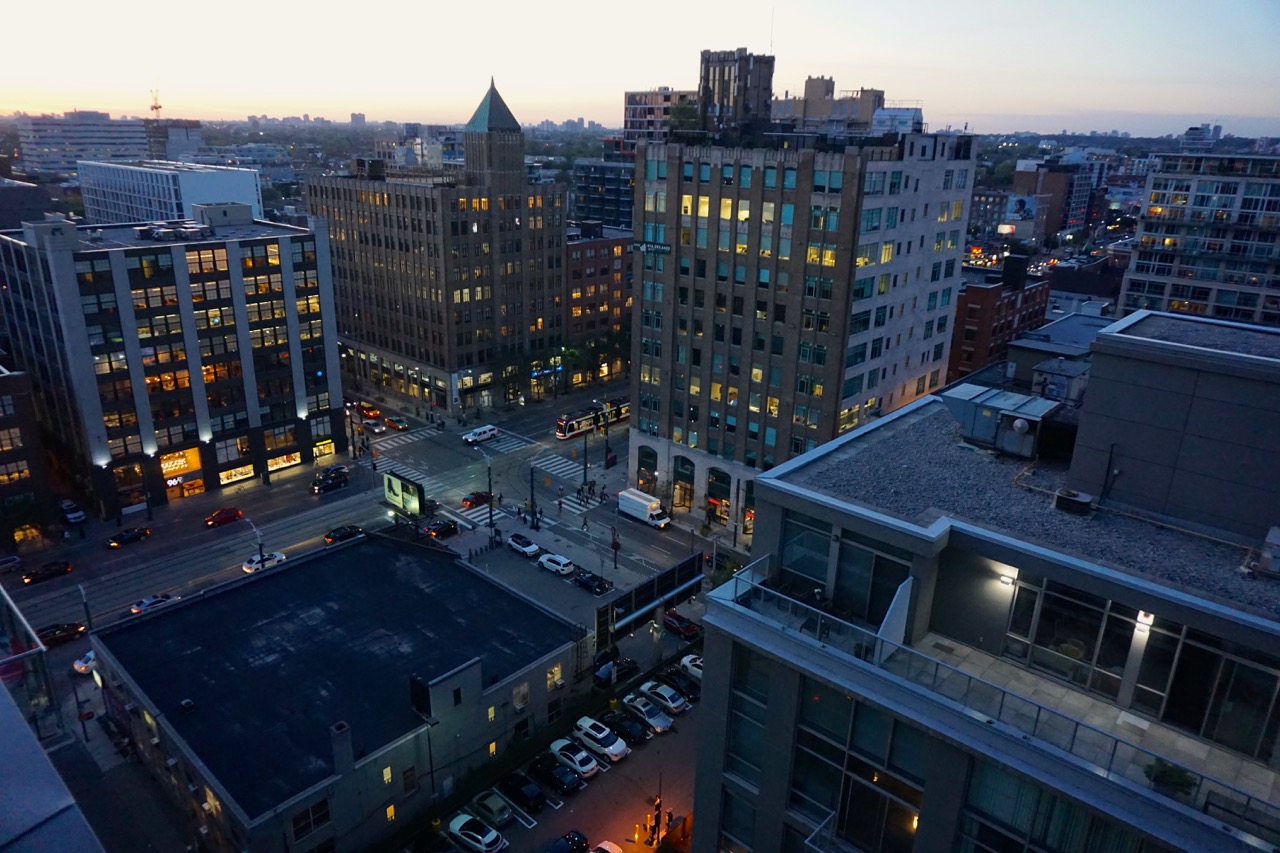 If there was any life in this site I think the recent Council approval for turning the Green P into a park has snuffed it out:

I'm not sure I'd assume that right away.

The city is getting more stringent about on-site parkland and this is the dedication for Theatre District Condos (8-30 Widmer St.). That said, Devron aren't just going to give up on a good, viable site unless they get a good offer - the kind of offer that's likely not going to come in raw cash from the city, but could come as a combination of money and entitlements (ether here, or somewhere else). Cityzen have been trying to vend their Charlotte site for quite some time now and if Devron could get a hold of that - with appropriate zoning permissions - they could still make out ok.

Interesting that in none of the pressers mention 101 Spadina, the building. 105 Spadina is the parking lot at the corner.
Twitter

Judging by the size mentioned in the report, it is the two Green P lots here that split the block in half, with the first phase being the smaller lot on the corner.

I can imagine Devron doing a swap with the city for their property on Spadina for the Green P farther internal to the site. The city would end up with a square, much more useful park, and Devron could retain the tower potential of the site by maintaining one contiguous property instead of the city splitting its property in half with a park.

If you add the parkland dedication of a theoretical Devron development on top of the existing Green P area, you end up with a park of about 1,500sm. Not too shabby.

This morning, August 9, in the laneway on the west side of the 355 Adelaide portion of the overall site - soil sampling underway. 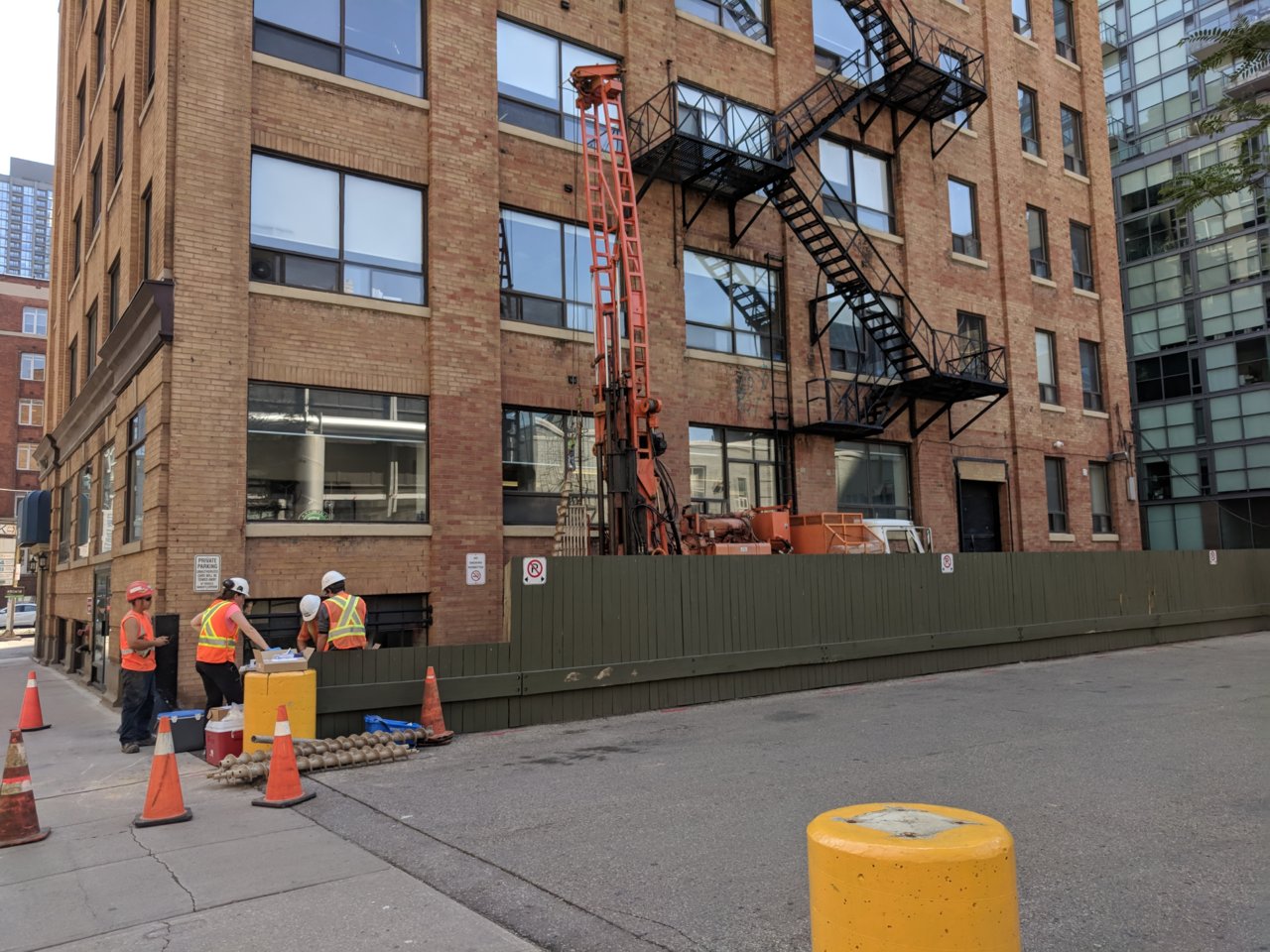 I am writing in support of recommendations by the Chief Executive Officer of CreateTO to leverage the value of the City-owned surface parking lots at 105 Spadina Avenue and 363 Adelaide Street West in the rapidly growing King-Spadina neighbourhood to secure a new 1,000 square metre public park, as well as funds to create approximately 25-30 new affordable housing units. This is an important city-building opportunity that I have been working to advance for many years.

The success of downtown Toronto impacts our whole city. The downtown area currently produces 51% of city's GDP and 25% of tax base, and contains 33% of jobs, 38% of residential development, and 40% of commercial development in Toronto. It is vitally important that we ensure our downtown communities are vibrant, liveable, and sustainable.

The City’s new Downtown Secondary Plan has identified significant needs for additional community infrastructure to keep pace with population growth. The King-Spadina neighbourhood, where these parking lots are located, has been one of the fastest-growing areas. Bounded by Queen Street, University Avenue, Front Street, and Bathurst Street, it has grown from a residential population of only 945 residents in 1996 to an estimated population of 22,000 in 2018. Based on the development pipeline, an additional 30,000 residents could move to the area in the coming years. This community is also home to an estimated 46,000 jobs (2018) and many additional students and visitors each day.

I have been working with City staff since 2015 to find a way to make better use of these public lands, and I have been supporting ongoing conversations with the adjacent property owners, City Planning, Parks, Forestry and Recreation, and CreateTO since 2016. I hosted a pre-application public consultation meeting in March of 2017, attended by many area residents and businesses. The proposed 1,000 square metre public park will be the first new park of its size in the densest part of the neighbourhood since the area began to grow more than 20 years ago.
Click to expand...

A flyover of the area: