This proposal is very similar to the one at Eglinton & Laird. I wonder if they'll redevelop all of Eglinton Square or just a portion of it.

Very interesting spot for a potentially transformative project. Will be interesting to see the plans.

think of the seniors

Yeah, very curious. Five blocks may be difficult to implement with the mall however, it's not enough for the whole site. This site deserves something better, more intrinsically urban than the usually tower block plan.
got some ice to sell you
W

This has potential to be transformative for the area. With the Crosstown coming, it will be very desirable location, let's hope they get this right!
~ Resident Midtown elitist and PATH enthusiast

Documents are now up on the Dev App site. The Eglinton Square mall will essentially remain untouched. 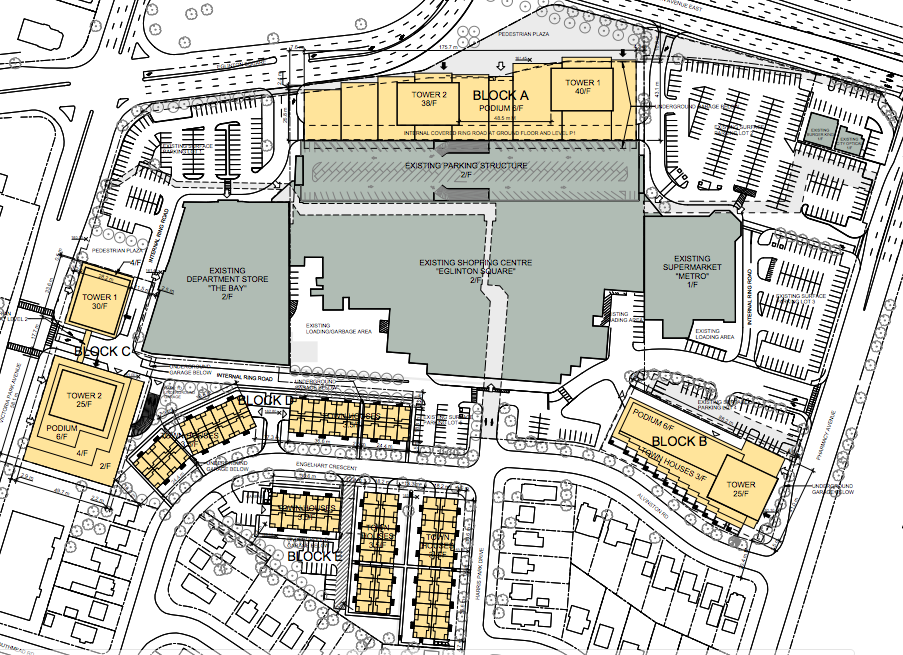 Only rendering I could find: 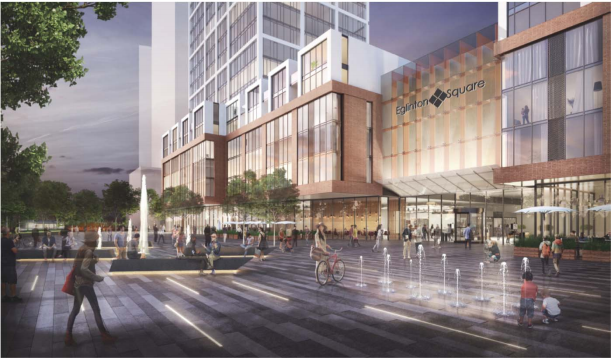 I was thinking the exact same thing. could they not put the surface parking at the back of the building if they needed to have it. I guess they don't want people to think the suburban mall no longer exists.

The Metro parking lot (east) is not part of this application and The Bay has an exclusion zone across their part of the lot (west).
Twitter
N

@ProjectEnd almost certainly know more about this site's oddities than I do.

So I will stand to be corrected if some of my suppositions are in error.

But its my understanding that the corner of Pharmacy/Eg , w/the Burger King is not owned by the mall ownership group.

I also made the observation, some years ago, that when Eglinton Square first upgraded its parking lots to the contemporary lighting and landscape, that they
didn't do the lot beside the Bay, or the one beside Metro.

At that time, I was given the impression of either ownership issues or some form of lease rights that held that up. (the parking was later made uniform, but it took several years)

* Note I just looked up the property lines on the City's website. They show the area surrounding HBC as a distinct parcel, same for the area around Metro, and the Burger King again.

The proposed layout of the site strikes me as accommodating the sorts of ownership/lease quirks noted above.

Resulting in oddities like the tower at the rear of the site along Pharmacy, all off on its own; when logically, I think, one would have put that tower right where the Burger King sits.

Curious to me, is that there doesn't seem to be a clear embrace of expanding/upgrading the mall; while also not proposing to demolish it.

I'm not suggesting that a 'regional' mall ought to be part of the plans; but if they want to keep a mall, then a viable one would be ideal.

The current one is busy in the Food Court and the Metro......elsewhere, mostly muddling along.

Better than many B-Class properties, but not where I would want it be as an owner.
An environmentally conscientious, libertarian inclined, fiscally conservative, socialist.
J

I bet the Bay and Metro probably requested some level of street visibility and parking for their stores.

Is the Burger King part of the site? There's a dotted line and perhaps it might not be part of mall property.
A

I always wonder how this Bay location even makes money..

We have a front page story up on this, along with more and larger renderings, and yet more views in the dataBase file linked at the top of the page. Pretty good intensification of the site if you ask me. More Crosstown LRT redevelopment projects of this quality please!

I love the idea of the public place.
It will be a great bonus for the project.
Architecture is the power of a city.

am29 said:
I always wonder how this Bay location even makes money..
Click to expand...

I've often wondered that too. I'm not at Eglinton Square very often (about once a year when my mother-in-law is in town - she likes it), but when I am the Hudson's Bay store seems to be busy, so maybe it does better than we think.

I have never set foot in that mall. I'm rarely in that part of town, but when I have been, it has never looked remotely inviting to me. Step through those doors and you're transported to 1970s suburban dream America for all I know. I imagine that this makeover will make much more of a virtue of the place.