The Fountains Of Toronto

Since Toronto seems to have such a hard time respecting it's fountains properly, and the forum talks about this issue quite a bit, I thought maybe it was time to start up a thread about it. I did a quick search of the forum, and didn't see a particular thread about it anywhere. Mods, if there is an existing one, please feel free to rectify the situation.
What got my gumption was not just the five years or so it's taken to get the University Avenue fountain at Queen back in working order, it's a stroll I took down the CN Tower base last week. Of course the reflecting pool there was taken out awhile ago - though I wish it were even partially back. However, it was the wonderful Salmon Fountain that is more on the Skydome property that was not just out of order - it was falling apart. It was not running, and tiles were falling off the back of it's steppes, revealing the webbing, grout and concrete underneath.
Up at the Eaton Centre, the Trinity Square fountain-stream was not turned on. Meanwhile, back down near the Bay-Adelaide Centre, the Cloud Garden Park's waterfall has not been going, and the whole thing has been clotted up with garbage. At the Four Season's hotel, what looked like it might be a fountain has been kept dry - though with that one, perhaps, I'm being a bit unfair.

Allan Gardens has a poor sort of drinking fountain where there was once a magnificent Victorian cast-iron place maker: 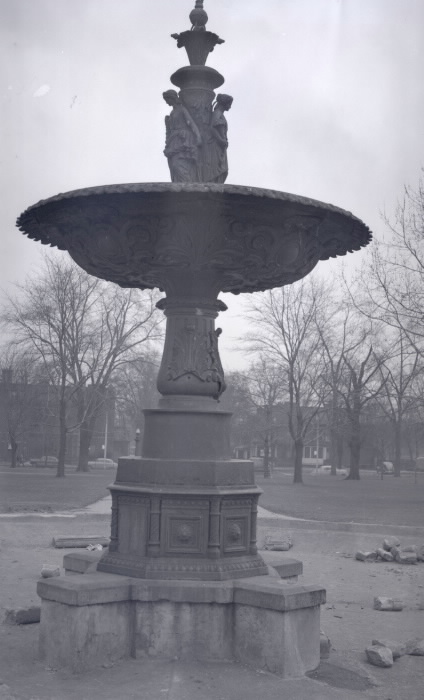 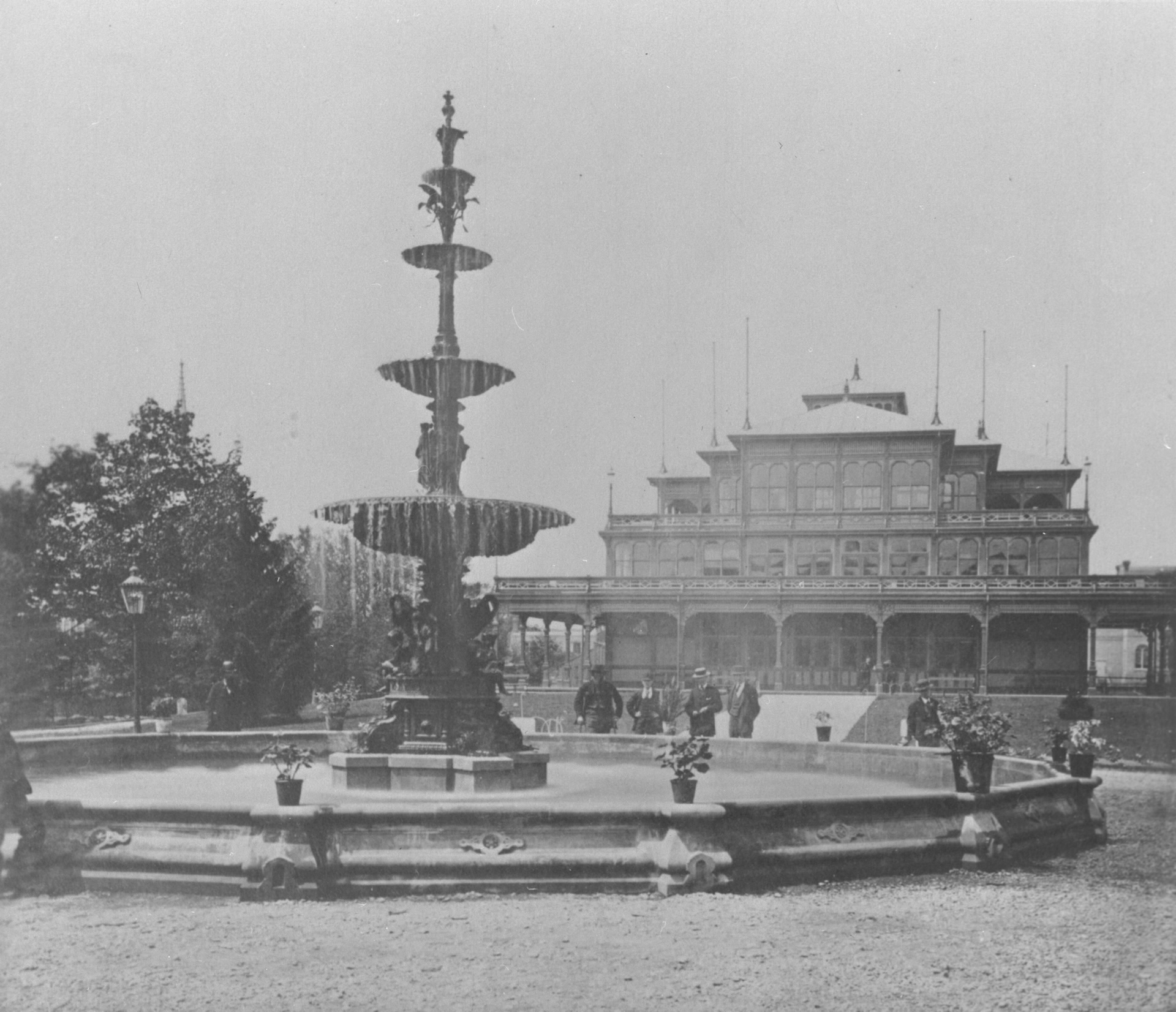 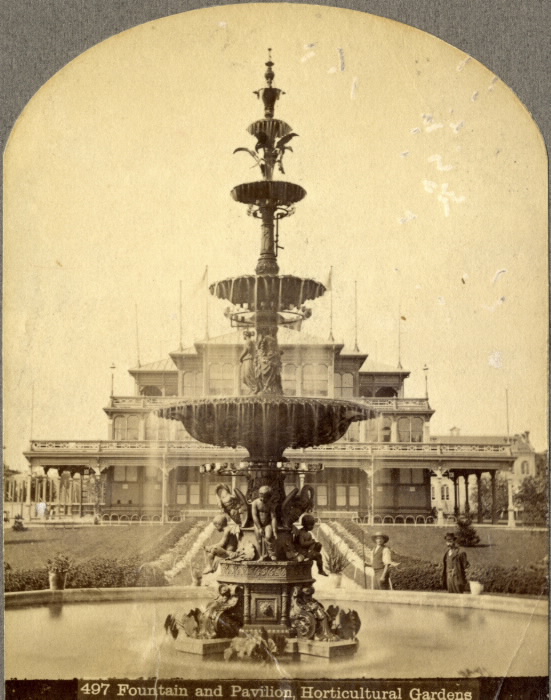 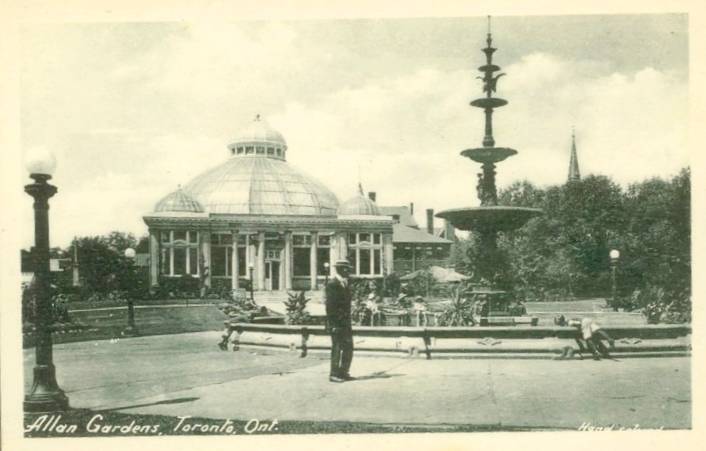 The poor old fish fountain at the Skydome, in a pic from the star, in about 2011 (it was still being 'worked on' then...) 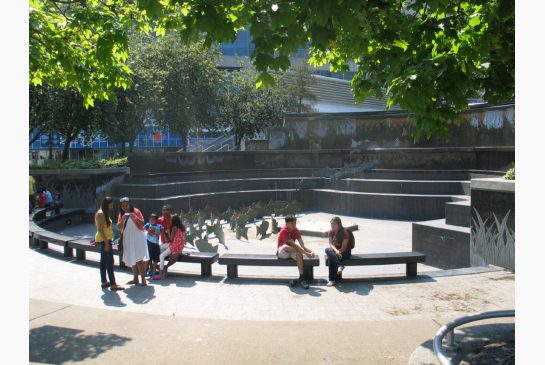 And the Baird Sampson Neurt Park, with Margaret Priest's Monument To Construction Workers... 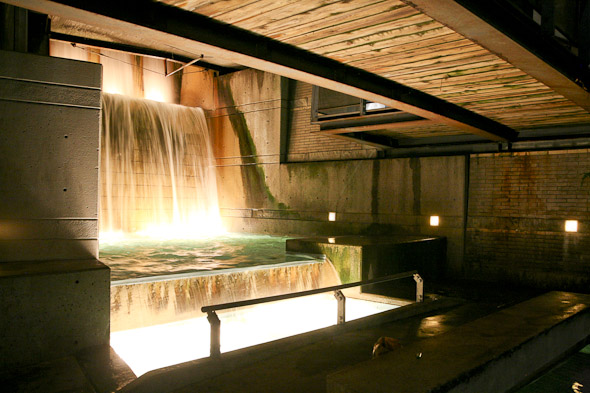 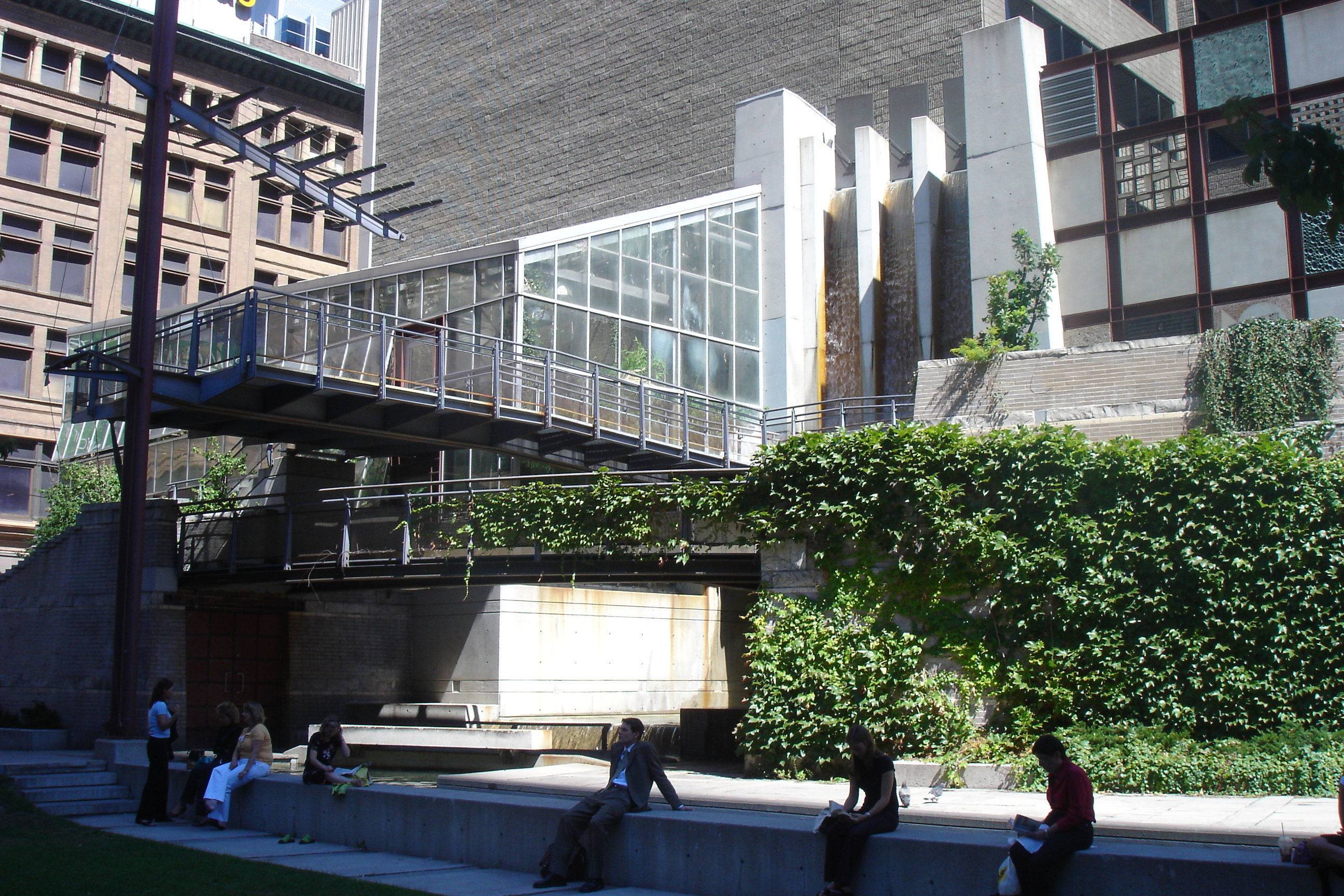 Anyone else have any favourites, complaints, or both?

The water feature at Cloud Gardens is impressive by any standard. It feels like a totally different environment from its surroundings with all that rushing water. Toronto isn't lacking in fountains, though we could use some larger and grander examples that stand out from the pack.
Last edited: May 14, 2015

And then we have the soon to be replaced Berczy Park Fountain: 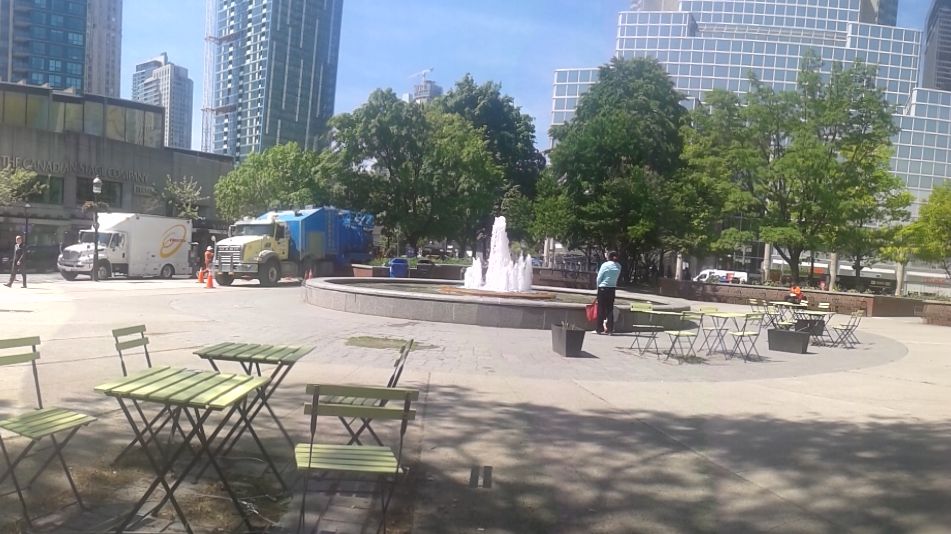 While not strictly a "fountain", there is the Village of Yorkville Park water feature: 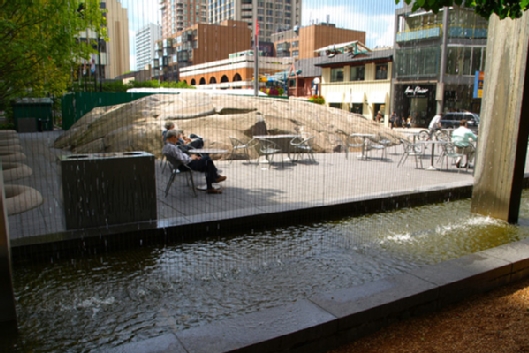 (From City of Toronto) 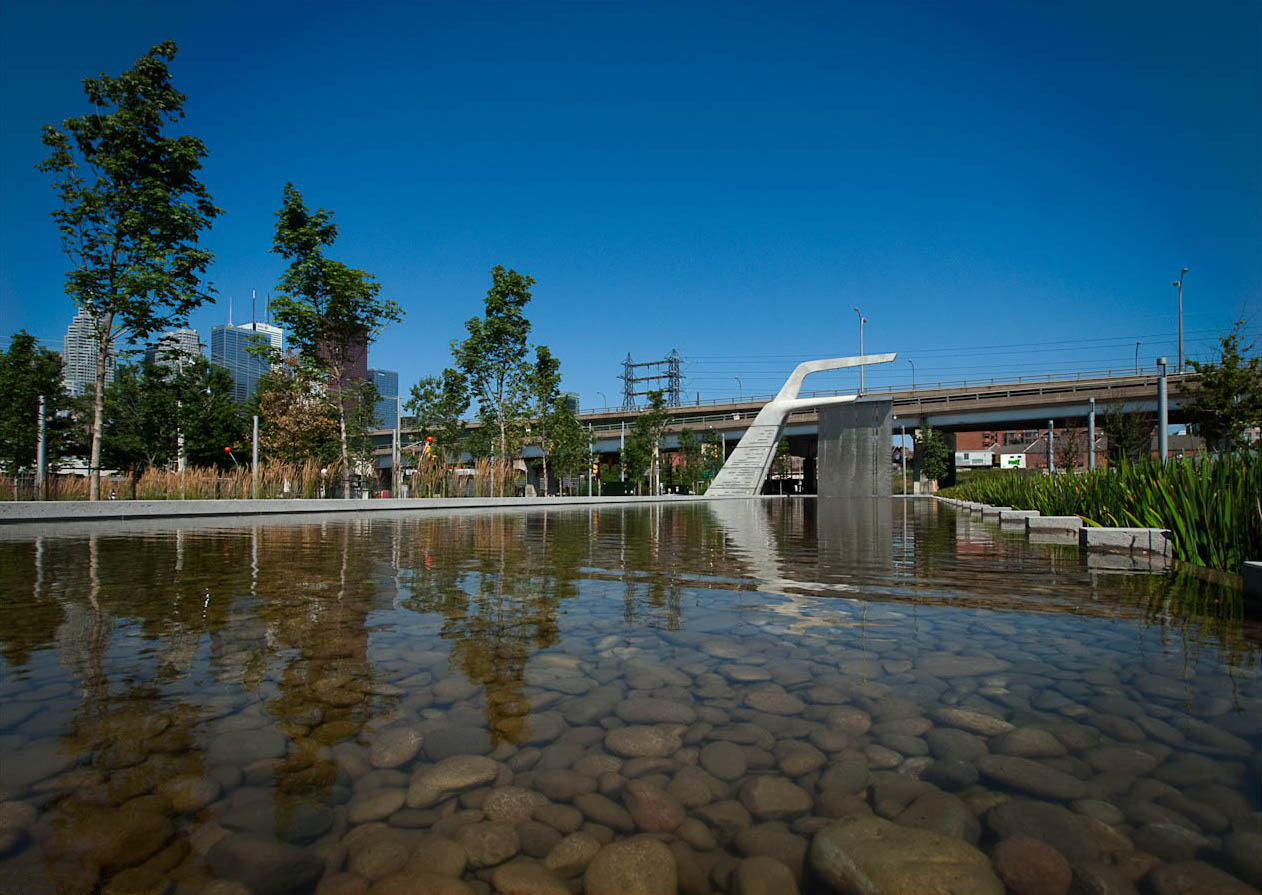 Here is one that I have never actually seen in operation: 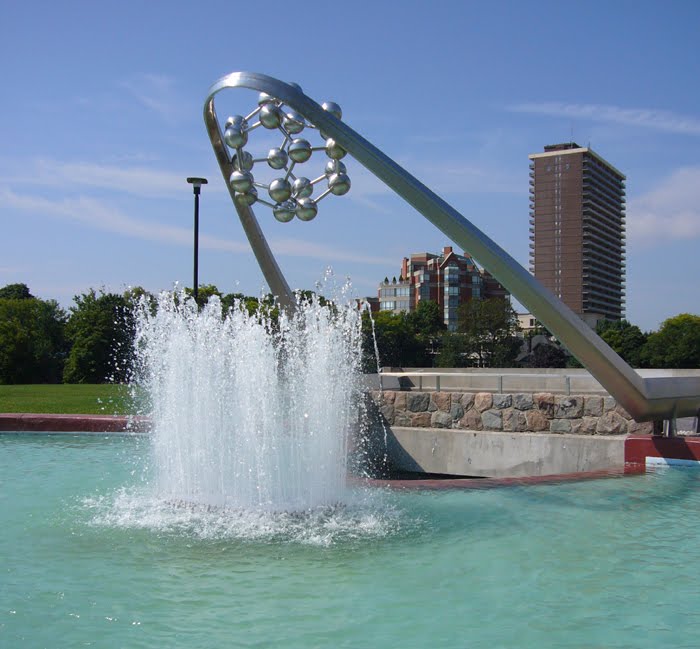 The fountain up on the Rosedale Reservoir

Oh that reminds me - recall the now removed fountains at the Ontario Science Centre? 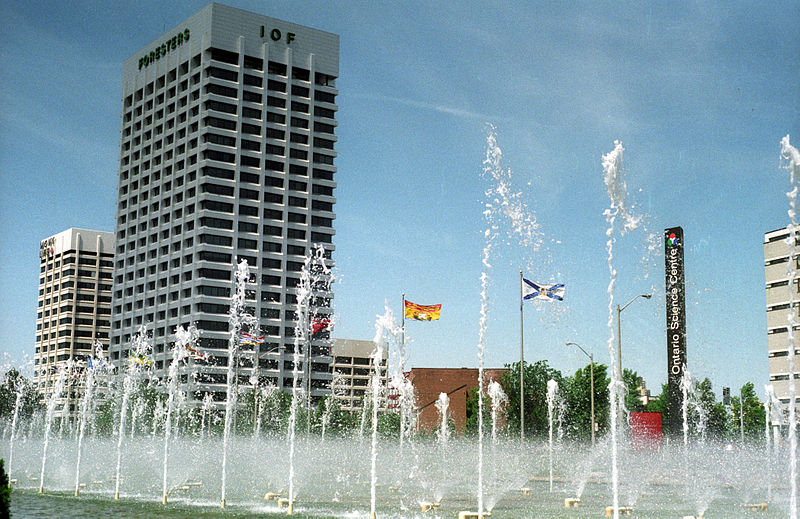 Hamilton seems to be able to keep its fountain working. It calls to mind the Four Seasons fountain, only it actually works: 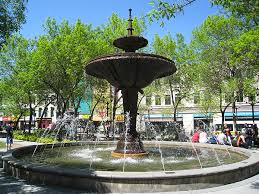 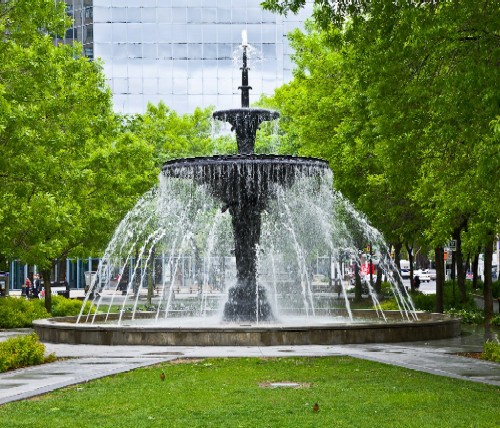 Tuscani01 said:
Here is one that I have never actually seen in operation:

The fountain up on the Rosedale Reservoir
Click to expand...

Ah, when I lived up there we always called it the Sputnik Fountain. And it's the Rosehill Resevoir.

Tewder said:
Hamilton seems to be able to keep its fountain working. It calls to mind the Four Seasons fountain, only it actually works:

The fountain in Gore Park is wonderful. The park itself is one of the most interesting public spaces in the country. The way it's surrounded on all sides by streets and then enclosed by a street wall of heritage buildings with commercial storefronts is both unique in Canada and a model for successful public spaces.

junctionist said:
The fountain in Gore Park is wonderful. The park itself is one of the most interesting public spaces in the country. The way it's surrounded on all sides by streets and then enclosed by a street wall of heritage buildings with commercial storefronts is both unique in Canada and a model for successful public spaces.
Click to expand...

The Four Thousand (4000 Yonge St) has some exquisite fountains:

One of the best:

"The Three Graces Fountain by Gerald Gladstone, 1972, was the last work
to be installed and forms the focal point of the courtyard at the corner of Bay Street
and Wellesley Street West, Toronto
Government of Ontario Art Collection,
Archives of Ontario"

This monument, depicting a winged angel holding aloft a crown of olive branches and standing upon a globe held aloft by female sphinxes, was presented to the people of Canada on June 12, 1930 by the Ancient Arabic Order Nobles of the Mystic Shrine (better known as the Shriners) as a symbol of peace and friendship between the United States and Canada. It is also meant as "an ongoing reminder that Freemasonry actively promotes the ideals peace, harmony, and prosperity for all humankind".

The monument was originally dedicated on the final day of a Shriners summit held in Toronto that year. It was dedicated by the Imperial Potentate of the Shrine of North America, Leo V. Youngworth, and formally received by Premier George S. Henry, who was the Potentate of Rameses Temple No. 33 of Toronto. Canadian Prime Minister Mackenzie King was present at the dedication ceremony and over the radio publicly thanked the Shriners for the gift to the city of Toronto and to the Canadian nation.

The statue was created by sculptor Charles Keck, who was a member of the Kismet Temple of Brooklyn, New York. A bench surrounds the statue, bearing the words "PEACE BE ON YOU", and its response "ON YOU BE THE PEACE", both of which make up the Shrine motto. The statue and bench is surrounded by a circular fountain.

In 1962 the monument was relocated and re-dedicated at its current location. It was again re-dedicated by the Shriners in 1989. The surrounding gardens and fountain were erected by the Toronto Parks Department, which was re-dedicated to the cause of peace by then Canadian Prime Minister John Diefenbaker on August 20, 1958.

It is situated immediately south of the Bandshell, and is the focal point of the surrounding rose garden.

Which replaced the Gooderham Fountain: