A public building also makes the park much more usable during the winter/fall/spring months. We need more public buildings in our parks to not only give us shelter from the weather but also provide some animation/activities for people to do year round. A restaurant/cafe would also be nice. Why not just combine community centres with parks, so we could get better use from them. Why do we build parks in a cold city like Toronto, the same way they build them in Florida and California? We need parks that respond to our specific climate/needs!

I am glad to see that hill bloclking out the Gardiner from sight and hopefully much of the sound too.

The project "Rees Ridge" was by far the best proposal in my opinion. Here are some images from City Hall (and it captures much of what Torontovibe mentions plus has a design that could potentially be manipulated to include an under Gardiner bridge to the adjacent transformation station or "High Line"): 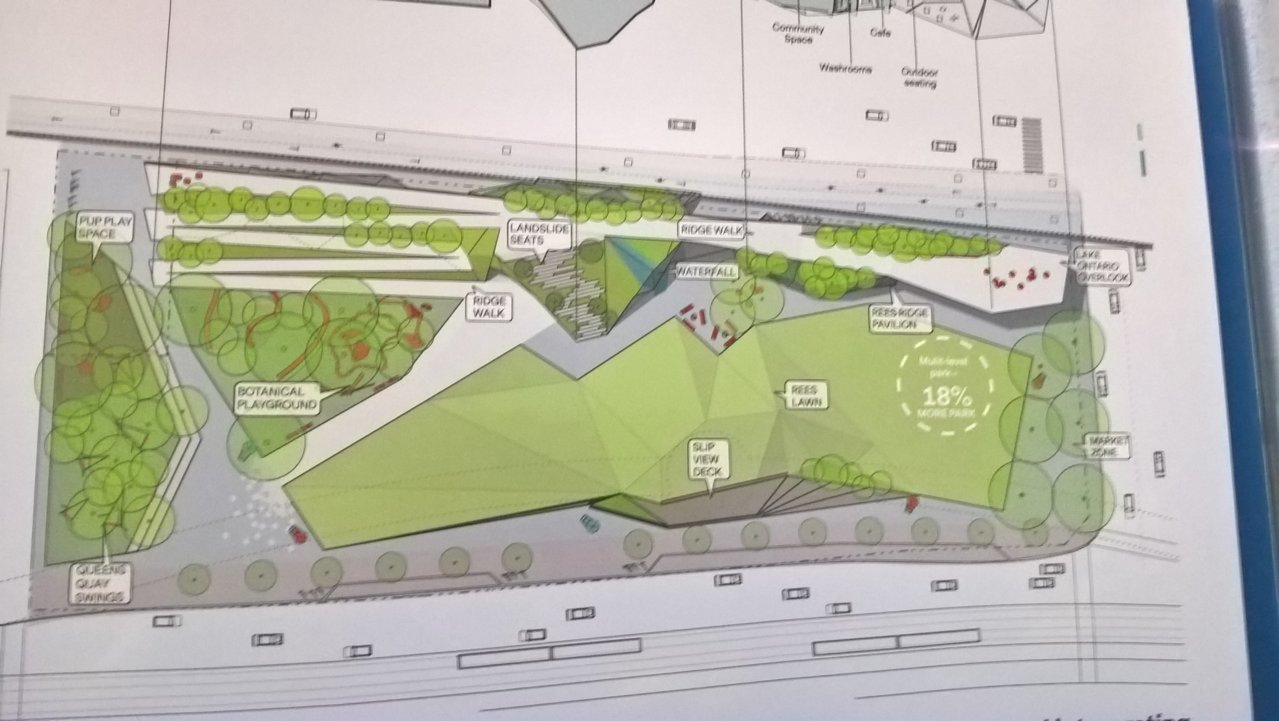 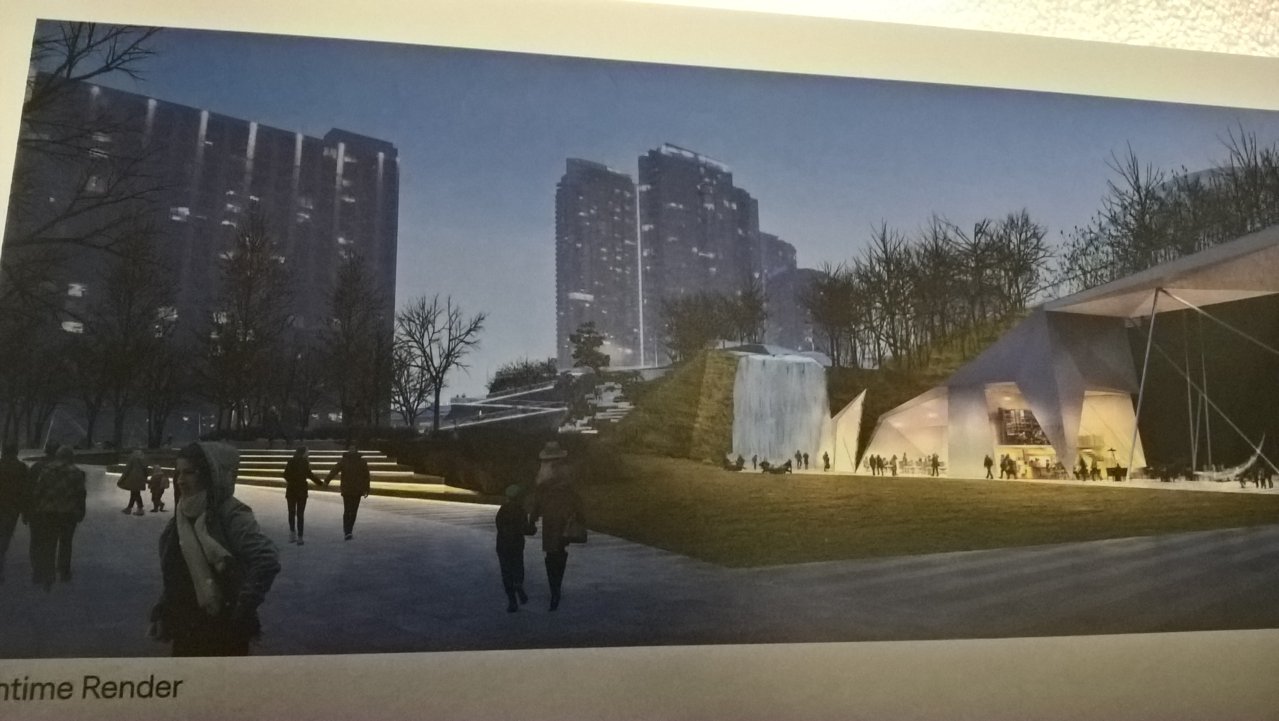 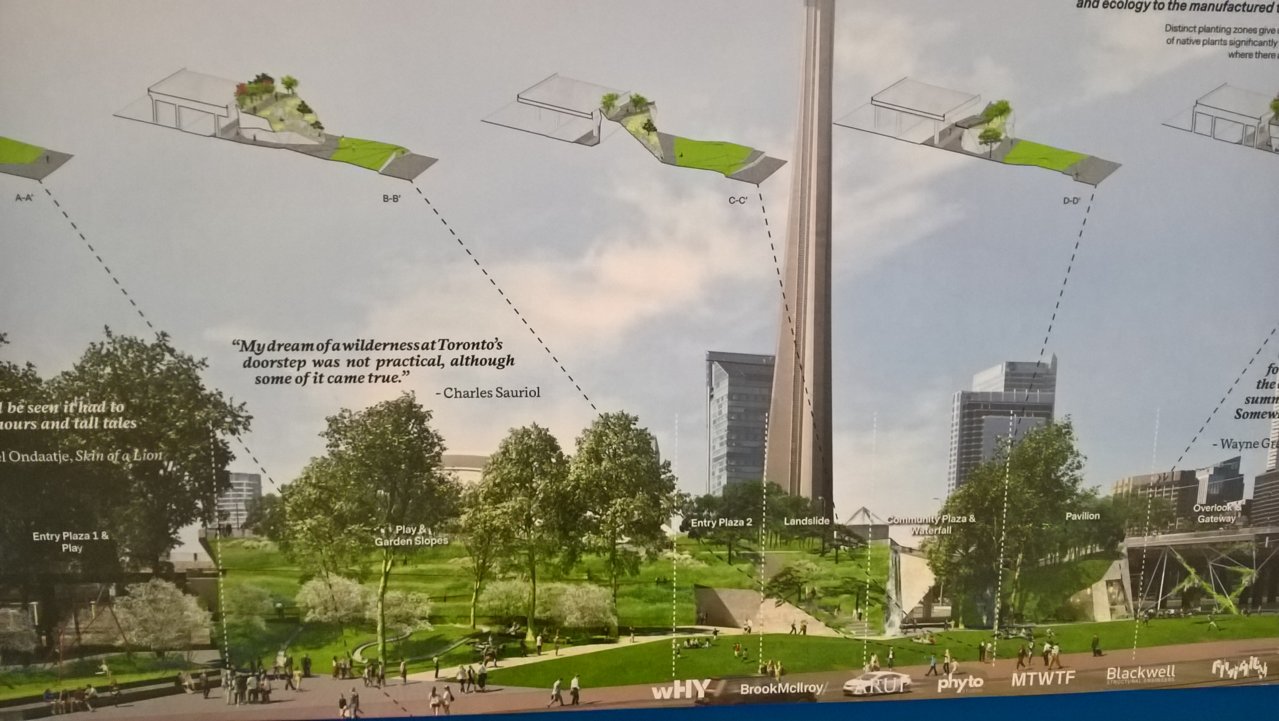 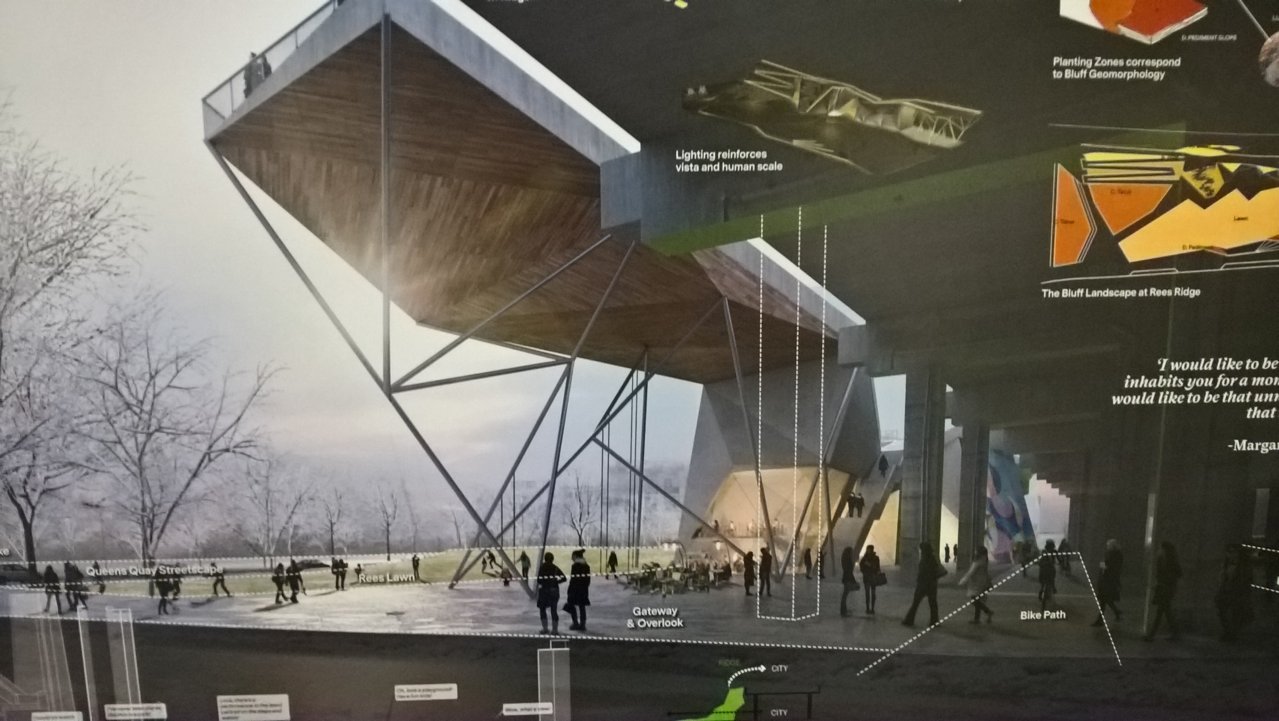 Here are the five finalists and an opportunity to provide feedback. May the best design win:

I agree that Rees Ridge is probably the front runner, it's the only one that tries to do something interesting with the site. Although it's pretty strange that the lookout point is oriented directly at that unfortunate building to the east & runs alongside the gardiner (at the same elevation no less) instead of swinging south towards the lake. Also the tube framing that supports the canopy is a bit fussy but hey, I'm nitpicking because I want to see this one refined & built.

A big yes to Rees Ridge. I love the concept of the overlook and the sight lines it provides towards the water, the Gardiner and skyline. If only they could extend it as a pedestrian bridge over the Gardiner to Roundhouse Park..

The Rees Ridge does almost everything right: blocks the Gardiner, creates engaging and dynamic scale and drama and uses native plant species. It is ambitious and damn, we could use some ambition to counter the Gardiner and the neighbouring buildings. The downside: this is probably expensive to build.

The Nest, by Snøhetta, appears to be the opposite: it does not appear to take its context into account and it's flat typography is, for lack of a better word, boring. They describe it as a creation of another Toronto backyard. Well, it's as dull as most backyards. I think we can do better than another backyard in this location. (it looks like a typical boring Toronto park. Too cruel?)

Down North is just a bit too, well, strange. It appears to have enough plantation mixed in with the "Ontario Place playground" elements to make this a "park", but I am not convinced it will be all that successful as a whole. Pine trees and Willy Wonka perhaps don't mix that well. It also does not appear to take the Gardiner or the lake into account. And except for some use of colour, it is also pretty dull.

Rees Landing has a nice big lawn. And not much else that is great. It is not all that ambitious either. It probably would be cheap to construct.

The Rees Tree Forest gets points for, well, creating a forest. Lots of trees in this location works to counter the surroundings and would be a great standout downtown. As well, the typography creates lots of interesting spaces and dramatic effects. It is probably my second favourite.

The Ridge for the win please.

Ridge for me as well. It's really the only proposal that I can see drawing crowds in. Otherwise who wants to hang out next to the Gardiner when there’s great waterfront parks right across the street?

Also kudos to the design team for outlining the proposal and its concerns in plain language rather than design speak.
Last edited: Jul 6, 2018

Rees Ridge for me too but it looks expensive to build.

Some imaginative designs. I'd prefer one of the simpler and cheaper designs but with a narrow ribbon building to block the Gardiner along the north end of the parcel. Such a building could house restaurants and cafes that can spill out onto the public square and fountain, and a community centre/small school/daycare/library could be incorporated there as well to provide services and things that will increase dwell time. If it is just a park on a hill with some overlooks and landslide seating, people will not stay for more than a few minutes, especially for colder months. Since the Gardiner is staying, we could better make it virtually disappear by building mid-rise ribbon buildings along the edges and provide things in them that people use everyday. Perhaps the guidelines for this competition didn't allow for proposals with any buildings?

Rees Ridge -- This seems like a huge expense to put a hill up against the Gardiner. Why will people prefer to dwell here rather than the abundant parks and public spaces across the street? Some of the renders feel too optimistic, much like the Under Gardiner/Bentway spaces, but especially here since there are many more competing spaces nearby that are not under or adjacent to the highway. Why would someone want to hang out along a dead end ridge walk just a few meters from cars speeding by?
Last edited: Jul 6, 2018
L

Another vote for Rees Ridge. Blocking the stupid Gardener with a park with always get my vote.

ponyboy said:
Why would someone want to hang out along a dead end ridge walk just a few meters from cars speeding by?
Click to expand...

I would want the Gardiner buffered, but hanging out up there all given them a perch with a view over the harbour to the islands. People are drawn to "lookout" spots.

SLOCRO said:
The project "Rees Ridge" was by far the best proposal in my opinion. Here are some images from City Hall (and it captures much of what Torontovibe mentions plus has a design that could potentially be manipulated to include an under Gardiner bridge to the adjacent transformation station or "High Line"):
View attachment 149076 View attachment 149077
Click to expand...

I agree that this is the best one. Hopefully that waterfall includes a flat plaza that can be flooded to allow kids to play in the water.

Lost in the competition is that this is HTO Park North. HTO without H2O?

I second the under Gardiner bridge. I suggested it in public and private meetings about these parks. There's already an elevated berm that comes from Spadina where The Beltway is currently planned to end. That trail is already there and can continue as a bridge under the Gardiner and over Lake Shore Blvd. to the Rees Park which would be a much more fitting terminus for the Beltway.

I went in depth through the Rees Ridge proposal and that waterfall is indeed an interactive feature. The water falls on to a plaza. People can get wet in the water fall, and I'm guessing that a part of the plaza floods with water like Chicago's Crown Fountain. 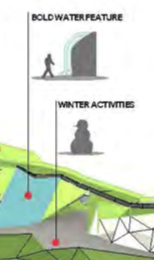 "I feel so refreshed after splashing around in the waterfall!"