allengeorge said:
BTW, you can see this with Metrolinx’s designs for the OL bridges over the Don Valley: they could go for something ambitious, with a sense of place, but no - so far the plan is a concrete guideway.

The issue is at least partially public literacy: people point to the ‘palatial’ TYSSE subway stations as the reason for cost overruns, and even on this forum people have singled out public art (until it was canned, ML’s public art component was 1% or less of total costs) and public realm as contributing to escalating public costs - while the real reason is our overuse of TBM, inability to bank ROWs, political dithering and more.
Click to expand...

Yes like for tysse. If they did elevated but but made beautiful stations, the cost would be much lower, with really unique station design. I dont think it would be such on issue. But they decided to deep bore through industrial and sfh.

Northern Light said:
I don't disagree; but I also want to pitch in for the idea that sometimes the money is on the table and is spent poorly.

I'm thinking of the TYSSE where we over-built, cavernous stations, by commissioned starchitects with lavish budgets, and yet we have sections without wall finishes (notably trackside walls), but even missing sections of ceiling finish.
The cost to get those things right were small, and could have been paid for with the 'public art' budget pretty much, or by modifying the designs to shrink ceilings heights or station depth by even a few feet, or trim capacity by even 5%.
So many different choices were available. Even the starchitects didn't 'own' their work.

Beyond that, however, lets look at bridges, since that's being discussed above.

Parapet walls used to be covered in different surfaces including stone, brick, various spray applications to make them more attractive. At some point here, engineers decried that such surfaces made bridges harder to inspect.

A legitimate concern, but one that could be addressed several ways other than using bare concrete. If it was really desirable to see the surface concrete with the naked eye, one could use cladding (brick/stone etc.) that could be removed for inspection purposes. Alternatively, one can inspect structure w/any number of different diagnostic technologies these days that can easily see through an exterior coating....

Of course, the latter would cost some money....

But I digress; even the engineers have admitted, the concrete walls can be dull, a preferred solution was settled on, that they could be poured into forms, giving the illusion of some other surface. (not sure why, but I haven't seen any experiments with dyed concrete, I think a terra cotta shade could be quite nice).....

Back to poured forms though; we don't consistently use them, we don't apply them in ways that allow fulsome design expression, and we too often use forms that we shouldn't because the design impression is poor.

This is the Gerrard Bridge over the Don River/DVP. Exceedingly bland!

But could we do better?

Here's the Lawrence Avenue East bridge over the GO tracks:

Much nicer! Not stone, just concrete, but poured into a form to make it look like stone. Same railings as the Gerrard bridge, but in black instead of plain/unpainted.

For contrast, this is the refurbed Millwood bridge over the DVP and Don River which also saw forms used for its concrete:

What is that design? Seriously. Also note the unpainted railing which contributes to monochromatic dullness.

Can you tell? LOL..... they only used them on the outside of the bridge to emulate the stone coating that used to appear on the bridge, but not on the top/interior side. Sigh.

Moving on from parapet walls, to the railings above. The designs need not be historical, or black, but having a design just a bit less utilitarian with some sort of good colour chosen does wonders.

This is from the southern extent of the Bathurst Street bridge over the rail corridor:

Clearly the form of the parapet is dull as dishwater, but the railings here have a measure of elegance.

So much can be done for relatively little cost. Often entirely within existing design budgets, for literally an extra 1% Sigh.
Click to expand...

Thats assuming they use a concrete barrier .. Ontario is building bridges now with just a steel barrier : 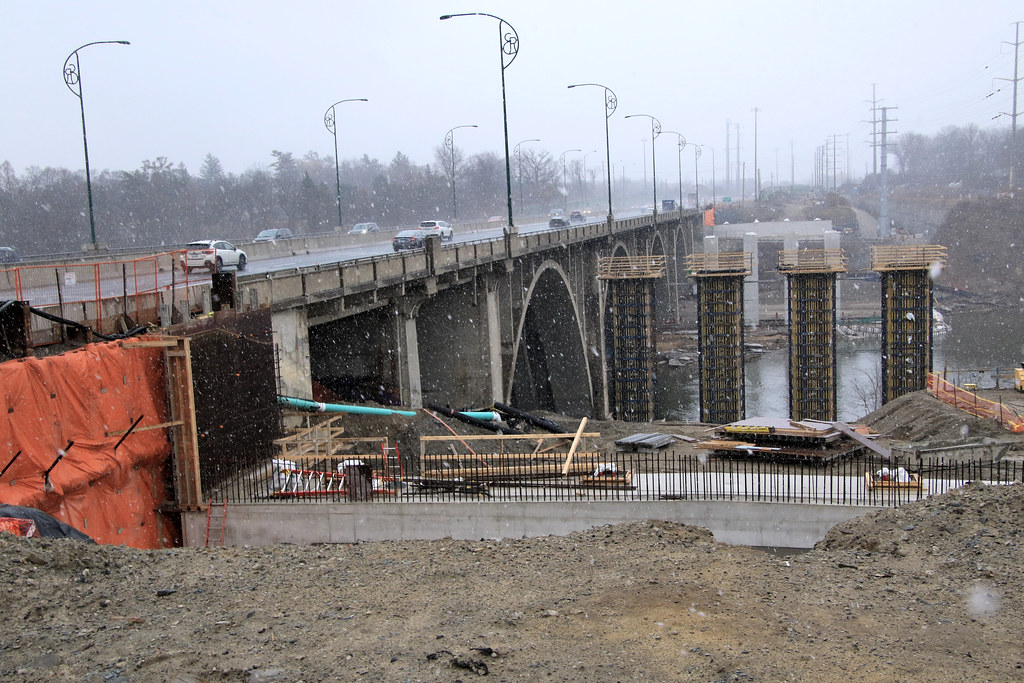 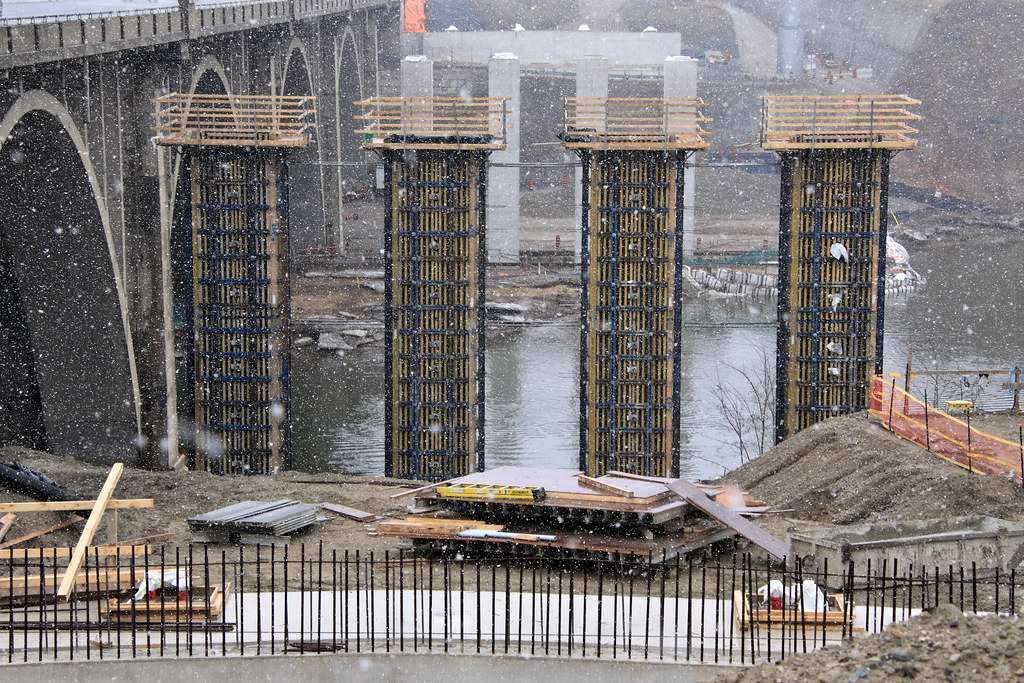 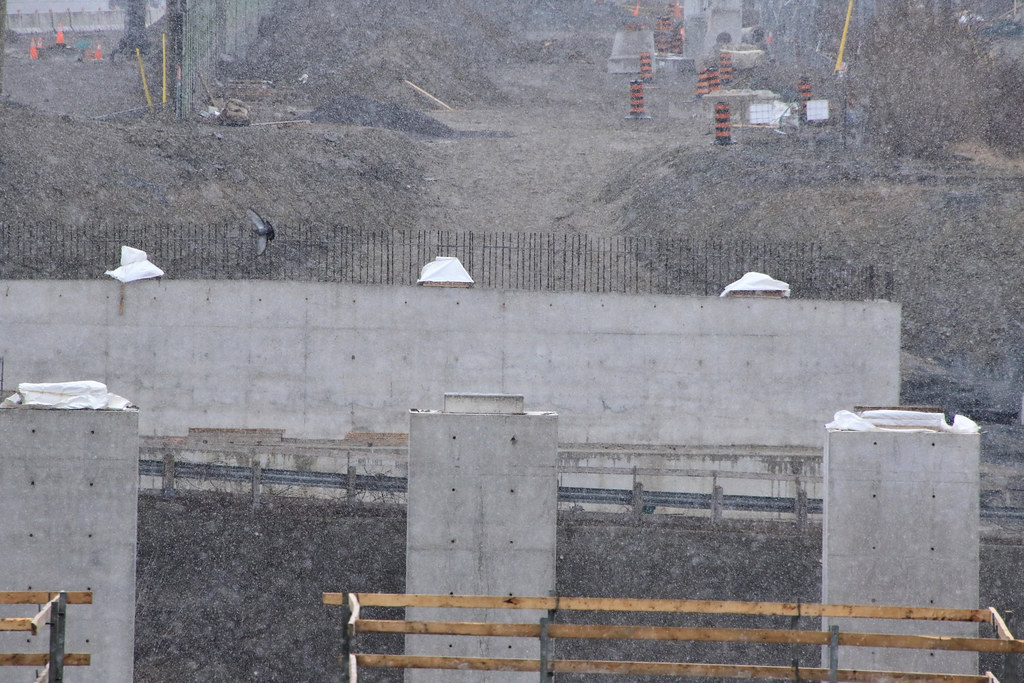 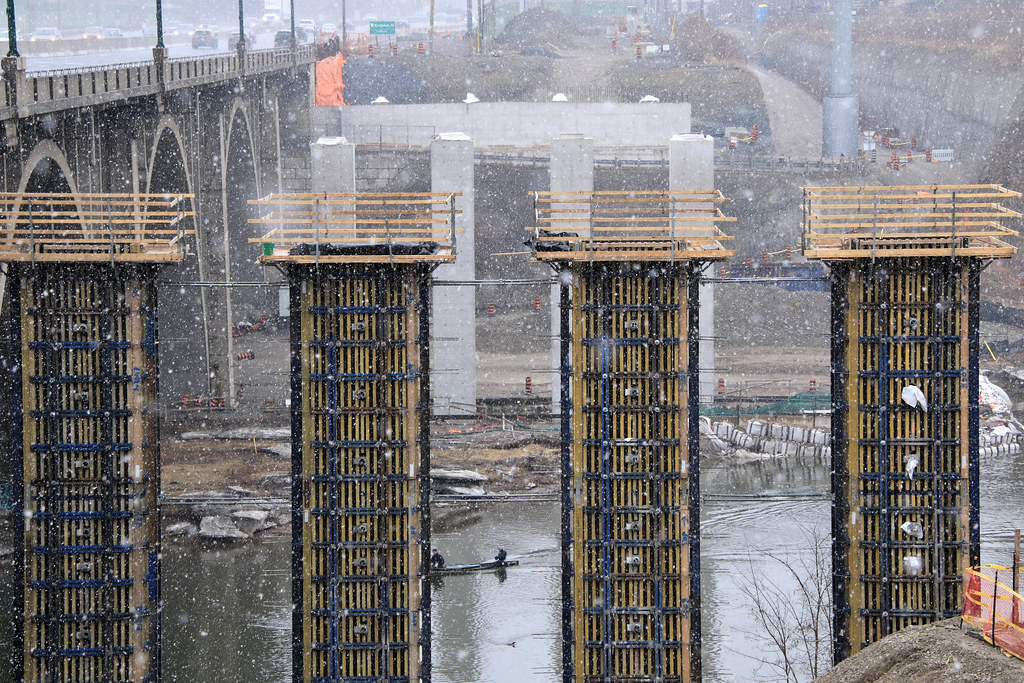 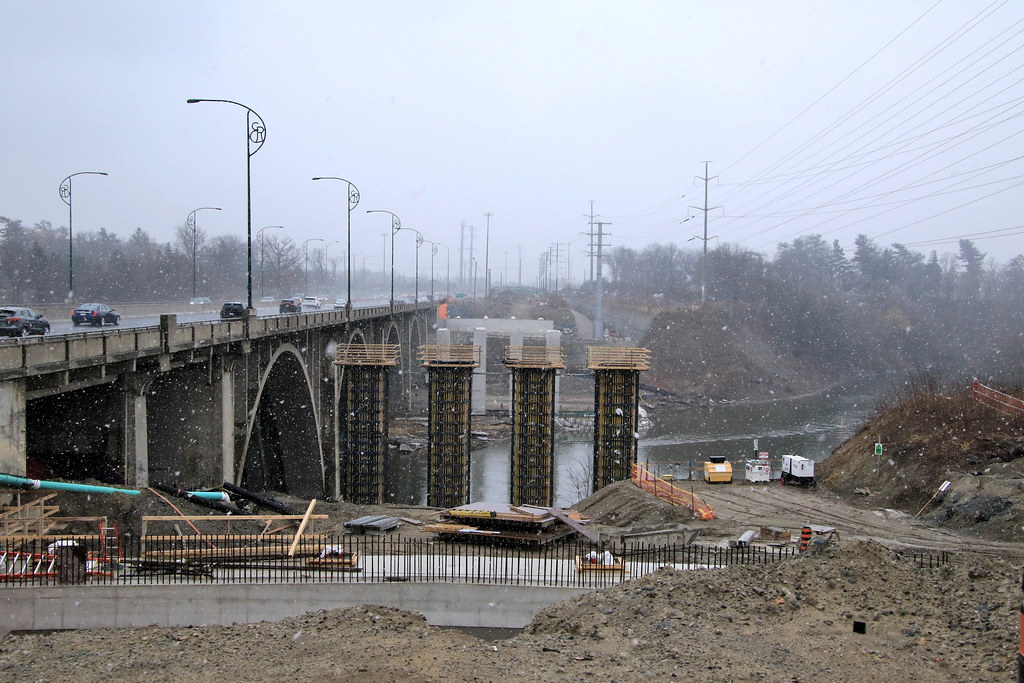 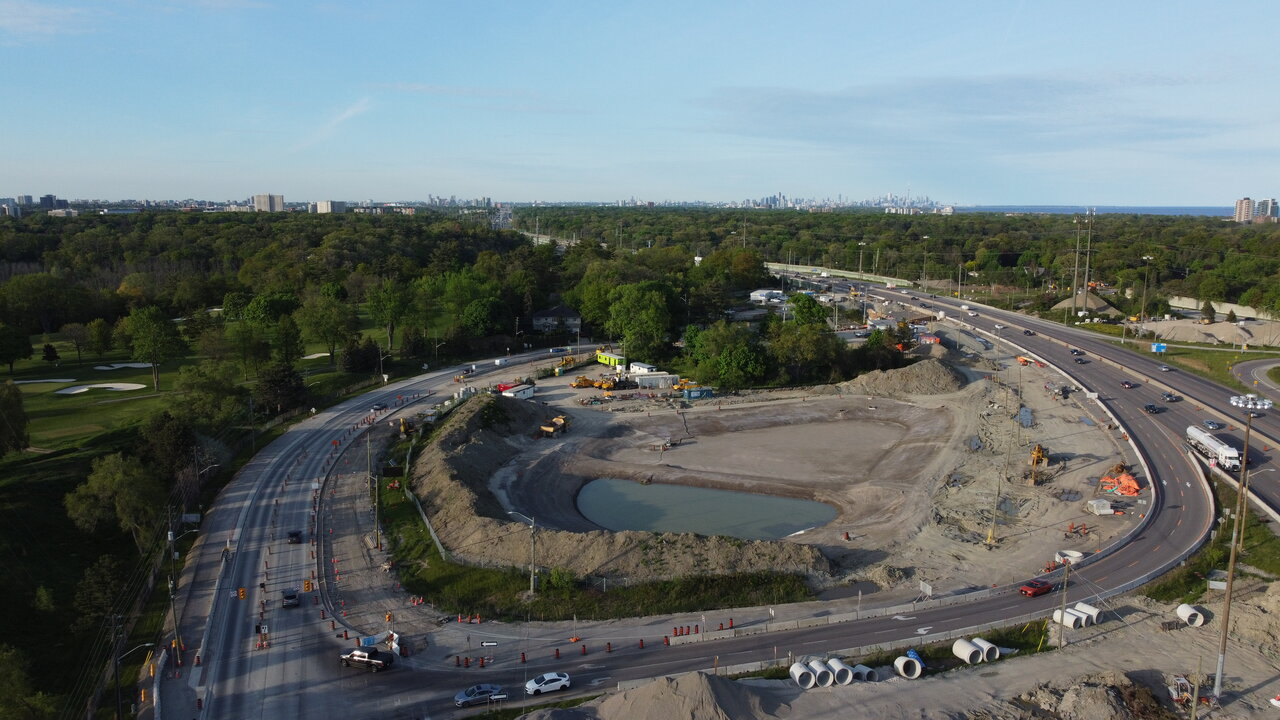 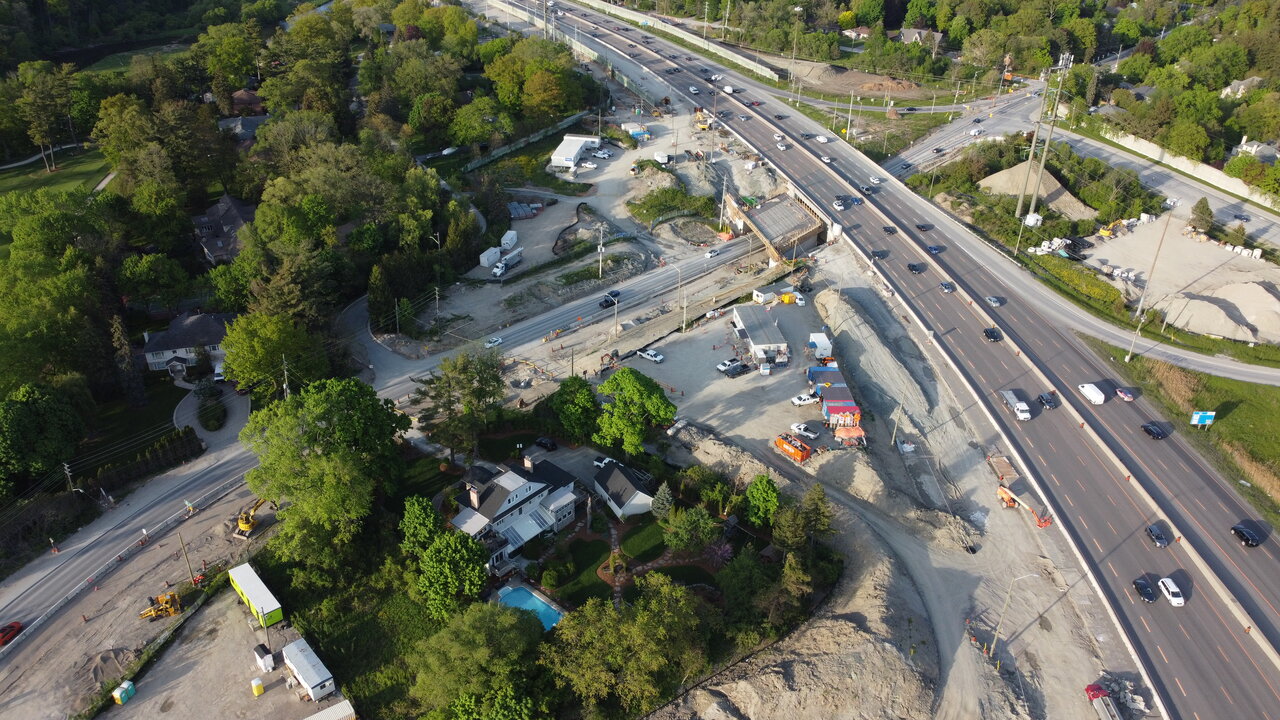 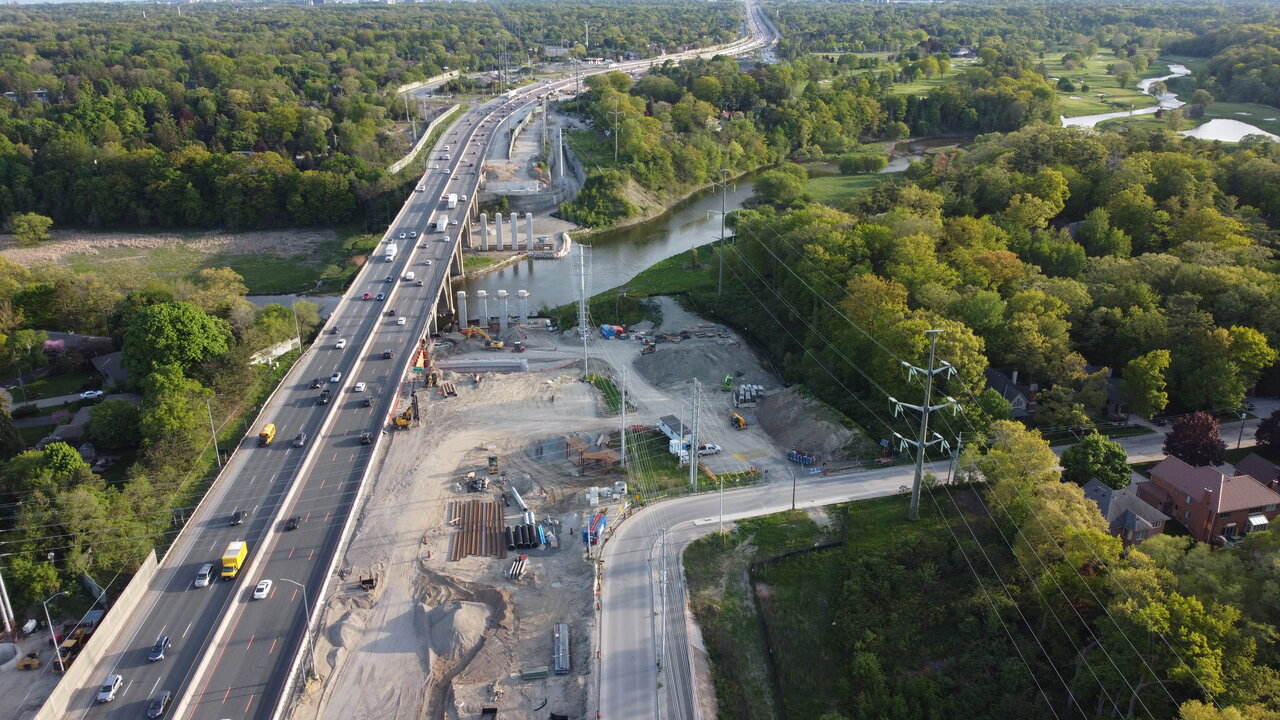 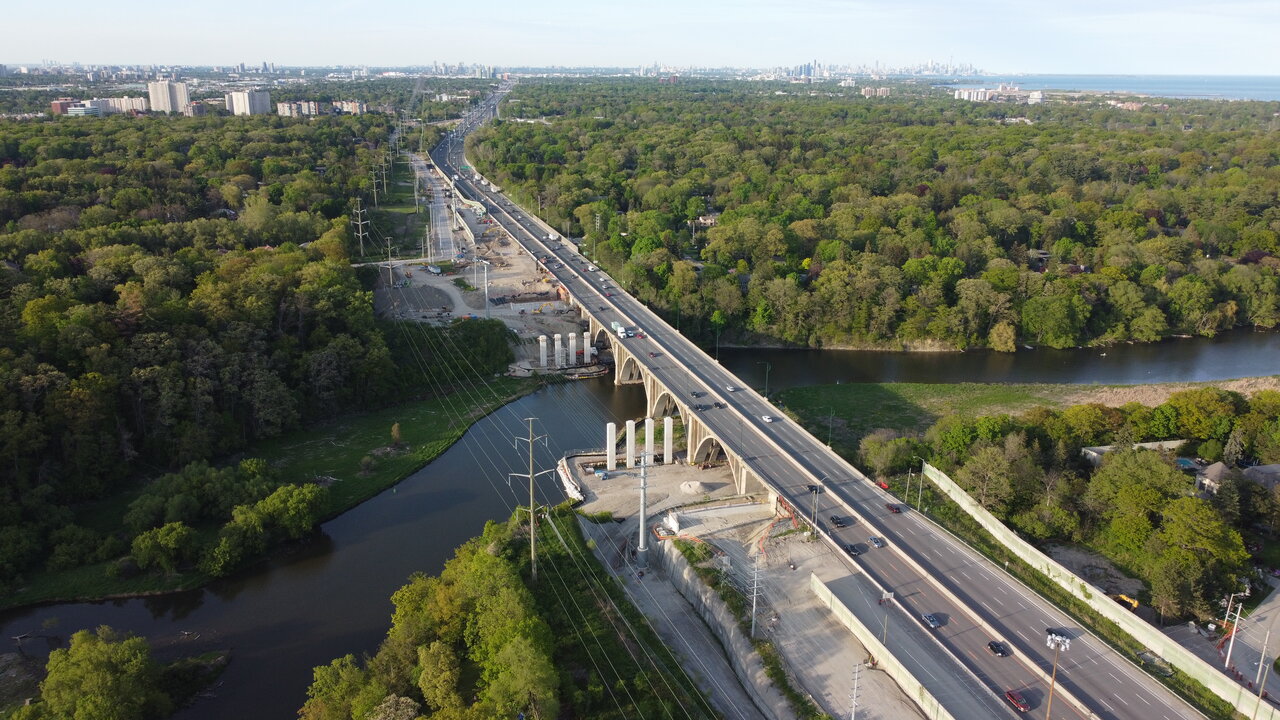 It's too bad they didn't go with a design which matches the original. A plainer second span will detract from the elegance of the original.
D

Junctionist: environmentalists run the show now and piers in the water are to be avoided at all costs. Shame for those spoiled kayakers who will actually get to see the bridge from below.

So I wanted to reshoot the original bridge but the hydro wires make it tricky for me to shoot it from the North Side. Today I was able to find a suitable takeoff location on the south side and even though it was later in the day than I had hoped (was planning on early morning rather that high noon), it still turned out ok i think. 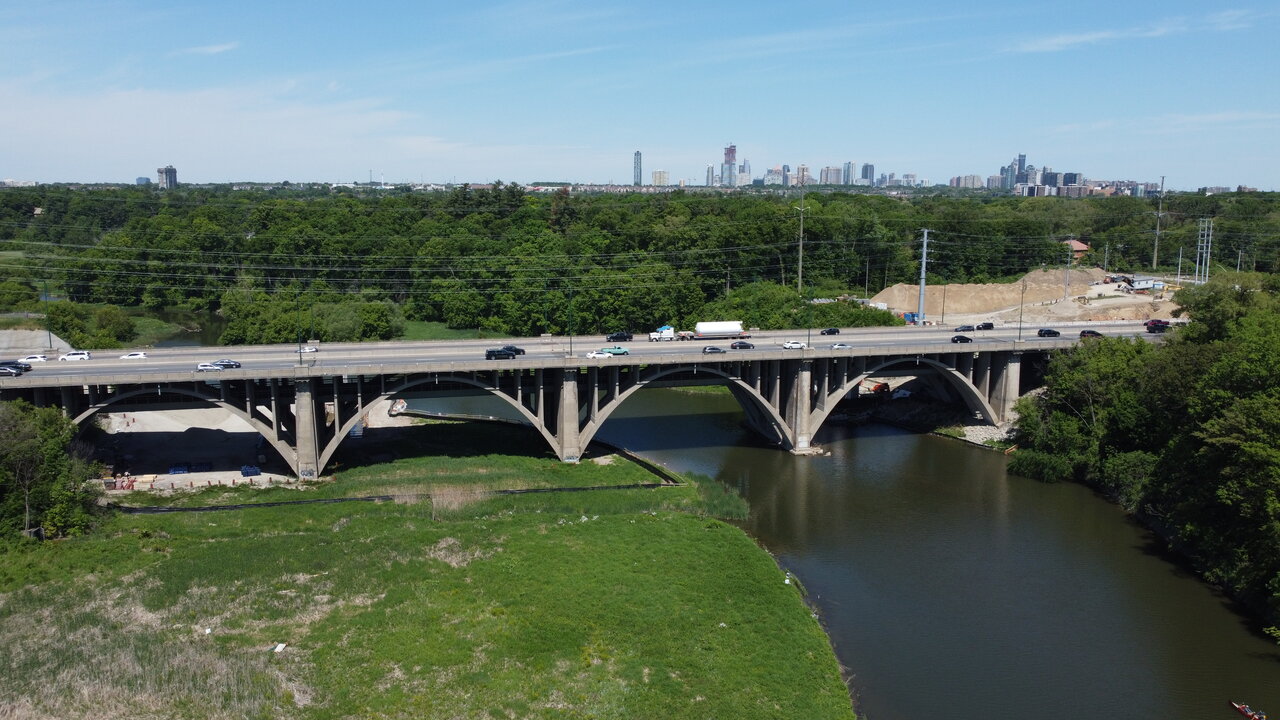 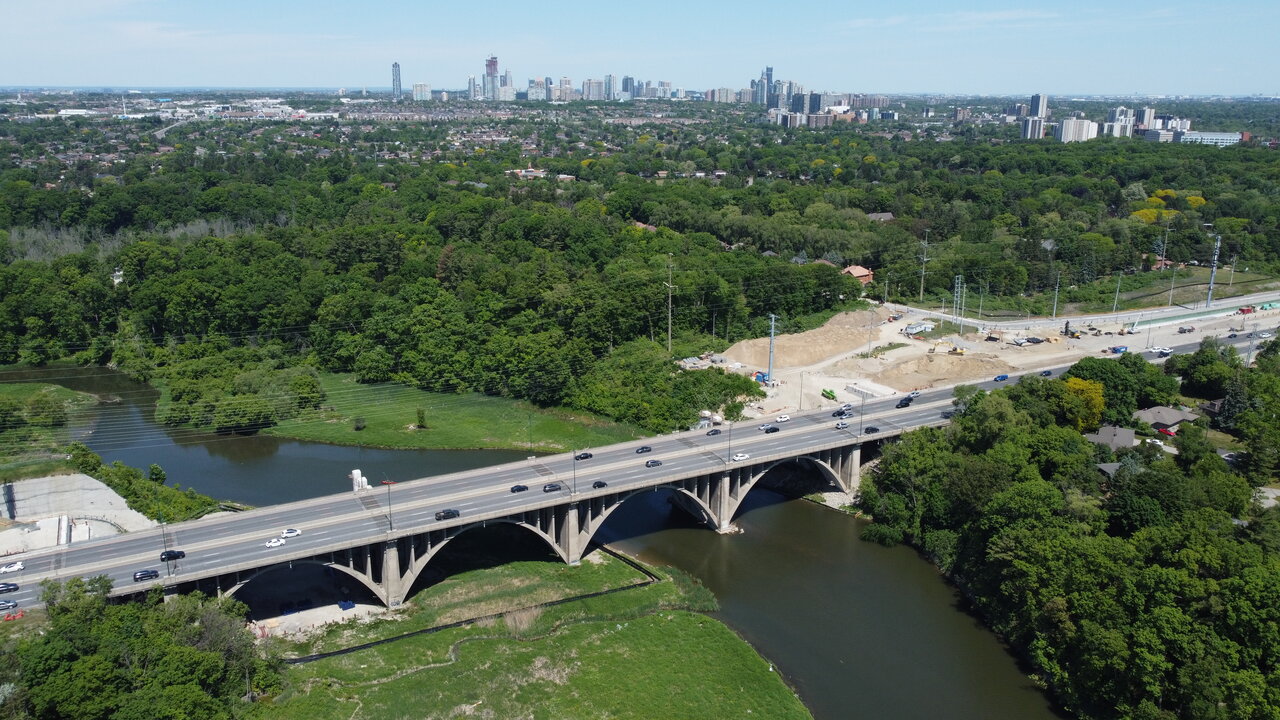 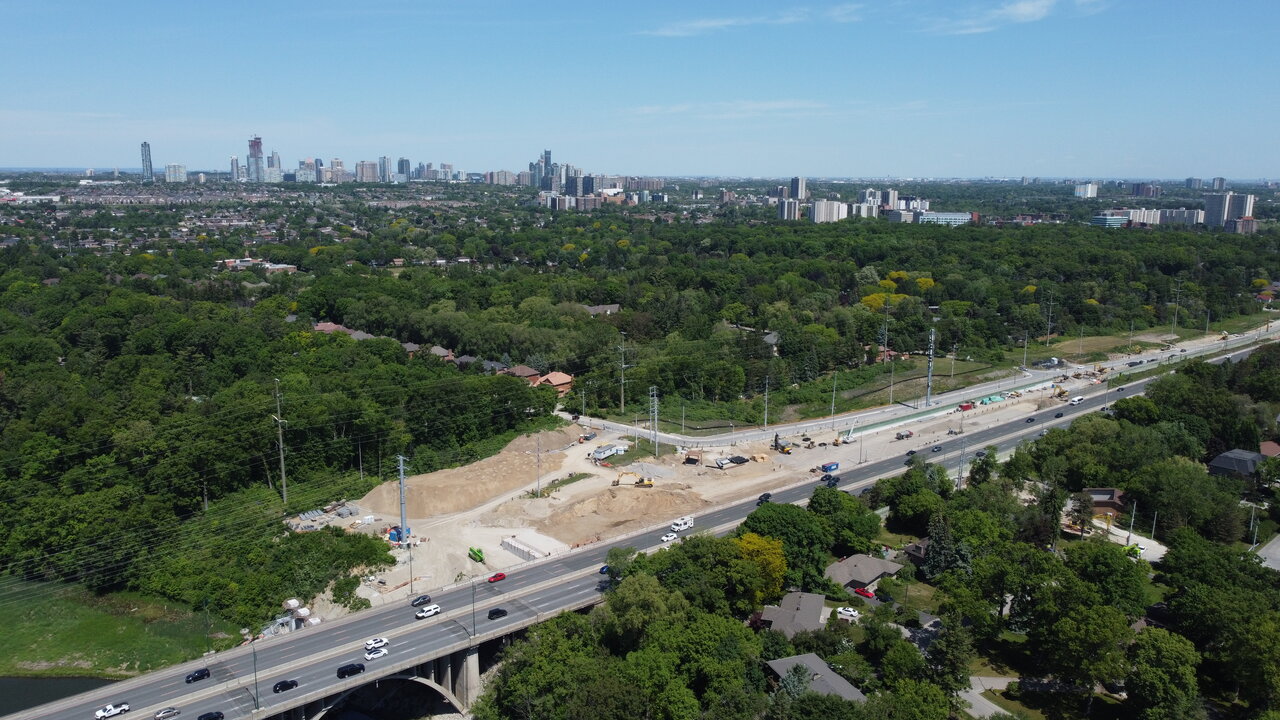 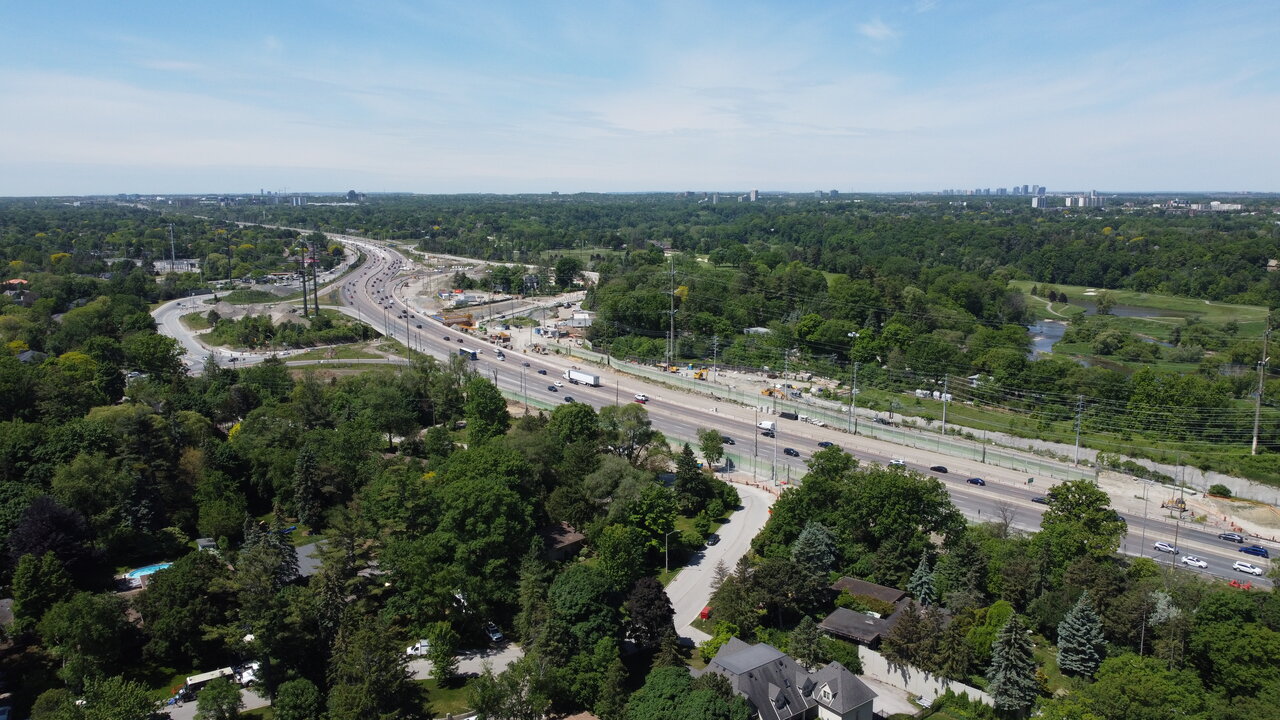 bangkok said:
So I wanted to reshoot the original bridge but the hydro wires make it tricky for me to shoot it from the North Side. Today I was able to find a suitable takeoff location on the south side and even though it was later in the day than I had hoped (was planning on early morning rather that high noon), it still turned out ok i think.

Thanks Amare. I had wanted to photograph that beauty for some time.
My dedicated drone photo thread on UT https://urbantoronto.ca/forum/threa...-tim-macdonald-covid19-induced-boredom.31164/
Check out my Instagram for more aerial photos and videos: www.instagram.com/macdonaldmediatoronto
www.youtube.com/@macdonaldmediatoronto
S

Anyone know the completion date of the project? went through the thread and didn't see it but might have missed it.

Sky High Arch said:
Anyone know the completion date of the project? went through the thread and didn't see it but might have missed it.
Click to expand... 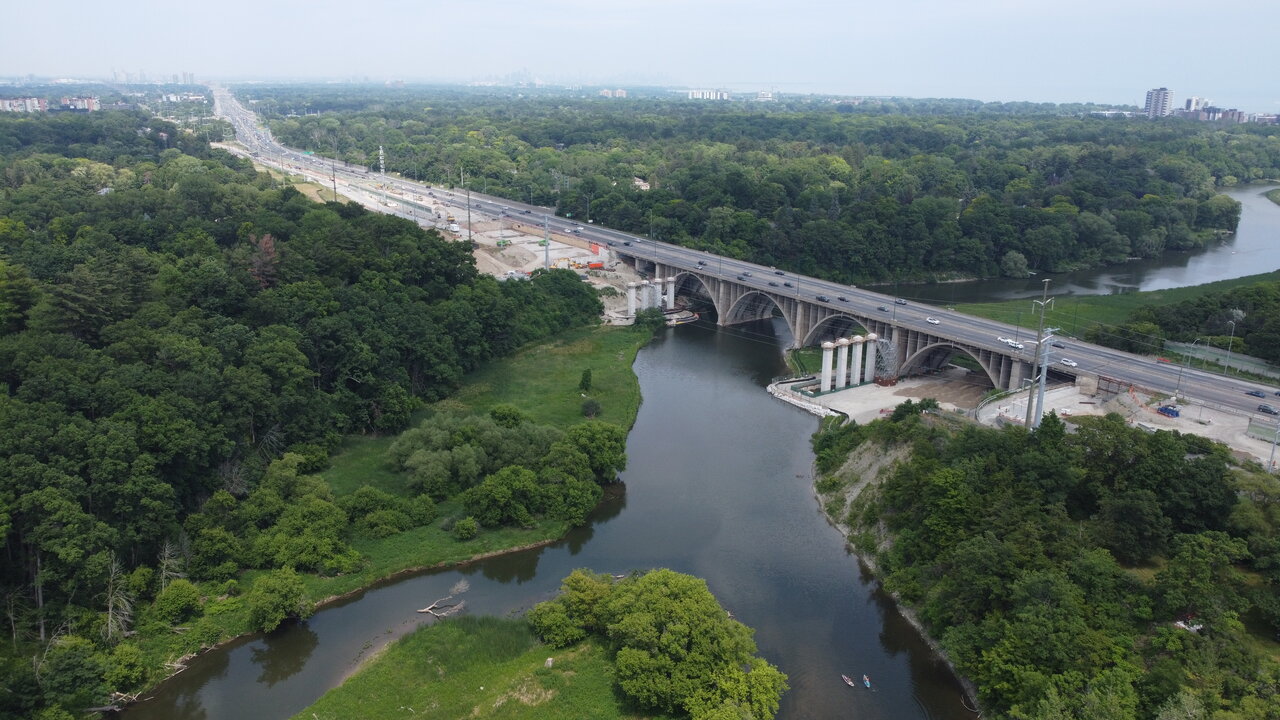 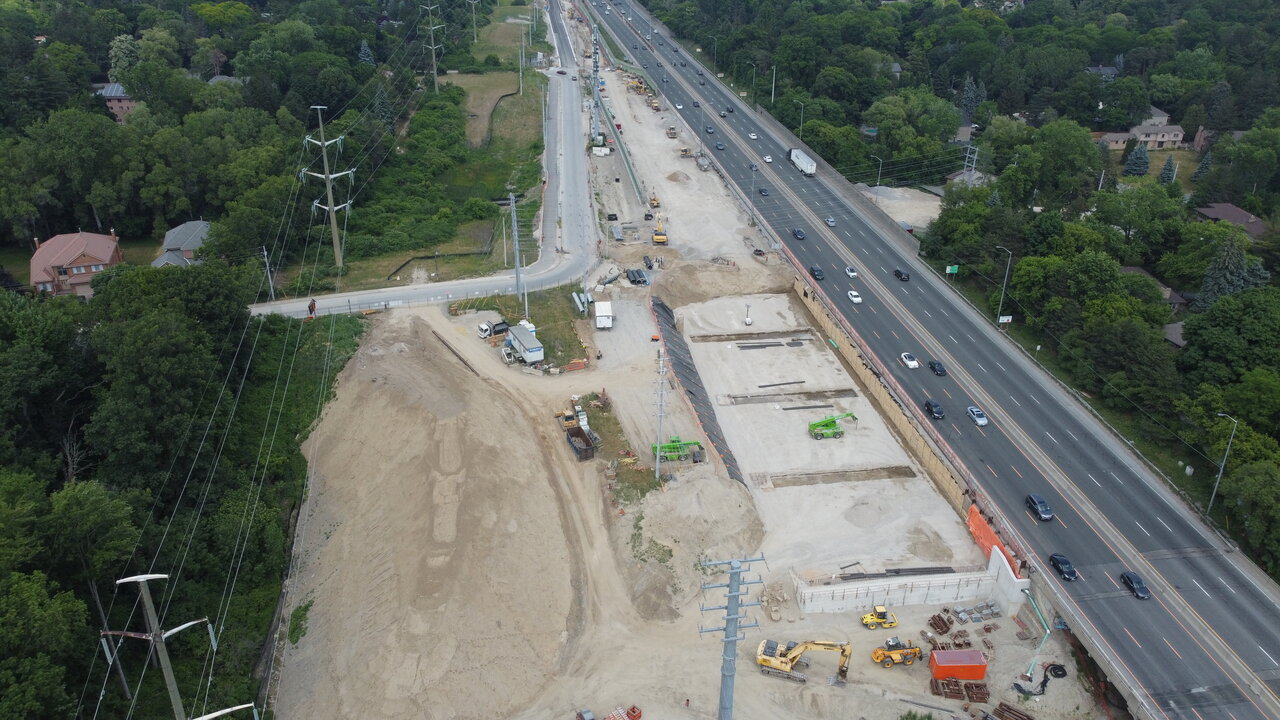 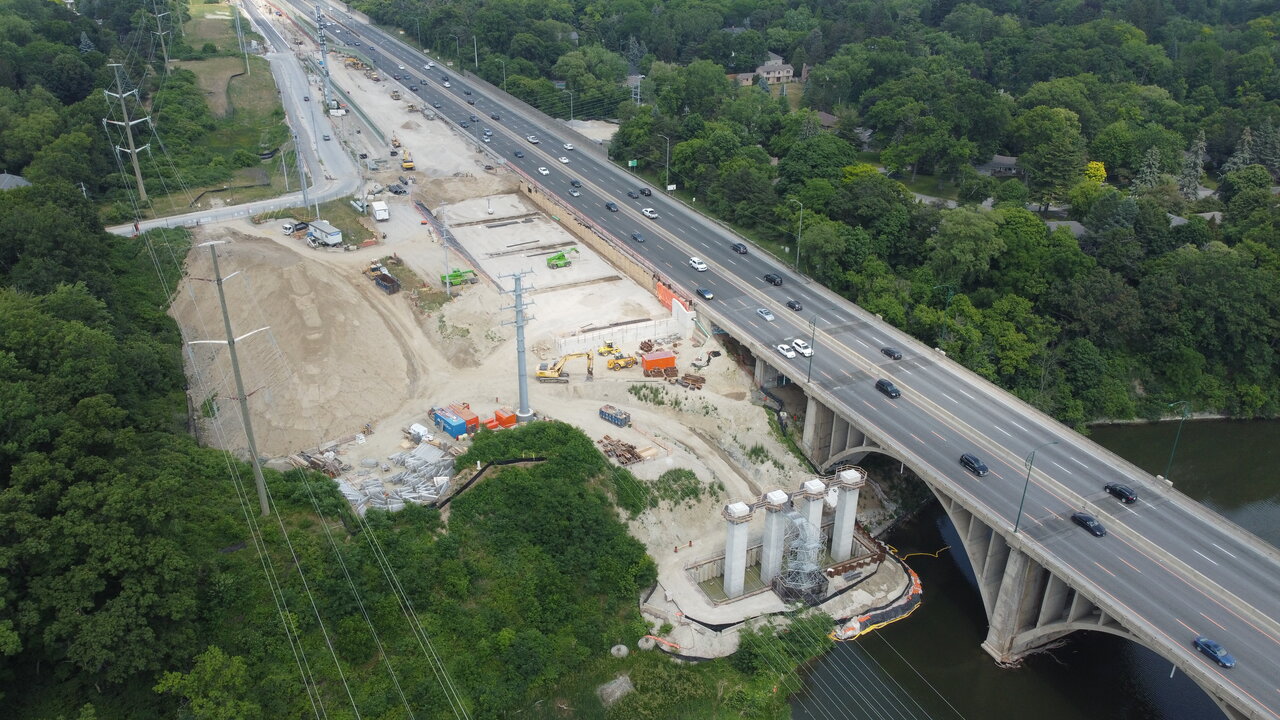 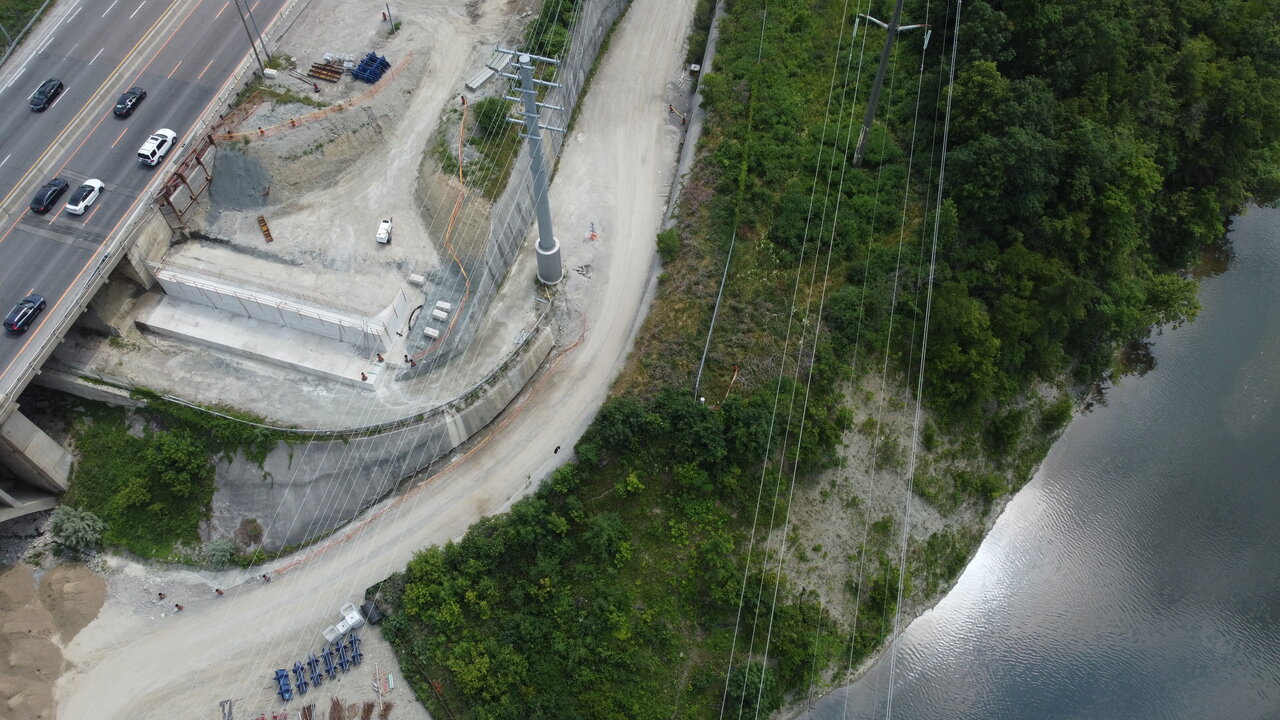 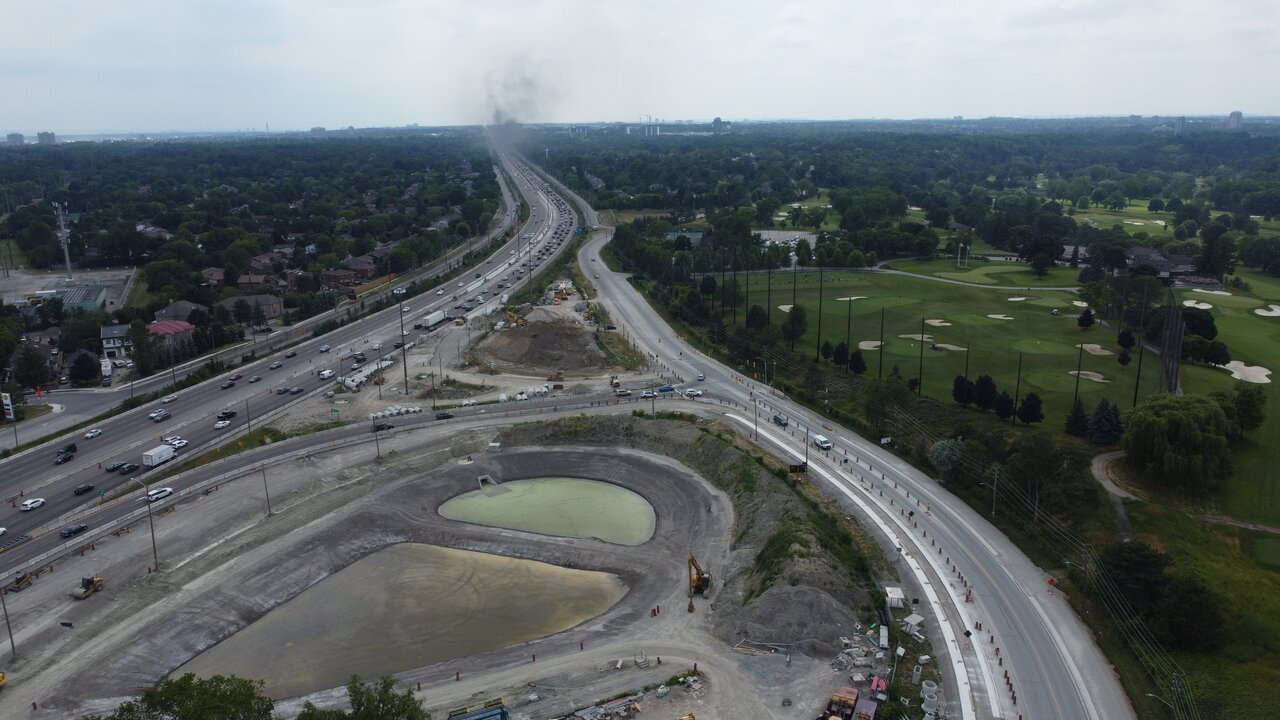 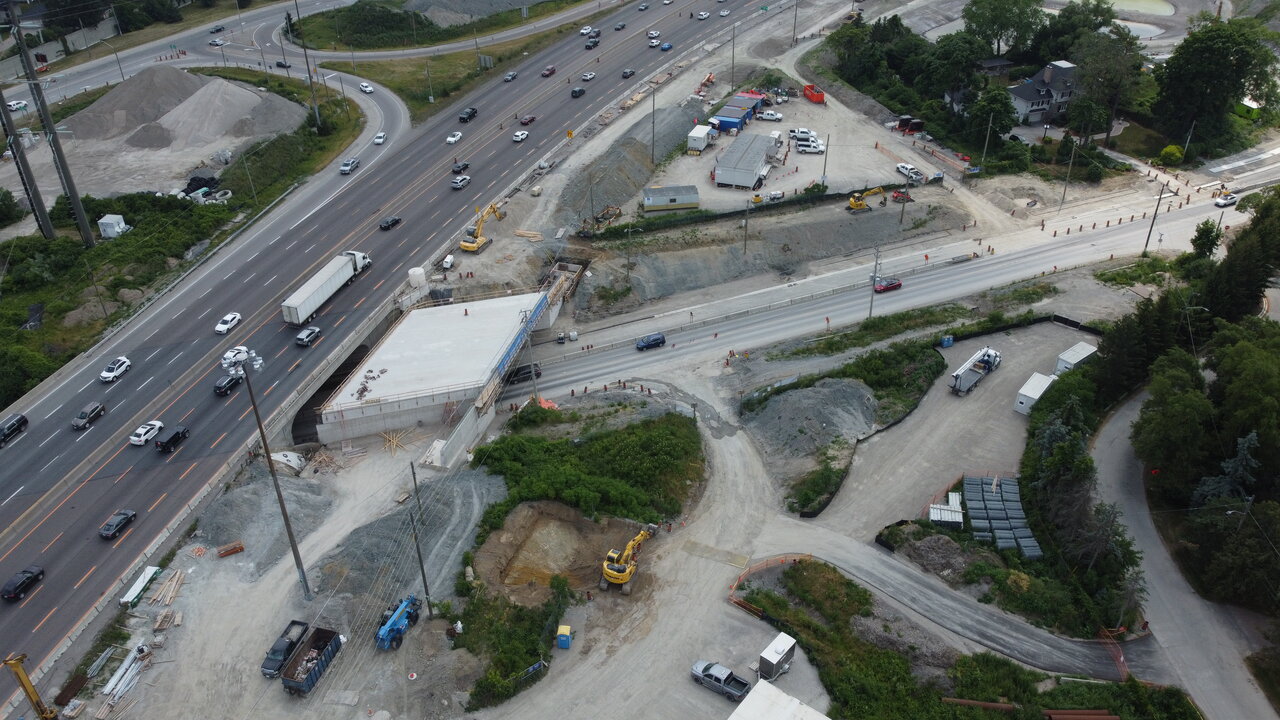 When the QEW is widened, will one of the service roads be permanently closed? Can't see it being otherwise.
M

Transportfan said:
When the QEW is widened, will one of the service roads be permanently closed? Can't see it being otherwise.
Click to expand...

Perhaps in areas where local property access is not needed and space is constrained they could close them. However, any property that fronts on to one of those service roads will necessitate it's retention. Perhaps they will have to expropriate front yards and parking lots in such cases to widen the QEW and retain the road. If no option can be found to accommodate access then I expect the province would purchase the property so access would no longer be needed.
You must log in or register to post here.
Share:
Facebook Twitter Reddit Pinterest Tumblr WhatsApp Email Share Link