But it's not just the retail partners of the LCBO and Shoppers. Of course, residential developers collaborate all the time with retail holding companies but, you're probably looking at a 6 to 8 storey building with 60+ units to peak their interest. How many apartment units can this city absorb at one time? The alternative to these LCBOs or SDMs is closer to a weed lot or buildings left to rot. Which is better? These "shells" can be readily knocked down at any time.
got some ice to sell you 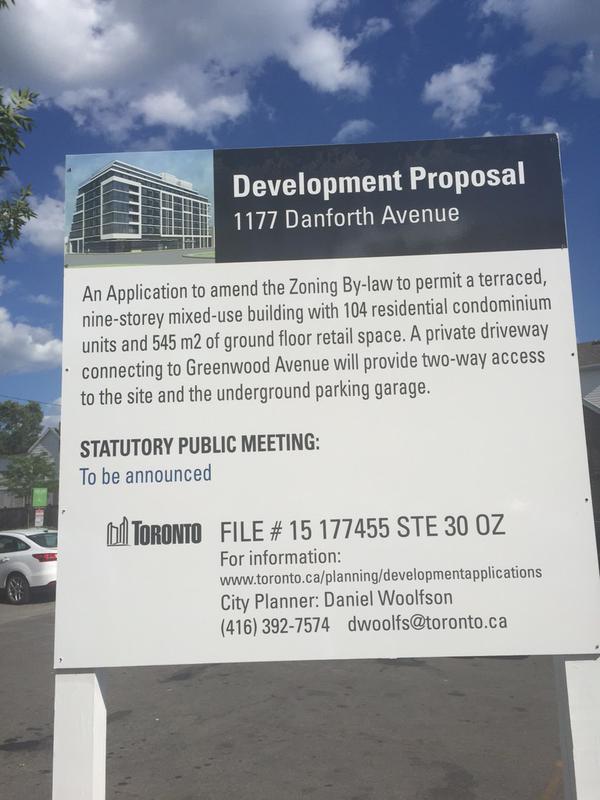 Blech -- that looks way out of keeping with the neighbourhood, and blandblandbland.

Does kind of look very corporate-like. But I'm happy to see more density going into the Danforth. I thought they missed a great opportunity when Esso developed the opposite corner. The old Allenby marquee would have looked great as the entrance to a deco inspired new condo development. Instead we got the On-the-Run and a Timmies.

Agreed - it looks sterile and cold, more suited to anonymous office space in a suburban industrial park. Happy that the area will have more residents and that will help hasten development of greater vitality along that stretch of the Danforth - but man, that design feels really cold and off.

Community meeting planned for this autumn.

The Beer Store at Danforth and Greenwood could be replaced by a low-rise condominium tower.

But east-end tipplers worried they’ll lose a place to buy beer and return empty wine bottles if and when the eight-storey condominium development goes up on the south-west corner of Danforth and Greenwood Avenues, may not actuall lose their Beer Store outlet despite the condo project.

“We’ve actually invited the Beer Store to come back into the building after the building is built, so most of the residents can have their cake and eat it to,” said Morris Kansun, head of the Sierra Building Group.

Kansun was at Toronto City Hall on Jan. 14, after having submitted an application to redevelop the site as an eight-storey condominium with a rooftop garden. The proposal envisions a 112-unit development with retail at street level and units ranging in size from 500 square foot bachelor apartments to 1,500 square foot family-sized units with two bedrooms and a den.

Ward 30 Toronto-Danforth Councillor Paula Fletcher said the scale of the building seems to make sense. “They’ve not come in with a 15 or 16 storey building, so I respect them for trying to work within the guidelines,” she said. “It’s a signature corner, not as busy a corner as other ones.”

Kansun said he believes the Danforth is ripe for condominium development.

“You know, I find the Danforth an enigmatic sort of street,” he said. “I’m amazed that we are the first condo on the Danforth. Here we are at one of the major arteries in Toronto and we don’t have a condominium. I don’t know why, I don’t get it, but I’m going to be the one.”

Kansun said he hoped to have approvals finished within the next few months and a sales office open by summer. He wouldn’t speculate on the price of the units.
Click to expand...

"I’m amazed that we are the first condo on the Danforth. Here we are at one of the major arteries in Toronto and we don’t have a condominium."

Guess he didn't go further down the Danforth to Woodbine.

Is this proposed development worthy of adding to the map yet?? Not sure what the criteria are.

YDS said:
Is this proposed development worthy of adding to the map yet?? Not sure what the criteria are.
Click to expand...

The community meeting was last night