I believe there is also a plan to build another bridge just east of the GO Station to connect the north side development with the south.

A branch of the Pulse 900 also currently detours to terminate at the Pickering Parkway Terminal, serving City Hall and the south side of the mall.

I think there is also a plan to link squires beach to notion rd for the casino id assume.

Poor square one. Got to take a lrt to get to the go train.
I

toast_and_tea said:
Anyone else remember when this used to be the Sheridan Mall?
Click to expand...

Yep...and most of what was east of it (town hall, rec centre, apartments...etc) was the Bay Ridges Drive In. 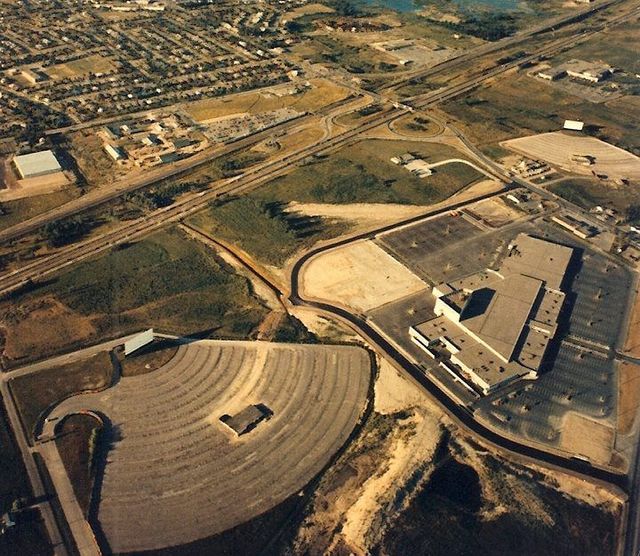 You can also see the Teepee Drive In to the west across Liverpool on the site of the Super Centre.
D

so a few things, ya that 401 crossing is in fact for the durham live casino. found a note in the city budget for purchasing the land for it. construction might start soon on that.
as for the city centre. What Pickering is doing is relocating or building new:
- seniors center
- library
- preforming arts centre/theatre
in the town center redevelopment by OPB realty

Architechts alliance was brought on as an architect for the city stuff.
in listed in the fsr plan on page 40 https://www.pickering.ca/en/city-ha...NGSTON-ROAD---Functional-Servicing-Report.pdf 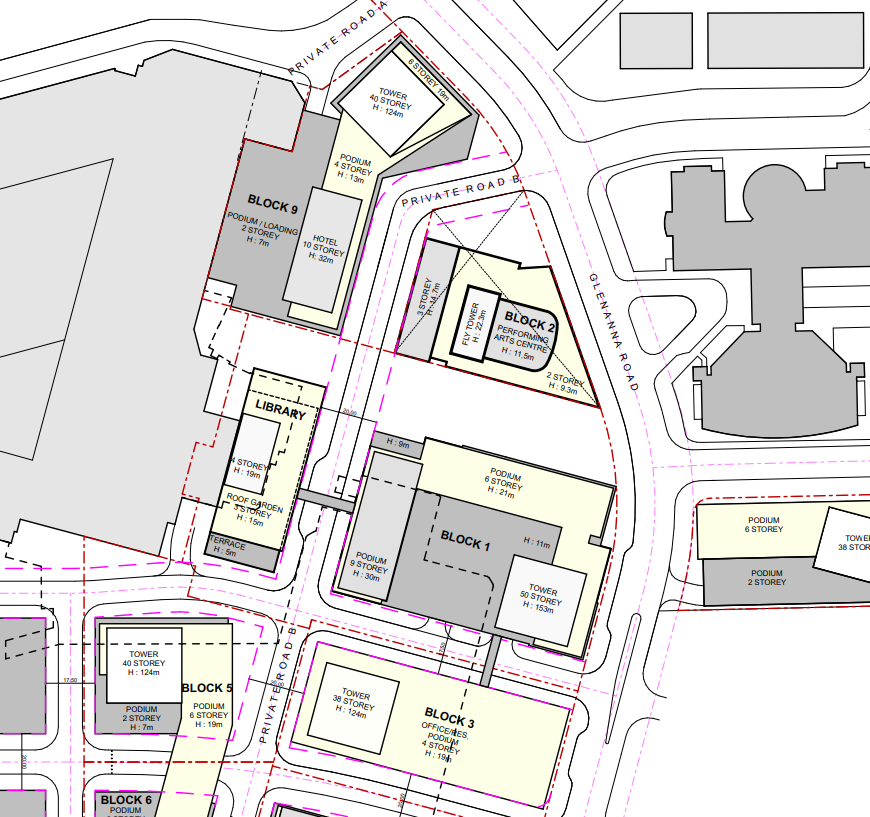 As balcony sculpting goes, this design from the concept renderings really catches my eye: 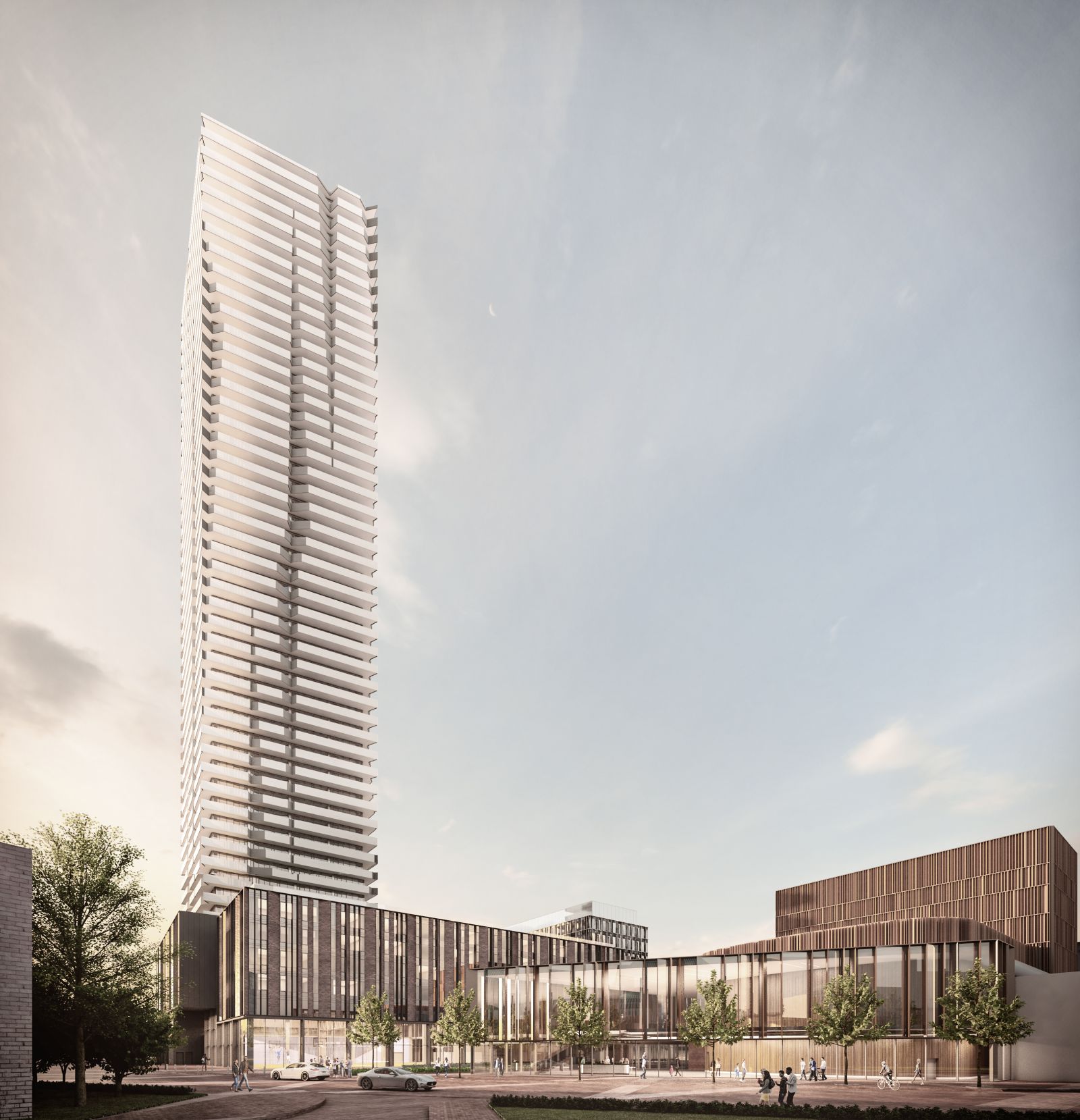 Now that is nicely incised!

An update, but not much information explaining the change in phasing, reduction (I think) in commercial/retail, and the scrapping of the performing arts centre, and I think Y/S Centre and Library. Nonetheless, if they’re still in the program the Architecture has changed dramatically since the glossy renders were presented to the City at the beginning of the year. 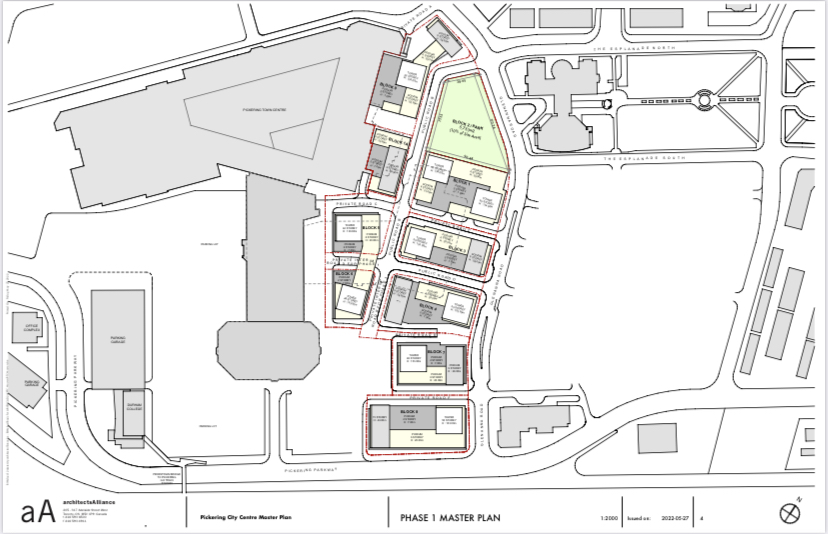 (These screenshots aren’t clear enough to see the details, I apologize, but you can access the new docs here)

Also missing is the pedestrian promenade that acted as an extension of the Esplanade South and was meant to host the farmers market and other community events. In its place is a large “lawn” in the final phase of the project that the City’s calling an “open space system connecting all of the buildings and uses including City Hall.” To me, though, it looks like an afterthought. 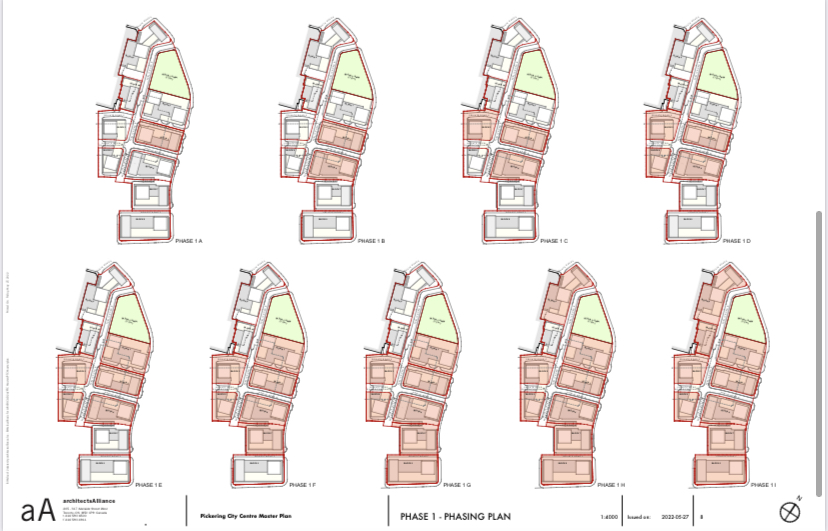 An extra tower has been added, the heights slightly increased for the rest — give or take five storeys, a new 9 storey mass Block 1A (what was the Library), and a new configuration of Block 9.

The development on the Esplanade South hasn’t been included in the revised plans.

The most disappointing part of the plans IMO are that there are only 2878 sq.m of commercial space split between two buildings — Both of which are in the final 2 phases. That’s a lot of people moving into a walkable “City Centre” not to include even *some* retail in the earlier phases; especially since they’ve made provisions to include a few interim surface parking lots squeezed between phases found here on page 66 of the Functional Servicing report from the original supporting documents.

But it’s not all bad. There’s another amendment to reduce the residential parking minimum ratio.
G

At the Special In-Camera Council Meeting of March 11, 2022, Pickering Council received a significant update related to the long-term fiscal and economic impacts of the City Centre project and has decided to defer all work on the project pending further Council direction.

In light of the Council’s decision to defer the City facilities, OPB Realty Inc. has submitted a revised Draft Plan of Subdivision to proposing nine development blocks, one parkland block and a network of new internal public and private roads that will provide access to Glenanna Road. The most significant change to the proposed draft plan of subdivision is the enlargement of the public park.

on a better note

Nothing says "urban" like a sterile, flat lawn. That, combined with the scrapping of the performance arts centre, is disappointing but not unexpected.

I find it very unexpected given the architects had detailed designs for those community spaces including floor/wall/ceiling finishes, millwork, furniture and fixtures. Plus, in their last meeting public meeting with the City they name dropped some of their suppliers for the furnishings.

The least flushed out design at that point was the library, which still looked incredibly detailed for a Zoning By-law Amendment application. They also had the library Committee speak to how much time they spent with the architects organizing how they’d best use the new space.

So, everything looked promising and I thought there was a no going back. I expected we would probably see some value engineering on the future residential phases, but now that that is all there is going to be, I am very VERY worried.

Some news (or not) on this one. Lots of recommendations coming, as expected since they changed plans. 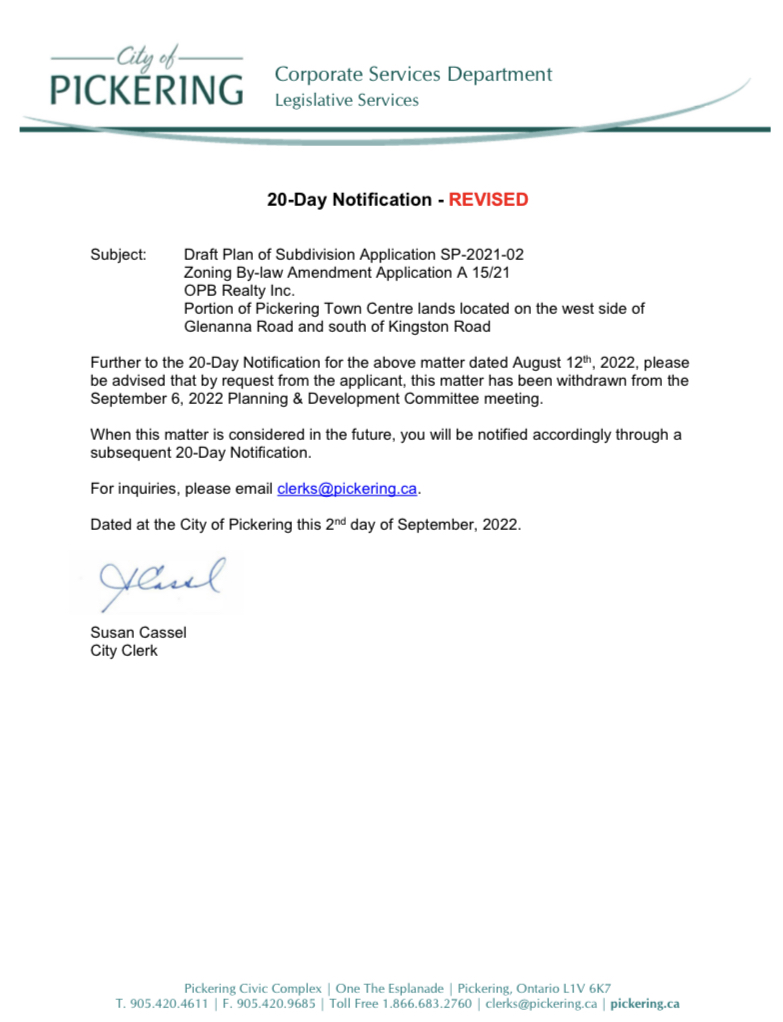