Another expansion announced by Ivanhoe Cambridge, but maybe, it's not as high profile a mall as Vaughan Mills:

It's a $230M investment, which is almost triple Vaughan Mills, and closer to Sherway's.

The additional space will allow the centre to introduce over 60 highly-desirable retailers into the Durham regional market. Construction will begin in summer 2013 and is slated for completion in spring 2016.

Over 60 new retail concepts, including two additional large format retailers
New 1,000-seat, sophisticated food court
New main entrances on the east side
New and updated entrances on the west side
Upgraded seating area elements, including floor and ceiling treatment
Fully renovated washrooms with modern upgraded finishes
"This expansion and renovation reaffirms our confidence in the Oshawa community and the Durham region, today and in the future. Today's announcement is not only great regional economic news but also reinforces our dominant position in the fastest growing community in the GTA," added Bill Thompson, General Manager, Oshawa Centre.

"Oshawa Centre has been a part of the Oshawa community for close to six decades," said Oshawa Mayor John Henry. "A renovation and expansion project of this size will create numerous construction and retail jobs right here in our city."
Follow me on Twitter! @samyyz
S

OSHAWA -- A $230-million renovation is in the works at the Oshawa Centre, and local shoppers can expect big changes over the next three years.
On Wednesday, officials from Ivanhoe Cambridge, the company that owns the mall, announced a redevelopment which will add 60 new stores.

Once complete, the new Oshawa Centre will be Ivanhoe Cambridge's largest mall in Canada -- larger than its Vaughan Mills and Fairview Mall properties -- at 116,000 square metres or 1.25-million square feet in gross leasable area. To put that size in perspective, in comparison the retail space in the Toronto Eaton Centre amounts to 1.72-million square feet.

Construction is expected to begin this summer, with completion scheduled for the spring of 2016.

"Oshawa Centre for years has been dominant in the region; it's the main fashion mall in Durham Region," said David Baffa, vice-president of retail development central region for Ivanhoe Cambridge. "We've had a high demand from retailers who want into the centre, but we've been unable to accommodate them in its present design."

Among the new stores will be two large-format retailers which will about 15,000 to 20,000 square feet, smaller than a full department store, about the same size of the H and M. Mr. Baffa said he couldn't list specific new stores coming to the mall until deals are finalized. He did confirm there are no plans for a new movie theatre.

A common hallway will be shaped like an oval track connecting the existing section of the mall to the new one. The food court will be moved to the new section and will have seating for 1,000.

To provide sufficient parking spaces, an underground parking garage will be built under the new section of the mall.

"The existing mall will be renovated," said Mr. Baffa. "At this point we're looking at tile finishes, lighting, painting, signage, furniture as well as entry features. She's going to be beautiful."

With respect to the construction, the plan is to use careful traffic management to accommodate shoppers, said Mr. Baffa.

The project is expected to be a significant economic generator with 1,000 construction jobs for the renovation and 1,000 full- and part-time positions once the new stores open.

"At a time when we're looking at unemployment levels in excess of nine per cent, that's very positive news for the city," said Cindy Symons-Milroy, director of economic development for the City of Oshawa.

The City has not yet issued building permits, but the process is underway and Ms. Symons-Milroy said with a $230-million price tag, it's one of the largest projects ever in Oshawa.

"I think the addition of 60 new stores to the mix will make the Oshawa Centre and Oshawa truly a destination not just from the region, but surrounding regions where people will want to come here and shop and spend their money in our community," she said, adding that with the recent addition of Costco and the upgraded mall she expects Oshawa to be a big shopping draw.

Some Durham residents have expressed concerns that the additional stores in the mall will have a negative impact on Oshawa's downtown but Ms. Symons-Milroy doesn't expect that to be the case.

A representative of Downtown BIA did not return calls for comment by press time.

As for people hoping for a particular store in the new mall, Mr. Baffa said his company is "absolutely" open to suggestions. Shoppers can contact the Oshawa Centre through its Facebook page or its website at www.oshawacentre.com

Thank. The. Lord. I guess the 50's food court is going too
C

Since the Oshawa Centre is near the Oshawa/Whitby border, it would not make sense to open a movie theatre there because it would go against Empire Theatres Whitby which is a 24 screener.
D

An Apple Store would be a fantastic addition to Oshawa. As for a movie theater, there was one, but it closed down years ago. I guess it was busy, but it was just not a well maintained theater.

devjohnson said:
An Apple Store would be a fantastic addition to Oshawa. As for a movie theater, there was one, but it closed down years ago. I guess it was busy, but it was just not a well maintained theater.
Click to expand...

According to the article, there are no plans for a movie theatre. Also, this helps explain why the Zellers there did not end up as a Target--it will be torn down as part of the reno.

FAC33 said:
According to the article, there are no plans for a movie theatre. Also, this helps explain why the Zellers there did not end up as a Target--it will be torn down as part of the reno.

I wouldn't be surprised to see Hollister/Aritzia/Forever 21, but I'm expecting the mall is going to try to attract some of the names that are only in places like Yorkdale, Eaton Centre, or Sherway now--places like Crate and Barrel, Ann Taylor, or J. Crew. I bet H&M expands, and I wouldn't be surprised to see Zara. And the Apple store is probably a decent bet.
Click to expand...

I am pretty sure it was not a case of them not wanting Target because they were planning to reno......if Target had taken that Zellers store there would have been a way for them to absorb that into their reno plans. It was more likely a case of "Target don't want our Zellers store.....what can we do now with the space to improve the centre". In their pre-plans they would have had two scenarios....with and without Target.
D

That underground garage isn't very large and a lot of it is for loading. And doesn't connect to the existing one either.

I found a store directory brochure of the OC from the 80's. Interesting to see all the old stores like Marks and Spencers, Eatons, Bi-way, A&A records etc. 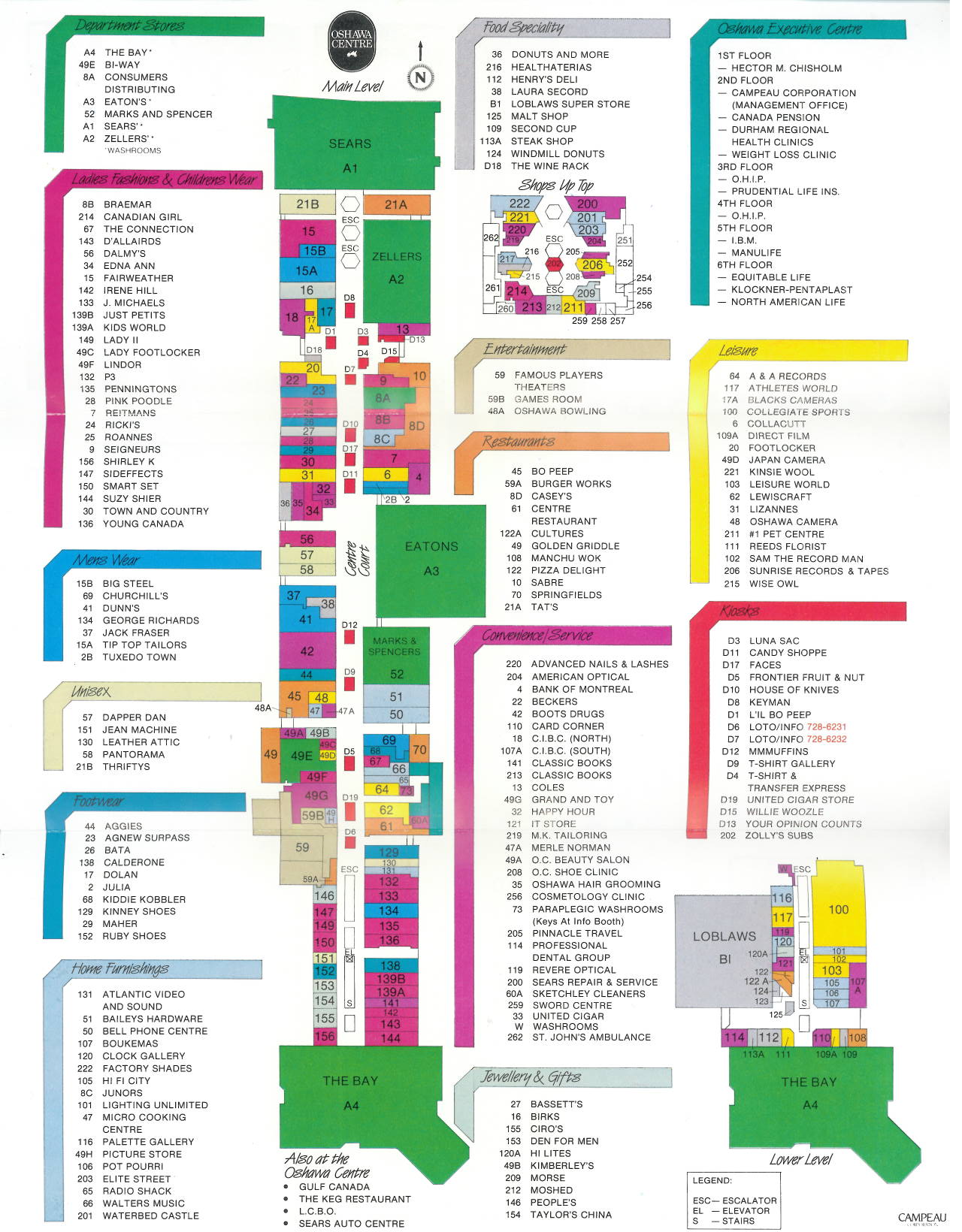 Fritter said:
I found a store directory brochure of the OC from the 80's. Interesting to see all the old stores like Marks and Spencers, Eatons, Bi-way, A&A records etc.
Click to expand...

Cool. A few things about this. Remember Robert Campeau? He owned a lot of malls and mostly named "Something Centre". So many stores listed on here that do not exist anymore. Where the Zellers is was a Kresgie's before it was Zellers. At this time it still retained it's old outside feel. This mall started as an outdoor mall and the oldest part is the Sears end.

Fritter said:
I found a store directory brochure of the OC from the 80's.
Click to expand...