Wow trudeau is full of it lol. At least city has the power here 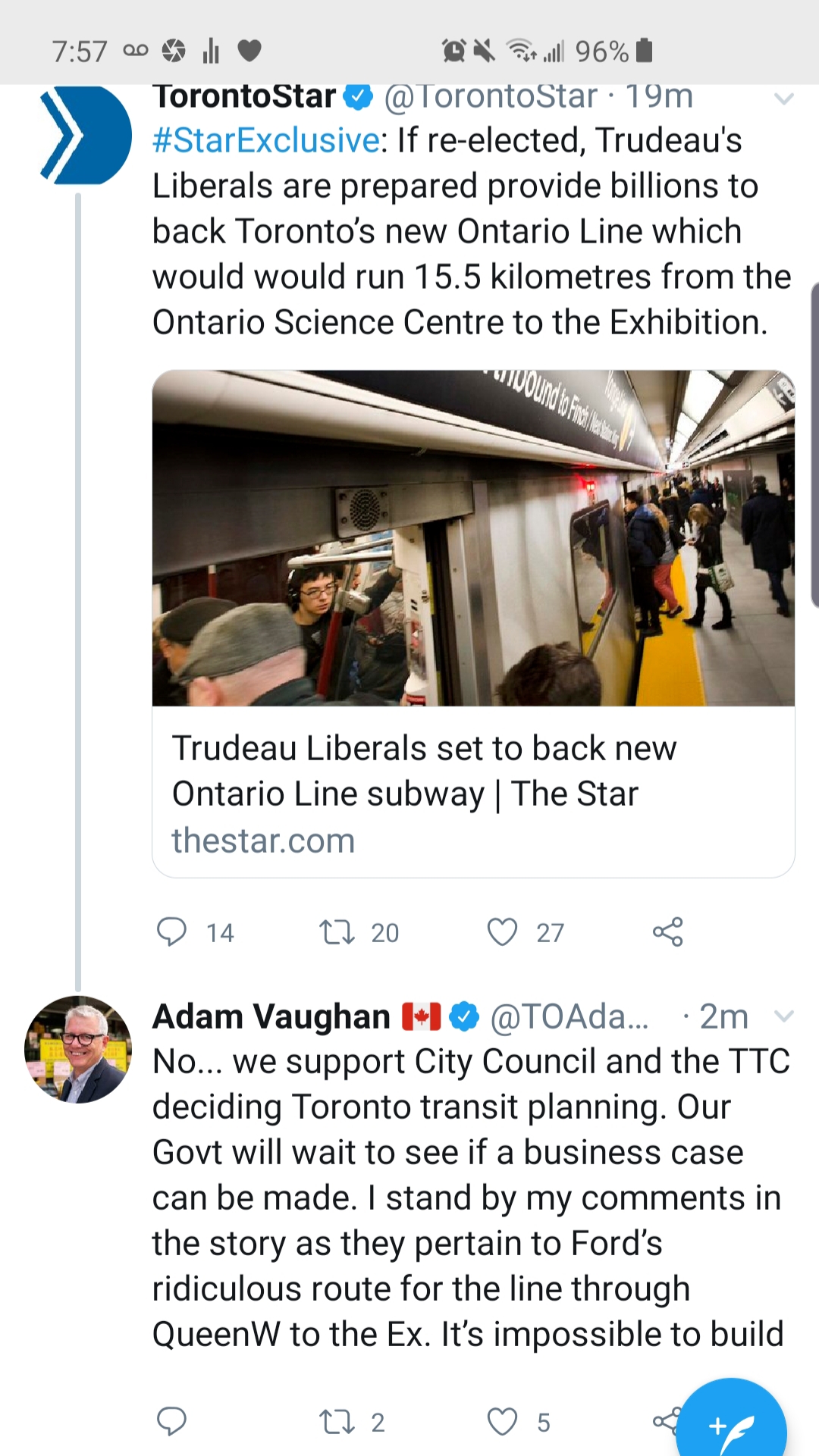 At this point, despite my general misgivings, shouldn't the government plow ahead with the Ontario line? Besides sticking it to Ford, trying to go back to the TTC DRL plan just makes it a sure thing nothing will get built. I'd be pushing Dougie to get shovels in the ground before the next provincial election so that you at least get a new transit line downtown. No line is worse than the Ontario line.

The most sensible compromise is to keep the original Queen TTC alignment and add the northern extension to Eglinton. The phase 2 extension to Sheppard should begin the approval process immediately as that component is vital to ensuring adequate relief of the Yonge line. The meandering route through the core will not work, nor will the elevated segments in the east end.
T

I’d be curious to see public opinion polls on the OL. Thus far I’ve observed a ton of criticism, and virtually zero support from the public, but the internet can be a bit of a bubble

TheTigerMaster said:
I’d be curious to see public opinion polls on the OL. Thus far I’ve observed a ton of criticism, and virtually zero support from the public, but the internet can be a bit of a bubble
Click to expand...

I'm against it simply because it fails the future proof test. Future capacity needs to be about 30 - 35k pphd and the OL in its proposed format maxes out at around what, 25k pphd? Build the line properly from the onset.
S

TheTigerMaster said:
I’d be curious to see public opinion polls on the OL. Thus far I’ve observed a ton of criticism, and virtually zero support from the public, but the internet can be a bit of a bubble
Click to expand...

I don't support it and or will ever use it but I'd just like something built. I've been beaten into submission by the Scarborough subway nonsense and now this. How many drawing boards need to be wasted on these so called projects.

Report says the OL should be supported... in principle.

Report then goes on to explain how critical it is for the OL to reach a capacity of 35k pphpd. What happens is it doesn’t?
G

So the City gets:
- Subway upload off the table
- Reimbursement of some money spent to date
- No municipal contribution required for Ontario line, Scarborough Subway, other projects.

In return for supporting $3.2 billion in federal money redirected to the Ontario Line.
Click to expand...

There has to be some catch here - surely??
N

Off the top; I'm very pleased the City as unambiguously as bureaucrats can, called out the province on the nonsense they trotted out some months back.

-Since the IBC evaluated the Ontario Line against the Relief Line South, a project with a much narrower scope, it did not make an "apples-to-apples" comparison. Using projects of a more similar scope would have provided more meaningful conclusions on benefits and costs.

-The IBC contained some inaccurate assumptions about design, vehicle technology, operations and delivery that were being considered for the Relief Line South. For example, fully automated operation was being planned and delivery options, including P3, were to be evaluated

-There are many instances where conclusions are reached and/or statements made where no backup documents are provided
Last edited: Oct 16, 2019
An environmentally conscientious, libertarian inclined, fiscally conservative, socialist.

GabrielHurl said:
There has to be some catch here - surely??
Click to expand...

‘The Province needs the federal money. Unlike money already committed, Trudeau’s govt. is deliberately giving the city power to decide where it goes, to counter Ford’s attempt to take ultimate power over the city.
N

Its very clear from the report that the City has no intention of allowing this to go forward in its current form; to the extent it has a choice.

That they really want the same vehicle type as Line 2 for interoperability, economies of scale on train and train parts purchase etc etc.

That the OL design may require expansion of the LSE embankment which could create substantial problems including effecting existing city parks/community centres and private property.

That design mitigation is required for any elevated sections, and those costs are not currently budgeted.

BIG note; the report also throws the City's own design at Osgoode under the bus.

Proposes running OL/RL down Simcoe, having interchange at St. Andrew, then west running under either King or Front.

Further modifications to the representative alignment could improve public health and environment considerations in the western section, particularly some heritage impacts that were emerging during the preliminary design and engineering work being undertaken for the Relief Line South. If the alignment were to follow Simcoe Street to include an interchange station at St Andrew station, impacts to key cultural heritage resources around Osgoode station (e.g. Osgoode Hall, Campbell House, and 250 University Avenue) could be minimized by avoiding the need to construct a second platform on the Line 1 Osgoode station.

The Ontario Line could enhance support of employment growth by considering an alignment following Simcoe and Front Streets, with an interchange station at St. Andrew. Providing a station closer to the Financial District and along the southern edge of the dense employment in the King-Spadina area, this alignment would have an even greater employment concentration of 320,000 existing jobs within 800 metres of stations, projected to grow to over 405,000 by 2041.
An environmentally conscientious, libertarian inclined, fiscally conservative, socialist.
You must log in or register to post here.
Share:
Facebook Twitter Reddit Pinterest Tumblr WhatsApp Email Share Link