The original Toronto Gloucester cars were "off the shelf" models from Great Britain.

Using wood extensions on Gloucester cars to model, the TTC designed subsequent subway cars to be longer and using aluminum. The length was measured to fit the curves in the existing tunnels. This resulted in the longest subway cars, at the time (1950-1960's).

Looks like they are redesigning the Ontario Line cars to "fit" their restrictions.
[SIGPIC][/SIGPIC]W. K. Lis
S

Rainforest said:
Never said we "must" use massive trains. Just that TTC trains are not outliers, and therefore are a valid option rather than something to be avoided at all costs.
Click to expand...

I think the point was that comparing metro/subway trains to mainline regional railways (i.e. Crossrail and Paris RER) are not fair comparisons. Compared to other subway trains, especially of Toronto-sized cities and metro systems, TTC trains actually are quite large. But frankly, this is not really important.

Placing a hard constrain on one part of operation is not ideal. Possibly it will still work well if there are no other constrains / conflicting requirements, but we will not know that for sure until much later. Meanwhile, the corridor space is gone.
Click to expand...

Let's do some back of the napkin math:

Crossrail and Paris RER run 24-26 tph on two tracks (RER A actually gets to 30tph during peak, but let's use conservative numbers). So let's conservatively say the two local tracks max out at 24tph.

Capacity will be lower if trains have different stopping patterns since the train that stops more will be slower, but this bit of LSE is really short and only has at most one stop on GO express that is not on VIA, East Harbour (even if Gerrard existed, it would probably be local only). With smart scheduling and operations plus fast accelerating trains, the capacity impact can be minimized.
NS runs 6 tph local plus 7 tph express (total 13tph) on two tracks through Amsterdam Lelylaan where the express intercity trains skip two stops.
Since each additional stop makes the speed differential between local and express greater, each additional stop means spacing between trains needs to be greater to allow space for express trains to continue moving without stopping for a local train in front of it.
Based on this let's just say conservatively that 15tph is the limit for the express tracks with both VIA and GO operating where VIA only skips one stop. If VIA trains just slowed down a tad to have the same average speed as the GO trains, 24+ tph would probably also be possible on the express tracks, but let's just use 15tph for now as a no-compromises conservative estimate.

Let's say VIA does insanely well and runs 2tph to Ottawa/Montreal via the Stouffville Line/HFR and 1tph via Kingston.

It goes without saying that those services are more than doable on four track. Only a fraction of the capacity is used.

How many ppdph is this?
Let's assume we're using single level EMUs, let's use the Crossrail Class 345 trains as an example. They are 200m long and have a max capacity of 1500 people according to their website. If GO continues with 300m platforms, that's 1.5x longer, so each train could hold 2250 passengers at most.
Multiplying by all of the GO services here gets us to 45,000 ppdph in the peak direction, and 27,000 ppdph in the other direction. (excluding VIA)

Say VIA stays at 3tph, with HFR service still using the Stouffville Line.

Let's keep VIA at 3 tph, with trains every 30mins to Ottawa/Montreal via HFR still on the Stouffville Line and every hour to Kingston.

That gets us to our conservative capacity limits of 24tph local and 15tph express.

With 300m single level trains this is... 81,000 ppdph excluding VIA. Absolutely insane.

OK, the last scenario was already getting somewhere completely ridiculous.
But, what if we use non-conservative estimates, allow VIA trains to slow a bit near East Harbour, move HFR VIA service from the Stouffville Line to the Don Branch and CP line (where it makes more sense anyways) and make a scenario that really pushes the limits?
Let's say peak capacity is now 30tph on local and 24tph on express. What's possible?
Example:
- LSE local: 12 tph (5 min headway)
- LSE express: 12tph (5 min headway)
- Stouffville local: 18tph (3 min 20 seconds headway)
- Stouffville express: 10tph (6 min headway) -> this would definitely require a 4 track Stouffville Line, somehow
- VIA to Kingston: 2tph (30min headway)
- VIA HFR to Ottawa/Montreal moved to Don Branch and no longer needs to be considered (though if Stouffville express is removed, there will still be more than enough room)

Calculating ppdph the same as before, we get: 117,000 ppdph on those four tracks excluding VIA, running 300m single level trains. Obviously Union would be completely overwhelmed before the line gets anywhere close to this, and there is no way we would run 300m trains at this sort of frequency, but the potential maximum is insane.

Operations before electronics before concrete is the Swiss railway maxim; if you can get what you need by improving operations, do that, if not, then upgrade signalling/electronics, and only if neither operations nor electronics can solve your problems or get what you want, then you start building tracks and tunnels.

The plans under the GO Expansion Business Case certainly do not require 6 tracks from Gerrard to East Harbour, 4 tracks is far more than sufficient.

If we want almost subway frequency regional rail, similar to the third or fourth scenario above, then we need a bit more stuff - organized and reliable through-run services, modern signalling, fast accelerating EMUs on all services, some grade separations to eliminate conflicts (Scarb Jct, plus one west of Union, plus maybe one for the Richmond Hill line if VIA uses that), and a much more efficient track layout through Union (basically, the TRBOT report). But these things are needed for subway frequency regional rail regardless of whether or not the short section from Gerrard to Cherry is 6 track or not.

So in either case, whether we want GO Expansion Business Case levels of service or almost subway frequency, the OL tunnel is not strictly necessary for providing regional rail.

The only cases where 6 tracks would be necessary would probably be the following:
- If we want close to subway frequencies on GO, and VIA uses like 10tph or something, and Stouffville express trains exist at decent frequency
- If we want sub 5 minute service on LSE and Stouffville, express and local. Given how large the potential capacity is as outlined in the third and fourth scenarios above, I find this pretty unlikely, and besides, Union and USRC would probably be the bottleneck here, not four tracks between Gerrard and East Harbour, which would probably mean building a tunnel for GO/VIA.
See my thread for my 3D model of VMC future development here

Two of Metrolinx's justifications (we should call them retrofications) for moving the subway station from where TTC planned on Eastern, to parallel with East Harbour, were the cross-platform transfers and that it was too far to the GO Train. 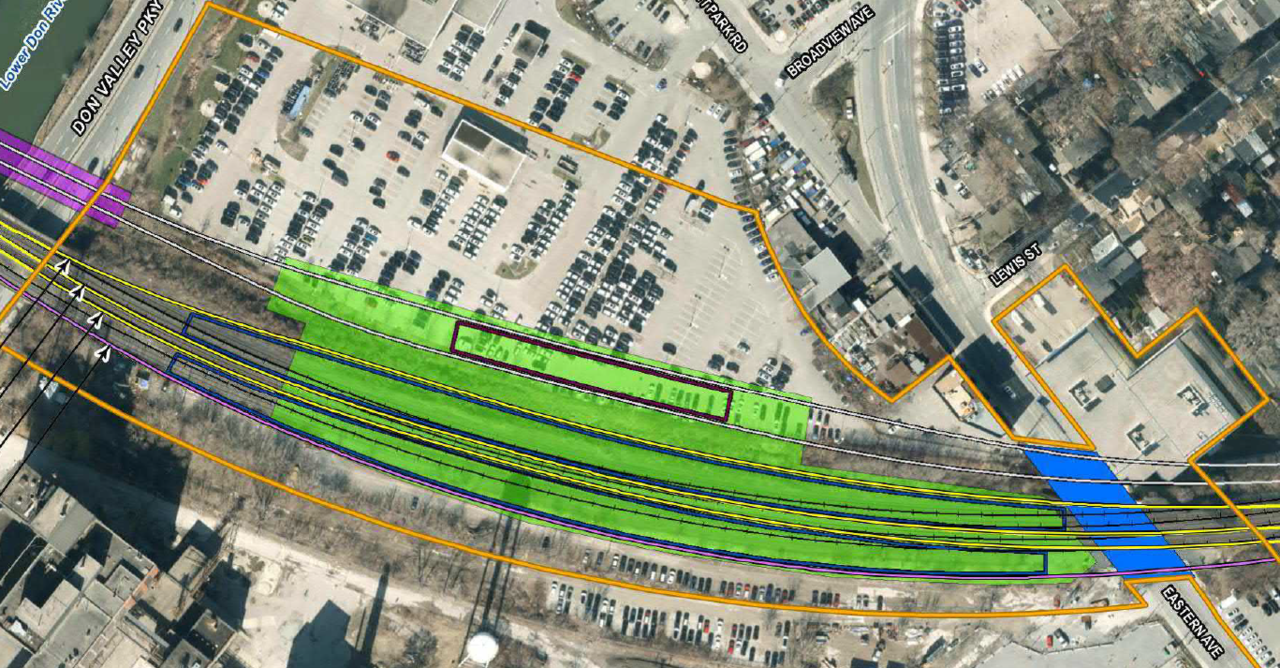 Um, no. Those are the GO platforms that touch Eastern. The OL platform is the small center one roughly in the middle of the site.

The location of the OL platform is fine - it is centred above the future Broadview South extension.

AlvinofDiaspar said:
The location of the OL platform is fine - it is centred above the future Broadview South extension.

It is fine, but nit-picking every part of the above-ground OL is how we will prove that a deep station with a 10 minute transfer time just to get to the streetcar stop is superior.

tsm1072 said:
It is fine, but nit-picking every part of the above-ground OL is how we will prove that a deep station with a 10 minute transfer time just to get to the streetcar stop is superior.
Click to expand...

There are legitimate issues to pick on, this isn't one of them (and keep in mind Metrolinx has also created a few of these lengthy transfers of their own and handwaved them).

the East Harbour Station is now only about 450m from the Queen Station, and about 1.5km from the Corktown station.. I really believe a Cherry Station is warranted. I used to be skeptical on it's utility but with each respective station seeming to shift as far away from each other as possible, it seems useful.

Am I wrong to think that the Ontario Line may never actually happen? Doug Ford's PCs are likely to win a majority in 2022, but very unlikely to do so by 2026. By 2026 the new Liberal government may just cancel the thing.
https://twitter.com/AdmiralBeez
Trending #BlockedInToronto on Twitter.

Admiral Beez said:
Am I wrong to think that the Ontario Line may never actually happen? Doug Ford's PCs are likely to win a majority in 2022, but very unlikely to do so by 2026. By 2026 the new Liberal government may just cancel the thing.
Click to expand...

The line will be half-way done by 2026. Construction starts very, very soon at early works.

innsertnamehere said:
The line will be half-way done by 2026. Construction starts very, very soon at early works.
Click to expand...

Okay, thanks. I'm just reminded of the canceling and filling in the Eglinton Subway as the political winds changed.

The Eglinton Subway We Almost Had

This installment of my “Retro T.O.” column for The Grid, which launched the series, was originally published online on March 20, 2012. As the original introduction put it, “introd… 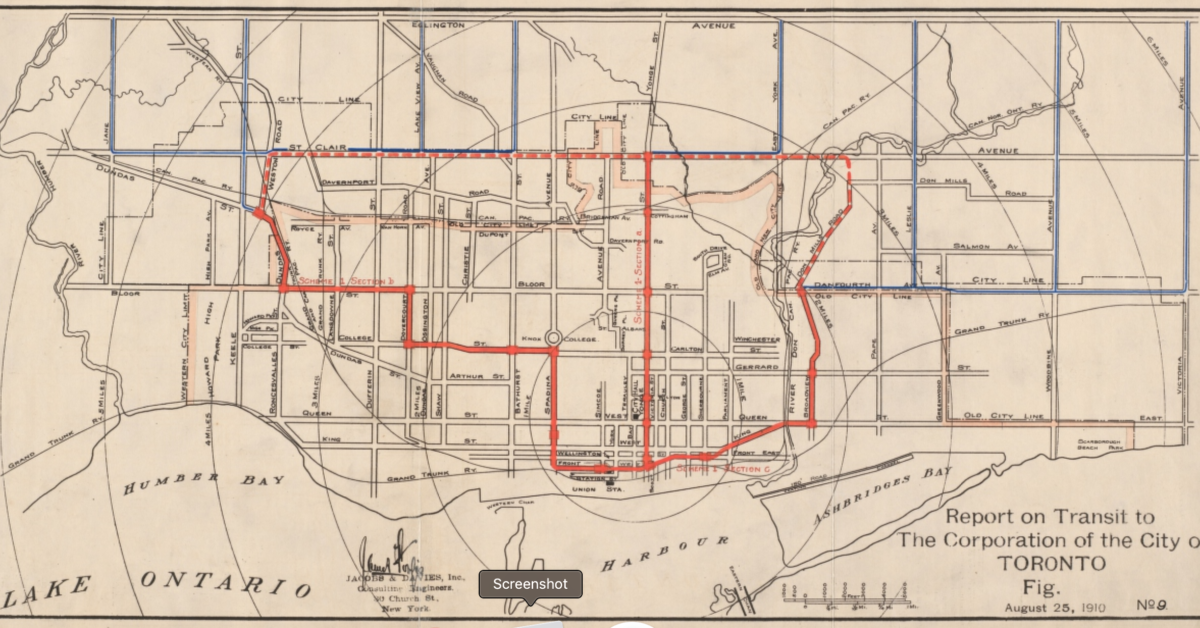 Last week's dramatic subway announcement is the latest of many

CapitalSeven said:
Um, no. Those are the GO platforms that touch Eastern.
Click to expand...

I'm confused. What do you mean by no? I said Riverdale was 250 metres from the GO platform at Eastern. What did I say wrong?


AlvinofDiaspar said:
The location of the OL platform is fine - it is centred above the future Broadview South extension.
Click to expand...

In the framework of just the East Harbour site it is fine, but as a retrofication for moving the alignment off Carlaw/Eastern it's weaker. That aside the short spacing between East Harbour and Riverdale, and now the lack of a good connection to the Corktown Commons area and Cherry area is unfortunate.


tsm1072 said:
It is fine, but nit-picking every part of the above-ground OL is how we will prove that a deep station with a 10 minute transfer time just to get to the streetcar stop is superior.
Click to expand...