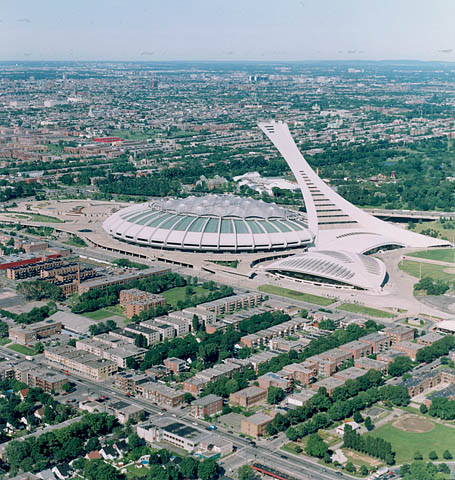 MONTREAL â€“ The Olympic-sized bill for the Big O is finally history some 30 years after the stadium was built as the main venue for the 1976 Summer Games.

The final price tag for Montreal's Olympic Stadium and the structures in the adjoining Olympic park was $1.47 billion, Gilles Lepine, who runs the facility, said Tuesday. The last payment was delivered in November.

"Maybe it was too much, but that was in the past and you have to look forward," said Lepine, president of the Olympic Installations Board, the provincial government agency that manages the stadium known as The Big O.

"We have a facility here and we have to make it as useful and profitable as possible."

He said the final tally includes the cost several years back of converting the Olympic velodrome into the Biodome, a tourist attraction.

Now, the stadium needs a new roof, although a price tag has not yet been set for that. An engineering firm is to submit plans in the coming months, Lepine said.

The stadium is closed four months per year in winter because fire marshals fear it may not withstand the weight of snow.

It is one more indignity for the domed stadium in the city's east end.

It's main tenant after the Olympics, baseball's Montreal Expos, moved to Washington, D.C. after the 2004 season, while the CFL's Montreal Alouettes moved out in 1999 for the outdoor Percival Molson Stadium downtown.

However, the Alouettes still play twice a year at Olympic Stadium to take advantage of its 50,000-plus seating capacity â€“ the largest by far of any stadium in Quebec. The Als also still use office space and training facilities at the Big O.

Lately, it has been used mostly for trade shows, concerts and special events like dog shows and motocross competitions. Lepine said it was in use 200 days in the past year.

And Lepine takes exception to the oft-made suggestion to tear the stadium down to save further spending on a facility that seemed doomed from the beginning.

He also said it was a key tourist site, particularly the observation tower that looms over the east side of the building.

It also has excellent indoor pools for competitive swimming and diving, which are home to Canada's synchronized swimming team.

But most of the attention has gone to the stadium's problems and cost overruns.

Designed by French architect Roger Taillebert, it was not completed on time for the 1976 Games and the complex retractable roof, which took years to complete, never quite worked as planned.

In 1991, a concrete beam fell off the side of the stadium. Luckily, it didn't hit anyone but caused the Expos to play only road games for a month while the building was inspected and reinforced.

The first permanent roof partly collapsed, forcing yet another to be installed.

Much of the stadium was paid off with a special tax on cigarettes in Quebec.

"You can say it was Quebec smokers who paid for that, but we can say that this is good for the health of all Quebecers," added Lepine.
F

I could only imagine if Toronto has won the 2008 Olympic Bid. A 100,000 seat Stadium and swimming complex would be raising as we speak on the Portlands.

It would be useless after the games if we got them. The skydome would have to be torn down or the olympic stadium.. lol..
M

If a 100,000 seat stadium was under construction right now that NFL bid would not seem so far fetched.
A

Possibly, this is the wrong post to push for a stadium, given the Big O's history. I still find the Big O impossibly ugly and silly looking in its context, bordered as it is by two storey wooden shanties. I'm always expecting to hear a megaphoned message about submission to a power from another world come out of the tower.

The SkyDome is not even 20 years old, and frankly, we've paid enough for it. I really hope portlands development occurs quickly so that future talk of a stadium at the port remains only that.
S

I've always been quite fond of the Olympic Stadium design, though I agree the location could be better.

As for SkyDome, Rogers has more improvements planned, including new cladding on the exterior. I think people are far too harsh on it.
T

My question is 1.47 billion in 1970-1976? Is it made of gold or did an entire generation of mob union bosses become millionaires?
S

^ $1.47B includes construction, renovation, repairs, inflation, and 30 yers of interest.
A

An interesting "fact" about the Olympic Stadium: it is actually constructed of more concrete than used to build it.
A

As an Olympic-related aside: boy, am I dumb. I didn't realize until very recently that the Olympic hockey this year took place in Pier Luigi Nervi's Turin Exhibition Hall. (I *knew* that roof looked familiar...)
M

I love this building and sit in the park around it whenever I'm in Montreal.

Now that the 30 year debt is paid off, perhaps Montreal can look past the debt which no longer exists and take a good look at how it can be redeveloped.

The interior is severely lacking and in the areas where the food stalls should be, is a dark, grimey old hallway reminiscent of a DOOM (videogame) setting.

The outside can use some patching up too and a new roof is needed as mentioned above.

I think that with this being the only 50,000 seat stadium in Quebec, it will eventually find a use. Give it time.
B

I have a feeling that, after 30 years, it is a one-use wonder.
A