I've been following a fair bit of the transit discussion here on UT, in particular the SmartTrack thread and rather than pollute that thread even more with AU stuff ( ) I thought I'd post this separately.

The Regional Rail Link (RRL) - born out of the panic in the GFC and a benefactor of the Kevin '07 panic money dished out at the time - is finally operational. Construction finished last year however the previous Liberal Gov dragged its heels with ordering new trains and the services had to be delayed 6+ months so as deliveries from the local Bombardier base could start rolling.

In a nutshell, the RRL project was designed to provide a dedicated track pair for regional trains (they use the brand name V/Line) which operate on 160kph tracks outside Melbourne to the 4 largest cities/regions after Melbourne in Victoria.

The RRL bunches 3 of the 4 primary regional routes onto a single track pair through the inner city thus removing them from metro lines.

Geelong trains - pop 200k - used to fight for track space with the Werribee Metro line all the way from the outer edge of the Melbourne Metro (at Werribee) into the main regional terminus at Southern Cross.

Likewise, Ballarat - pop 100k - and Bendigo - pop 95k - trains combined at Sunshine and fought for track space with the Sunbury/Sydenham Metro line. (Bendigo will still share some track with Sunbury/Sydenham, but not in the inner or middle ring of the city).

From yesterday all Geelong trains leave the old alignment and now skirt around the existing outer suburbs of Wyndham Vale, Tarneit and Trugganina and join the Ballarat Line and then a new dedicated track pair runs from Sunshine to North Melbourne whereafter there is now a split of the two tracks so as Regional trains can enter/exit regional platforms on the city side and new regional platforms on the Docklands side without conflicting with the metro services which also run through Southern Cross.

It cost $3.65 billion - mainly because the inner-city part involved expensive property acquisition to fit a new track pair in the existing alignment - and the new track measures 47.5km (double track)

Regional trains in Victoria are DMUs and the Bombardier V/Locity trains have a top speed of 160kph where the alignment and signalling system allows it (up until now, outside Melbourne metro only). 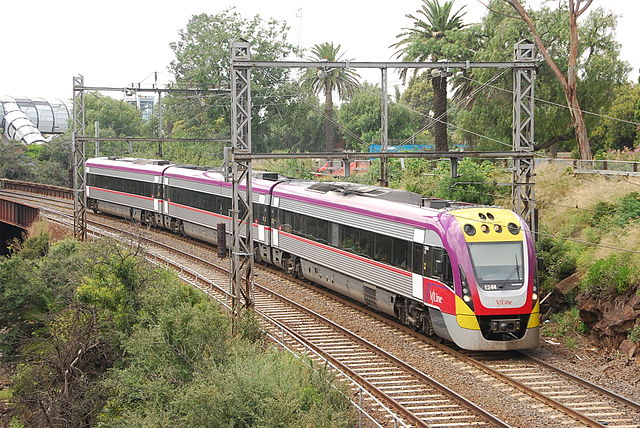 The new Wyndham Vale Station - that you can see in the video - is where the sprawl-belt of Melbourne currently runs up to and Tarneit (not visible in below Video) is now being developed as well.

The main benefit of this line is separation of regional and metro rail traffic and the removal of all regional services between Sunshine and the city for Ballarat (and partially Bendigo) means there's now more space for metro services, ditto for the Werribee Line.

The V/Line timetable is now in effect and these two new outer-edge suburban stations are going to have quite frequent services: 10 min in peak and 20min off peak and the journey is going to be made in under 30min from Wyndham VAle (unheard of on the Werribee metro line!).

The new metro timetable is coming toward the end of the year and I expect an increase in overall Metro frequencies (at present Sunbury/Sydenham is 20 min off peak, which is woefully inadequete, no more Regional Services to contend with = space for 10 min frequencies in off peak here's hoping).

Here's the timelapse from the start to the end of the entire project.


Highlights from the video:

- first 4-5 min is vey much a rural setting, but eventually it'll all be suburbs over the next 20-30 years. Some interesting urban centres are eventually planned too.
- the two new stations, have been built to eventually cater for 4 tracks (see around 1 min mark).
- the speed from the Geelong corridor (start of the video) to the Ballarat line (4 min mark) is around 160kph, save for a few curves. From after the joining of the Ballarat line - you can actually see the blue speed limit sign just on the level crossing after the junction - to Sunshine it's 130kph.
- Sunshine Station, West Footscray and Footscray have all been completely rebuilt.
- Speeds from Sunshine to the city appear (not absolutely sure) to top out at 80kph.
- 7 min mark of the video is the new track layout for Footscray (compare to the image above).
- 7min mark is footscray, where the Geelong trains (Werribee Line) used to join the original 4 tracks and fight for track space with metro services into the city.
- 8 min mark is where the new RRL splits into two track pairs - one to the right which then goes on an older flyover and allows trains to use the city (left) side platforms, the video completes the journey to the new Docklands (right) side platforms at Southern Cross.