Historic photos from Toronto on this day

"Designed by Chapman and Oxley Architects in a Beaux-Arts style, they were constructed of a mix of stone and concrete. The nine pillars on either side of the main arch represent the Canadian provinces at the time of construction. On the top of the central arch is the statue 'Goddess of Winged Victory'. It was designed by architect Alfred Chapman and carved by Charles McKechnie. On either side of central arch are various figures representing progress, industry, agriculture, arts and science."
QUOTE TORONTO ARCHIVES.


The WINGED VICTORY certainly does not appear to be carved, it being with probability cast, as were the Gates themselves. THE ROMAN STONE COMPANY

was a product of Sir Henry Pellatt with Casa Loma being its centrepiece/showcase. Pellatt's Folly as it were, was of poured concrete, faced with natural stone and capped

J T CUNNINGHAM said:
The WINGED VICTORY certainly does not appear to be carved, it being with probability cast, as were the Gates themselves. THE ROMAN STONE COMPANY
Click to expand...

A good point - amazing to see what bad shape they were already in only 11 years after they were built.

March 26th: Just one photo today, of No. 336 Annette Street, Wm. Wilson residence, west of Laws Street in The Junction back in 1935: 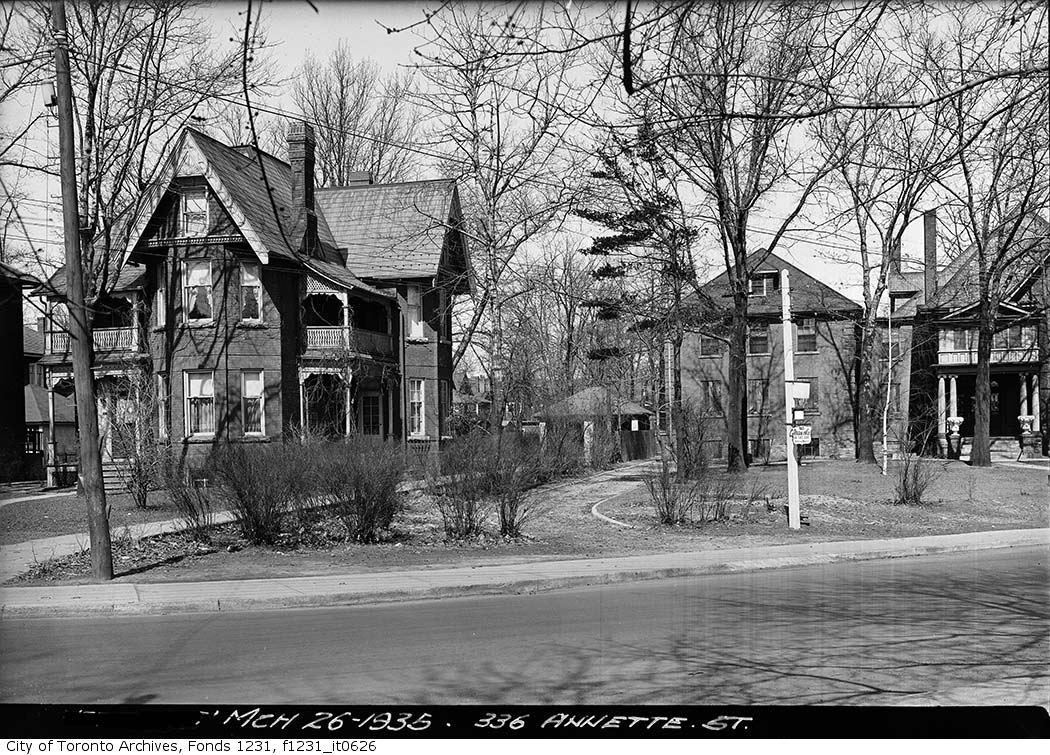 We start back in 1916 of the photo that started my fascination with dating all these photos - just north of the Mount Pleasant Cemetery is a photo of the Belt Line Railway at Merton Street near Mount Pleasant Road bridge. I was there with my daughter on our bikes last year in early April, then found the photo almost exactly 94 years later... 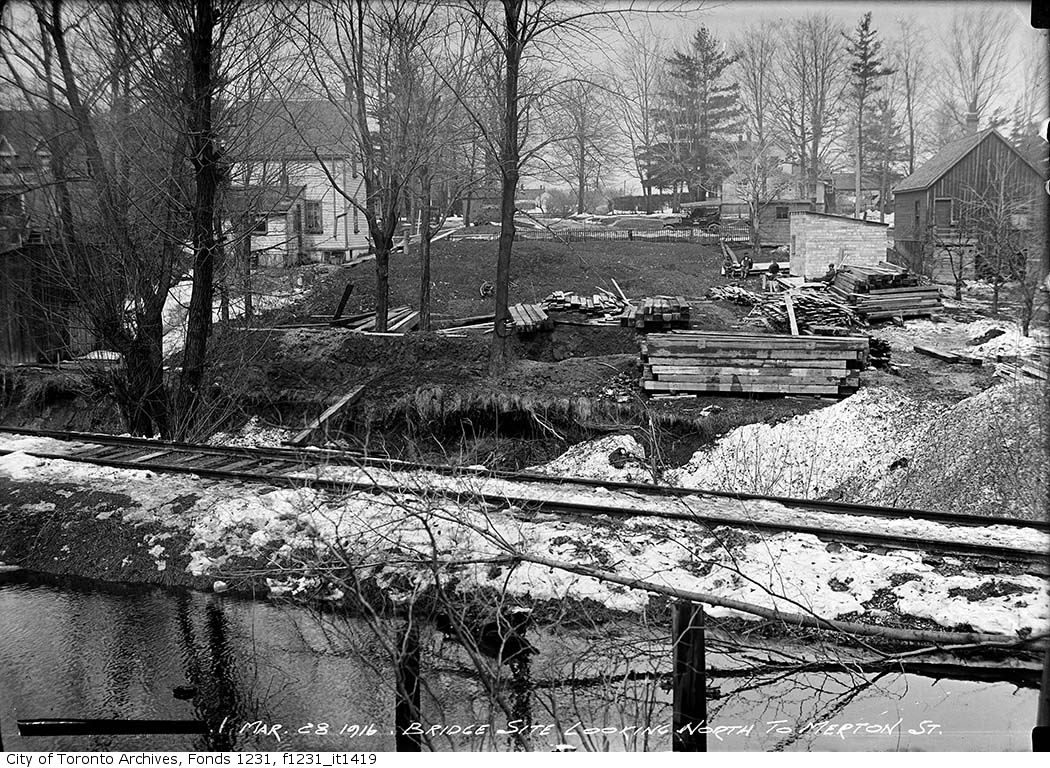 There was obviously a bad thaw, and/or a lot of rain that year, as we move a bit north-west on the same day to Lytton Park where we see the Briar Hill Avenue 'bridge' damaged by floods. I'd love to place this more exactly... where is this house today? A photo from April 15th the year before places it west of Rosewell Avenue. Are we looking west? Is that the back of a house on Birdsall? #29? 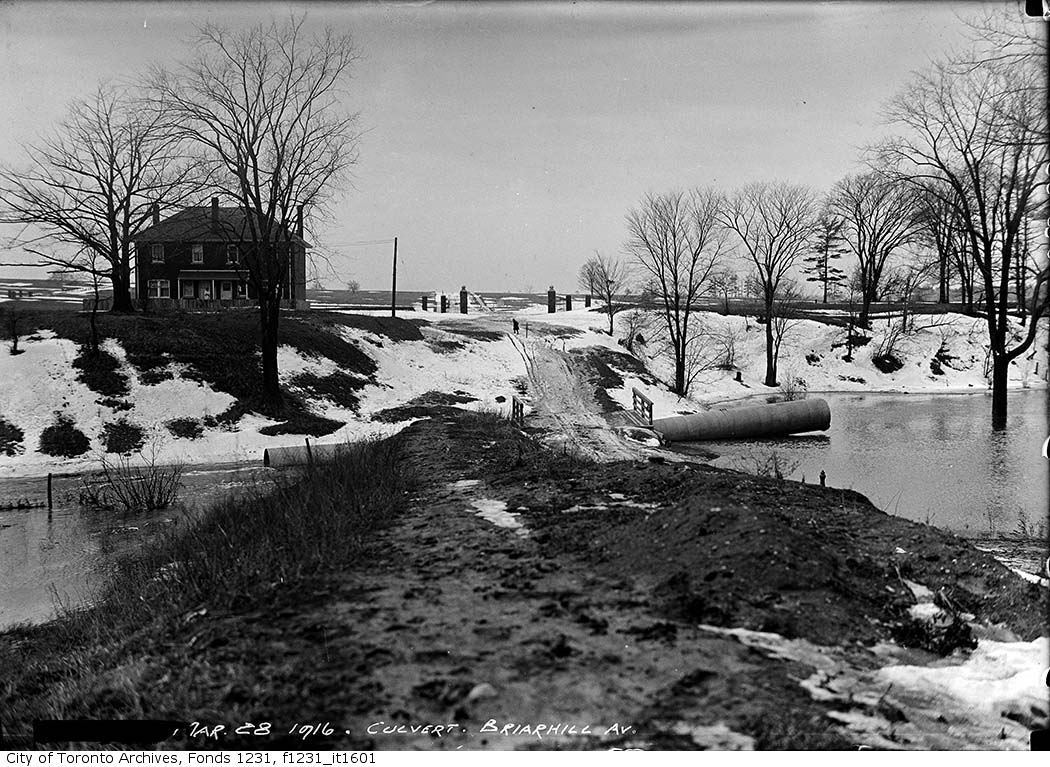 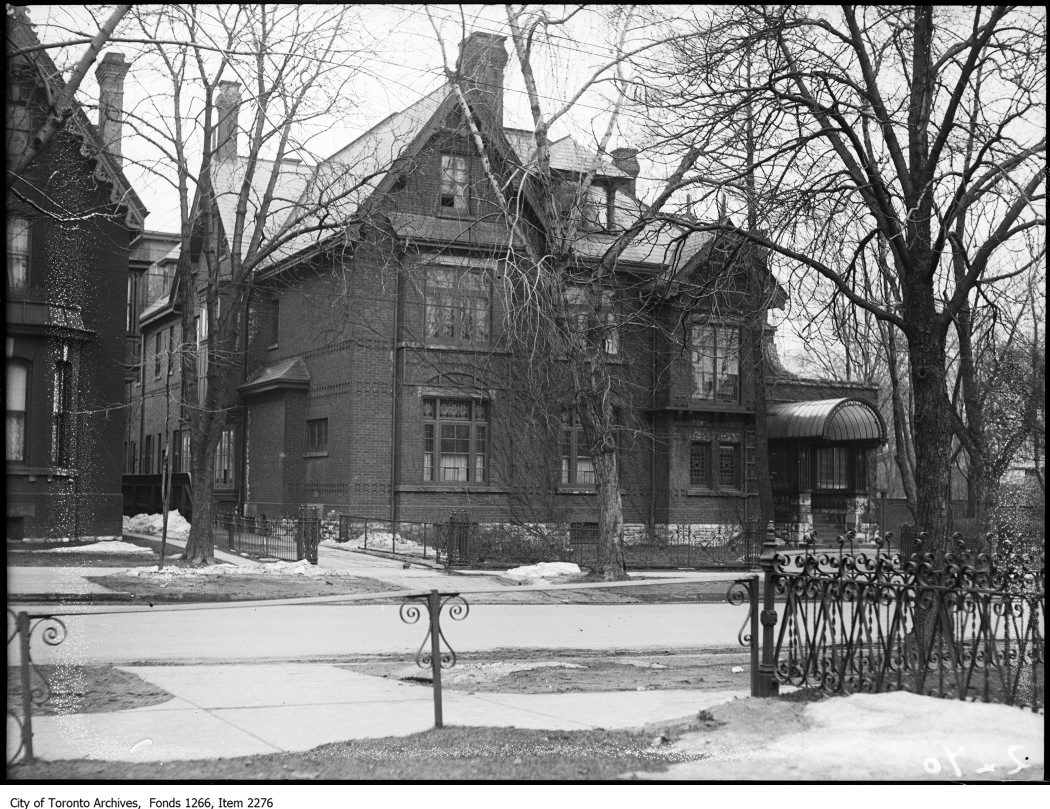 We've talked on other threads about these little street-side gas pumps; here's one from 1942 in Little Italy out front 783 Dundas West with the Centre Theatre across the street (originally the Duchess Theatre - you can see two other shots of the theatre here as well as an earlier version of the gas pump in 1923 with a glass bulb on the top): 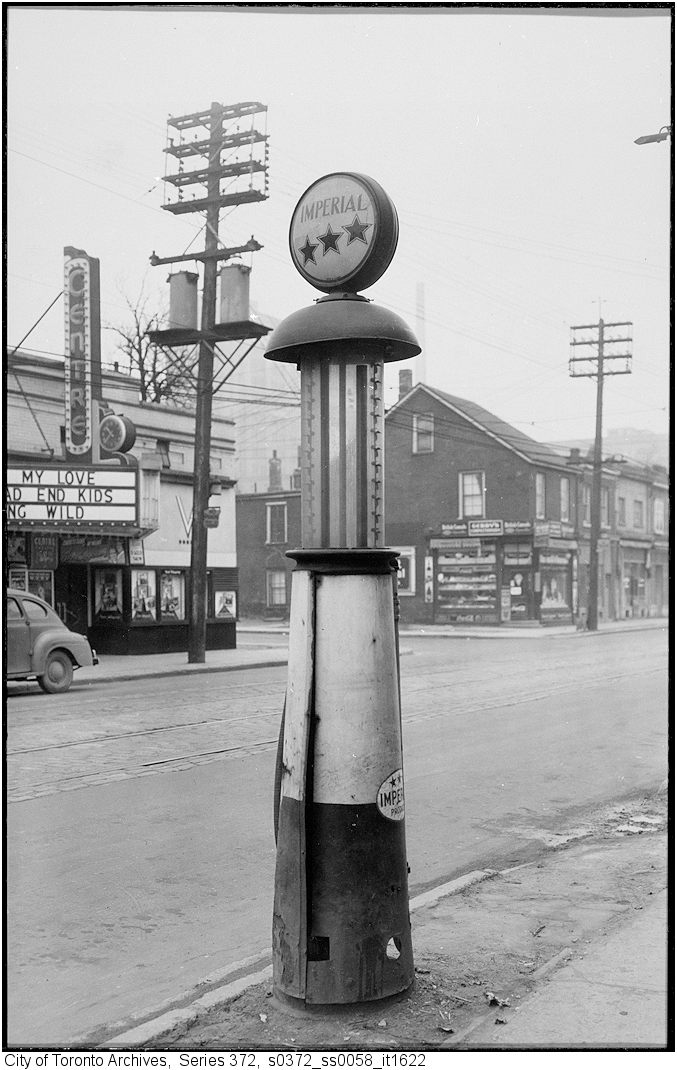 Finally, in 1949 we go for a tour of Christie Street. Start here at Bloor next to Christie Pits to see all the locations with links to the City of Toronto Archive full sized photos.

March 29th Just two photos on the Historic Toronto Photos from March 29 starting back in 1922 with another shot from Lytton Park - this time No. 2668 Yonge Street - corner of Lytton Boulevard (Dr. McCormack House) 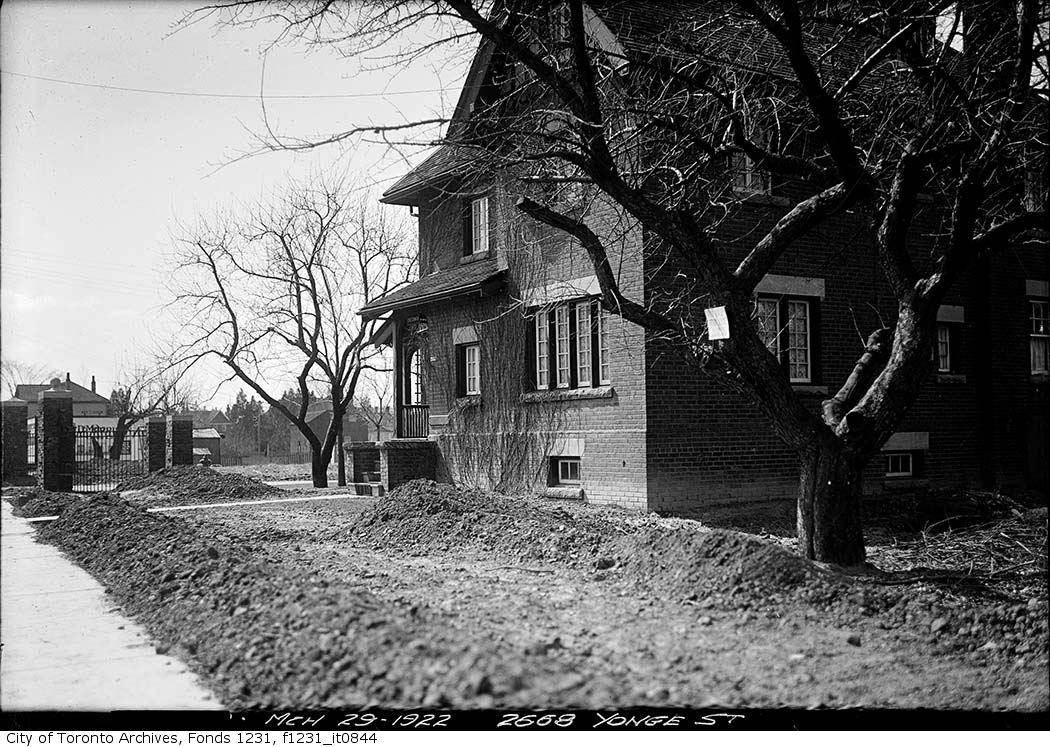 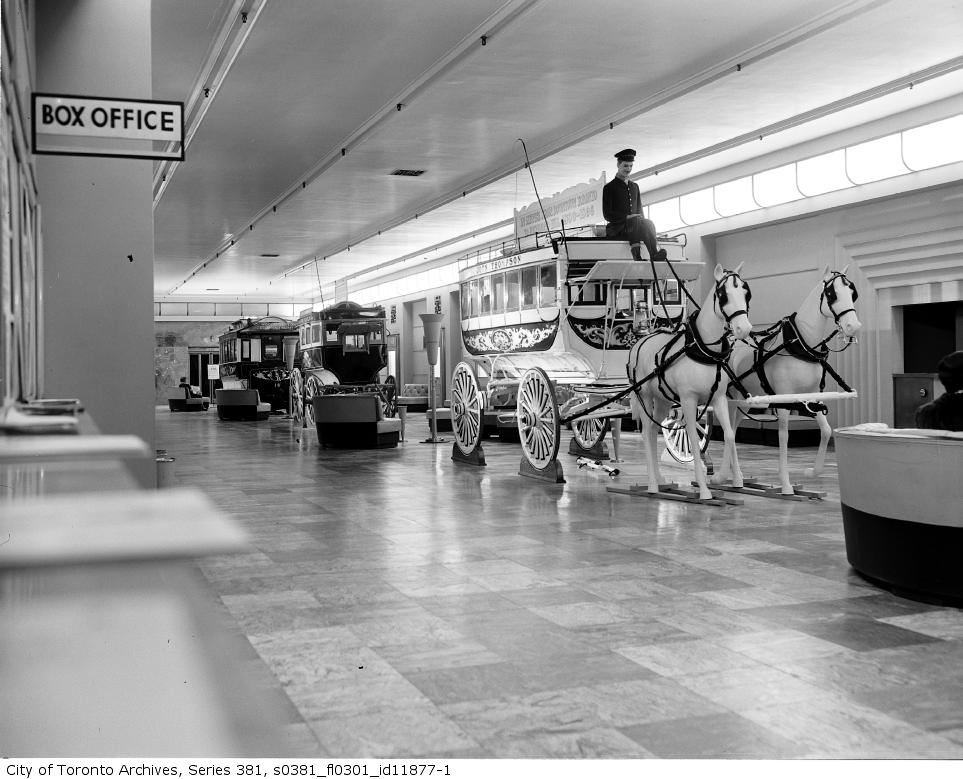 Not simply the store: the seventh floor Eaton Auditorium foyer (the Box Office sign and cove lighting is the giveaway)
S

adma said:
Not simply the store: the seventh floor Eaton Auditorium foyer (the Box Office sign and cove lighting is the giveaway)
Click to expand...


Thanks adma, I've updated the details of that photo!

March 30 Three photos today from the Historic Toronto Photos from March 30 page of two buildings in a 1933 North Toronto (I walked by today and can verify they are still there). The first is of the Montgomery firehall, just west of Yonge Street 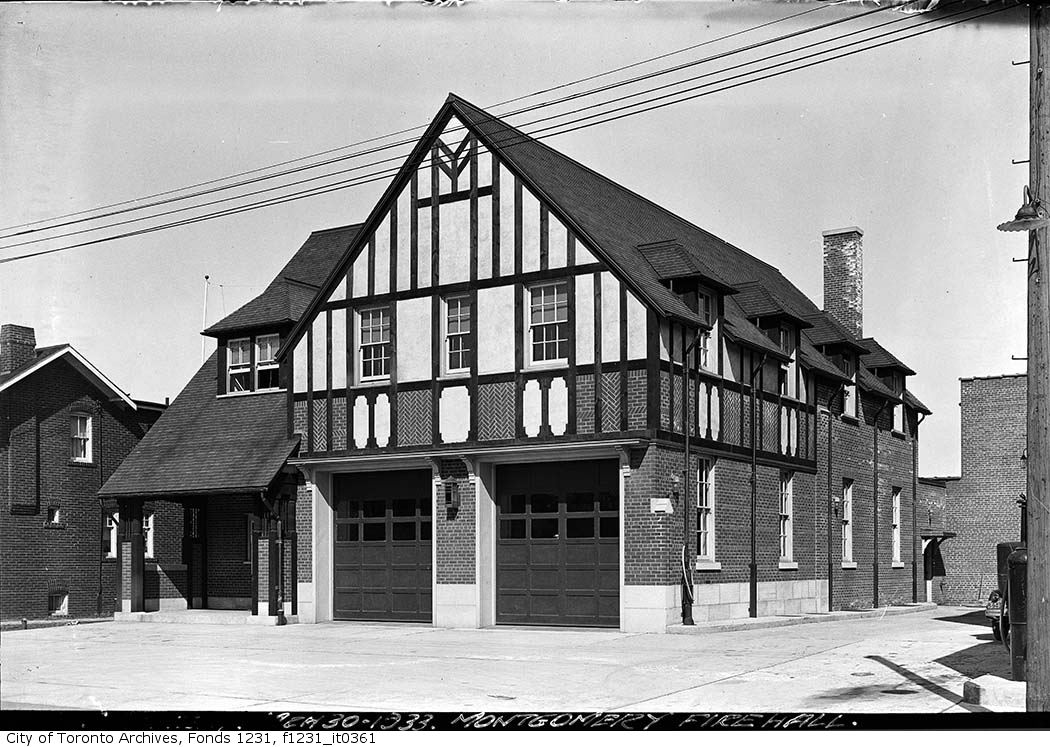 Then we pan back a bit to see both the recently completed Montgomery Police Station No. 12 and the Fire Hall: 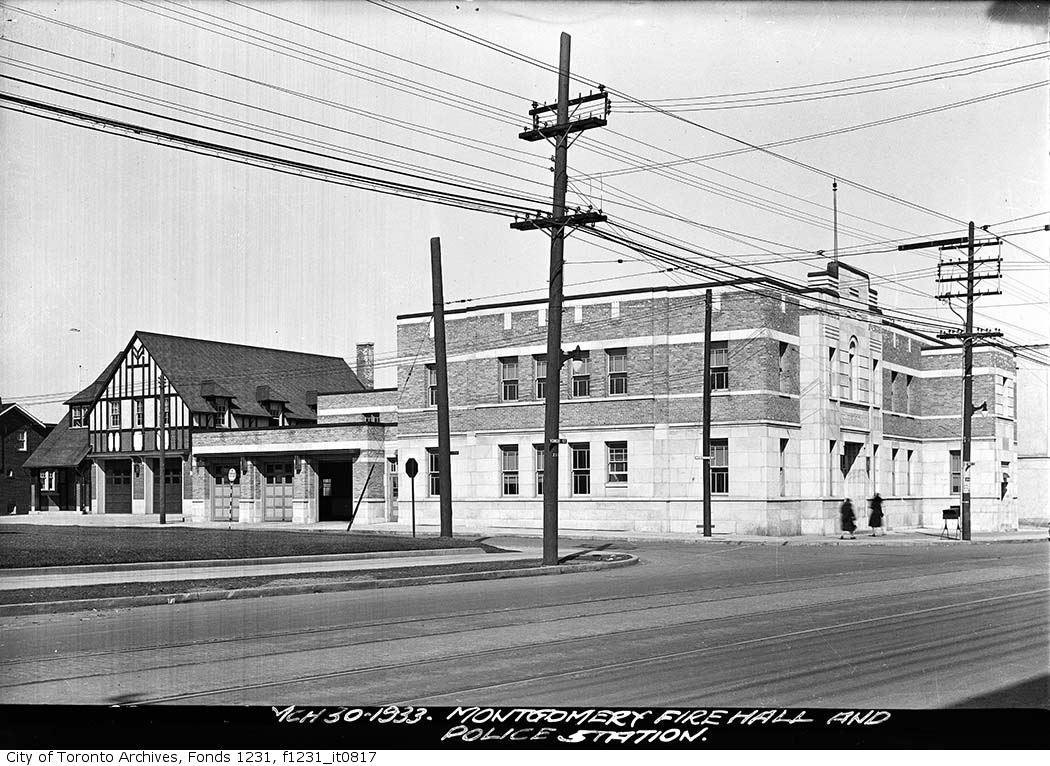 And then a closeup of the Yonge Street entrance to the Montgomery Police Station: 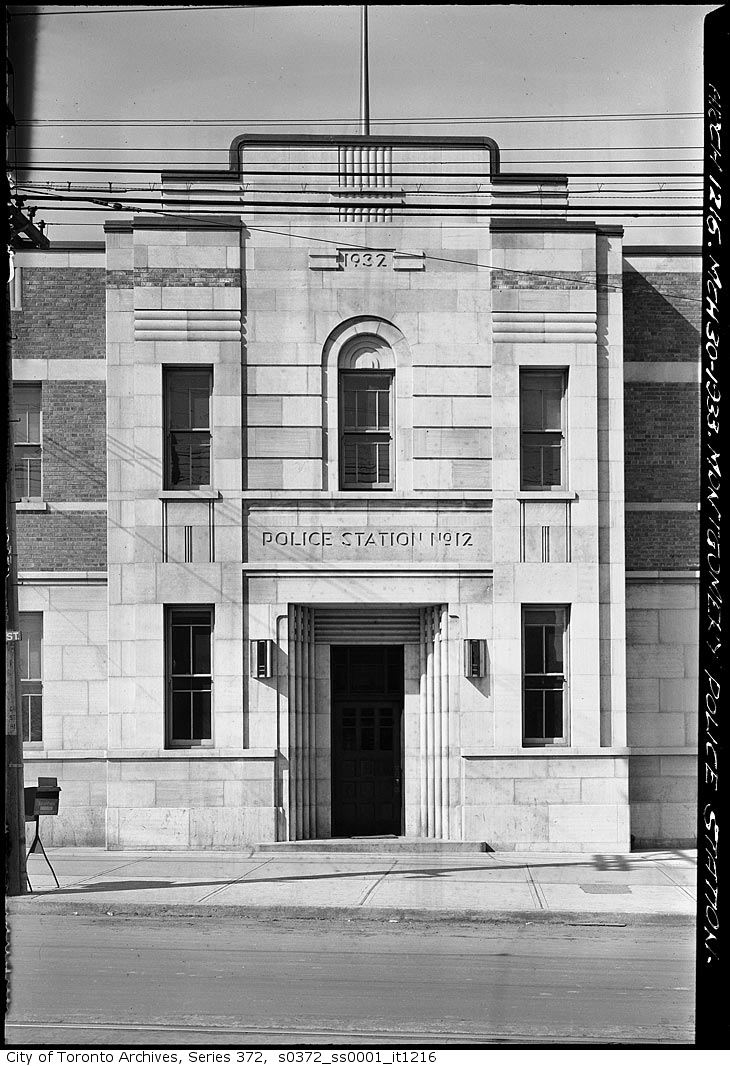 April 1st Just one photo on the Historic Toronto Photos from April 1st page
from the CNE in 1939 of a pretty straightforward view of the Princes' Gates looking west: 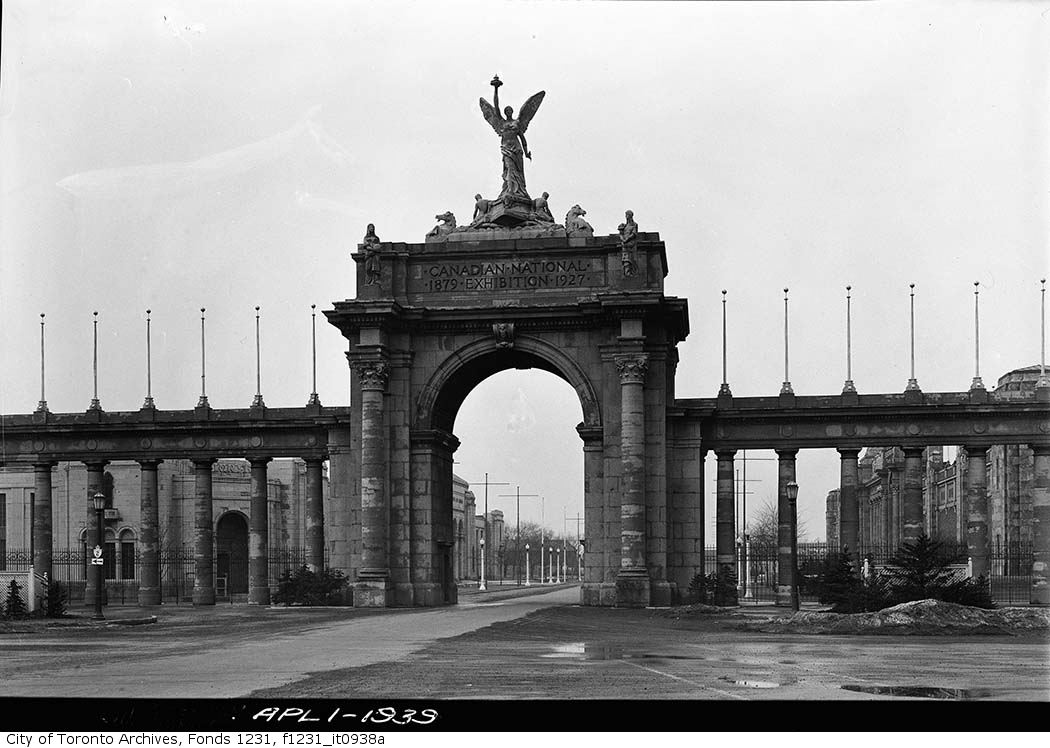 You can see over a dozen photos of the gates, from their opening in 1927 through the recent construction on my Princes' Gates page.
15 Hikes in Southern Ontario - Toronto Photoblog - Historic Toronto photos from today - Maps of photos and videos
J

Just a quite quick queasy quasi-querulous quest re the above date: 1920.

And be quit-claim, I quoth a quart of quality qualms will not quash nor quell this quarter-back upon this quarter-deck,

for no quiescent/quivering quiver am I!

Ha, I'm not really sure what to say, J.T., besides perhaps "QUITE!" (Or maybe QUIET!) I agree that the City of Toronto Archives estimate for the date of http://gencat.eloquent-systems.com/torontodetail.html?key=216544 is obviously early at 1920 seeing as the Gates weren't opened until 1927.
15 Hikes in Southern Ontario - Toronto Photoblog - Historic Toronto photos from today - Maps of photos and videos
J

"Ha, I'm not really sure what to say, J.T., besides perhaps "QUITE!" (Or maybe QUIET!)" QUOTE seemsartless.


Quantitative quality to the quote, Quicksilver!


(Just having some linguistic fun!)
IF only I had of questioned then, for the answers needed now . . .
J

was someone/group should, as we review these pics, take note

and alert The Archives as to their failings re dates/locations.


Reqards,
J T
IF only I had of questioned then, for the answers needed now . . .
S

April 2nd A variety of photos from the Historic Toronto Photos from April 2nd page, starting back in 1921 in High Park with two photos of the Howard monument. The first, a close up of fence from St. Pauls Cathedral, London, England 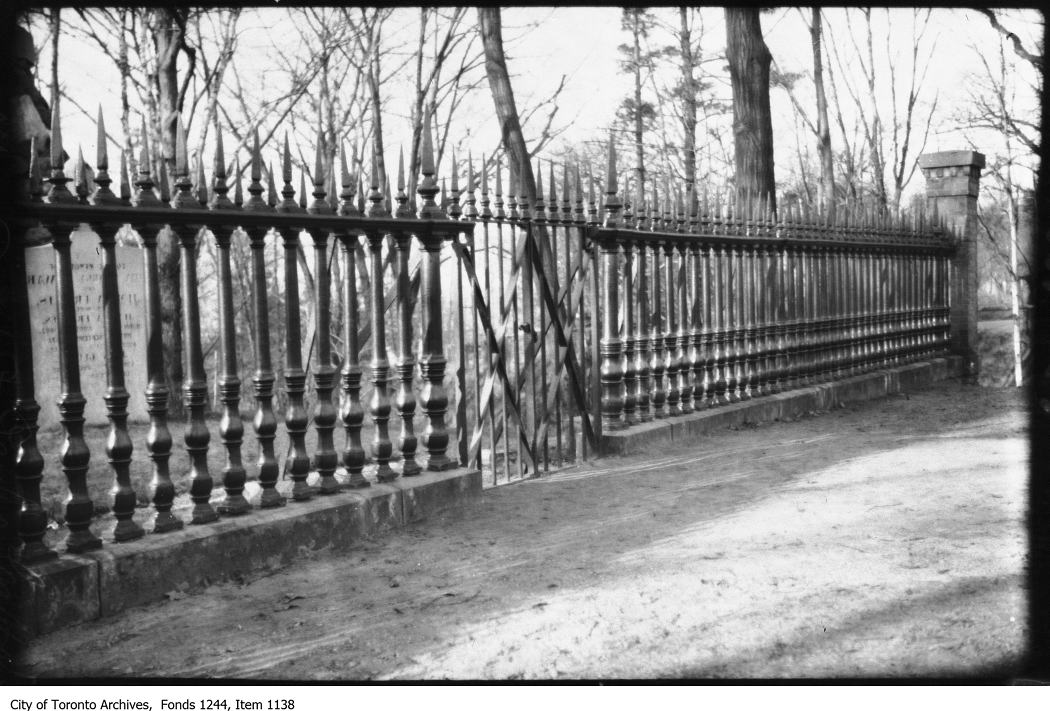 And then the Howard monument itself: 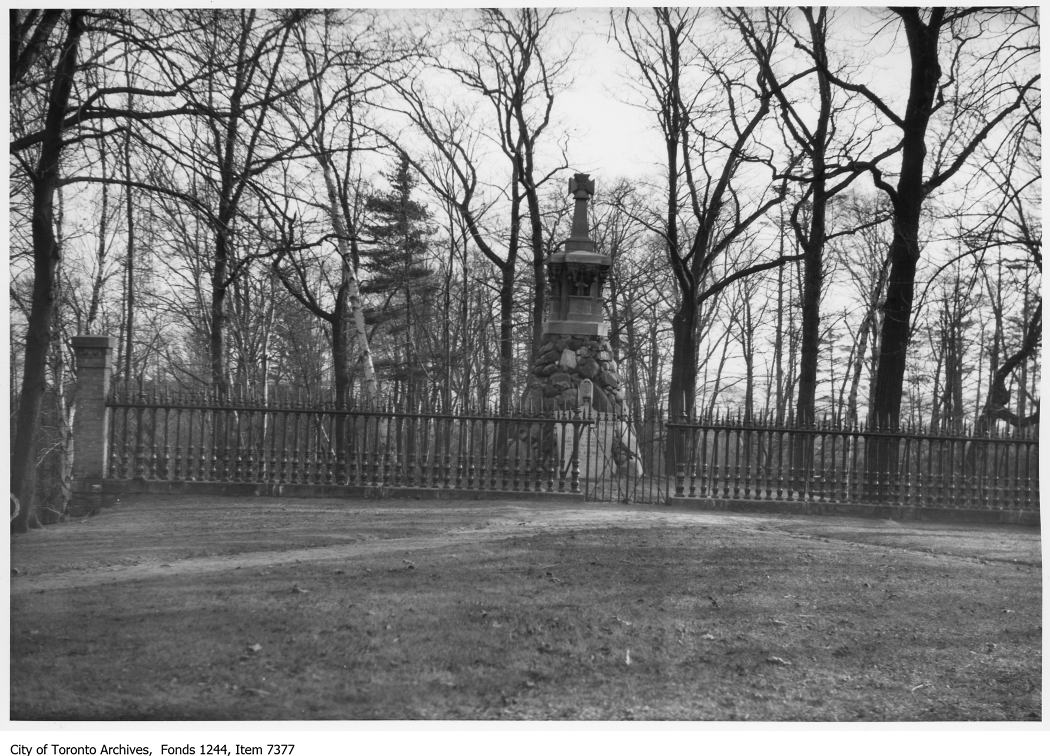 (Both photos are also on the ornamental gates and fences page.)

Then we head Downtown in 1954 to a window display of Bata shoes in time for Easter, at 239 Yonge Street: 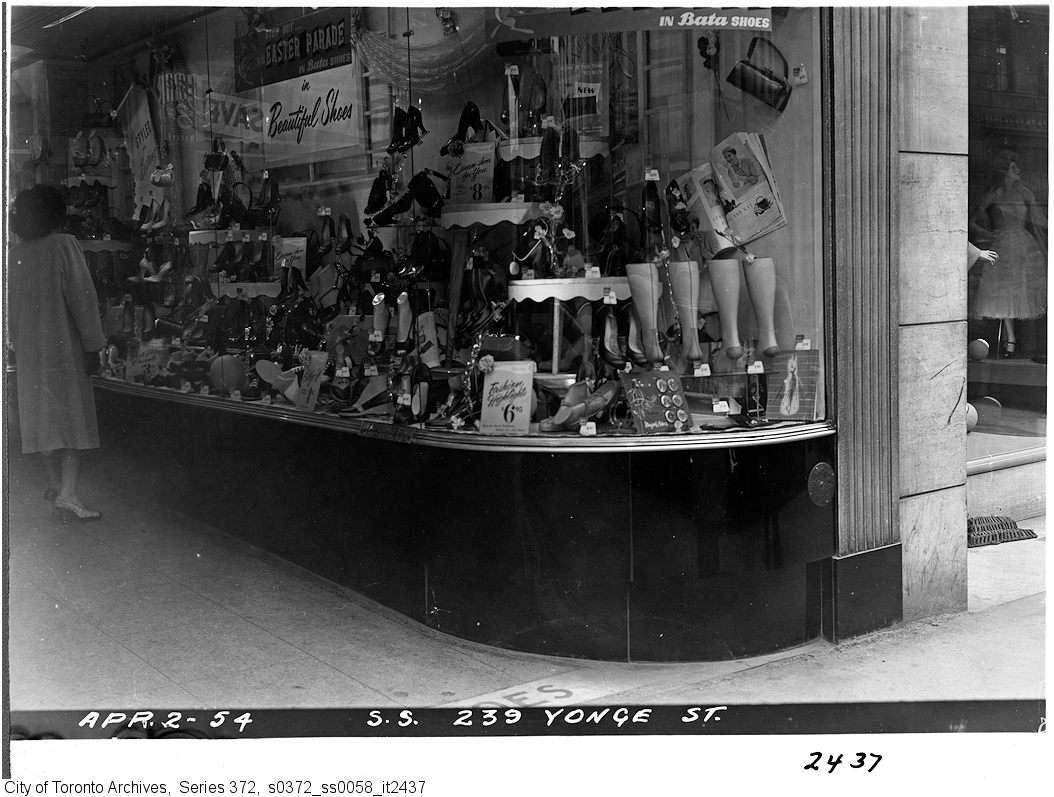 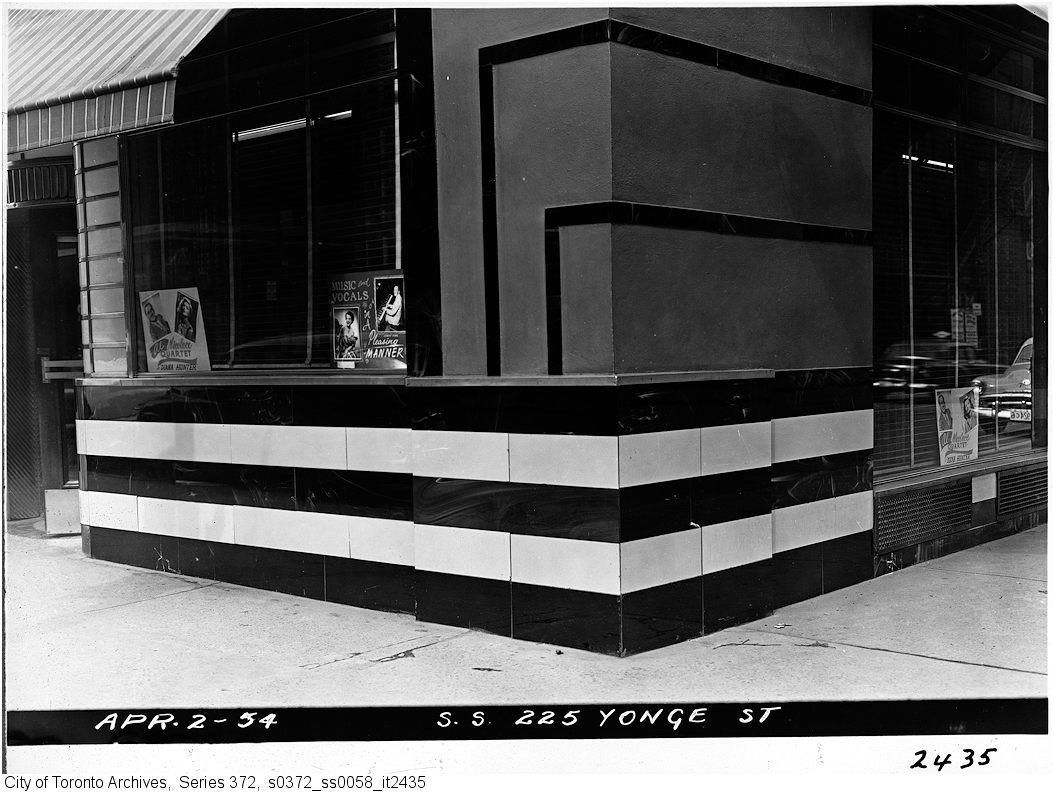 
The problem noted in my last post has manifested itself with the above photo,

in that even though the address is correct, The Silver Rail Tavern is located on

the n/e corner of Yonge at Shuter Street, not the s/s; there also being

no s/s to Yonge Street.

The problem noted in my last post has manifested itself with the above photo...
Click to expand...


Indeed! I didn't even realize it was the Silver Rail, so I'm not making any judgements....

One photo from back in 1917 of the steelwork frame under construction at Union Station. 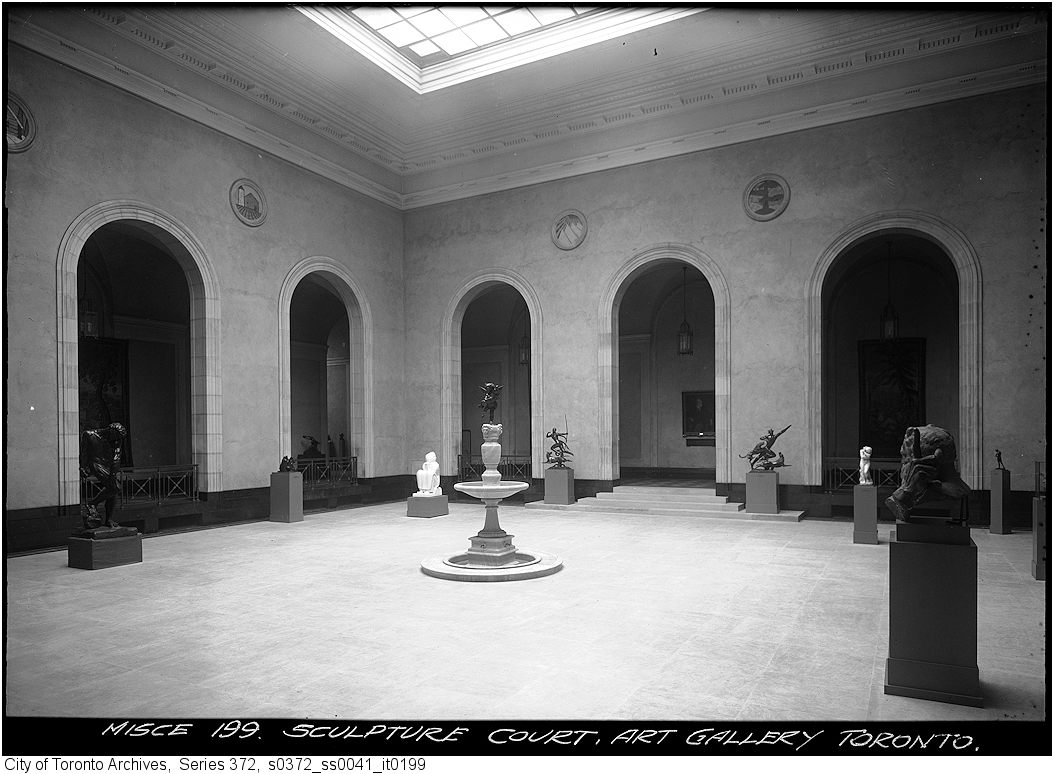 "Indeed! I didn't even realize it was the Silver Rail, . . ." QUOTE seemsartless. (aka Quicksilver - LOL)

Herein lies the rub; there will come a tyme when one searches The Ontario/Toronto Archives ,

how will they be assured of tyme/place when mistakes as to same are/maybe frequent?

I have mentioned this to my friend George Flie on occasion, with his agreement.

I will speak with him again; this present however, it will develop into one of major import

the longer it is allowed to continue.