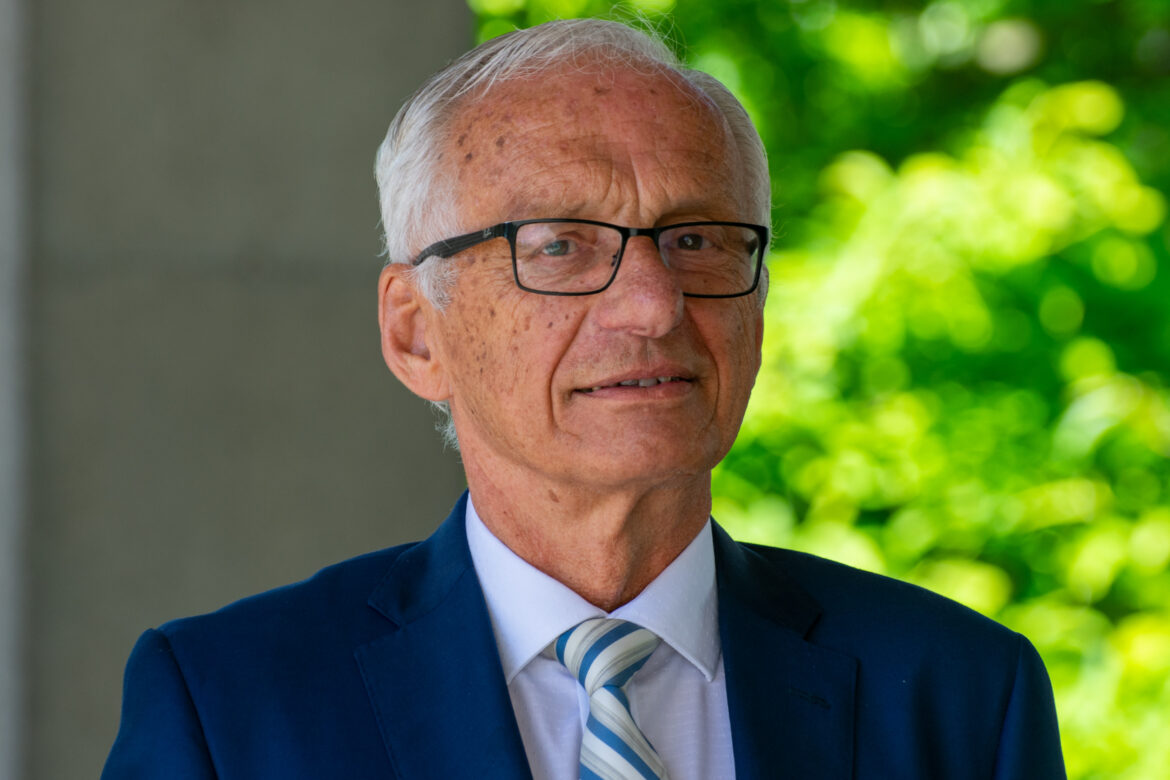 COLEMAN: The Bratina People Love is Running For Mayor

Bratina is being friendly, personable, and taking the high road in the early days of his mayoral run.

COLEMAN: The Bratina People Love is Running For Mayor

Bratina is being friendly, personable, and taking the high road in the early days of his mayoral run.

I hope Andrea wipes the floor with this clown.
A

My favorite part of the article above:

Bratina’s unhealthy ego may be his fatal flaw. His temper flares up when his ego is bruised. It’s been widely written that Bratina is “thin-skinned.”

Over 15 years ago, in what a Spec reporter described as a “meltdown,” Bratina threw a pen across the Council Chamber. Bratina blames then-Mayor Fred Eisenberger, and complains about TheSpec’s reporting. The incident continues to be cited to this day.

Towered said:
I hope Andrea wipes the floor with this clown.
Click to expand...

Or Keanin Loomis who is also pro-LRT.

Based on my knowledge, I kinda prefer Keanin as someone who's been successful unifying local cons + local libs + local ndp. I prefer a politics-unifier mayor, personally. If you look at his tweets, he's a moderate-progressive style in action speak.

(After all, he did kick @fordnation out of the Chamber when LRT was cancelled, but IIRC welcomed back some of the constituents when it was resurrected. Go figure)

My business has been part of the Hamilton Chamber of Commerce, and was able to see Keanin in action successfully negotiating agreements in today's uber-polarized world. That is a cargo starship's full of cred to me.

Horwarth, while I'm a progressive myself, I worry about polarized/populist moves that turn other voters away from her, I wonder what the polling (Keanin vs Horwarth) looks like. I could be persuaded either way.

Historically I've voted almost all Canadian party colors except blue -- neither a hardcore Liberal nor a hardcore NDP -- those who are close to me know me already on my leaning-progressive moderate-left stance but willing to politely have coffee/apple pie with moderate con neighbours. I'm not for populist or polarized politics, ala the 5-letter curseword that became US prez in 2016 -- and even my Canadian cons friends are aghast.

I wish there was more diplomacy between red and blue, like there was during my younger years. So that's why I am kind of leaning Keanin, just because (as a Canadian Business who has been a Hamilton Chamber member) of actually witnessing his deal-making abilities between the sides, in a far less polarized manner than many others.

Hopefully municipal politics don't get as dirty as higher-level governments are -- it's getting there -- even the dumpster fire shaped building we call Hamilton City Hall.is a beacon of responsibility compared to what I witnessed many other city halls (e.g. in several USA cities) become. You don't want to know.

You've heard of Keanin's housing promises. I do have some concerns about some potentially misdirected housing policies (possible sprawl quid-pro-quo vs LRT corridor densification), but this is a very legitimate area of concern for Hamilton to add more affordable housing -- but I know he has been pro-densification too, even if I'm not too gung-ho about his willingness to trade a little of what I don't want for some concurrent of stuff I want. But if he can pull off an agreement from a blue province and a progressive parliament, to get some funding for housing (especially permanent rent-affordable housing too, in conjunction), I could certainly be wooed over. Just don't expand the Urban Boundary, when converting fair-game mountain brownfields to townhomes.

And you've even heard of Loomis' road promises. The war cry of "FIX-THE-ROADS" 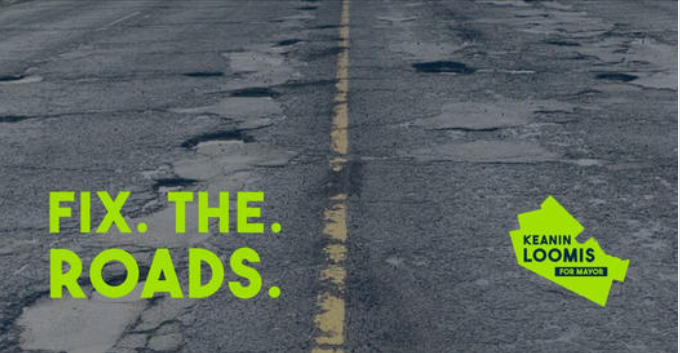 See... fair game unifying.
That's a unifier if he appeals to both road drivers (who hate LRT) and transit-upgrade fans (Loomis is #yesLRT).and developers (build new housing). We need excellent upgraded roads to handle the detour traffic (both buses and cars and bikes), and part of the LRT fund includes road spending (new York car lane, new Longwood bridge, new Frid St extension, etc), so he can play that message to calm the #noLRT-#yesLRT divide.

Deal-making is going to be important for the LRT to happen successfully, and more likely to curry backroom calm-downs necessary to prevent LRT cancellation games at the provincial level ("Too bad, we're cancelling all Ontario transit funding" type of actions), especially if Feds level go more populist than Ontario in the next Fed election (heaven forbid).

Regardless, I agree with Allandale25, I have a gut feeling Keanin is indeed a net positive. Not much "outsider candidate" choice unfortunately. He's got my vote over Horwarth (at the moment) unless Horwarth can bring some more unifier magic pixie powder to the table. It's still early, mind you. But Horwarth is far better than The Brat(ina). You win some, you lose some with your vote -- and abstainment shouldn't be an option in this election if you're a resident of Hamilton.

Regardless, I will take any #yesLRT mayor for Hamilton! Either brings lots of good to the table.

I hope there's not too much vote-splitting.

I don't remember along the LRT route, but there's an incomplete log cabin on Barton 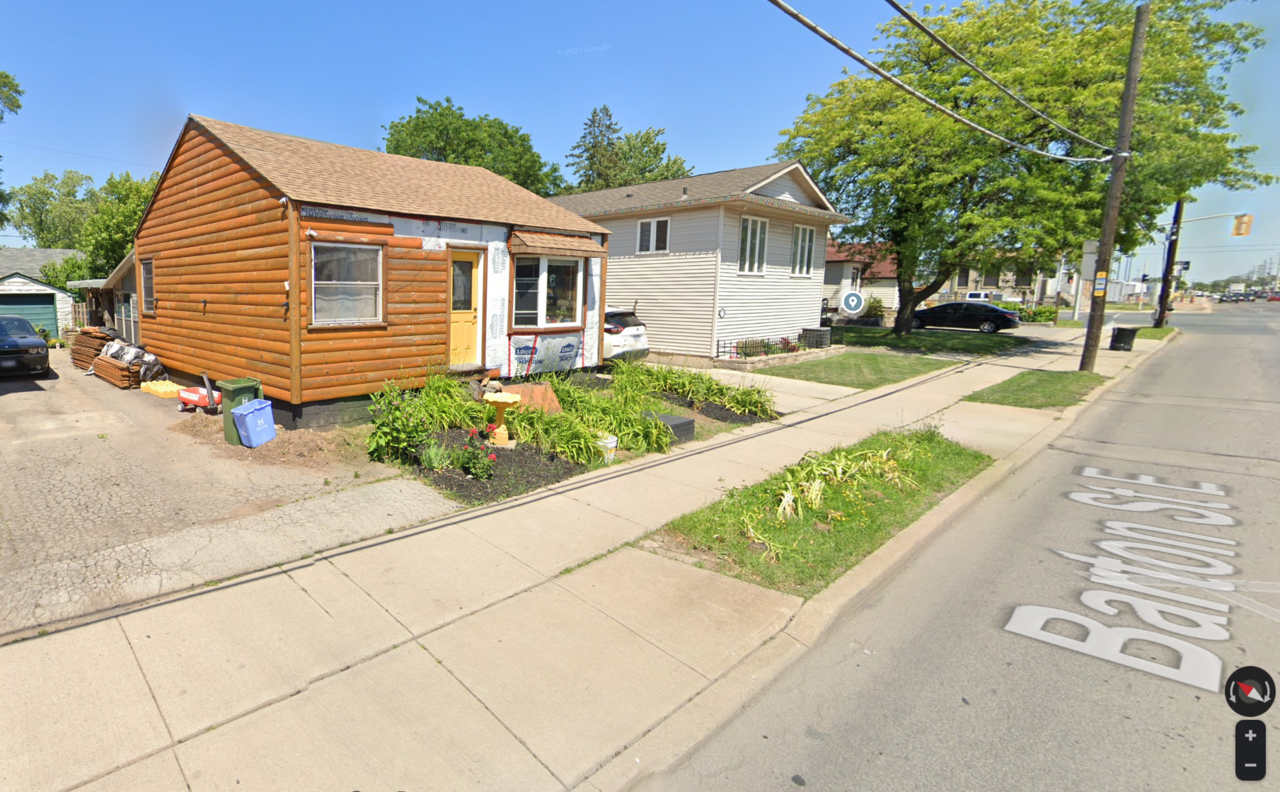 Side story: This is now an infamous Hamilton Barton Ward 4 landmark in that community, because it's been incomplete for a few years. For some reason, their construction stopped a few years ago, maybe they ran out of compatible logs, or funding, or had a contractor dispute. I don't know the background story, but I (and most) always notice when passing by. The incomplete nature makes this landmark at 1775 Barton instantly noticeable. If it's still incomplete by 2031, the community will have to register it in the Registrar of Historical Landmarks, denoting the famously Perpetually Incomplete Log Cabin.
Last edited: Aug 4, 2022
-- Follow @MDRejhon on twitter

Hamilton deserves better! Elect me mayor, and I'll make sure that log cabin gets finished.
I'm a bus.

mikeydale007 said:
Hamilton deserves better! Elect me mayor, and I'll make sure that log cabin gets finished.
Click to expand...

Welllllllll....
It's not too late to register as a candidate for the Hamilton Municipal Election.

Anyway, speaking of which, there's been a sudden flurry of campaigning starting up, at least in online advertising. At least if you're in the Hamilton geographical region.

Fortunately I am not seeing these 2018 campaign signs during 2022. 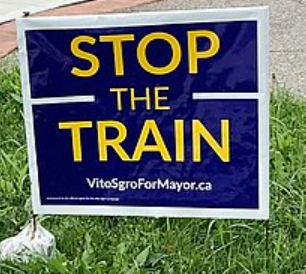 Although, I wonder what The Brat(ina) will be up to. He seems to be holding his campaign weapon cards close his chest at the moment.
-- Follow @MDRejhon on twitter

They've really started from the very beginning again haven't they.

^ Surely they can use some of the existing information.
R

Allandale25 said:
^ Surely they can use some of the existing information.
Click to expand...

It's been a year since Hamilton council ratified relaunch of the project and Metrolinx is just now hiring the consultant to help prepare the bid. Elections delay closing tenders but they don't really impact creating new ones, particularly when the main opposition is also in favour of the project.

I don't doubt they can reuse the pieces but it doesn't seem to be saving much time.

The Hamilton LRT procurement seems to be split into two main packages from what we’ve heard. The first is the utility relocations, which while being a massive project, is rather straight forward with tons of potential bidders, and is the easiest contract to get out the door. The actual LRT build is more complex, and that tender might take more time.

What I‘m really interested in is the rolling stock. The original contract had the winning consortium supplying the trains, not Metrolinx like on Finch, Eglinton, and Hurontario. If it is up to the winner again, it would be cool to get something new for the line.

LRT came up in the Mayoral debate tonight. 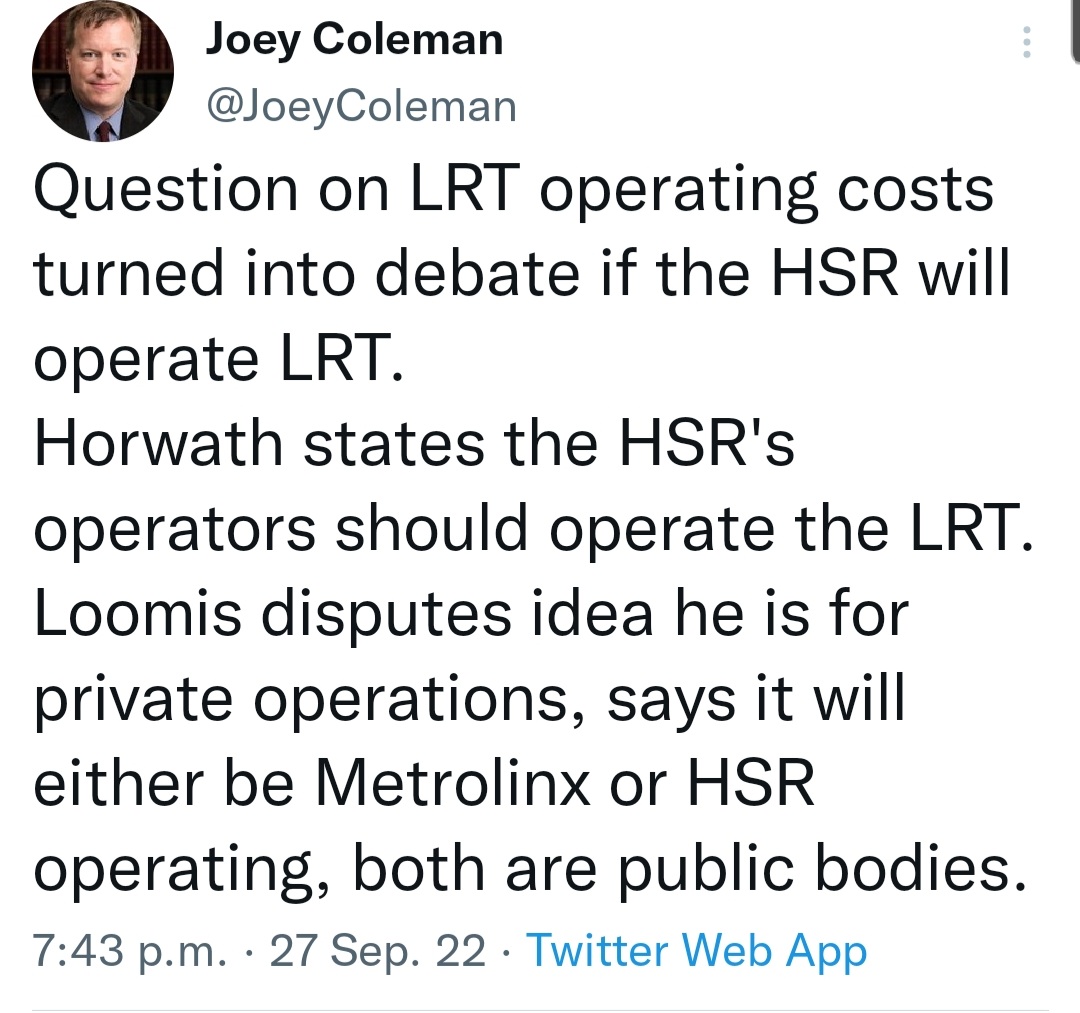 The thing is if Metrolinx "operated" the Hamilton LRT there's a 0 percent chance it would actually be them operating it. It would be outsourced to an outside company, but nice try Mr.Loomis.