Krypto98 said:
would be really funny if this sign was put up in St Mary and StratfordView attachment 355251
Click to expand...

smallspy said:
Once the signalling system is complete, trains will be allowed to run at 60mph within the USRC from its outer limits to the ladders, 25mph diverging on the ladders and 45mph on the straights until they reach the trainshed.
Click to expand...

I thought the plan had been to upgrade the ladders themselves, first to 30 mph, and then to 45 mph. (or was it 45 km/hr ... though this was posted here some years ago now).
S

innsertnamehere said:
When's the signaling upgrades planned to be completed again? 2022 right? The combined time savings impact on travel times will be massive as it will effect literally 90% of GO customers. From what I recall it's supposed to cut travel times by about 2 minutes on LSW/Milton/Kitchener/Barrie trains and ~3 minutes on Richmond Hill/LSE trains, right?
Click to expand...

The first stage of the cut-over - the Cherry Tower - was supposed to be November of last year. But obviously that didn't happen.

At this point, I have no clue as to when it is all scheduled to occur. They're still installing new signals and running wires, so I suspect that it's some time away.

There will be time savings, but the real improvements will be in the capacity to the system.


nfitz said:
I thought the plan had been to upgrade the ladders themselves, first to 30 mph, and then to 45 mph. (or was it 45 km/hr ... though this was posted here some years ago now).
Click to expand...

The ladders all had their hardware - tracks, switch machines, etc. - upgraded several years ago.

The issue now is that the signal system to protect and operate them needs to be completed, and until that happens, it says as status quo.

ARG1 said:
We have told you why to take the train, to get to Kitchener at around 7:30, before many jobs startup around there. If you refuse to listen what people tell you, why are you here?

Also GO commuter rail lines leaving the city in the morning? They do: See early morning train service to Kitchener and Barrie.
Click to expand...

I agree with the general point, but just want to note that these cities are not nearly as far as London. Even Peterborough is closer.
U

denfromoakvillemilton said:
I agree with the general point, but just want to note that these cities are not nearly as far as London. Even Peterborough is closer.
Click to expand...

Agreed, but it's also worth noting that London-Kitchener is slightly shorter (94 km) than Kitchener-Toronto (101 km) and quite a bit shorter than Niagara Falls-Toronto (132 km) - or (since you just mentioned it) Peterborough-Toronto (124 km)...

Another thing with Peterborough vs. London: Peterborough is a) significantly smaller than London. And b) there is NOTHING between Peterborough and Toronto. The Peterborough Line is something I never see happening. Compared to London-Kitchener which has some people along it. Not a massive amount, but enough to make it morw worthwhile.

Nomad_87 said:
Another thing with Peterborough vs. London: Peterborough is a) significantly smaller than London. And b) there is NOTHING between Peterborough and Toronto. The Peterborough Line is something I never see happening. Compared to London-Kitchener which has some people along it. Not a massive amount, but enough to make it morw worthwhile.
Click to expand...

Two worlds collided Thursday morning (July 8) in Peterborough as the future of passenger rail service in southern Ontario was unveiled at the site of one of the Ontario’s most historic Canadian Pacific rail stations.

With completion of the project forecasted for 2030, and with $500 million already set aside in the federal budget for the early stages of the procurement process, the HFR line will feature stops at a number of communities along the corridor, Peterborough among them.
Click to expand...

As a project that has been considered, reviewed, reconsidered, lobbied for and outright promised for years, there’s now a light at the end of the train tunnel.

Being done in conjunction with VIA Rail — the passenger rail service’s president and CEO Cynthia Garneau was also on hand — the project represents the largest transportation infrastructure initiative undertaken in Canada in decades.

The new dedicated rail line will result in shorter travel times and faster trains that will reduce average trip times significantly. For example, as much as 90 minutes will be shaved off the average Toronto-to-Ottawa trip.
Click to expand...

The dedicated passenger rail track would allow for train speeds in the 177 to 200 kilometres per hour range.

Other benefits include more reliable on-time performance (up to 95 per cent from the current average of 67 per cent), more direct routes with improved connectivity between communities as well as to other modes of transportation, and new rail service for a number of communities including Peterborough.

The procurement process for the project begins this fall. That will include engaging Indigenous groups and communities for feedback, working with the private sector to determine capacity as well to gather opinions on the best possible delivery model, and starting a dialogue with partner rail companies to negotiate for dedicated routes both in and out of communities situated along the corridor.
Click to expand...

“A phased approach will help ensure the success of this project,” said Minister Alghabra.

“A significant amount of work has been done since 2016. We’ve been working closely with VIA Rail and the Canada Infrastructure Bank to make progress in the design and planning stages. Our government plans to select a delivery model prior to the request for proposals that will launch this fall. We want more reliable and cleaner travel options for Canadians and we want it to be done right.”

In her remarks, MP Monsef echoed that, crediting “leaders in Peterborough-Kawartha who believed this was the right thing to do for our community — who brought others along and did the due diligence. This moment, this celebration, is for you.”

Mayor Therrien, meanwhile, shared that her mom told her stories about taking the train to Peterborough when she was a kid.
Click to expand...

“This project has been talked about and studied … to know that things are moving forward is exciting,” Therrien said. “I know we still have decisions to make, like where the new station is going to go — this spot (the historic CPR station that houses the Peterborough Chamber of Commerce) looks pretty great to me — but that’s to be decided.”

Afterwards, Therrien talked about the impact the new passenger rail service will have on the city.

“We know we’re trying to move people out of their cars as much as possible, so any form of public transportation is a good thing.”

As for the location of a new train station, Therrien said the downtown is her preference.

“Historically, there was a reason this stop was downtown. That would really be a boon to our economy.”

An interested observer of the announcement, who was acknowledged for his behind-the-scenes work lobbying for passenger rail service to the region, was Havelock-Belmont-Methuen Mayor Jim Martin.

“We’re hoping we’re going to be a part of it … we have almost 100 acres right in the middle of town (Havelock) that’s all rail yard,” Mayor Martin noted.

“Whether it’s cleaning the trains or servicing them, and also perhaps a (train) stop, Havelock is a railway town. A lot of things have changed but it’s kind of coming back. Maryam (MP Monsef) has kept things rolling, as did (former Peterborough-Kawartha MP) Dean Del Mastro in the past. It’s my hope that we remain in the conversation.”
Click to expand...

Hosting the announcement was Peterborough Chamber of Commerce president and CEO Stu Harrison, who has also been a key player in the lobbying process for a return of passenger rail service to the region. He noted there’s another local benefit to the service.

“There’s a significant amount of freight business that comes through this area,” Harrison pointed out. “But it’s a 10-kilometre-per-hour speed limit all the way into Toronto — a 16-hour trip.”

With passenger trains using the HFR line during the day, freight trains could run on the line at night.

“That freight would now be allowed to run at night at dramatically faster speeds,” he explained. “That’s going to be transformative. It will literally save freight service in this area and save us putting a lot of trucks on the road if we lost the line.”
Click to expand...

The difference with VIA HFR and a potential GO line is Peterborough in the case of HFR just so happens to be on the way to Ottawa and Montreal. A GO Line would most certainly go no further east than Peterborough.
Last edited: Oct 15, 2021

Well technically that's only 8 years away, which is not bad. What where you expecting?
Probably get cancelled before it's finished.
U

The article said "With completion of the project forecasted for 2030 ... ", which seems to suggest that service to Peterborough (which we all expect to be in an earlier stage than, say, Montreal-Quebec) could commence before that...
A

Urban Sky said:
Agreed, but it's also worth noting that London-Kitchener is slightly shorter (94 km) than Kitchener-Toronto (101 km) and quite a bit shorter than Niagara Falls-Toronto (132 km) - or (since you just mentioned it) Peterborough-Toronto (124 km)...
Click to expand...

Funnily enough Belleville is about the same distance as London is to Toronto. I dreamed of a GO line going to maybe Coburg one day which would honestly be reasonable in the future so to see Belleville or even a long stretch, but Kingston in the mix wouldn't be as surprising anymore. Thankfully there is more than enough decent Via service going to those places and that's all we need for now.
B

anb said:
but Kingston in the mix wouldn't be as surprising anymore.
Click to expand...

Assuming HFR it might actually make sense IMO. There's a hell of a lot more demand on the Toronto - Kingston corridor than Kingston - Ottawa and Kingston - Montreal. Much as a I keep saying about London, something provincially driven starts to look like a reasonable approach if VIA is focusing on the end to end passengers and on a different corridor at that. 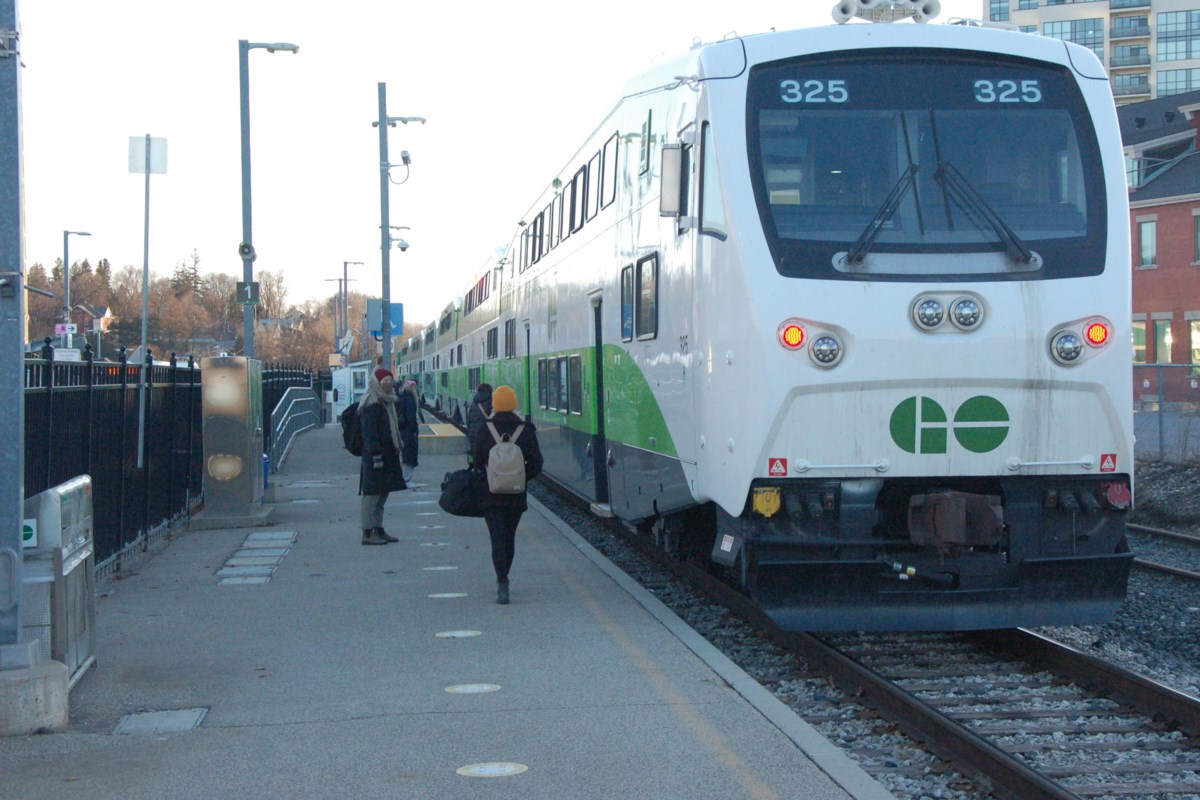 GO train speeds to more than quadruple through Guelph

It will take longer now that we are going to electrify the line. I thought that would be pretty obvious. Electrification is way more work than just laying down new trackbed and tracks.

The Liberals opting to go with Electrification from the outset was actually a bit of a false flag to defer the project to a later date. Its pretty clever. Get all the HSR and Enviro people on board, and instead of building a diesel service that could be done by 2025, and then adding electrification in 2035, they get to push the whole project back 5 more years.