GO Transit Fleet Equipment and other

RS3488 said:
Can GO even become driverless? I thought with heavy rail trains you couldn’t have driverless operations.
Click to expand...

In 2050? Absolutely. Any tech that can drive a car, truck, or bus through crowded streets (manufacturing is largely the issue for Cruise and Waymo now, not the tech itself) will be able to safely drive a passenger train too. A combination of lidars/cameras on the train, at level crossings, and moving block signalling will enable it.

The current ~185 level crossings will be mostly grade separated by that point as well.
Last edited: Aug 1, 2022
T

IIRC, driverless train tech was tested out in Australia (mining). The company said there is no point as the labour cost for their trains was negligible compared to the total cost of running the train.
C

TRONto said:
IIRC, driverless train tech was tested out in Australia (mining). The company said there is no point as the labour cost for their trains was negligible compared to the total cost of running the train.
Click to expand...

This does not mean that their people are "driving" the trains. The Australian ore trains are highly automated.

Our railways are pretty close to that already, between PTC and the onboard "Trip Optimiser" technology..

Similar to AV's, these technologies work well 80% of the time and horribly the rest of the time. But by 2050.... that may be old hat. And by 2050, the GO network will look an awful like the TTC subway network, where driverless trains are already effectively in operation.

So Alstom is the rolling stock partner and they won't be able to sell any of their fancy EMUs, right...

It would make so much sense to just STOP buying any additional bi-levels, and start phasing in EMUs.
C

LemonCondo said:
So Alstom is the rolling stock partner and they won't be able to sell any of their fancy EMUs, right...

It would make so much sense to just STOP buying any additional bi-levels, and start phasing in EMUs.
Click to expand...

Or maybe it doesn’t. It’s quite the spreadsheet exercise to balance out the life expectancy of the existing fleet, the lifetimes costs and savings of introducing an EMU fleet, and the fleet size required given a future state that may have a different mix of heavy-load peak service trains versus 24x7 service.
One has to assume that some use of EMU’s will be attractive, but whether that accelerates the retirement of some bilevels or whether both EMUs and standard coaches will need to be acquired is a number-crunching exercise . If the peak never returns to its previous level, there may be a surplus in available coaches with useful years of service remaining. Deferring introduction of EMUs until that surplus is gone might be the cheaper scenario - and the game is all about delivering at lowest cost over a very long contract term.

My theory is that when MX eventually moves over to EMUs, they’ll want to use single level EMUs, which is why rn they aren’t switching to EMUs.

Considering how the GO system will be more like the TTC network by 2045-2050, double decker trains would only makes things less efficient. So they keep the BiLevels and have the electric locomotives for now, and then move over to single level EMUs when the time arrives. This negates the need of having to replace the BiLevels with double decker EMUs that’ll eventually get replaced by single level EMUs.

In what way would it be more efficient to have single deck trains?
L

T3G said:
In what way would it be more efficient to have single deck trains?
Click to expand...

Takes less time for boarding, getting up and down stairs.
R

T3G said:
In what way would it be more efficient to have single deck trains?
Click to expand...

With single level trains, more doors can be placed on the cars, which reduces the dwell time at stations and allow 3-8 min peak frequencies to be achieved more easily, especially with added infield stations.

I don't personally see this as a selling point at the frequencies at which GO electrification is proposed to run initially (15 minutes). Maybe if we were talking about reaching the 6-10 minute frequencies that have been discussed, but this comes with its own set of issues. I can't imagine 6-10 minute frequencies running out to Barrie, Kitchener, or London. Will there be sufficient capacities on the single deck EMU trains to accommodate inner city passengers as well as long distance travellers? It's important to keep in mind that a lot of these ideas are not yet funded, and given the volatile nature of Toronto transit planning I'm not sure it would be wise to put anything in stone. It is my understanding that the most recent promotional materials from Metrolinx have only advertised the 15 minute frequencies, and higher ones are a subject of debate and controversy. Hopefully we don't find ourselves in a situation where we've replaced our double deck coaching stock with single deck coaching stock, but find our service is inadequate and the train cars are no good for the amount of demand there is, while the BiLevels may have performed better. Better to have them, and not need them, than to need them, and not have them.

As for the added infield stations, none of them seem to be exceptionally close together.

As a comparison, here are some choice station to station segments on Paris' RER, which runs trains more frequently (every few minutes in the rush hour), and uses double deckers on many services.

It is true that Paris' stock has 3 doors on the side, which will decrease dwell times somewhat, but at proposed frequencies of 15 minutes, it is going to be extremely easy to pad the schedules to deal with the reality of our rolling stock.
U

cplchanb said:
That's push pull operation. Emus is where you have electric motors on multiple cars along the consist hence its name
Click to expand...

It’s the difference between concentrated motor vs distributed motor operations.

Strict definition of a multiple unit is a fixed set-up of motor and trailer units capable of bi-direction operation. Even though it’s popular to categorize EMUs as distributed motor units with some self propelled carriages.

But just to poke fun at things I will category our future go train as the following. If you look at it, it not so different from the old Eurostars or TGV 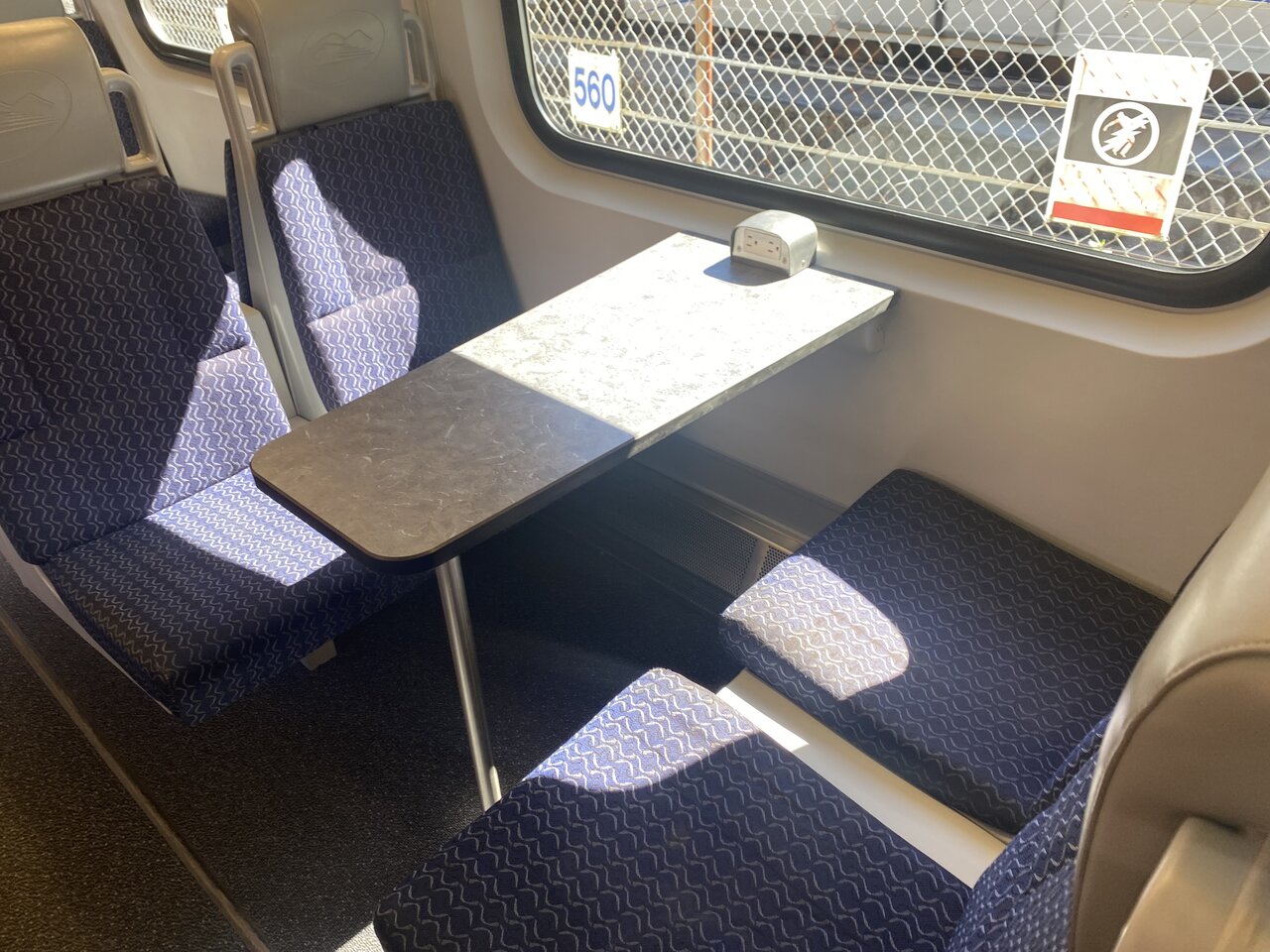 Currently in Vancouver on vacation. the west cost express gets tables but GO doesn’t

Tables at 2-4 4 seat sections would be nice. Especially for the longer distance runs to Niagara Falls and London.

Tables at 2-4 4 seat sections would be nice. Especially for the longer distance runs to Niagara Falls and London.
Click to expand...

GO had tables at one point I think.
L

I remember tables on the train to the falls. Unless I misremembered.

I have been saying since 2007 that GO needs a number of different types of train sets as well the length of them.

My trip to Europe in 2010 reinforced my views and were reinforced again this year.

Every system I saw had both single and double deck trains that range from 2 cars to 20 cars. Most where duel ends with power at both end, power one end with cab car at the other end along with DMU's. Some trains were made up with 2-4 sets of 3 car EMU with power at each ends of the 3 cars set or 2 sets of 5 cars sets. High speed trains work this way as well, but that is another story. Even saw a single and DD cars part of one train with a locomotive at one end.

Some trains that were both single and double deck ran like GO current system as well with power at both ends. Mostly on 8-12 car trains.

We were forced to take other routes to get to are next place to visit as all trains were sold out on the day we were to travel weeks and months in advance in place of waiting 2-4 days for a train. What took place on these trains again reinforced the idea of one train becoming 2 or 3 trains going from A-Z as well another train hooking onto ours going to our station.

We left Copenhagen as one train and became 2 trains part way. My section carry on while the other section when elsewhere in the opposite direction before we departed. This new train became 2 more trains when we had to transfer to an RER train bound for Hamburg. The section we were on became a 2 car DMU going one way while the other 3 car became an EMU going in the opposite direction. The train was single level.

What got me was the fact that a gangway between cars were larger than normal and found out about 10 minutes before our transfer to an RER station why. That gangway became cab control ends that folded out from the side that were lock in place by the train conductor. As the train was to stop at the station, the conductor broke the connect between the 2 cabs and ended up 10 feet apart.

Haft way to Hamburg on the RER, our 5 car EMU took a bang at a station that indicated to me that another train just attached to ours. In Hamburg, we were a 10 car EMU DD train. Again, this train split in 2 with each going in opposite direction and not the only one I saw doing this. Joining trains together was done in route to free up access for more trains to the station at the same time.

Very common to see 2 trains on the same track at the same tome going in opposite direction as well arriving the same way. Something ML has looked at, but gone a different route these days. A few other systems were doing this as well.

If I look at a NF train, it could be duel power one end with 3 cars and attach to another train in Hamilton that would join an EMU in Burlington to become say a 12 cars or less to Toronto.