And Metrolinx used an image from Cooksville GO for the Old Cummer GO work.
C

Please don't judge, termites need to work too in this economy.

Some of the construction at Weston Station. 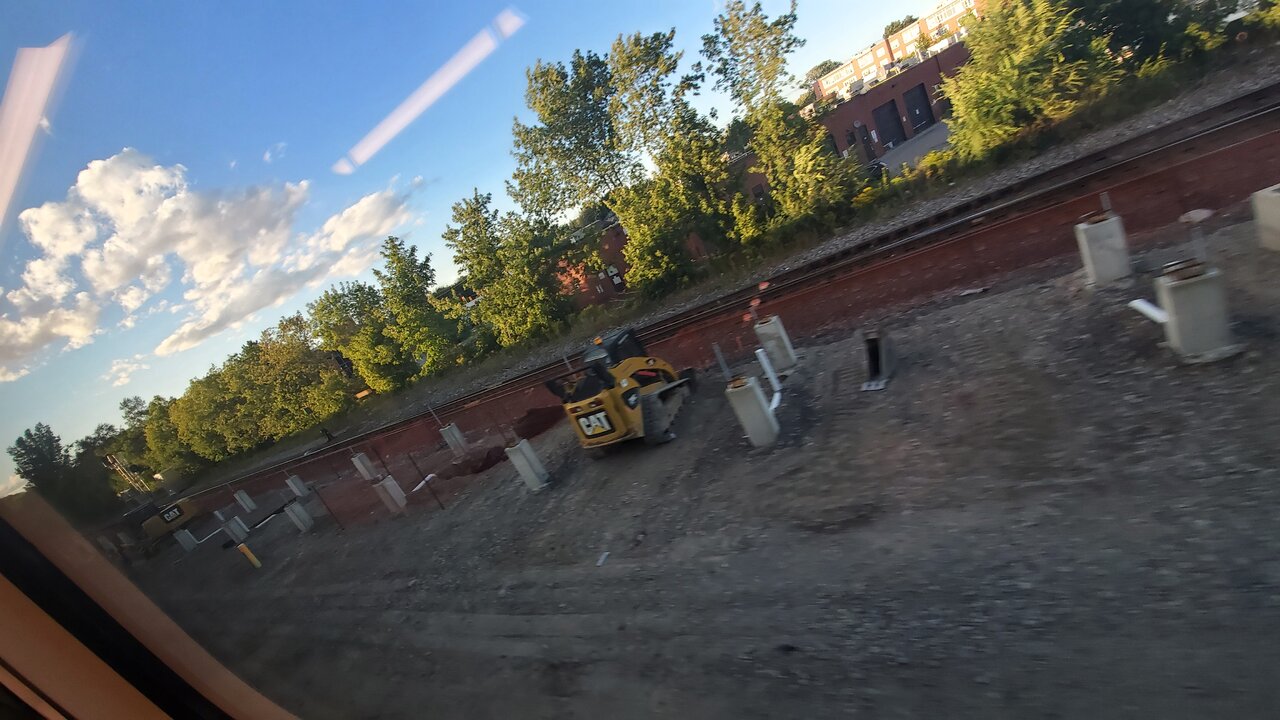 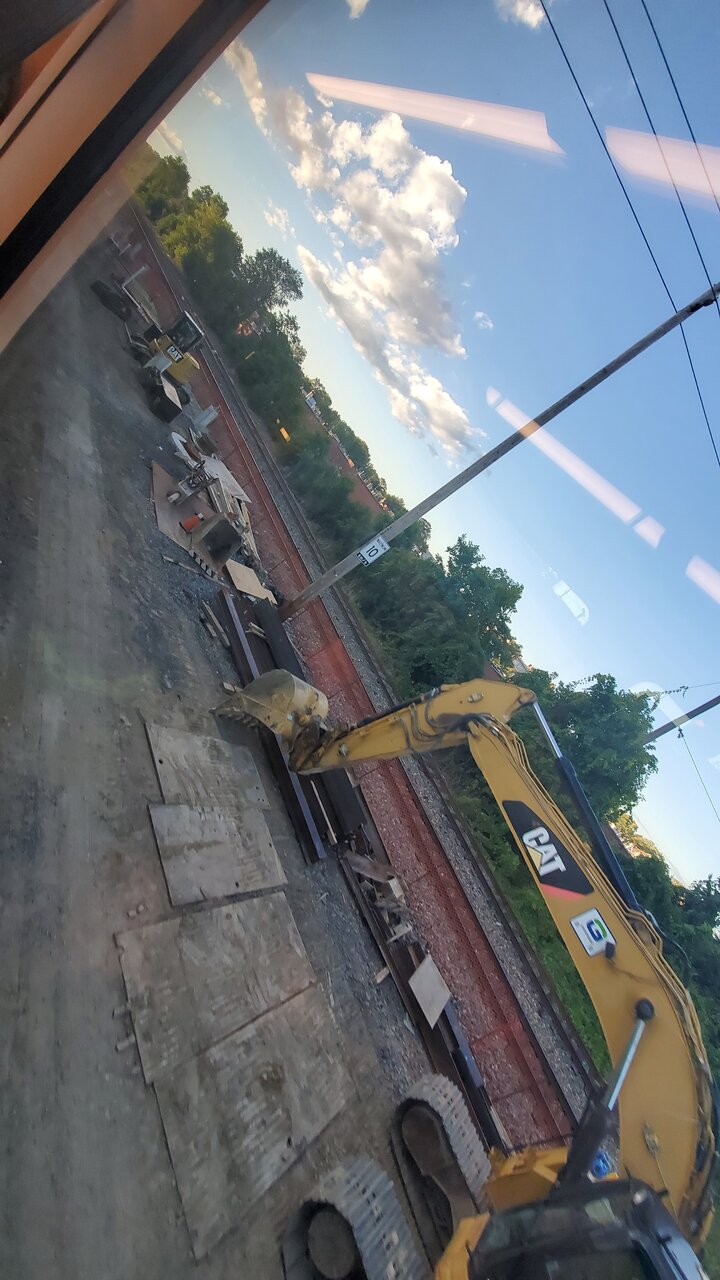 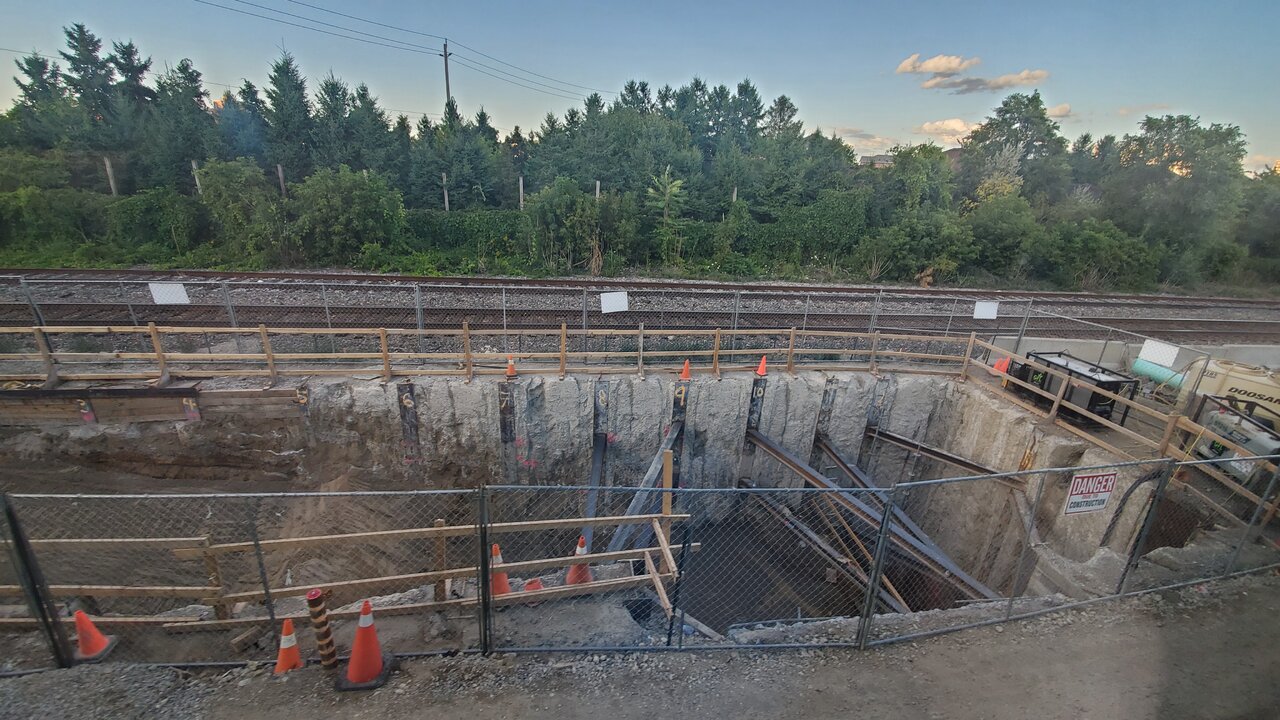 Today, I saw some track work on the Richmond Hill line south of Dundas St at Bayview Avenue. As previously discussed regarding the Don Valley Go facility this might be connected to it. The second tracks seems to be reinstated. Also the first track is getting new ballast.

Does someone know more about it? 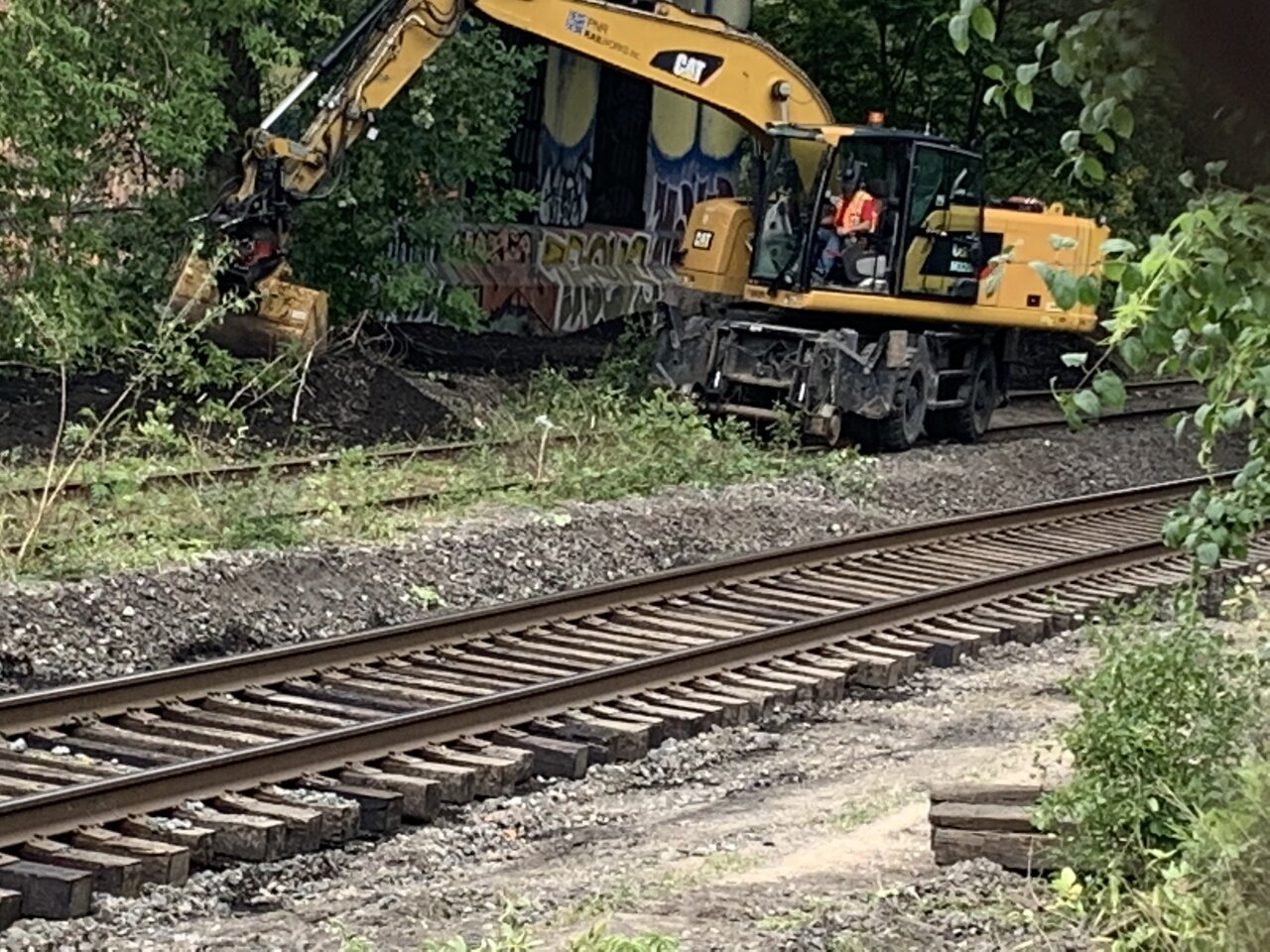 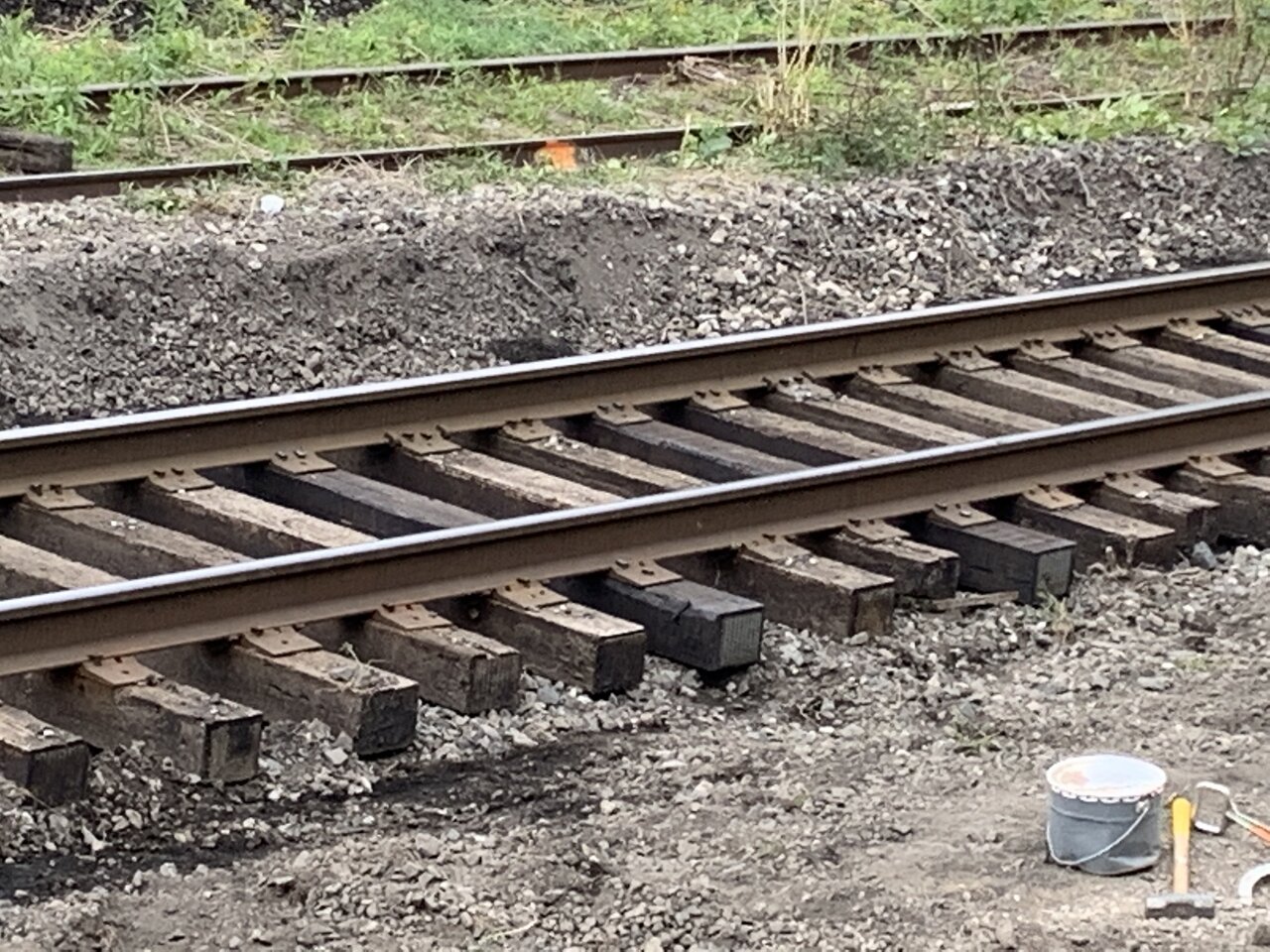 Allandale25 said:
Interesting re A10 on the map. I hadn't realized this when seeing the PDF: " Metrolinx spokesperson Anne Marie Aikins said the agency has already revised its original proposal in response to public concerns, including by relocating the layover site from a part of the valley south of the viaduct, which the city deemed environmentally sensitive. It has also reduced the number of tracks required from three to one." (emphasis added)

The article does't mention it's using an existing (but not actively used) rail corridor. “We’ve done enough ecological damage to the Don Valley,” said Floyd Ruskin of the group Don’t Mess With the Don, over Metrolinx’s plans for a new GO l...

Really don't know why more aren't concerned with the disruption of heritage and sightlines for the Viaduct. Go nuts upgrading the Belleville sub, that's a long time coming. But putting a couple buildings and parking lot below one of the city's few prized bits of civic infrastructure? It's a photographic mecca.

And (maybe I'm wrong) but I thought we're in the drawn out process of putting in a light display on the girders of the viaduct to accompany the illuminated luminous veil. How's that going to look when below it will be a parking lot, nondescript buildings, and chainlink fencing illuminated by their own industrial lighting?
C

^If that work is at Dundas, the mainline track is the ex-CN Bala Sub, ie the GO Richmond Hill line. Looks like just routine track maintenance....track looks to have been undercut, and some ties replaced. (tie replacement tends to be a 1-in-so-many proposition). After reballasting, the track may end up a few inches higher. That line is only single track at that point, the Rosedale siding ends further north at Gerrard.

The second track which is lost in the weeds is the ex-CP Belleville Sub. - the line that was supposedly railbanked for Peterboro GO, HFR, etc. Looks like it is being grubbed as a preliminary to being used again for GO layovers. If so, I would predict that thevtrack gets torn out altogether and replaced in whole.

Apart from the esthetic values, I’m a bit shocked that ML pulled the switcheroo about the future usage of this line. Suddenly VIA is talking about using the Stouffville line through Kennedy, GO is serious about a flyover at Scarborough Jct, , GO cancels its plan to triple track east of Guildwood......the conspiracy theorist in me wants to connect the dots. I wonder what agreements might have been reached.

I was thinking the other day:

The electrification of Union and that corridor is going to be a LOT of work. Simply because of the complexity and how busy the corridor is.

I was thinking that Metrolinx should do an electrification pilot project on the Stouffville Line, from Kennedy to Unionville.

The entire thing is soon to be double tracked, and since they own the corridor and its quite relatively simple compared to the rest of the network, they could have it up and running quite quickly. A storage yard would have to be built at Unionville, but I think that would be a nice-to-have anyways.

Then buy or lease some potential EMU's and run a subway-like all day service every 10-15 minutes from Kennedy to Unionville, obviously allowing the bilevels through during rush hour to union.

People could for now transfer to the Line 2 subway at Kennedy to continue downtown during off peak.

What do you think? I think it would both help to showcase to Torontonians this technology and how it will be "subway-like" in service, something I think the non-transit nerds dont understand. They hear "go level expansion" and they think "oh great more diesel go trains." It would drum up interest.

Secondly they could work out any kinks or issues they encounter before they go on to electrify the more difficult parts of the network, like Union corridor, and figure out service level issues, EMU vehicle issues, etc.
A

^ It's this reason I find the transition to the branding of the project as 'GO Expansion' to be a mistake. It is an amorphous idea vs saying Regional Express Rail, Electrification, 15 minute 2 Way All Day.
Member since February 10, 2002
A

robmausser said:
Last I heard they were going to close Scarboro street.

Kitchener Line benefits from being an active mainline for much of its life, so much of the grade separations are done.

Its a common problem: the least used lines like Stouffville and Barrie, which were branch lines and almost abandoned, mean that the GO trains have basically complete dedicated tracks; but a ton of at-grade crossings because well, the lines were never used much to warrant separation in the past.

The biggest problem with 'subway like' service to Mount Pleasant, is that the tracks are owned by CN. No electrification allowed, and mixed freight.
Click to expand...

I wished they had pushed the frequent service to downtown brampton, and do the hourly service extended to georgetown, letting train buses have little to no traffic west of there to guelph. It would’ve also pushed the hurontario lrt to get to downtown brampton as well and we would have a seamless journey. Imagine Weston to Oakville for example, you’d either take the kitchener line to bramalea and then the 46, or continue to brampton, transfer to lrt, then transfer at port credit to oakville, all basically on rails and would be the most frequent option. Bramalea however is still a great interchange station and when this project is completed, this would help the 407 and kitchener buses be more frequent
R

anb said:
I wished they had pushed the frequent service to downtown brampton, and do the hourly service extended to georgetown, letting train buses have little to no traffic west of there to guelph. It would’ve also pushed the hurontario lrt to get to downtown brampton as well and we would have a seamless journey. Imagine Weston to Oakville for example, you’d either take the kitchener line to bramalea and then the 46, or continue to brampton, transfer to lrt, then transfer at port credit to oakville, all basically on rails and would be the most frequent option. Bramalea however is still a great interchange station and when this project is completed, this would help the 407 and kitchener buses be more frequent
Click to expand...

Brampton is on the CN portion of rail. The best they will get is hourly.

robmausser said:
Brampton is on the CN portion of rail. The best they will get is hourly.
Click to expand...

I wouldn't necessarily count on that. Hourly right now, sure. But once the third track is built at Brampton GO Station (some of the required steps to do so have been done or are underway, including the planned new bus terminal), that opens up a bit more possibilities - not electric 15-minute service in each direction, but definitely more trains than the hourly off-peak existing.

If a fly under/over could be built between Bampton and Bramalea stations, that would remove the crossover effect that exist today to allow GO to run 30 minute service once the 3rd track is in place.

At the same time, if a 4th track was place in the corridor between Georgetown and Bramalea with a pinch point at Brampton station, you could get 15 minute service. The corridor can support 4 tracks and will require fixing 2 grade crossing in Brampton. There are a few crossing west of Brampton and no idea how busy they are.

This will allow both CN and GO to have their own 2 tracks except for Brampton that they are out of each other hair. VIA will remain on the north side like it should for a long time.

You can get 4 tracks in at Brampton Station but require road closure and roads cut in haft since the plan now calls for tearing the office tower down. The 2 bridges will have to be rebuilt to support 4 tracks.

Its also time to rebuild Georgetown station and yard area that was to happen a long time ago.
Last edited: Sep 9, 2020
Due Time restriction, visit my site https://www.flickr.com/photos/drum118/ to see updated photos of projects shot the last few weeks since I don't have the time to post them to various threads.
See my videos on YouTube https://www.youtube.com/user/Transitdrum118

Toronto Davenport Diamond Guideway project takes next step as temporary diversion track gets up and running, construction can begin on the elevated guideway.