the lemur said:
That looks nice. Some parts really only need the connections to be formalized: the break in the Humber trail is quite short and just needs a continuation of the paved section, while the MGT is only temporarily (I hope) out of commission in connection with the reworking of QQW, and I think the Lower Don trail will connect to the Athletes' Village anyway, once the tunnel under the tracks is re-opened. Connecting the Don trail to the hydro corridor might be tricky, though, since the part where the Don and the railway pass under the DVP doesn't leave a lot of room.

But the fact that this would connect all the Pan Am sites is really quite clever. If the loop can be closed using the Finch corridor trail, even better. I just hope this idea doesn't get sidelined/iced due to endless studies and assessments.
Click to expand...

Still, big progress on this issue in the last 2 years. We can thank Rob Ford, oddly enough.
A

She was going SB on Duplex Ave, so she probably blew through the stop sign 40m north of Berwick Avenue at Anderson Avenue. Google Streetview

Duplex Ave. and Berwick Ave is probably where she was stopped.

Still, big progress on this issue in the last 2 years. We can thank Rob Ford, oddly enough.
Click to expand...

Yeah, it's not really ambitious if it's capitalizing on ongoing projects and trying to unify them under the PanAm banner.

I hadn't thought about the Humber Marshes bit - there's basically no option but to have an on-street route on part of Stephen Dr.

Agree about the Leaside Railpath - nice but it doesn't really connect to anything. The south end needs to link to Wilket Creek/Serena Gundy, but how would you extend it past York Mills?

Connecting Rosedale Valley to the Lower Don makes a lot of sense - it would also link to the trail that runs along the east side of Bayview from just west of the Brick Works.

I don't expect the Loblaws gap to be closed any time soon - I doubt Loblaws or the school there would go for it.

the lemur said:
Agree about the Leaside Railpath - nice but it doesn't really connect to anything. The south end needs to link to Wilket Creek/Serena Gundy, but how would you extend it past York Mills?
Click to expand...

We're just dreaming here right? I would like to see it continue alongside the Richmond Hill (Bala Sub) ROW, like the West Railpath. At Leslie, it could deke under the rail line and down into the Don Valley. Like this: 
The chair of Toronto councilâ€™s public works committee has come up with a way to prevent the Bixi bike-sharing company from swirling down the drain: let another company build fewer toilets.

Councillor Denzil Minnan-Wongâ€™s toilets-for-bikes brainwave was tentatively endorsed by the cityâ€™s transportation chief, Stephen Buckley, in a confidential report obtained by the Star. The proposal, Buckley says, could eliminate Bixiâ€™s $3.9 million debt and put the company â€œon solid financial footingâ€ for the government takeover he is recommending. â€œA few months ago, it looked like Bixi was on the ropes. But I found a solution that will sustain an important city program that seems to be very popular,â€ said Minnan-Wong.

How do you pay off a bike companyâ€™s debt by allowing a non-bike company to avoid building toilets? Follow along here. Bixi is close to breaking even on its day-to-day operations. But it cannot afford its debt payments, and the city is on the hook for the $3.9 million loan under a previous council guarantee. The city has an unrelated street furniture and advertising contract with Astral Media. Under that 2007 contract, Astral is supposed to build 20 self-cleaning public toilets. But the large, high-tech facilities are both difficult to place and expensive to build: they cost $450,000 each, Astral says. Only two have opened so far.

The 20-year Astral contract allows the city to â€œcash outâ€ of the toilets after 10 years â€” that is, force Astral to pay the city a certain amount of money in exchange for the right to not build the majestic thrones. Minnan-Wongâ€™s proposal: persuade the company to allow the city to cash out now, four years early, and funnel the proceeds to the Bixi debt. Huh, not normally a fan of Minnan-Wong, but I got to hand it to him, this is a pretty good idea.

Geeky techiness aside, those toilets are pretty useless, and I can't believe they cost as much as a house!
Fred S

Maybe it's a good idea, but DMW apparently can't do math for sh*t. 18 toilets at $450K is a lot more money than the loan guarantee.

Or maybe he's just using this as a Trojan horse to kill Miller's Europotty project, which was clearly a Communist plot!

Over on www.ibiketo.ca, there was a comment that linked to an article on bikeyface. The cartoon about a bicyclist trying to be accepted by a herd is a good one: I sometimes feel like I'm that bicyclist riding my bike at the side of a road.
[SIGPIC][/SIGPIC]W. K. Lis
B

I like the cartoon. This is definitely how it feels. Your life falls into the hands of the driver behind you.

On another note, freestyle biking in Toronto has become very good. There are all kinds of free riding spots in the GTA, including dirt ramps in the don valley and concrete parks in most major areas. Kudos to the city for giving youth a place to ride over the past decade. 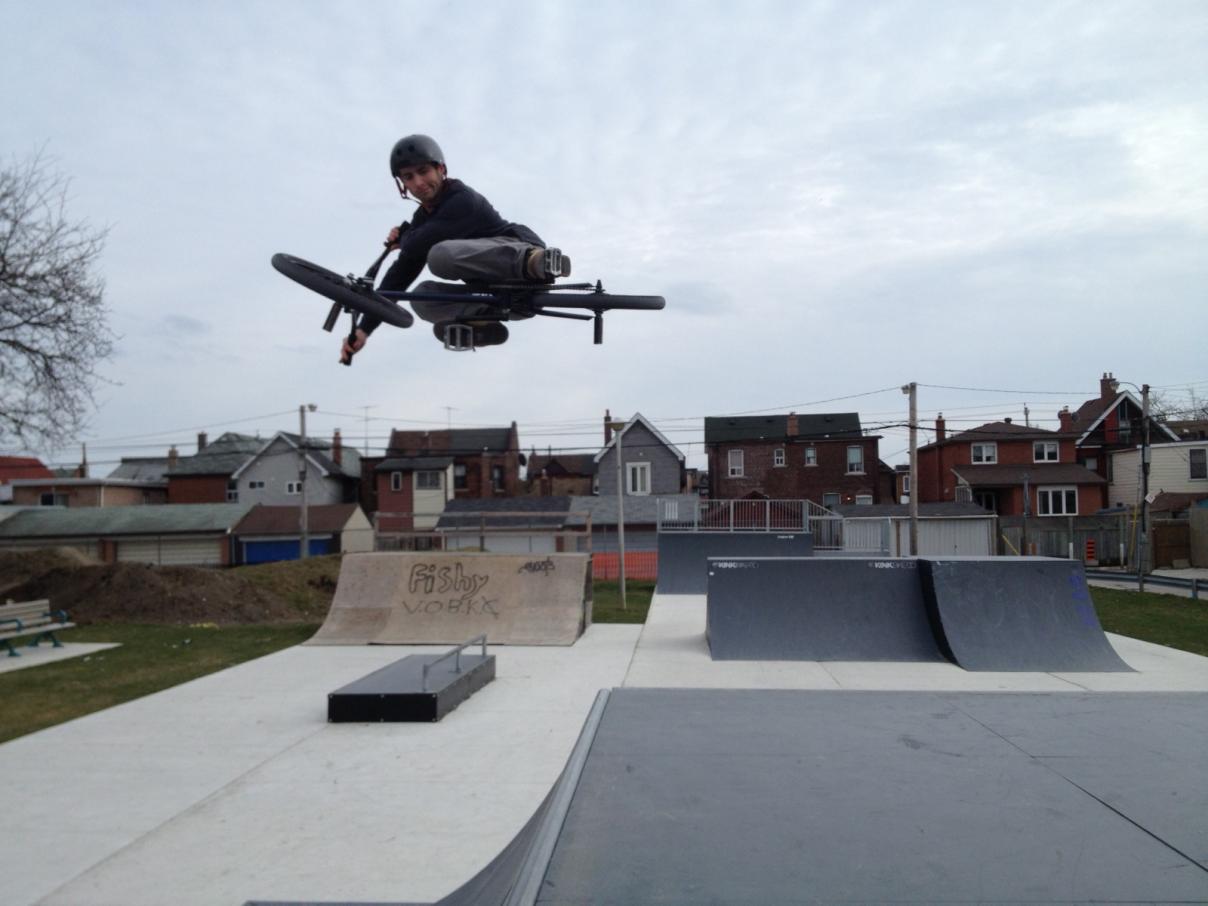 
In a 37-1 vote, Toronto city council has approved a multi-use cycling and pedestrian path that will connect Toronto from Brampton to Scarborough.

- To date, the path proposal has been met with widespread support. A June staff report recommended that city council approve the path initiative, calling it a highly visible project that would be used by hundreds of thousands of residents and tourists every year â€œfor active transportation and recreation purposes.â€ Several community members have spoken out in support of the path, urging city council to approve the plan. â€œThis project is simple, but truly powerful in its feasibility and impact,â€ Denise Pinto, operations director for Janeâ€™s Walk, said in a letter to the cityâ€™s executive committee last month.

- In addition to promoting active and healthy living, the path will connect residents, businesses and artists in seven of Torontoâ€™s 13 priority neighbourhoods, or Neighbourhood Improvement Areas (NIAs) â€“currently underserved in terms of economic opportunities, investments and infrastructure. These designated neighbourhoods are the focus of a city plan to â€œadvance equitable outcomes for all neighbourhoods,â€ through targeted investments in outdoor space and recreational facilities, and engaging local businesses and community groups in neighbourhood planning.

Who was the one miserable s**t who voted against it?

I can't even find it. Minutes with voting records will not be added to the documents for a while yet.

I don't think the PanAm trail being discussed is any of the above. My search-fu is weak.
Last edited: Jul 21, 2013