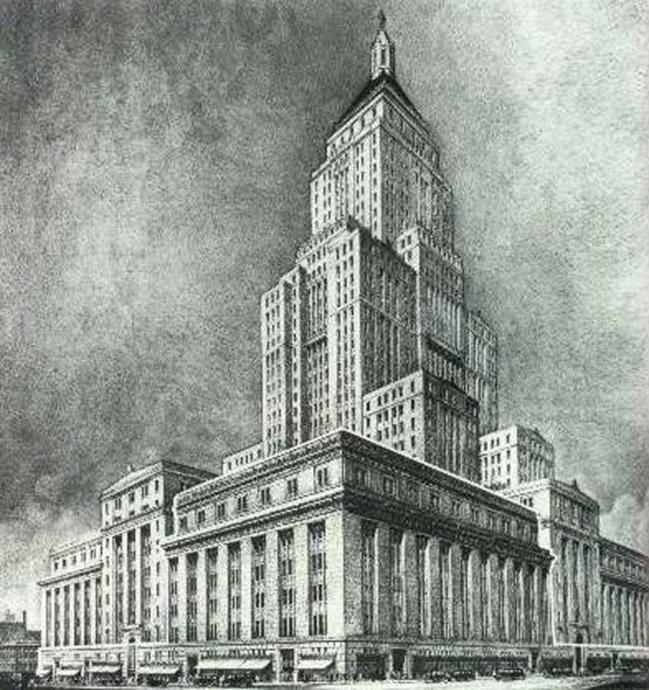 Cool diagram, it would be amazing if that were built. If you have the time it would be great to see Aura scaled against it to fully complete the block
Go big or go home......

wow! great sketchups, that'd be awesome if college park was completed, i love the flatiron look from bay street
come check out my photography!

love the College Park proposal! the triangular footprint and limestone(?) construction is eye catching and its orientation is well considered as it helps to set it back from the existing north ROCP building. But I guess we lose the existing office building... a hard sell for its owners I'd think.

Not as hot on your version of "Cathedral Square" . Its an interesting concept but perhaps it would work well elsewhere. The thing I love about 3D's version is that its a European piazza concept, bars and restaurants with with busy patios lining the edge of the square. The space blends more seamlessly into the fabric of the neighbourhood and delivers something that Toronto doesnt currently have...
L

CN: Neat proposal for a College Park skyscraper...I have always been interested in the College Park local area since I stayed at the YMCA (which was torn down to make way for the Toronto Police HQ) back in 1979-80...
I always found that building and the Subway-level mall interesting and with this new development the older building on Yonge Street is kept as I remember it...LI MIKE
F

Great rendering! The building would have the added benefit of being able to see any number of the protests at Queens Park. Having worked at Toronto General Hospital for a summer as a student, I can tell you that is always an exciting view!

I've done tonssss of work in Sketchup and Kerkythea.


SP!RE, if that was to be the next evolution of aA design at 501 Yonge, in a pair, with perhaps a different design on each tower, I would welcome it, providing that the design meets the street as nicely as yours does. This is a knockout. I love the use of colour, it is over the top and at the same time it is conservative. In fact I am jonesing.

Thanks guys! I have a lot more designs. I'll have to share them.

I've only been using SketchUp for less than a year, but I've had so many ideas build up over the years. I'm really flattered by your remarks!
[SIGPIC][/SIGPIC]

I don't think the design for the parking lot on Queen East, although nice, is practical.
This particular downtown pocket needs to increases its density, not decrease it. Compared to vibrant Queen West, downtown Queen East is half dead. We need to bring people there to bring the neibourhood to life. Given Moss Park is a stone's throw away and there is a large green space just in front of the church nearby on the east, it makes little to have another large park. It is simply not the best use of space. I would like something more commercial, such as a square, with nice cafes, restaurants (not generic chains) and boutique shops all around it, some sort of a statute/fountain in the middle. Restaurants can have their seatings outdoors, and street music performance may happen in the summer.

I personally think Queen East has a lot of potential that is yet to be fully developed.

I'd love to see you mock up a 'Soho Square' concept for the parking lot on Queen West beside the Black Bull. I could see this easily being one of the most popular public spaces in the city.
T

I am working on a development project for a non-profit collective and we could really use someone who is good at this sort of work (fantasy rendering). Until the project gets through council (we do have departmental support for the project) there really isn't budget to hire someone - but if there were someone who was willing to work on spec I'm sure they would enjoy being attached to this landmark community oriented project once its underway. Not a huge project but extremely unique for Toronto.

a fantasy rendering of a building i would like to see at the one younge site. a 330m office tower, and a 230m condo. i included all the current proposals and U/C's on the waterfront in the most accurate depiction i was willing to go to, for reference. i also used wylipoons ice condos model. i hope you don't mind!