There didn't seem to be an Emery Village thread anywhere. With the giant flag in the news I thought I would start discussion.

I don't understand why this giant flag pole is a project. It is not in a walkable area, it isn't enough of a draw by itself to actually have people go there unless something else is happening, and it is sandwiched in between a freeway, a Prayer Palace, and a hydro substation meaning the development opportunities are limited. This Flag Park uses up the land which should be developed as office space being close to the 400, on Finch West where the LRT is planned, and near the future GO station.

There used to be a condo neighbourhood planned at the corner of Weston and Finch which I think had a flag on the northwest corner of the intersection. What happened to that? It was one of those projects that would have kicked off redevelopment of the area in a much more significant way than a flagpole.

At least this area is being looked at. A new LRT line, an Emery Village GO station, a new road layout with a more human scale, and a new park. Hopefully the area finds a way to overcome the hydro corridor, freeway, hydro substation, Prayer Palace, and suburban warehouse district layout which is about as un-pedestrian as you can get.

Areas like this are interesting because in this era of both growing interest in cities and urban living and growing suburbia, places like Emery Village have a way of stagnating. It's hardly acceptable and they need to start growing and evolving into denser, more vibrant parts of the city.

The giant flag pole is a strange gimmick.
R

I am doing case study on Emery Village as part of my masters paper, so I've done a bit of research on this area already. Although the development at Weston and Finch fell through,I think that area is still slated for mixed use development in the future. I don't know how that will materialize considering that the corner now has a new apartment building on it (along with a gas station). There is also an ongoing development proposal slated for the southeast corner of the Weston and Finch intersection (at the site of the demolished Finch West Mall). Hopefully the Spadina Subway Extension- particularly the Finch West Station and LRT- will encourage more investment in the area.

I think that in order to properly urbanize the area into a more complete neighborhood, the industrial nature of the area should be embraced and taken into consideration by residential-commercial mixed use developments.
Last edited: Sep 9, 2010
E

Any updates on the status of the Public Square/flag pole project at Finch and Arrow?

Edllguy said:
Any updates on the status of the Public Square/flag pole project at Finch and Arrow?
Click to expand...

It's about as alive as Rob Ford's Woodbine Live!

Proposed Condo across from Casa.

Interesting. I couldn't find anything about this on the Development Application site. But it looks like they won't move ahead with the project anytime soon. From the report:

The owner has indicated he does not wish to finalize the Site Plan Approval at this time as he does not anticipate proceeding with the development in the near future.
Click to expand...

My guess is they're going to wait and see if the LRT actually gets built.

That makes sense, I also found this from Page 13:

Other Developments: The owners of the two apartment buildings located immediately west and northwest of the subject site (3400 Weston Road and 2405 Finch Avenue West) have recently approached the City with preliminary concept plans for the redevelopment of the these properties. These discussions are early in the process and any development proposal for these lands would be the subject of separate planning applications and approvals
Click to expand...

Quick google search shows Medallion owns those two apartments as well. Quite a bit of planning activity going on here, I think the LRT will help solidify development along this corridor. That may revive that other development at 19 Toryork Dr that went dead a few years ago.
Last edited: Oct 17, 2016


New 4.76 Acre community centre to be built next to the current St. Basil High School, replacing the current Carmine Stefano CC at Weston and Sheppard

Also looks like there is funding for redevelopment of Apted Park (Near Islington and Steeles) in the above.
Last edited: Dec 1, 2016
O

Starbucks and Wendy's to open in the new shopping plaza to be built at Sheppard and Weston road.

Looks like some damage control from the bad press coverage of the land deal at 400 and Finch. It appears they are still trying to make this happen, I think it would be good for the neighbourhood to see it come to fruition. 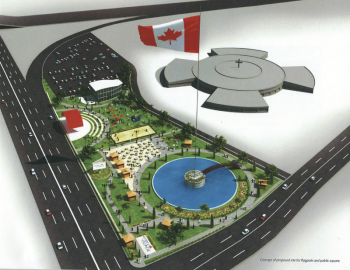 Nobody in the right mind should touch this file with a 100 foot pole before everything is resolved.

I agree to post #12. I don't understand why there are so many haters of this proposal. I live in south Etobicoke and would love to see this flagpole and amenities project happen. The number of tourists it would draw to the city would be incredible. Tourism dollars! Jobs! Helloooooo!

Is it a Canadian thing or way of thinking to put down proposals like this. Anywhere in the world where flagpoles like this exist benefit from an influx of investments into the local and broader community.

IMO the people being called out for wrongdoing on this file will be exonerated and we can get back to making a good vision happen for the benefit of the community.

Since when is an oversized flag pole a draw for tourists? This isn't even Mother Canada calibre.