Steve X said:
Let me improve that for you!
View attachment 204766
Volia, an extension from Science Centre to Sheppard, continue eastwards on Sheppard to STC instead of Sheppard/McCowan and the follow the SRT extension alignment to Centennial College and Malvern. The ultimate line that killed 5 birds with one stone.
Click to expand...

I know you're joking, but this still makes more sense. 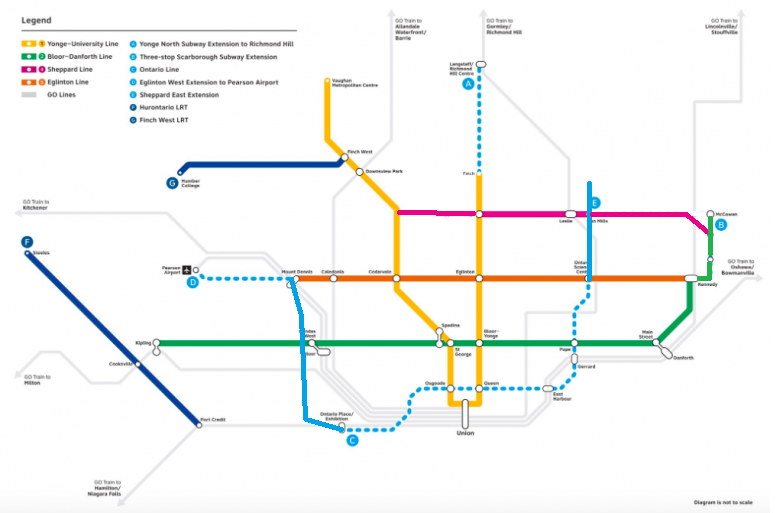 44 North said:
Anyone think it'd be a good idea for Eglinton West to be a completely separate line from Crosstown? Hear me out. We know the Prov now wants this to be fully grade-separated (ie a "subway"). But since it's connected to the rest of Crosstown the line wouldn't be a subway by default. This could actually be one. Two car trains. Sort of makes sense to do it this way since 1) Crosstown uses hefty low-floor vehicles designed for urban tram use. Not exactly a vehicle befitting of full grade-separation in the suburbs. And 2) Crosstown east of Kennedy is dead, all configurations. So the line is really a shell of its former vision with room to play around. Also full Crosstown stations would be 90m long, this would be half those lengths (less cost).

But there's more. Sauga has done some heavy lifting with Transitway grade-separation between Renforth and Hurontario. This could lead into that (one day), just needs a proper connection to Sq One. Also one day, a N/S subway of the same system running from Kipling to Pearson - this is integral to the vision and the reason I posted. It'd be an integrated network of smaller automated subways serving 427 corridor-East/West Mall, Pearson, Eg West, and Sauga. Be a bent cross shape, about 30km, four services: Sq One-Kipling, Sq One-Black Ck, Kipling-Pearson, Pearson-Black Ck. Drawbacks, yes. But huge benefit.
Click to expand...

That's an ineteresting concept; however, I still prefer a Crosstown extension to Pearson over a transfer at Mt Dennis.

1) A seemless connection from Toronto Midtown to Pearson will be very well used. Mid Etobicoke to the Spadina and Yonge subways will be popular, too.

In contrast, a seamless trip across the Mississauga / Toronto border, but ending with at transfer at Mt Dennis, will be of a limited value. Mt Dennis is not a destination on its own, and not a great transfer point for the trips between Misissauga and Toronto's downtown (yes you can take GO / RER from Mt Dennis to Union, but that's quite a detour if your origin is in Mississauga).

2) Eglinton West is the least certain part of the Ford's transit plan. They felt like they have to put something on the map in the west, since they got something for each of downtown (OL), the east (SSE), and the north (YN). Having done that, they might happily drag their feet and keep sparing the constructioin costs, until a new government gets elected and decides to revisit all plans that aren't fully under construction yet.

If revisited, Eglinton West might well return to the mostly-at-grade solution, in which case LRV is the only suitable vehicle type.

There are several condo developments already along Eglinton Avenue West in Etobicoke. Which make the LRT extension a great desire for the future residents.

See link for just the ones around Eglinton & Kipling.
[SIGPIC][/SIGPIC]W. K. Lis

Here's the link to the Toronto-Ontario Transit Update

In addition to information of the Ontario Line and the three-stop Line 2 extension, there is information on other transit projects. Here's the Eglinton West LRT extension info:

For context, over the next twenty years, the City's population is projected to grow by about 960,000 people. By 2041, the City's population will be more than 3,900,000, exceeding the Provincial Growth Plan forecasts by more than 500,000[1]. This growth will add pressure to Toronto's transit infrastructure, already in need of significant investment by all orders of government. The City and Toronto Transit Commission have identified state of good repair and growth needs totaling at least $33.5 billion as per the Toronto Transit Commission Capital Investment Plan. The Province, in announcing its investment in their four priority projects (i.e., Ontario Line, three-stop Line 2 East Extension, Yonge Subway Extension and Eglinton West Light Rail Transit), has estimated an investment of at least $28.5 billion. Taken together, this represents a more than $60 billion in transit investment, critical to maintaining the safety and reliability of the existing system and growing the system to meet mobility demands of the City and region.
Click to expand...

Based on the Ontario Line proposal, and the level of design completed to date in respect to the Line 2 East Extension (3-stop), the City and Toronto Transit Commission believe the projects as proposed have the ability to deliver positive benefits to Toronto's transit network, and are therefore supportable in principle. Both projects have elements that are similar to projects previously considered by Council and as such have the potential to bring similar positive benefits to the City, including contributing to the relief of Line 1. Further, both projects will enhance the transit network by providing new higher-order transit lines throughout the city including to equity-seeking communities. The City and Toronto Transit Commission have received limited information regarding the Eglinton West Light Rail Transit and the future plans for the Yonge Subway Extension to date and will continue to work with the Province to better understand the benefits of those projects.
Click to expand...

In summary, the Provincial proposal provides the following:
Click to expand...

...
- Funding for State of Good Repair Needs and Transit Expansion - The Province's proposal indicates that it would not seek capital contributions from the City for the Province's four priority expansion projects (Ontario Line, Line 2 East Extension, Yonge Subway Extension, and Eglinton West Light Rail Transit), in accordance with the commitment that the City will redirect the capital contributions it would have otherwise been expected to make toward incremental investments in the state-of-good-repair needs of the system, as illustrated in the letter attached from the Chief Executive Officer, Toronto Transit Commission, Rick Leary. The Province would also consider the redirection of these funds to investment in other transit expansion priorities identified by Council, based on a fully developed business case, and subject to credible progress to the relief of the state of good repair backlog in the subway system.
...
Click to expand...

As a required part of this arrangement, the City would redirect the funds it would have otherwise considered spending, on the Relief Line South, Line 2 East Extension, Eglinton West Light Rail Transit and Yonge Subway Extension projects toward the Toronto Transit Commission state of good repair backlog and other transit expansion priorities as determined by the City.
Click to expand...


- City staff have completed the Initiation and Development phase of the Toronto segment of the project, but Council has made no determination as to the preferred option for the Toronto segment.​
​
- Design is at an early stage with only a class 4 cost estimate, and a final design, including number of stops and potential grade separations has not been decided by Council. The staff recommended option of an at-grade Light Rail Transit in Item EX4.1 had a preliminary cost estimate of $1.8 billion.​
​
- Under the terms of the Agreement-in-Principle, Toronto would have been responsible for 100% of the capital costs of the Eglinton West Light Rail Transit for the Toronto segment, subject to agreement on the scope of the project between the parties through the stage-gate process outlined in the Agreement-in-Principle.​
​
- Capital contributions to Eglinton West Light Rail Transit are unfunded.​
Click to expand...

The Provincial proposal is based on the principle that each of the City and Province will be responsible for a proportional share of the required investment in state of good repair and expansion, representing an incremental investment in transit in Toronto. Below is a summary of staff's assessment of the minimum amount of City capital that will be redirected to incremental subway State of Good Repair and other City transit expansion priorities:

- $1.8 billion in unfunded capital contributions for the Eglinton West Light Rail Transit can be redirected once a funding source is identified.
Click to expand...

The Province has conveyed in their letters a nominal expectation of City contributions based on committed amounts to the one-stop Line 2 East Extension and the Eglinton West Light Rail Transit, as well as a 27 percent share of the current estimate for the Ontario Line and a pro rata share of the Yonge Subway Extension. The Province has communicated that they estimate this contribution to be approximately $6 billion.
Click to expand...

Walter this line is a go?!

sixrings said:
Walter this line is a go?!
Click to expand...

"$1.8 billion in unfunded capital contributions for the Eglinton West Light Rail Transit can be redirected once a funding source is identified. "
[SIGPIC][/SIGPIC]W. K. Lis

"$1.8 billion in unfunded capital contributions for the Eglinton West Light Rail Transit can be redirected once a funding source is identified. "
Click to expand...

The entire agreement makes clear that it will be funded from provincial coffers.

It's a go, but Metrolinx hasn't started work on it yet.
S

I thought the ttc chair said based on the Ontario line agreement they would have an additional 5 billion to spend.
A

sixrings said:
I thought the ttc chair said based on the Ontario line agreement they would have an additional 5 billion to spend.
Click to expand...

The province has let the City off the hook for its share of capital dollars for the Eglinton West LRT, Ontario Line, Scarborough Subway, and Yonge North Extension, under the assumption that the City will use money that was notionally allocated to those projects to SOGR and/or capital funding for other projects (in which the province would presumably not be involved).

Until we actually see shovels in the ground, it will be "pencilled in" only.
[SIGPIC][/SIGPIC]W. K. Lis
S

W. K. Lis said:
Until we actually see shovels in the ground, it will be "pencilled in" only.
Click to expand...

I wouldn't even know what plans they'd use as they studied everything in this corridor. I'm good with at grade in medium.

sixrings said:
I wouldn't even know what plans they'd use as they studied everything in this corridor. I'm good with at grade in medium.
Click to expand...

Except that Doug Ford lives in the Eglinton Avenue West & Kipling Avenue neighbourhood. He does NOT want to see the plebs in a rapid transit vehicle, if he drives by them in his SUV. That's why he wants to see (wrong term, should be "not see", but you get the gist) the Eglinton West extension underground, if he can.
[SIGPIC][/SIGPIC]W. K. Lis
C

^We’ve debated this at length before. You can be sure that Ford would lean to an underground solution, but there was lots of argument as to why an at grade solution might not be the best thing, at places anyways. The TTC proposal seemed willing to trade off things in the general direction of mediocrity, er, streetcar quality.

This is a case of Ford nudging the scales over the tipping point, sure, but the result might have landed there on its own.

I think we all know the answer why...

The last I heard it was only going to be underground from Royal York to Martin Grove. Which, if thats the case, I dont mind.

Those are 4 major intersections, and I could see the merit in full grade separation. 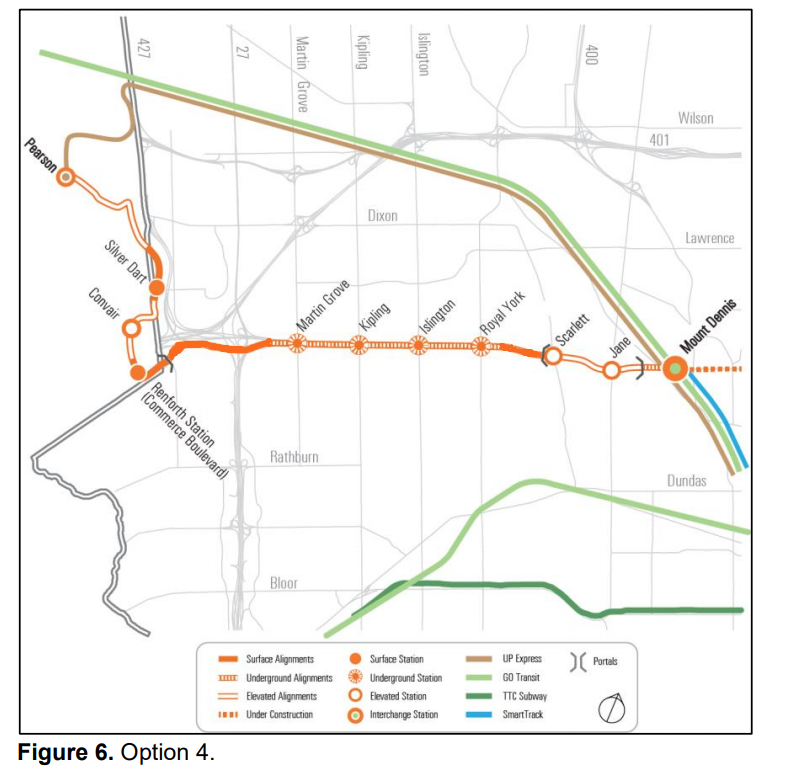 Basically a hybrid of Options.