I remember seeing something about using a knitted fabric as the basis for creating a concrete form. Essentially create custom-knit fabric to match requirement, assemble it on site with some rigid members to provide support/tension, then spray it with a light layer of concrete to make the form for a later pour. Seems like that kind of innovation would be useful compared to all this, or custom mill work.
Member since February 10, 2002
S

CaskoChan said:
Why was it mined? unlike the rest of the stations.
Click to expand...

A couple of the stations had so many sub-surface utilities that it was decided that it would be easier to not have to dig them up and reroute them. Instead they simply dig past them and underneath. Oakwood is one of them - Laird and Avenue are the others.

sche said:
Renders show bare concrete with some kind of white panel at the top, so...
View attachment 297996
Click to expand...

Neat little map of the operational readiness timeline for the ECLRT. 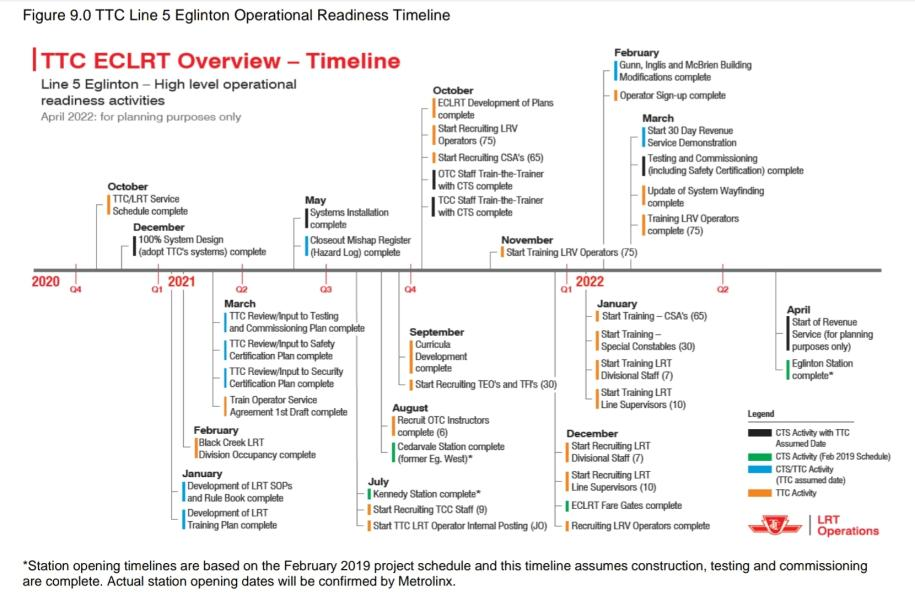 Coolstar said:
Neat little map of the operational readiness timeline for the ECLRT.

Hopefully someone will be able to find the TTC's SOP and Rule Book for how they will operate the Crosstown line. It will give us insight as to whether they intend to cripple operations in the same way they do with all the streetcar lines.
D

Hopefully someone will be able to find the TTC's SOP and Rule Book for how they will operate the Crosstown line. It will give us insight as to whether they intend to cripple operations in the same way they do with all the streetcar lines.
Click to expand...

Because the TTC is operating the vehicles they are following TTC operating procedures for the most part. I think where it will differ is how they run service during degraded operations such a power outages or accidents at intersections. Crosslinx gets paid based on service performance, so they have real incentive to provide reliable service in these situations (using turnbacks, reverse running over single-tracks if one track is down, skipping stations, etc.), versus the TTC who sometimes takes a conservative approach.

duffo said:
Because the TTC is operating the vehicles they are following TTC operating procedures for the most part. I think where it will differ is how they run service during degraded operations such a power outages or accidents at intersections. Crosslinx gets paid based on service performance, so they have real incentive to provide reliable service in these situations (using turnbacks, reverse running over single-tracks if one track is down, skipping stations, etc.), versus the TTC who sometimes takes a conservative approach.
Click to expand...

I'll absolutely lose my mind if they implement the slow down to 10 km/h at signalized intersection policy, amongst a few of the other idiotic ones current in the SOP.

Ive never seen that rule book but it really needs to be updated for the 21st century.
J

Thanks for linking the video although to be honest I do have some reservations about it. Maybe I'll remake it one day.

JSF-1 said:
Thanks for linking the video although to be honest I do have some reservations about it. Maybe I'll remake it one day.
Click to expand...

Oh I'm interesting in what those are now. I thought this video was quite reasonable?
My Life for Aiur!
J

ARG1 said:
Oh I'm interesting in what those are now. I thought this video was quite reasonable?
Click to expand...

It's mostly just a quality thing and maybe I would like to sit down a spend a bit more time mulling it over since I really made the video on a spur of the moment. That said my main gripe with the project remains unchanged, that being the fact it wasn't planned to go to Yonge Street and so to me at least made the line completely useless. For better or worse Yonge Street is Toronto's main north-south artery and so any "crosstown" line that doesn't connect to it is not necessarily doomed to failure as much as it is missing a great deal of potential ridership and utility. For example I do believe the Finch West LRT should go to Yonge Street at some point.

In regards to the Eglinton West line, a line to the Airport I fully support and even if the Eglinton West subway was going to be hilariously overbuilt for the area and make the Sheppard Line look like an act of fiscal prudence, at least if it connected to Yonge Street there could be some potential for growth. Yet for some reason someone decided it didn't need to thus cutting it off from everybody who uses Yonge Street (North York, Scarborough, and York Region). Also what gets lost in translation a lot is the fact that the original Network 2011 proposal didn't have the Eglinton West Subway being built until 2011 after all other projects were done; and instead put bus lanes on Eglinton in the interim. It ends up getting bumped up to the 90's (20 years ahead of schedule) because York wants there subway yet we can't afford to build both the Eglinton Line and Sheppard Line in full simultaneously and boom once you add in Mike Harris brand conservatism and you have the Eglinton West fiasco.
Last edited: Feb 5, 2021

I appreciate the play on words with "A ray of light" because they are traffic lights, but typically that phrase refers to when things are looking completely hopeless.

I'm not sure if thats the message Metrolinx would want to convey about this project, however accurate, haha.

Johnny Au said:
Not only is the T logo lame, it's obviously plagiarized.

Many transit agencies around the world have a very similar logo. The MBTA's logo is the exact inverse of Metrolinx's T logo.
Click to expand...

JSF-1 said:
Well Metrolinx not following there own guidelines is nothing new, need I remind you about their "Crosstown Naming guidelines" which they for some reason needed. Sure anybody could have just opened Google Maps to pick out station names, but why do that when we can piss away tens of thousands of dollars on know-nothing consultants who are just gonna tell us what we already knew! Hows about such wonderful names like "Aga Kahn Park and Museum"? Short and to the point right!!!! Can I interest you in some "Cedarvale (formerally known as Eglinton West)? Our guidelines said we won't rename existsing stations but by-god we did it anyway )))))!!!!!!!!!!!!! Or what about Sloane? everyone said it should be named Bermondsey but that sounded to "corporate". What does that mean? Hell we don't even know ourselves. METROLINX!! We make you loose faith in the idea of a unified Transit network in the GTA!
Click to expand...

EastYorkTTCFan said:
I don't really see how adding an extra symbol that tells no body anything will help make it easier to find a transit stop. Especially if Metrolinx wants to strong arm every agency in the GTA to follow along with it. Metrolinx created a problem that didn't exist by presenting it to people as a problem and then offered a solution to the problem that they created.
Click to expand...

1) There's a reason systems use the T and as per that video which was posted, the T was originally just the MBTA one as a placeholder, it was changed later.
2) They didn't use consultants, its been said many times - you are dunking on a basketball hoop which does not exist.
3) Hmm, maybe the professionals do see? I work in technology and do lots of user studies, as they said they talked to real people and asked them what the symbol represented and they said transit - I am not sure what the argument was, Metrolinx found the only 30 people in the entire GTHA who thought exactly the same thing at random? 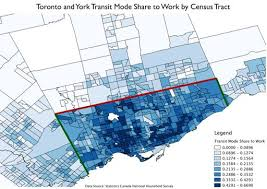 There is a reason that ridership falls of a cliff at the Toronto borders, now I can only assume you have never left the city of Toronto - but there are people there who "might" ride transit, in fact more people live there than in the city! The problem is none of these interacting transit agencies is properly integrated, so trips which one could very easily make in a car requires dealing with multiple agencies etc. if you don't know what the fare is or what route you need to take, or if the bus belongs to one of like 12 agencies then you might not want to ride transit. This is why we need to *fix* the wayfinding which is totally non-standard across the region. The obvious solution is one unified system but, as that would lead to a revolt Metrolinx has had to walk the fine line between unifying agencies and not stepping on their toes - they need to create a unified symbol which shows that all the transit agencies operate as a combined unit while not "taking away" their independence. Say you go to Waterloo, if the system was rolled out there right now you would see T signs on the GO Station and the GO Bus Stop but, not the LRT - hence you need a different fare card and cannot expect an integrated fare. When you get to Mississauga you immediately recognize the they have the T logo, which means you can easily transfer and use your Presto Card. MiWay's logo is still there because they operate the service and you are in or around Mississauga. To be clear wayfinding integration is not the biggest problem, and it's not the only problem - but it is a real one.
You must log in or register to post here.
Share:
Facebook Twitter Reddit Pinterest Tumblr WhatsApp Email Share Link