UT has written, briefly, about the wonderfully-named "Wellington Destructor" and there is lots more about it at: http://www.uerev.com/index.php?pid=wellington

Professional Services, Architectural Services
Description: Securing and Mothballing of the Wellington Incinerator: 677 Wellington Street
The Purpose of this RFP is obtain Proposals for the preparation of specifications and plans for the securing and mothballing of the property known as the Wellington Street Incinerator, also known as the Wellington Destructor, (hereafter referred to as the Incinerator) so as to halt its deterioration and prevent entry to the site by unauthorized personnel and animals, for up to 5 years. The Incinerator, located at 677 Wellington Street West is owned by the City of Toronto. The City is seeking a qualified Vendor with either direct heritage conservation experience, or supporting team members with direct heritage conservation experience to assess the condition of the structure, prepare tender ready plans and specification for the mothballing and securing of the structure, and to provide contract administration of constructors to undertake the tender packages.

The Vendor will also be required to provide all necessary services to ensure that all drawings and specifications are complete and ready to be tendered to a qualified General Contractor to complete the work according to the schedule set out herein. The Vendor will provide all Contract Administration services on behalf of the City until the completion of the project.

In addition to the securing of the building, there is extensive contamination on the site due to large volumes of garbage infested with mold, animal feces and other hazardous substances. All garbage will be removed and disposed under a separate contract prior to the mothballing of the building. The hazardous materials, including lead paint and asbestos on some mechanical parts, will not be undertaken at this time. The vendor will be responsible for ensuring that all personnel have adequate PPE for working on the site.

Although this project is not a heritage restoration project, the building is a listed heritage property and as such, the mothballing and securing of the property must be completed consistent with accepted conservation approaches, and The Standards and Guidelines for the Conservation of Historic Places in Canada.

It's a great building with a neat red-brick ramp that garbage trucks used to enter the building. The city built its incinerators to high standards--both in terms of construction quality and industrial architecture.

For the past decade, there was a homeless man who lived there. He must have been a hoarder--he filled the place up with all sorts of trash including dozens of abandoned and decayed bicycles and piles of old electronics. That link is worth a look.

'Post-apocalyptic' incinerator in Toronto to be transformed into community centre
Built in 1925, the garbage facility and its three smokestacks were a fixture of Toronto’s 20th-century skyline and remained in operation until the 1960s.

The Wellington Street destructor was created to tear things down, but the city is hoping the former incinerator can help build its neighbouring community back up.

Built in 1925, the massive garbage facility and its three towering smokestacks were a fixture of Toronto’s 20th-century skyline. The incinerator remained in operation until the 1960s, after the city switched to storing trash in landfills.

Now, city politicians and planners want to convert the building – and the 8,000-square metres of land underneath and around it – into something new.

A 2014 planning study by the city suggested the destructor could be adapted in the same vein as Wychwood Barns or Evergreen Brickworks. However, unlike those sites, the Wellington location is right in the downtown core.

“There really aren’t too many buildings like that in the area that the city owns and are currently vacant,” said city planner Graig Uens. “Whatever we end up doing there is going to be within walking distance of an awful lot of people.”

…which would be here: 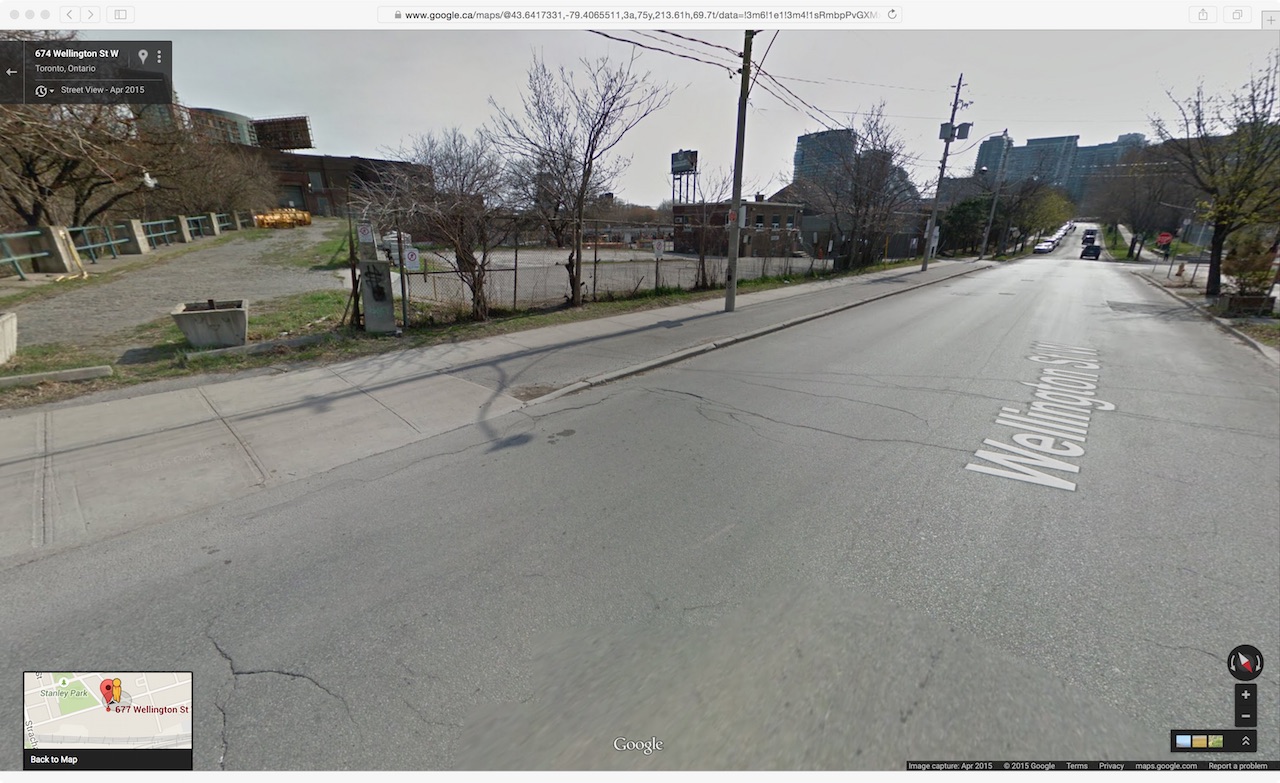 …so it's not "right in the downtown core", but it is close. Not like Wychwood is in the boonies exactly.

It would be a fine precedent for the preservation of the Symes Road Incinerator, an Art Deco landmark at the north end of the Junction that's currently derelict.

Mike Layton posted some photos on Twitter from his tour yesterday and they're worth a look: https://storify.com/nometa/west-end-destructor-best-name-ever-tour

This is one of my favourite derelict industrial buildings in TO, along with the old Canada Linseed Oil Mills building by Sorauren Park. They'd both make great community hubs in the Artscape vein.

Very interesting. Let's hope they coordinate with the new park going in next door as part of the Fort York ped bridge which is being designed by Claude Cormier. I'd love to see Claude on this project too.

The City has just issued a tender call:

Did anyone go to the design session yesterday?

The Destructor’s size and resilience would allow it to be used for practically anything: from the usual daycare, ESL, art and exercise classes to rental of spaces for “post-industrial industry” and for the heavier work that “makers” like to do. These might include fire-breathing activities – this really turned the judges on – like blacksmithing, which are hard to pursue in Toronto and would be appropriate for a former incinerator.

And the look of a revitalized Destructor? Suggestions ran from encouraging graffitists to decorate its walls to acquiring the former abattoir to the east, and incorporating its landscape into the Destructor complex. To compensate for the Destructor’s lost chimneys, new chimneys in lattice steel were proposed as mounts for temporary exhibits of art work that would be visible for kilometres around, day and night.
Click to expand...

rdaner said:
Did anyone go to the design session yesterday?
Click to expand...

Yes, our reporter Julian Mirabelli went. His report is up on the front page here.

Interestingly, the Wellington Destructor's younger cousin, the Symes Road Destructor, is now being restored and reused as a craft brewery. Both are designated heritage buildings from the early 20th century that were designed as garbage incinerators. So far, I haven't seen any references to the project at 150 Symes Road in any of the media content on the Wellington Destructor, even though they're similar buildings with similar challenges in terms of reuse.

The City of Toronto should be commended for designating 150 Symes Road and selling it to someone who would preserve it. Hopefully the people behind both projects and the city in general will learn from their experiences in bringing new life to these heritage buildings. They're distinctive structures. Our communities are better off if they can be restored and reused in ways that showcase the architecture and allow the public to visit them.
Last edited: Oct 8, 2016
J

Kinda of a shame though that smokestacks though are usually the first thing to be demolished when a building goes unused.

I think they contribute to the aesthetics of a building, and buildings like the Symes Road Incinerator look diminished without their smokestacks.

Kinda of a shame though that smokestacks though are usually the first thing to be demolished when a building goes unused.

I think they contribute to the aesthetics of a building, and buildings like the Symes Road Incinerator look diminished without their smokestacks.
Click to expand...

The City of Toronto will host a public consultation session on Tuesday, April 25 at St. Mary's Elementary School (20 Portugal Sq.) to collect input from residents on potential uses for an old building at 677 Wellington St. W. popularly known as the Wellington Destructor.

The Wellington Destructor was a large garbage incinerator inside a brick building. The structure was built in 1925.

Public participation is an important part of the process to determine the appropriate future uses for the building. Next week's public consultation, which will take place in the school gym from 6:30 to 9 p.m., will consist of information displays, a presentation by City staff, a panel discussion followed by a question-and-answer session and further opportunity for comment. An online survey is also available on the City's website for those unable to attend next week's consultation session.

The incinerator was in active use until the burning of solid waste was halted in the mid-1970s. At that time, the site became a waste transfer station for a period. The transfer station has been decommissioned for decades and today the site not being used.

The property was listed on the City of Toronto heritage register in June 2005 and is subject to heritage policies for its conservation. The brick building has been closed since 2005 to prevent further deterioration and was secured at that time to prevent entry.

The survey and more information about the consultation are available at http://bit.ly/2pD8hMh

This news release is also available on the City's website: http://bit.ly/2pgHxnU

Toronto is Canada's largest city, the fourth largest in North America, and home to a diverse population of about 2.8 million people. It is a global centre for business, finance, arts and culture and is consistently ranked one of the world's most livable cities. In 2017, Toronto will honour Canada's 150th birthday with "TO Canada with Love," a year-long program of celebrations, commemorations and exhibitions. For information on non-emergency City services and programs, Toronto residents, businesses and visitors can visit http://www.toronto.ca, call 311, 24 hours a day, 7 days a week, or follow us on Twitter at http://www.twitter.com/TorontoComms and on Instagram at http://www.instagram.com/cityofto.
Twitter: https://twitter.com/edwardskira
FaceBook: https://www.facebook.com/edward.skira
Instagram: https://instagram.com/edwardskira/
Linkedin: https://ca.linkedin.com/in/edwardskira
You must log in or register to post here.
Share:
Facebook Twitter Reddit Pinterest Tumblr WhatsApp Email Share Link