That would be a great trade.

Tucker Carlson will be very happy in Russia, given his fervent support for Putin.

While we're at it, we should ship Newsmax, OAN, and various alt-tech websites to Russia. Oh, and ship all the Freedom Convoy participants to Russia as well. I heard that their definition of "free speech" aligns very well with Putin's definition.

Oh, and Florida should exit the United States and become a Russian client state. After all, Governor Ron DeSantis admires Putin.

Marina Ovsyannikova will be very happy in the West, given her fervent opposition to Putin. 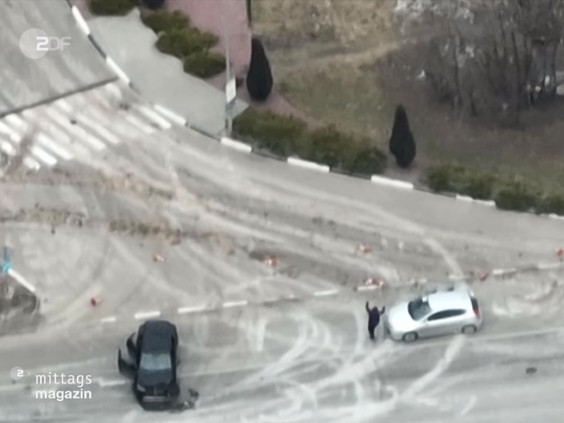 As the war in Ukraine continues, more stories of attacks against civilians are surfacing, including a motorist reportedly shot dead by Russian soldiers and civilians killed in line for bread.
Click to expand...

On Wednesday, the United States said Russian forces had shot and killed 10 people waiting in line for bread in the city of Chernihiv. It did not cite evidence of the attack and Russia did not comment on the allegation, made in a U.S. Embassy statement.
Click to expand...

The governor of Ukraine’s Zaporizhzhia region said Russian forces had fired heavy artillery at a convoy of evacuees from the southern port city of Mariupol, wounding five people. Ukraine’s military said children were among the casualties. Russia says it does not target civilians.

Video captured by a civilian drone shows a motorist in Ukraine being shot by a group of what appears to be Russian soldiers near Kyiv, according to an investigation by German publication ZDF Frontal.

A man can be seen getting out of a car and putting both of his arms up in the air before being shot and falling down.

The drone’s pilot, who calls himself Zanoza, told ZDF he wanted to defend his country as a volunteer.

“I was observing Russian tank positions on the road for some time,” he said. “The driver got out of the car, raised his hands and was shot by Russian soldiers.”
Click to expand...

The footage was taken on March 7, in an area west of Kyiv on the E40 expressway.

It shows a Russian tank in a field near a service station as two cars drive on the road.
Click to expand... 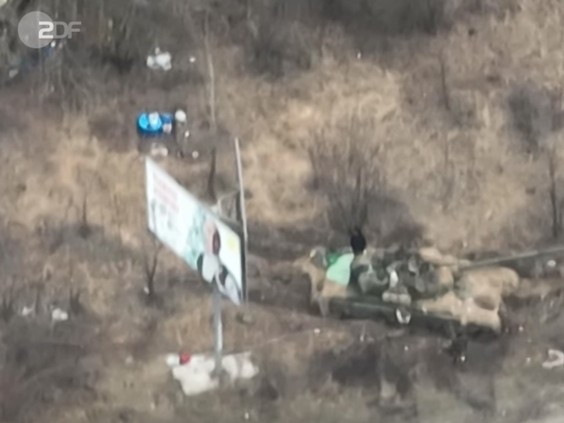 One makes a U-turn, perhaps spotting the tank, and drives off. The passenger in the other car turns the vehicle around, but instead of driving away, he gets out of the vehicle. He is then shot and falls in front of the car.

In another video clip, the body is dragged to the nearby field.

According to ZDF, a woman and child were also travelling with the man who was shot. They were taken into the field and their whereabouts are unknown. The footage does not show what happened to them. The car was later towed and burned.

The soldiers who ran to the car after the man was shot were identified as Russian by the white bands that they wore, ZDF reported.
Click to expand...

The publication said they verified the video’s authenticity using its time stamp and its location.

Since the Russian war against Ukraine began in late February, Russia has maintained that they are not killing civilians. However, more accusations continue to be made against them, especially after the bombing of a maternity hospital in Mariupol and reports of activists being targeted in Kherson.
Click to expand...

A Russian lawmaker made an outlandish demand over the weekend that the USA return Alaska and a historic settlement in California, along with paying reparations to Russia over crippling American-led sanctions which have put Moscow’s economic system in a tailspin.

Oleg Matveychev, a member of the state Duma, outlined on Russian state tv a set of calls for for the U.S. and Ukraine after Kiv’s “demilitarization is accomplished,” the Specific newspaper in the UK reported.

The calls for embrace the return of Alaska, which the U.S. bought from the Russian Empire in 1867 as a part of the Alaska Buy, and the previous Russian settlement of Fort Ross, California, 90miles north of San Francisco.
Click to expand...

“We ought to be occupied with reparations from the harm that was attributable to the sanctions and the conflict itself, as a result of that too prices cash and we should always get it again,” Matveychev mentioned throughout a Sunday interview.

He additionally referred to as for the “return of all Russian properties, these of the Russian empire, the Soviet Union and present Russia, which has been seized in the USA, and so forth.”

Afterward, he was requested if he meant Alaska and Fort Ross.

“That was my subsequent level. In addition to the Antarctic,” he mentioned. “We found it, so it belongs to us.”

The sale of Alaska marked the tip of the Russian Empire’s commerce growth and settlement efforts to the Pacific coast of the U.S., based on the State Division. The territory was bought to the U.S. authorities for $7.2 million.

Opponents of the sale labeled it “Seward’s Folly,” referring then-Secretary of State William H. Seward, who was a proponent of American growth.
Click to expand...

The label failed to stay after 1896 when a whole lot of 1000’s of individuals migrated to the territory looking for gold.

A Russian colony was established Fort Ross on California’s Sonoma coast in 1812. After a number of years of struggling to develop crops and tensions with Individuals within the space, the property was bought in 1841 after it grew to become clear the realm was a monetary legal responsibility, based on the Fort Ross Conservancy.

The calls for made by Matveychev are more likely to be ignored because the U.S. ratchets up sanctions on Moscow over its invasion of Ukraine. On Monday, the State Division introduced contemporary sanctions on President Alexander Lukashenko, the Kremlin’s ally in Belarus, and 11 different Russian officers.

“I might say, is that will not shock any of you, that none of us are planning vacationer journeys to Russia,” she mentioned. “None of us have financial institution accounts that we cannot be capable of entry. So we are going to forge forward.”
Click to expand... 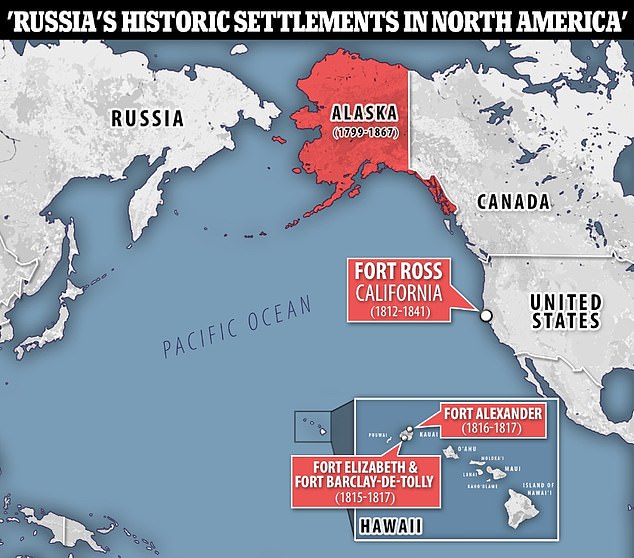 Russian state TV calls for REPARATIONS from the US over sanctions: Putin's lapdogs demand return of 'Alaska and California's Fort Ross', threaten nuclear strikes on US, and call for public hangings in Ukraine​

Pope to consecrate Russia and Ukraine to Immaculate Heart of Mary​

The consecration of Russia and Ukraine to the Immaculate Heart of Mary by Pope Francis will take place during the Celebration of Penance on 25 March in St Peter's Basilica.

Pope Francis will consecrate Russia and Ukraine to the Immaculate Heart of Mary on Friday, 25 March, during the Celebration of Penance that he will preside over at 5pm in St Peter's Basilica.

The Director of the Holy See Press Office, Matteo Bruni, said in a statement: “The same act, on the same day, will be performed in Fatima by Cardinal Konrad Krajewski, papal almoner,” who is being sent there by the Pope.

The day of the Feast of the Annunciation of the Lord was chosen for the consecration.
Click to expand...

Martyrdom of the good​

In the apparition of 13 July 1917, in Fatima, Our Lady had asked for the consecration of Russia to Her Immaculate Heart, stating that if this request were not granted, Russia would spread "its errors throughout the world, promoting wars and persecution of the Church.”

“The good," she added, "will be martyred; the Holy Father will have much to suffer, various nations will be destroyed."
Click to expand...

Consecrations of Russia to Mary​

After the Fatima apparitions there were various acts of consecration to the Immaculate Heart of Mary.

Pope Pius XII, on 31 October 1942, consecrated the whole world, and on 7 July 1952 he consecrated the peoples of Russia to the Immaculate Heart of Mary in the Apostolic Letter Sacro vergente anno:
Click to expand...

On 21 November 1964, Pope St Paul VI renewed the consecration of Russia to the Immaculate Heart in the presence of the Fathers of the Second Vatican Council.

Pope St. John Paul II composed a prayer for what he called an 'Act of Entrustment' to be celebrated in the Basilica of St Mary Major on 7 June 1981, the Solemnity of Pentecost.

In June 2000, the Holy See revealed the third part of the secret of Fatima.

At the time, the then-Archbishop Tarcisio Bertone, Secretary of the Congregation for the Doctrine of the Faith, pointed out that Sister Lucia, in a letter of 1989, had personally confirmed that this solemn and universal act of consecration corresponded to what Our Lady wanted: "Yes, it was done," wrote the visionary, "just as Our Lady had asked, on 25 March 1984".
Click to expand...

Too much war-mongering here. A resolution to the conflict will come surprisingly soon.

littlewill1166 said:
Too much war-mongering here. A resolution to the conflict will come surprisingly soon.
Click to expand...

Before or after winter?
L

Richard White said:
Before or after winter?
Click to expand...

If I said, it wouldn't be a surprise.

China is smart. Play both sides and be ready when post-war Ukraine needs financing and rebuilding.

Now if Xi (eleven?) flies into Kiyv next week I’ll eat my hat! They‘ve chatted before on bilateral mega projects.

Admiral Beez said:
China is smart. Play both sides and be ready when post-war Ukraine needs financing and rebuilding.

China knows that Russia is losing badly. Hell, even the general populus knows it.

They also likely know that Russia is bordering on war crimes and I doubt they want to be a part of that.

My guess is you will see them helping Ukraine more and more. However you spin it, China does what is in Chinas best interests.

They also likely know that Russia is bordering on war crimes and I doubt they want to be a part of that.

My guess is you will see them helping Ukraine more and more. However you spin it, China does what is in Chinas best interests.
Click to expand...

I suspect China cares about the ICJ as much as Russia does.

lenaitch said:
I suspect China cares about the ICJ as much as Russia does.
Click to expand...

This is true but nobody wants to be the next Mussolini or Hirohito.

They also likely know that Russia is bordering on war crimes and I doubt they want to be a part of that.
Click to expand...

For a country actively carrying out genocide with the Uighurs, I doubt talking to someone and even suporting someone who is committing war crimes is much of a stretch.
Last edited: Mar 17, 2022

DSC said:
For a country actively carrying out genocide with the Uighurs, I doubt talking to someone and even suporting someone who is committing war crimes is not much of a stretch.
Click to expand...

Nevermind being the historical ally of Khmer Rouge...